Note: This is Part 2. Part 1 (Washington to Lincoln) is here.

Last year, I published the post, The American Presidents—Washington to Lincoln.

Washington to Lincoln. Two superstars, bookending legends like Adams, Jefferson, Madison, and Jackson; the birth of the constitution; the expansion from 13 East Coast colonies to a huge nation stretching from the Atlantic to the Pacific; two foreign wars; and a fierce debate over the issue of slavery—all leading up to the sizzling climax of the Civil War and the abolition of slavery. It’s not for everyone—but I’d click the shit out of that headline if I saw it on Facebook.

This year, I’ve gone a different direction. I’ve created one of the least clickable headlines in the history of the internet. 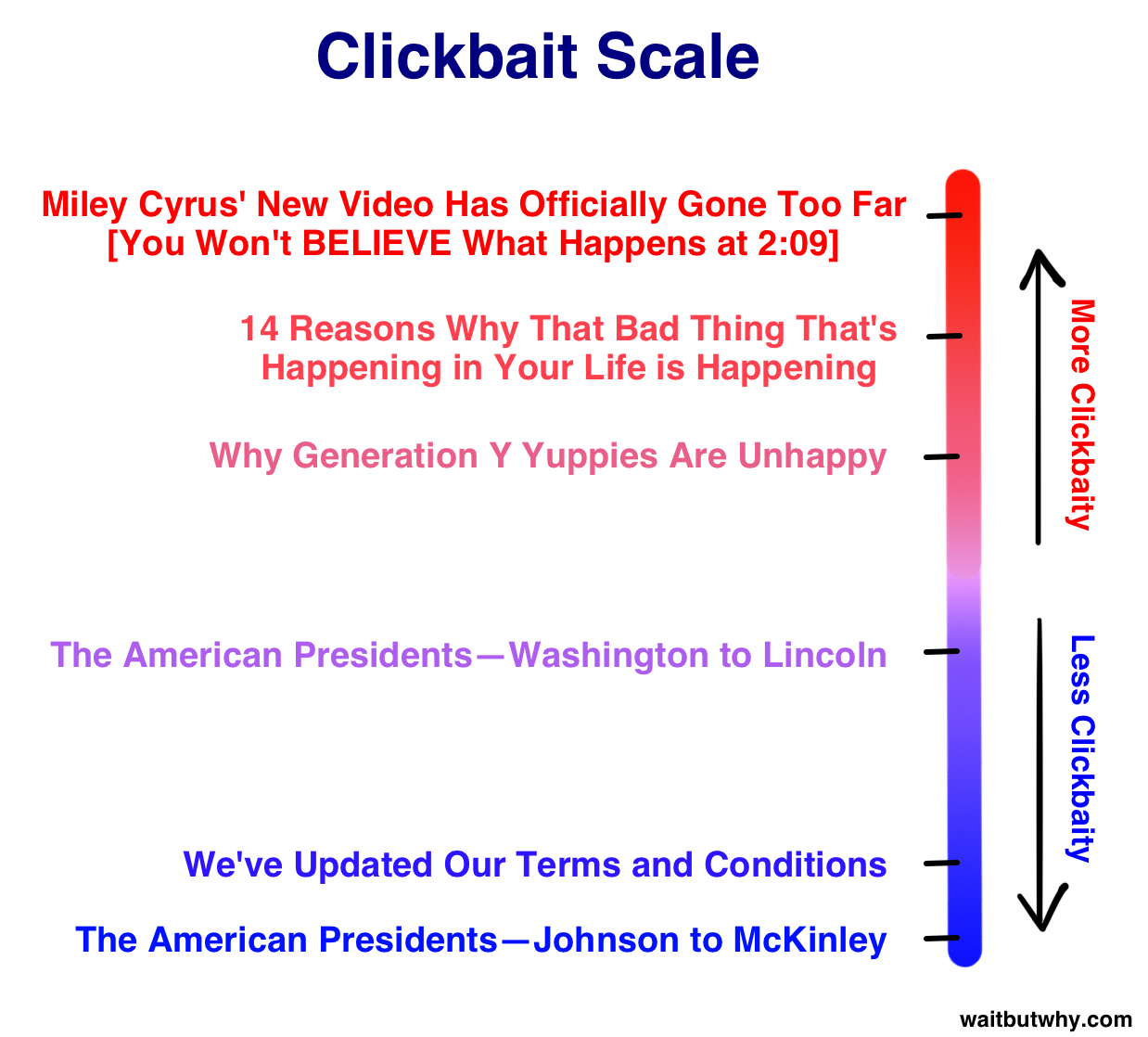 So forgive me if I’m a little confused why you’re here right now—why you’re voluntarily involving yourself in a piece of writing that will focus on Andrew Johnson, Ulysses S. Grant, Rutherford B. Hayes, James A. Garfield, Chester A. Arthur, Grover Cleveland, Benjamin Harrison, and William McKinley.

Maybe you clicked on this by accident while trying to click “Hide all posts from Wait But Why.” Or maybe, just maybe, you’re like me and you have a morbid fascination with this group of eight consecutive presidents who no one has heard of. Sure, you know a bit about Grant. You know Johnson was impeached. You might know Garfield and McKinley were assassinated. But unless you’re a history buff, that’s about all you know. I’m pretty into history, and that was about all I knew.

So I decided to dig in—way more in depth than I dug into the first 16—to the abyss between Lincoln and Teddy Roosevelt. Because if we’re gonna do this—we’re gonna really do this.

Three notes before we start:

You can see that after the political chaos of the first 16 presidencies (a time period which constitutes both what historians call The First Party System—up through Quincy Adams—and The Second Party System—from Jackson to Pierce), things settle down into a clean Republican vs. Democrat divide. The period we’ll cover in this post is 36 years long, running from the Civil War to the dawn of the 20th Century—a period Mark Twain first called The Gilded Age.1

The politics of this period are what historians call The Third Party System—and in this system, there are Republicans and Democrats, which sounds familiar, but those parties barely resemble those same two parties today. If anything, the Republicans of The Gilded Age may have more in common with today’s Democrats and the Democrats of that time may better resemble today’s Republicans (although of course, it’s blurry, and both parties back then contain a mix of the two parties today, as well as having certain characteristics that don’t exist today at all, which makes comparisons of then vs. now a bit of an apples-to-oranges situation).

As you can see on the chart, the Gilded Age Republicans, who made up most of the Civil War’s victorious North, largely dominated the era.

2) Here’s the chart that shows the aggregation of historians’ rankings of the presidents. Of course, even the aggregate ranks are totally subjective and not at all definitive—but I believe it’s the best way to give each president a ranking that reflects the general scholarly consensus on how the presidents stack up against each other. The aggregate column in that chart is where I draw my rankings from below each president’s name.

And how does this post’s group fare in the rankings? None of the eight presidents crack the top 18. What a crew.

3) This is a critical time to refresh yourself on the Mustache Era.

And now it’s time to buckle up and hold on tight as I take you on a whirlwind tour of eight of the most random men in the world. We start in April, 1865. The Civil War has just ended, Lincoln has just been shot, and the country is in total mayhem… 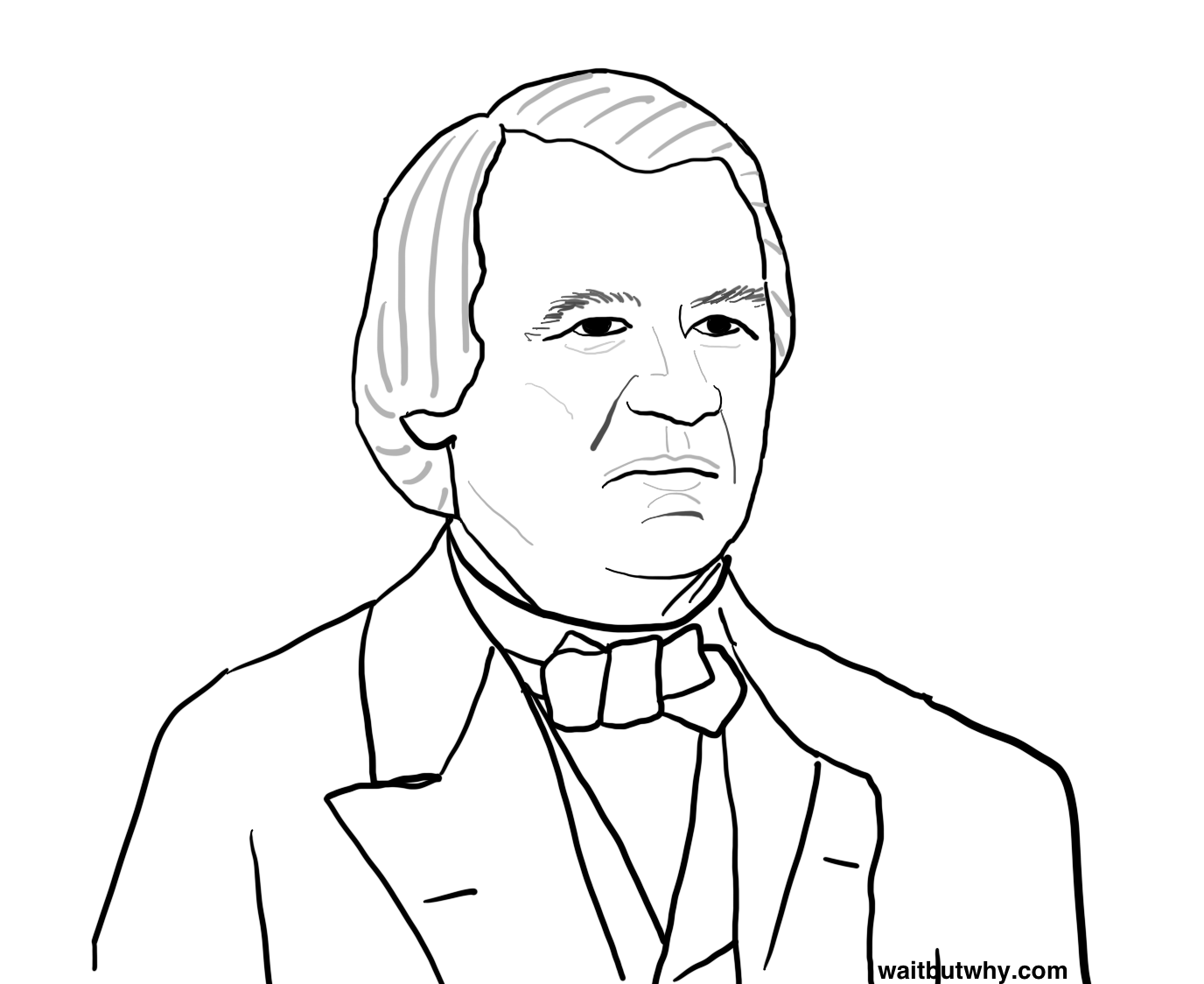 His Deal: Born in a super-poor log cabin situation in North Carolina, Johnson was raised by a single mom and apprenticed as a tailor before doing the most stereotypical politics ladder climb ever, going from city alderman to city mayor to state House to state Senate to federal Congress to Tennessee governor to federal Senate to vice president to president.3 Satisfying. Johnson capped off his epic journey by making the odd decision to stand on the top rung of the ladder being a dick for four years and followed that up by plunging all the way back down to the ground in disgrace. He spent the rest of his life losing small elections before finally winning a Senate seat four months before dying. Of his late-life Senate win, Johnson remarked, “Thank God for this vindication,” which was a weird thing to say since today he’s known as the third worst president in US history and mostly just comes up as the answer to the pre-1998 trivia question, “Who is the only US president to be impeached?”

His Presidency: Johnson was chosen to be Lincoln’s running mate in 1864 (before Lincoln’s second term) because he was a rare combo: a politician from the South (Tennessee) and one of Lincoln’s rival Democrats, but one who was also fervently pro-Union and anti-secession—this made him the perfect choice to help Lincoln win the election and send the message of cross-party and cross-region collaboration and national unity. Six weeks after winning the election, Johnson and Lincoln held their first and last meeting as president and vice president, because that night, Lincoln was shot.

New President Johnson inherited a nation that had just come out of Civil War. The smoke was still clearing and the plan had been for Lincoln to spend his second term making a trillion critical decisions for the future of the country. With a clear winner to the war, and one party, Lincoln’s Republicans, in an unusual position of power, it was a rare opportunity to reshape the nation for the future and finally shed off the conflicts of the past, like slavery, that had plagued the country since its beginning. And Lincoln would really have been a great person to do that.

Instead, the hypercharged Republicans were suddenly led by a Southern Democrat, who it turns out didn’t really agree with much of what Lincoln had planned to do for the post-war Reconstruction effort. Johnson spent the next four years doing everything he could to get in the way of major Republican progress. The Republicans wanted to be tough with the South, punishing prominent Confederate politicians and refusing to offer reconstruction aid until Southern states agreed to grant equal rights and citizenship to newly-freed slaves—but Johnson vetoed most of the bills that the Republican Congress tried to pass, including the Civil Rights Bill, arguing that it gave “a perfect equality of the white and black races in every State of the Union.” He wrote, in a letter to a governor, “this is a country for white men, and by God, as long as I am President, it shall be a government for white men.” Lincoln would have been proud.

The Republicans, who despised Johnson, successfully impeached him in 1868, claiming he had acted outside the president’s legal boundaries on several occasions—and at his impeachment trial, they fell one vote short of ousting him from office. The next year, he got crushed in his own primary and never even had a chance to run for a second term.

Johnson’s presidency ties with Buchanan’s for most maddening to read about.

Last Words: After having a stroke and falling off his chair: “My right side is paralyzed. I need no doctor. I can overcome my troubles.” He couldn’t.