President’s Day is one of those weird American holidays where no one quite knows why it’s there or what it is, but it’s a day off so no one asks too many questions.

In any case, it seemed like the perfect time to research presidents for 60 hours and post a 7,000-word, 30-hour-late post diving into who each American president really was and what he really did. (My apologies to all non-American readers—you did nothing to deserve this.)

In deciding where to start, I looked at the whole line of presidents, and it turns out the story of the United States divides cleanly into three even parts, each 75 years long:

I’d like to eventually go through all 43 American presidents, but for today, it made perfect sense to start out with the first and most unstable part of US history, the one bookended by the two birthday boys, Washington and Lincoln, and the section during which the country’s borders, laws, principles, and national identity were all still forming. Let’s call it the “Shaping the Nation Era.” This era was a time when major precedents were being set with every new administration, allowing the 16 presidents discussed below to shape the nation in a deeper way than anyone today could have the opportunity to.

Here’s a chart depicting the results of every election and how the political parties have shifted over time, further exemplifying how much more chaotic the Washington-Lincoln years were than the rest of US history:

Before we get started, eight general thoughts I had during my research:

And never before or after this era did any other president have a mustache.

I call it The Bad President Circus, and we’ll cover most of it today. Below is a chart showing just how dire this period was. Each square represents one of the 44 presidencies, in order (so Washington is all the way on the left and Obama is all the way on the right). The red squares represent the bottom 10 ranked* presidents:

Starting with William Henry Harrison and ending with Ulysses S. Grant, The Bad President Circus is a run of ten presidents that include eight of the bottom ten in history. A grim time.

4) It’s crazy to me that each of the most famous presidents has at least one parent who has no idea their son turned out to be anything special.

Thomas Jefferson’s dad died when he was 14.

Abraham Lincoln’s mom died when he was 9.

It turns out that this is more the rule than the exception—of the most recent 10 presidents, only JFK and George W. Bush have two parents who know they raised an American president. The concept blows my mind.

5) A president’s “last words” is a funny phenomenon. I included the below presidents’ last words whenever they were known. They’re mostly poetic and grand, clearly having been planned in advance and thought through carefully. The funny thing is picturing a president lying on his deathbed, surrounded by family, and his entire mind focused on when to say the key “last words” sentence. If he says it too early, he then has to not say anything again and that gets awkward if someone asks him a question or he lives a couple more days (this may have happened to Jefferson, as you’ll see). If he waits too long, he dies without saying the correct last words. One final quandary to deal with for these men who worked so hard to shape their historical legacies.

And some thoughts specifically on the first 16 presidents:

6) People were obsessed with dying back then. Learning about these 16 men, their families, friends, and contemporaries, it’s astounding how much easier it was to die just 200 years ago in the US. It seems like children had no more than a 50% chance of making it past age five, and once an adult hit 50, something like catching a cold or eating spoiled food could very well mean you were dead five days later. Tragedy was a much more prominent part of life in those times.

7) Books were everything. Many of these early presidents received some or most of their thorough educations from reading books on their own. It’s a reminder of how groundbreaking the invention of the mass-produced book was. Until then, the only way to learn something was through having a human explain it to you in person. The book allowed a hungry learner (which these 16 guys almost all were) to take things into their own hands and absorb the thoughts and knowledge of thousands of other people’s brains. And looking at it from the other side, it allowed someone like Abraham Lincoln to publish the Lincoln-Douglas debates and transmit his thoughts on slavery to tens of thousands of people throughout the country, as if each book were a mini-version of him and he could suddenly be everywhere at the same time.

8) The story of the first third of the nation’s history can be pretty well summed up with one sentence:

Aggressive (and controversial) expansion of United States territory exacerbated the nation’s tensest and most divisive debate—slavery—by forcing the question of whether the new territories should be able to self-determine whether or not to allow slavery, highlighting the haziness around where state rights end and federal power begins and accelerating the nation toward Civil War.

Sure, there were debates about the National Bank and tariffs, over the treatment of Native Americans and dealings with Europe, but most of the major issues these 16 presidents faced were contained somewhere within that italicized sentence.

*A note on rankings: The presidential ranking I used for each president both in the chart above and below each portrait was taken from here, which averages out a large number of polls taken over time and spanning the political spectrum.

And off we go— 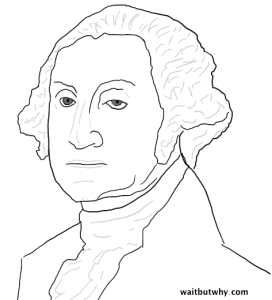 His Deal: A man’s man. No high school, no college, no law school, just a lot of manly prudence and wisdom. A key officer in the French and Indian War and the head general in the Revolutionary War, he was the only person everyone trusted to handle being the first president responsibly. And for good reason—after winning the Revolutionary War, he resigned as commander-in-chief rather than seize power, and when he took the office of President, he made sure not to act like a king or dictator, limited himself to two terms, and left office with a peaceful transition of power—setting these as key precedents for the future of the country. He’s one of those people Americans aren’t allowed to say anything bad about.

His Presidency: A generally peaceful time, although he had to deal with Alexander Hamilton and Thomas Jefferson, his two key cabinet members, having tantrums at each other over differing views of policy the whole time. In his farewell address, he cautioned against the evils of partisanship and the dangers of getting involved in foreign wars—Americans have heeded those words and to this day, we remain a nonpartisan country that never gets involved in unnecessary wars abroad.

Last Words: “Tis well.” Washington was too cool to give a shit about last words. 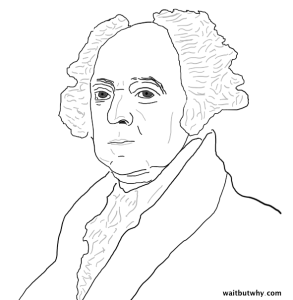 His Deal: A short, fat, highly educated intellectual whose philosophies on government played a critical role in the founding policies of the nation. His drafting of the Massachusetts Constitution in 1779 provided much of the thought and structure for the eventual American Constitution, and he was on the committee that drafted the Declaration of Independence (and was the original man chosen to write it before he passed the honor on to Thomas Jefferson). He was also the one who nominated George Washington to be commander-in-chief and John Marshall to be Supreme Court Chief Justice, both of which turned out to be brilliant moves.

His main issue was that he wasn’t one of the cool kids. Most of the founding fathers were quiet, dignified Southerners, and they didn’t particularly like or embrace Adams, or invite him to their birthday parties. He spent his whole life frustrated about this, and it really did matter—with a larger circle of powerful friends (Washington was one but he died right after his term ended), he might have had more support when he was the president, accomplished more, been elected to a second term, and be on Mount Rushmore and the ten dollar bill today.

His Presidency: Adams’ presidency had some successes, like preventing a war with France when many were urging him to fight, but he spent most of his time in office with Hamilton and Jefferson yelling in his face from both sides of the aisle. He received little support from either the Democrat-Republican Party or his own Federalist Party, and was ousted after one term (joining his son as the only two one-term presidents of the country’s first 50 years).

Last Words: “Thomas Jefferson survives.” Kind of embarrassing to talk about another president in your last words. 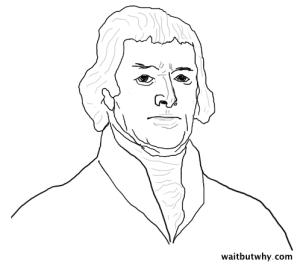 His Deal: A dignified, highly respected, possibly dickish member of the Virginia elite, Jefferson was profoundly intellectual and knew and did basically everything—on top of his political achievements, he spoke four languages, studied zoology, architecture, botany, religion, law, history, literature, and the violin, and invented both the swivel chair and the folding ladder. Jefferson was one of the major architects of the new country and founded an entire philosophy of governing followed by successors like Madison and Monroe.

His Presidency: He did some major things, most of them in his first term, like presiding over the outlawing of the importation of slaves (but owning and trading slaves inside the country were still okay) and sending Lewis and Clark out to explore the West. But his crowning achievement was acquiring the entire middle of the country from Napoleon’s France for $15 million ($234 million today, or 42 cents/acre) in the Louisiana Purchase: 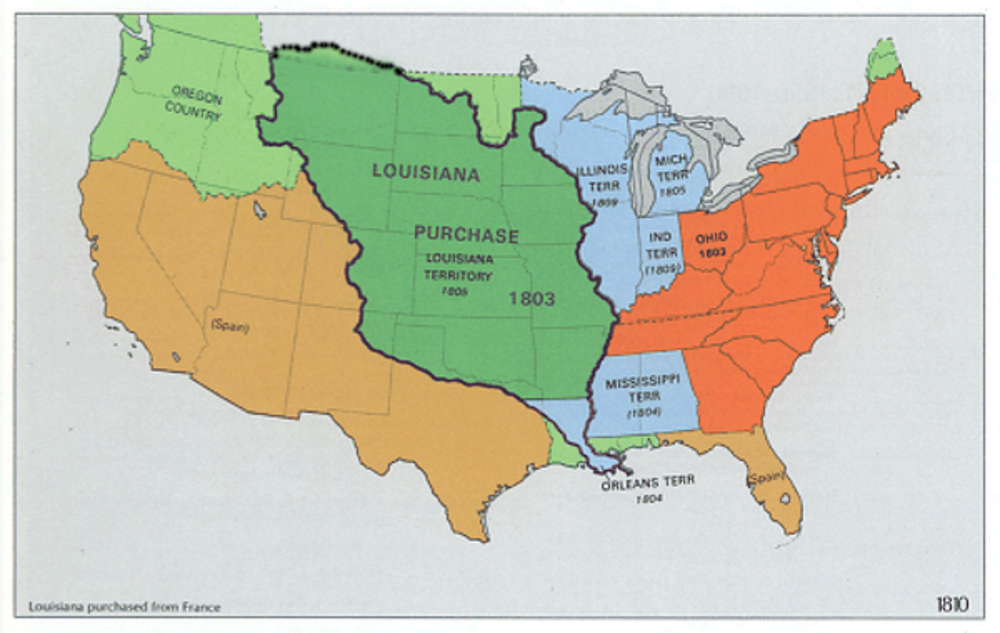 Last Words: “Is it the fourth yet?” This wasn’t his plan. He said his desired last words a few hours earlier:

I have done for my country, and for all mankind, all that I could do, and I now resign my soul, without fear, to my God, – my daughter to my country.

But then instead of dying like he was supposed to, he woke up one more time, forgot that he wasn’t supposed to talk, and asked the date. Then he died, and now his last words are forever, “Is it the fourth yet?” 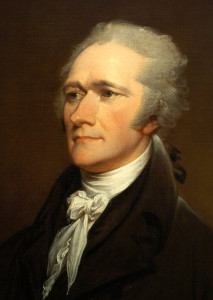 No wait, he wasn’t a president, so stop thinking he was. 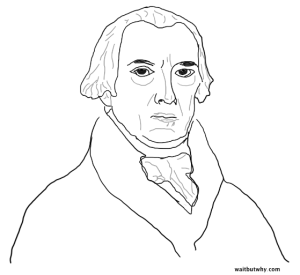 His Deal: At an adorable 5’4″ and 100 pounds, Madison is our pixie president. His greatest achievements happened before his presidency, when he was considered the most influential thinker behind the drafting of the Constitution and Bill of Rights, granting him the nickname “Father of the Constitution.” He was then one of three authors of The Federalist Papers, a series of articles building support for ratification of the new Constitution.

His Presidency: He began his presidency continuing the policies of Thomas Jefferson, but soon got wrapped up in the hideous War of 1812 with Britain, which the US lost (there are differing views on this, and a bunch of commenters have suggested that the War of 1812 a tie. It depends whether you think the US was secretly trying to take Canada or not—if so, they lost).

Last Words: “Nothing more than a change of mind, my dear. I always talk better lying down.” (In response to a niece asking him what was the matter)