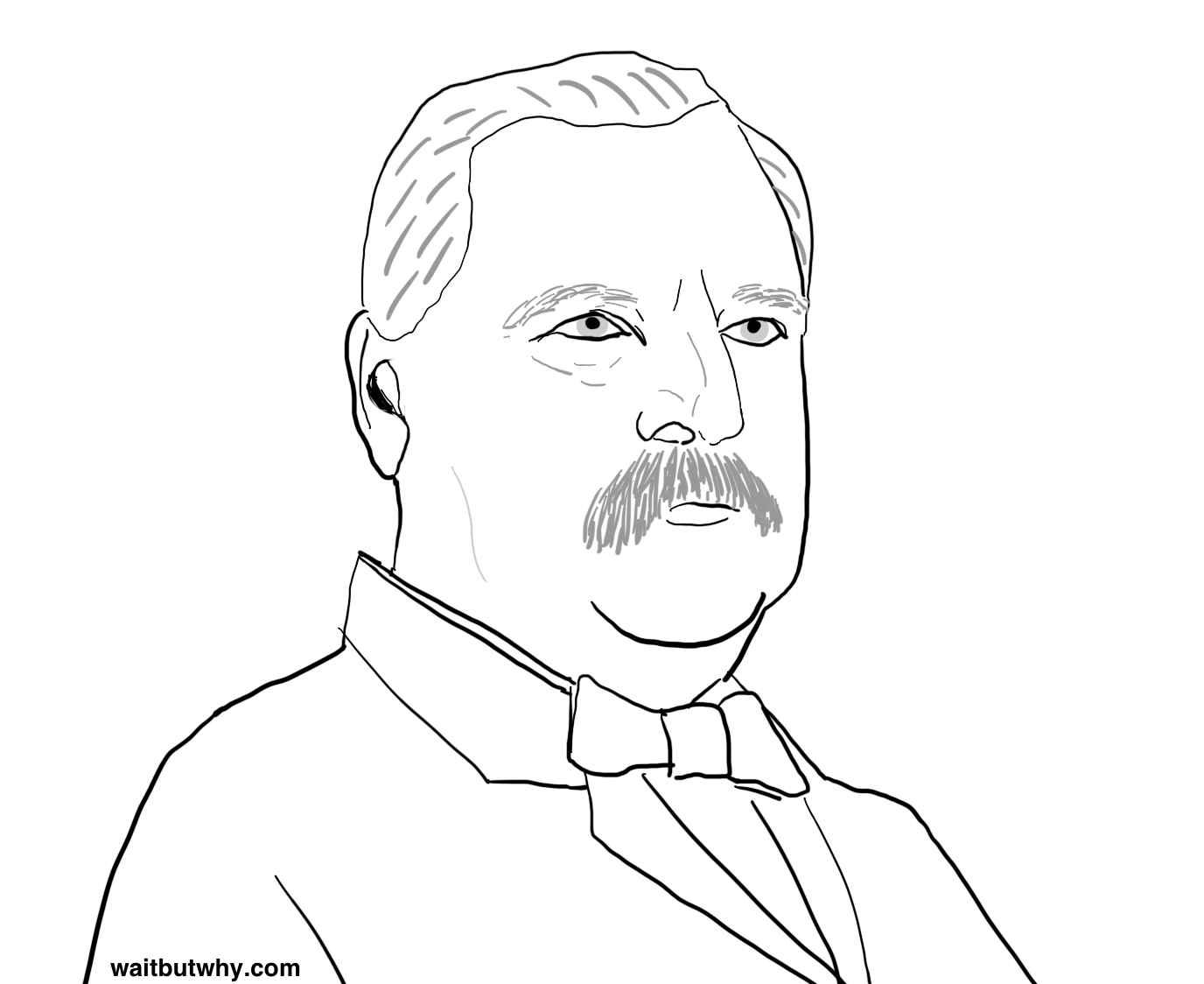 His Deal: Our most walrussy president, Grover Cleveland is an anomaly in his era for two reasons:

1) He’s the only Democrat to be elected president during an otherwise completely Republican-dominated half century. No other Democrat would win the presidency between James Buchanan in 1857 and Woodrow Wilson in 1913.

2) He’s the only president in the 50 years between the end of the Civil War and Roosevelt’s 1905 election to not have fought in the Civil War.

This remarkable feat by Cleveland is especially surprising, given that for most of his life before becoming president, he didn’t really have either political ambitions or an impressive resume.

He grew up in New York with little formal education, and at the age of 18, without much of a plan, decided to head west. His first and last stop ended up being Buffalo, where his uncle offered him a clerical job and introduced him to some of the important people around town, including some law partners, who offered him a clerkship. While working at the law firm, Cleveland taught himself law, eventually started his own practice, and was later appointed assistant district attorney of Erie County. This was during the war, and instead of fighting, he paid a Polish immigrant $150 to serve in his place so he could focus on his job and not get shot in the face.

Then, at the age of 33, he campaigned to become sheriff of Erie County and won, and he did that for about a decade. On two occasions, he sprung the trap at a hanging, making him the only US president who was also an executioner. Otherwise, his years as a sheriff were described as unremarkable.

At this point, it’s 1881, he’s turning 44, and he’s living an upstanding, respectable, but pretty ordinary and undistinguished life. So how is it possible that four years later, he’d become the one Democrat in the era of Republican dominance to take the presidential oath?

Well in an era when powerful and corrupt political machines were gaining more and more control, it happened to be the perfect setting for an unflashy, highly honest, fervently anti-corruption guy to shine. Cleveland didn’t know it then, but he was the exact right guy to get into politics at that exact time—and it so happens that Buffalo’s Democrats were looking for a reputably honest guy to run for Mayor that year and approached their sheriff about making a run for it. He accepted and won.

As mayor, Cleveland did what came natural to him after ten years as a sheriff and cracked down on corruption, unafraid to take on powerful business interests. The country was thirsty for this kind of character and his reputation quickly spread beyond Buffalo throughout greater New York. Two years after becoming mayor, he was New York’s governor.

Continuing to dismantle corruption and irk the political machines, Cleveland’s popularity soared in New York and he was seen as a new star in the party. When it came time to select nominees for president, the Democrats’ first choice (the guy who played Gore in the Bush-Gore-esque election of 1876) turned down the offer, and Cleveland ended up as part of a group of second-tier options. For various reasons, each of those options had something in their past that hurt their chances of winning—except for Cleveland, who had no past record because he started being a politician eight seconds ago. Cleveland got the nomination, and during the campaign, the Democrats focused on the corrupt record of his opponent, James Blaine. Honesty was the key quality for voters in 1884, and four years after reluctantly agreeing to run for Mayor of Buffalo, Grover Cleveland became the 22nd US president.

His Presidency: Cleveland’s presidency stood in sharp contrast to the series of those before it, as he opposed a number of the more progressive measures the Republicans had been working on for the past few decades (though he aligned with his predecessors when it came to civil service reform, which correlated with his leanings against corruption).

One major issue he dealt with was the fight over whether American money should only be backed by gold or by both gold and silver—Cleveland, along with most northeast politicians, adamantly opposed silver backing, while those in the south and the west stood in favor of it. Really old-fashioned issue that kind of bored the shit out of me to read about.

Cleveland saw Reconstruction as a failed experiment and lacked the previous post-Civil War presidents’ desire to heavily involve the White House in ensuring black voting rights in the South. He also departed from past presidents by firmly opposing anything resembling foreign expansion or imperialism.

In a bunch of instances, Cleveland’s philosophies on government really reminded me of today’s Republicans, emphasizing that this era’s Democrats and Republicans are in many ways more like the other party in today’s politics. For example, when there was a Texas drought that hurt the crops of farmers there, Congress allotted $10,000 to buy seed grain to help them recover. But Cleveland vetoed the expenditure and explained why like this:

I can find no warrant for such an appropriation in the Constitution, and I do not believe that the power and duty of the general government ought to be extended to the relief of individual suffering which is in no manner properly related to the public service or benefit. A prevalent tendency to disregard the limited mission of this power and duty should, I think, be steadfastly resisted, to the end that the lesson should be constantly enforced that, though the people support the government, the government should not support the people. The friendliness and charity of our countrymen can always be relied upon to relieve their fellow-citizens in misfortune. This has been repeatedly and quite lately demonstrated. Federal aid in such cases encourages the expectation of paternal care on the part of the government and weakens the sturdiness of our national character.

At the end of his term, Cleveland sought reelection and beat his opponent, Benjamin Harrison, in the popular vote, but was edged out in the electoral college. The Republicans were accused of orchestrating voting fraud in several swing states, which in such a close election would definitely have made the difference, if it happened.

Either way, Cleveland lost, so he went back to a normal life and began practicing law again. I find this kind of weird—imagine hiring the guy who was just finished being president as your lawyer? Really different times.

Four years later, Cleveland ran for president again, won the nomination, and faced Harrison in a rematch. If you want to hear what Grover Cleveland’s voice sounded like or what a campaign speech in 1892 sounded like, check this out.

Cleveland ended up winning, forever forcing Americans to deal with saying things like, “Obama is the 44th presidency, but only the 43rd president.”

His Presidency, Again: Cleveland maybe should have quit after one term, because the second term didn’t go well. The term began with the hideous Panic of 1893 and ensuing economic depression. Cleveland was unable to reverse this and by the time his term was over, fair or not, he was blamed for the hard times and the Democrats were in the doghouse again and the next three presidential elections would go to the Republicans.

Harrison had spent much of his term undoing things Cleveland had done in his first term, and Cleveland spent much of his second term undoing Harrison’s undoing of those things. Among other things, Cleveland hated Harrison’s raising of the import tariff and Harrison’s favorable policies toward silver backing. Harrison was also on his way to annexing Hawaii, but when Cleveland got back in office, he was skeptical. He sent a representative to Hawaii to closely examine the situation and report back about it, and what he learned left Cleveland unconvinced this was a necessary plan—he ended up skipping it, staying consistent with his non-interventionist philosophy.

At the end of his term, Cleveland had fallen out of favor with much of his own party and didn’t run again. He spent the next 12 years hanging around Princeton University (where Woodrow Wilson was the president) until he died of a heart attack at age 71.

Last Words: “I have tried so hard to do right.” I’ll give that to him—it seems like he actually did.