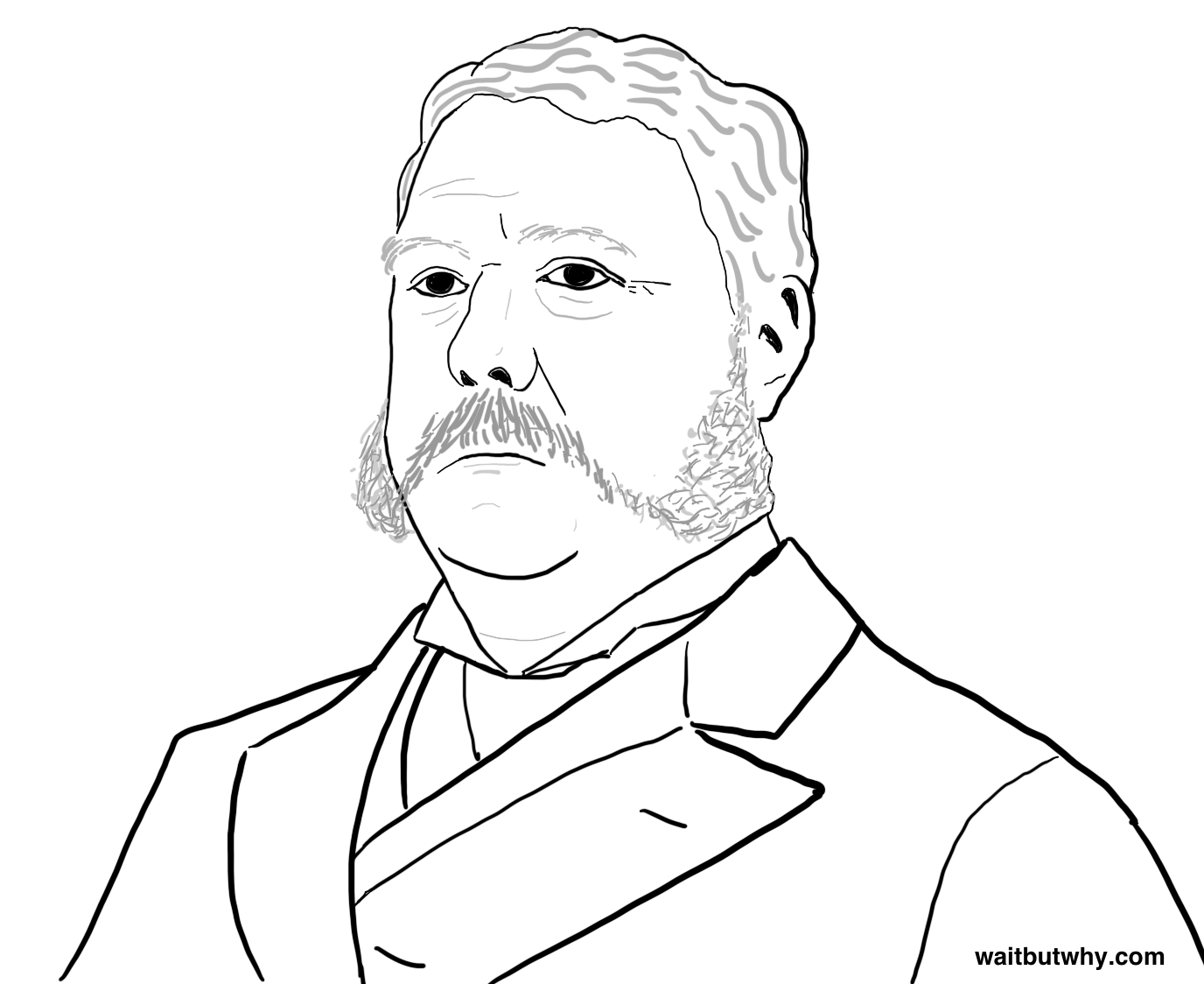 Mustache? Yes, and other weird objects

His Deal: In order to not be distracted as we do this, let’s just acknowledge now A) that his name is Chester A. Arthur, and B) that he non-ironically had this situation on his face:1 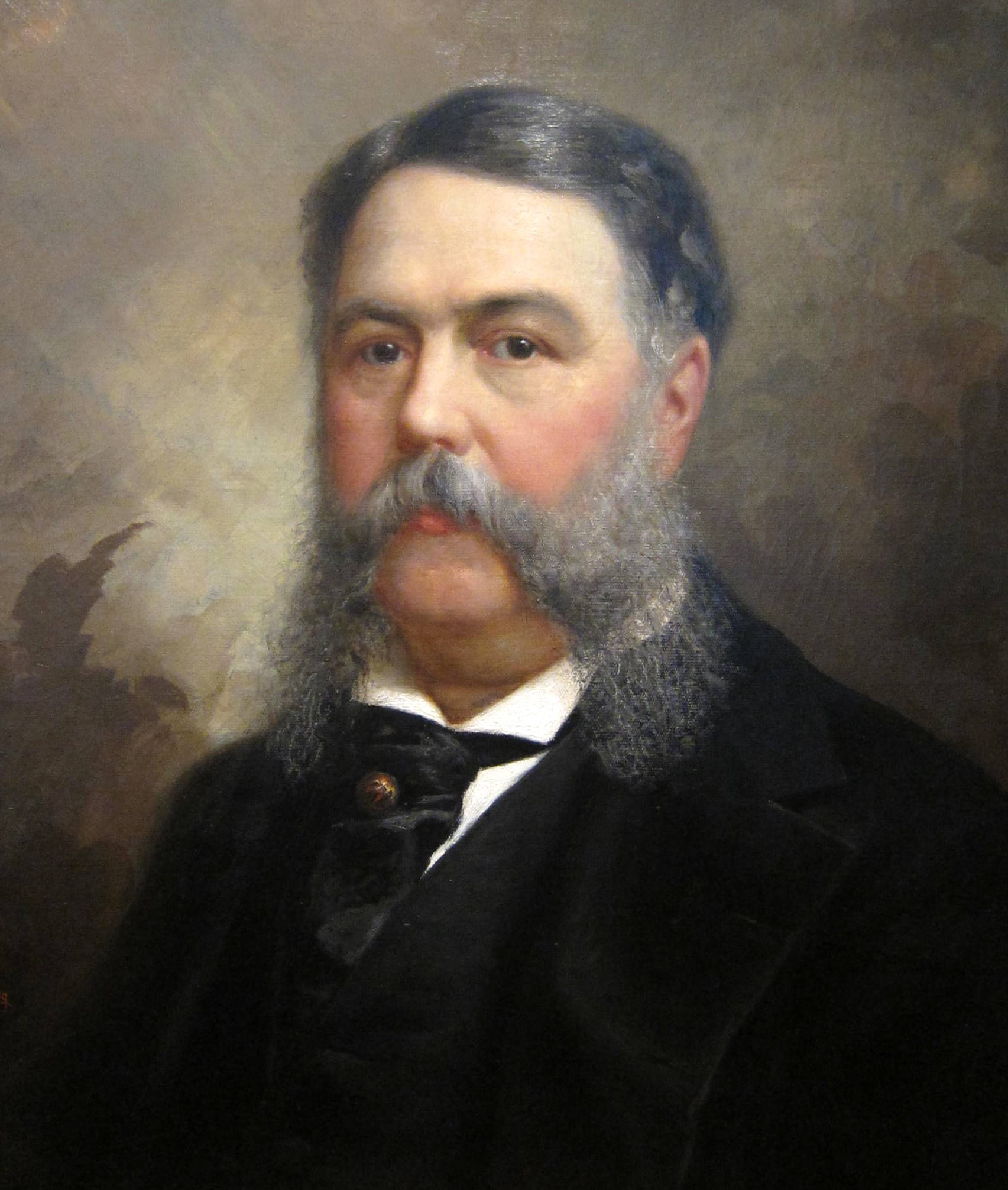 Now that that’s behind us, we can start.

Arthur edges out Van Buren as our fanciest president. His wardrobe, which included over 80 pairs of pants, was said to be “impeccable,” and he was nicknamed “Elegant Arthur.” During his presidency, he was known to have a vibrant social life, entertaining often and going out to lavish nightclubs. When questioned about his social life, he told the press, “I may be President of the United States, but my private life is my own damn business.” (Imagine a president doing any of this today.) Made a widower before assuming office, President Arthur was the most eligible bachelor in town, and four women offered him their hands in marriage the day his term ended.

His resume is similar to the last two presidents: first a teacher, then a lawyer, he fought as a civilian for civil rights in the pre-war years. Most famously, in 1854 Arthur represented a black woman who was denied a seat on a streetcar because she was black. They won the case, which led to the permanent desegregation of the New York streetcar lines. Then, like the others, he went to war in 1861, where he became a brigadier (one star) general, although he did less actual fighting than the previous three guys—his role was more organizational.

He left the military in 1863 and joined New York’s notorious political machine—which he did to help himself gain altitude in the political world, not because it perfectly matched his personal politics. Arthur rose in the system after the machine’s leader, US Congressman and future Senator Roscoe Conkling, took a liking to him. The machine loved President Grant, and the feeling was mutual, but Hayes, who was deadset against corruption of any kind and intent on civil reform, didn’t feel the same way, and when he took office, he cracked down on the shenanigans in New York and ended up firing Arthur.

But at the end of Hayes’ term, when the next Republican nominee became Garfield (who, like Hayes, appealed to the more radical, civil reform side of the party), Arthur’s affiliation with the pro-Grant, “Stalwart” side of the Republican Party made him a clever choice to be Garfield’s running mate.2

The thing about doing the clever “This guy will be a great running mate cause he represents my opponents’ point of view!” tactic is that now you have a running mate who doesn’t agree with you about anything. It’s a great move until you win the election and now the president and vice president have a chilly relationship and don’t really speak. This is how it was for Garfield and Arthur when they took office, and over the first few months, Arthur became increasingly ostracized as Garfield and the rest of the cabinet turned their back on Arthur and his opinions.

Then Garfield was shot. And suddenly, this recently-fired member of a marginalized party faction, a man with very little political experience, who was chosen mostly for symbolic reasons, and who disagreed with the rest of the administration about how things should be done, became the president.

His Presidency: When Arthur took office, expectations for his performance were low, across the board. His own cabinet didn’t like or trust him (this 1881 cartoon depicts their initial relationship), and no one knew what to expect. So it surprised everyone when Arthur turned out to not only be an effective president, but a fierce proponent of the civil service reform mission begun by Hayes and Garfield, often taking a hard stand against those who had been his previous allies. This delighted Garfield’s supporters and proved Arthur to be a strong compromise candidate who was able to unify the government enough to make some real progress. Most notable is his passage of the Pendleton Civil Service Reform Act, which replaced the spoils system with a merit-based system of appointing government positions—the very thing Hayes had tried so hard and failed to do and that Garfield had made one of the key goals of his presidency.

Towards the end of the term, Arthur considered running for his own four-year term, but two things made that difficult.

1) The same behavior that had made him an effective compromise candidate left him a bit in political no-man’s land, with his former allies now lukewarm about him because of his lack of adherence to their philosophies and his former opponents, while pleased with his presidency, still more passionate about their own candidates, who had been fervently in their camp for many more years than Arthur. Arthur was generally popular and respected and could have maybe won the nomination anyway if he had given the campaign everything he had—

2) But he couldn’t do that, because he was dying. He had learned during his presidency that he had kidney disease, and it had begun to take a serious toll on his health. He had kept this private, but this is a likely explanation for his lack of aggressive campaigning for the nomination, which he lost.

After his term ended, his health deteriorated rapidly, and two years later, he died.