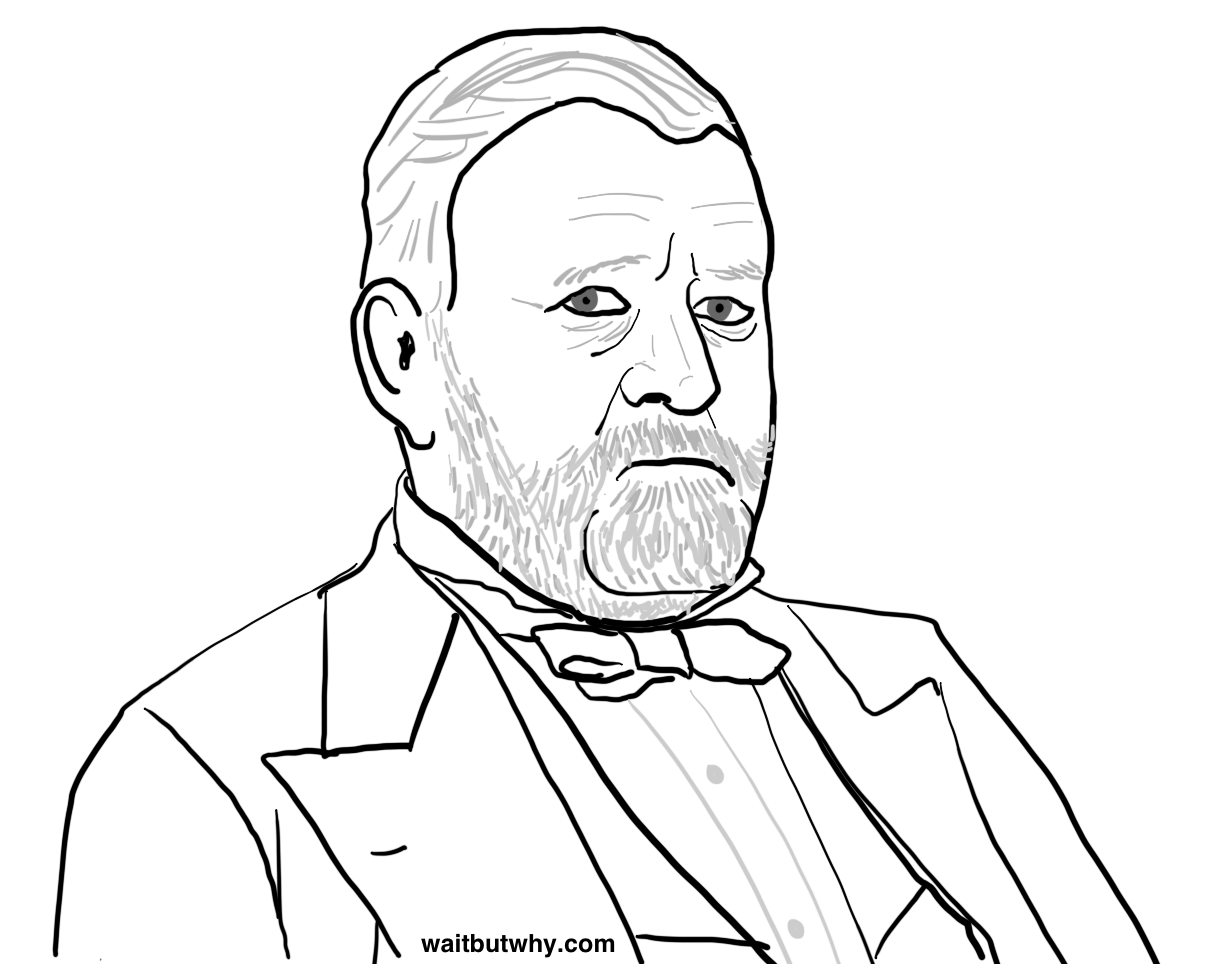 His Deal: Grant’s a tough one to judge. On one hand, he seems to have been a really great human being—honest, courageous, and compassionate. On the other, he wasn’t always the shrewdest of characters, which made him pretty outmatched by the incredibly difficult times during which he was the president. It’s also weird, because reading about him, you see that he was kind of a huge failure at most things and botched an immense number of endeavors in his life—but then you remember that the few successes he managed to squeak out were not-that-small things like being the legendary general who led the Union to victory in the Civil War and being a two-term US president. Most impressive failure of a man ever.

When he was 17, he was nominated by a Congressman to attend the military academy West Point. He wasn’t that into military stuff and didn’t seem to be especially good at it, finishing 21st in his class out of 39. He spent a lot of his time focusing on his paintings (which are actually quite good), and after graduating, he planned to do the standard four years of service before doing something else with his life. He served in the Mexican-American War1 without particular distinction, and was eventually asked to resign from the army due to his drinking problems. After starting a series of businesses, all of which failed, his father offered him a job at the family tannery business—but Grant refused, instead deciding to spend seven years failing at farming and then failing at bill collecting before finally crawling back to his father for work. He was self-loathing about this, and when the Civil War broke out and he volunteered for service, he said he was thrilled to not have to set foot in the tannery shop ever again.

It turns out that the military is where he was meant to be, as Grant kept impressing his superiors during the Civil War and was rapidly promoted until he hit the top. By the end of the war, Grant was leading the entire Union Army and through what historians consider brilliant war maneuvering,2 brought victory to the North. Grant was hugely popular in the years after the war and easily won the presidency in 1869.

After his presidency, Grant went on a two-year world tour and met with many leaders, including Otto von Bismarck, Queen Victoria, and Emperor Meiji. He returned home to renewed popularity due to the buzz that had built up about his world tour, ran for a third term as president after a four-year break, and almost made a serious run at it, but lost. Late in his life, he went back to failing, losing all his money in a failed financial venture with his son and an associate, and then suffered through a horrific case of throat cancer (he smoked 12 cigars a day), which ultimately killed him.

I was really struck by how much Grant, though a war hero, was not an Andrew Jackson-style tough guy dick. He would faint at the sight of blood (even rare meat upset him), had a hard time disciplining anyone, refused to shower in front of other men because he was shy, and unlike most of the presidents before him, he cared deeply about the plight of the country’s African-Americans and Native Americans.

His Presidency: Given that Grant was the #1 Civil War hero and a two-term president who was ahead of his time in his humane approach to the disenfranchised—how is it that Grant doesn’t end up with his face on Mount Rushmore, a huge monument in Washington, and with a thousand important things named after him?

By being pretty bad at being the president.

In fairness, he took office during Reconstruction, continued North-South strife, and right on the heels of Johnson’s debacle of a presidency, and to Grant’s credit, the initiatives and principles he stood for while in office—racial equality and compassion toward Native Americans, among others—are honorable and admirable. But the thing that made Lincoln such an effective president was his genius EQ and sharp political savvy—critical presidential qualities that Grant badly lacked. Grant showed poor judgment when choosing the leaders of his administration and was thus blindsided by the incredible amount of corruption that took place during his time as president (his administration is called the #1 most corrupt in US history—though he was not involved in it personally and never profited from any of it). He was soft on those corrupt officials and his lack of discipline fostered even more corruption. He attempted to peacefully annex the Dominican Republic to offer KKK-threatened African-Americans a safer place to go, but failed to win support for the idea. And because he didn’t know much about finance, he didn’t see the Panic of 1873 coming and was over his head when it struck, leading to a crippling five-year economic depression. Today, he’s consistently ranked by historians as one of the 10 worst presidents. 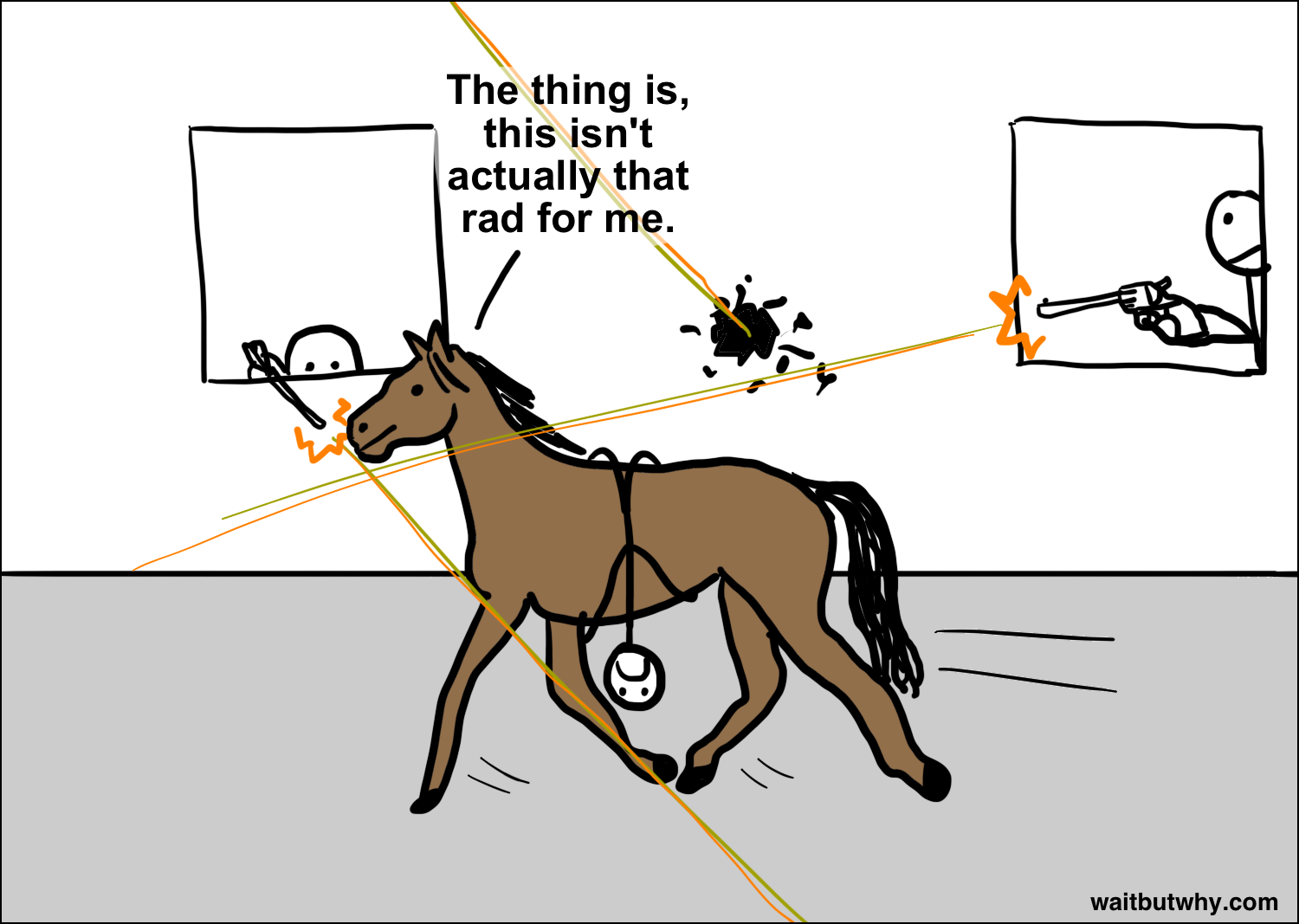 Last Words: “Water.” He was dying of throat cancer and wanted water. Fair.

Before we move on…

Grant’s presidency marks the end of the Bad President Circus (the 10-president run from W. H. Harrison to Grant that includes eight presidents ranked in the all-time bottom 10—see the diagram in Part 1 for more info). After digging deeply into the stories of these presidents, it’s clear to me that this isn’t a coincidence. The first four of the eight were two presidents who died soon after taking office and their two caught-off-guard vice presidents (at a time when the vice president often had a totally different agenda than the president), and the last four were the two before Lincoln and the two after Lincoln—all in office during probably the most difficult time in the nation’s history. A time like that exposes a president’s true level of talent, and while these guys were shown to not be great presidents, it’s perfectly conceivable that if any of them had been president during a smoother time (like Monroe’s Era of Good Feelings or Clinton’s booming, relatively-peaceful 1990s), they may have done a perfectly good job. Likewise, other presidents we consider effective may have also faired poorly if they had to lead during such a tough time.

The fact is, there are really two kinds of presidencies—those during normal periods, when it’s hard for a president to do anything that will make them crack either the top 10 or bottom 10 presidential rankings, and those during periods of severe, nation-threatening or nation-shaping strife—like the country’s first 50 years and the years around the Civil War, the two World Wars, or the Great Depression—when it’s hard to not end up either in the bottom 10 or top 10.

Periods of severe strife—mainly 1) the 90-year stretch that began with Washington’s presidency and ended with the Civil War and Reconstruction—a time when the country was both being shaped in major ways and descending into war with itself, and 2) the two world wars, when the fate of the country and the world were totally up in the air—make up about half of US history and 21 of the total presidencies. The other half of the history, and the other 22 presidencies, happened during normal times—not necessarily easy times, but years when there was at least some semblance of national stability. Of the 21 strife period presidents, 16 rank in either the top or bottom 10. Of the 22 normal period presidents, only four fall into the top or bottom 10 (those are Theodore Roosevelt and Dwight Eisenhower, who managed to make the top 10 without a nation-threatening crisis, and Warren G. Harding and George W. Bush, whose aggregate poll rankings land them in the bottom 104).

The last thing I’ll say about the Civil War era is that studying the failures of Pierce, Buchanan, Johnson, and Grant in trying to handle a nation brimming with conflict highlights just how incredible a president Lincoln was. The more I learn about Lincoln and his time in office, the more amazed I am by him.

Next (Rutherford B. Hayes) →