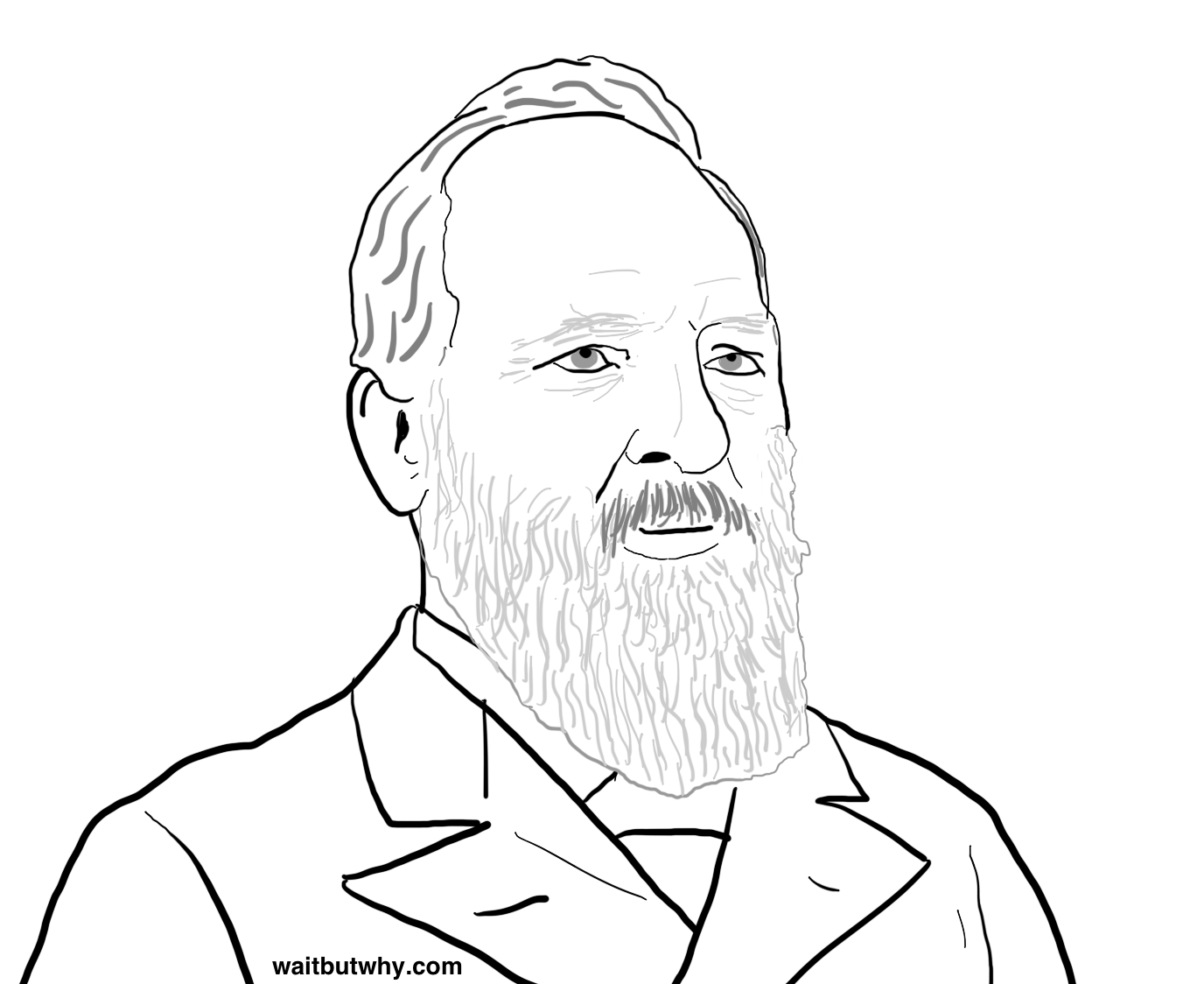 His Deal: Do you know how hard it is to be an assassinated US president and still be completely unfamous? Ask 10 Americans who the four assassinated US presidents are, and fewer than half of them will be able to mention Garfield. This must be horribly annoying for Garfield—being assassinated sucks, but at least the one huge perk is that you’re supposed to then go down as a legend in American history. Anyway, let’s figure out who this guy was and what he did before dying.

Garfield, another super beardy and fictional president who also turns out to just be a dude, was the last US president to have been born in a log cabin, and is yet another president raised by a single mother (his father died when he was an infant). At 16, he decided to leave home to become a seaman, but he came home after falling ill and started going to school. He excelled academically and supported himself during school as a janitor, bell ringer, and carpenter. He then went into a teaching career and dove deeper into academia, before eventually boring of that and becoming a lawyer.

He also fought in the Civil War, and like Hayes, rose to the rank of major general, making him the third straight president to have been a general for the Union during the war. Mid-war, he won a seat in the US Congress and spent the rest of the 1860s and all of the 1870s serving nine consecutive terms in the House.

He wasn’t planning on running for president—but as the Republicans tried to figure out their 1881 nominee, factions with differing opinions fell into a three-way stalemate (one of the three candidates under consideration was Grant, who was running again), and at the last minute, they ditched all three and turned to a surprising dark horse, Garfield—who they decided would be a great compromise candidate choice. He was like, “Ugh fine,” won the election, and was then randomly the president.

His Presidency: Lasted only 80 days, so not much to say.

Probably the most impactful thing he ended up doing in that time was continuing Hayes’ push towards civil service reform2—i.e. replacing the spoils system with the merit system—which his successor Arthur was able to finally push through, largely because of an outpouring of support for it resulting from Garfield’s death.

He had bigger plans—his inaugural address laid out an ambitious agenda to bring full rights and full citizenship to African-Americans to prevent them from becoming “a permanent disfranchised peasantry,” implement federal universal education to drive down the rate of illiteracy (especially among southern blacks, 70% of whom were illiterate at the time), and get rid of the greenback3 in favor of money backed by a gold standard, which he considered “honest money.”

And this was a fine plan—only problem is Garfield had a stalker. Charles Guiteau, a lawyer and preacher, was pretty convinced that a speech he had made during the run-up to Garfield’s election had been the reason for Garfield’s victory,4 and as such, he felt entitled to an ambassadorship of his choice when Garfield won—first he was thinking Vienna and then changed his mind to Paris. So each day, Guiteau lined up outside the government offices with others who wanted a position and put in his request. Each day, he was turned down. He was persistent and became increasingly aggressive about it until finally, they were like, “So actually never come back here again k?” Guiteau felt burned and decided that the only reasonable reaction was to assassinate the president.

Reading about Lincoln, Garfield, and McKinley’s assassinations, it’s clear that killing the president back then was one of the easier things you could do in life. It was as simple as just showing up to wherever the president was, walking up to him with a gun, and shooting him. So that’s what Guiteau did, in a train station, in broad daylight, with people everywhere.

The wounds weren’t fatal, and today’s doctors have said they think Garfield would have been totally fine if doctors back then had any idea about handling the insides of someone’s body with sterile hands and tools. Instead, they picked around his body forever, looking for the bullets, and getting all kinds of shit into his system. This took an extra long time because Alexander Graham Bell showed up with a metal detector he had just made so they could find the bullets, but it kept getting messed up because Garfield was on a bed with metal springs, and they continued looking for the bullets in the wrong places, slicing through some of his key organs in the process. I can’t imagine this was a fun experience for Garfield.

Garfield hung on for two and a half more months as his body broke down more and more from all the various gangrene and blood poisoning the doctors had left him with, when he finally suffered a major heart attack and died. Odd to spend two and a half months knowing that you’re a future assassinated president.

As for Guiteau, he proved himself to be fully insane,5 smiling and waving to spectators each day as he entered the court, writing letters to Garfield’s successor, Chester A. Arthur, asking to be pardoned, and making plans to start a lecture tour after his release and then to run for president. Instead, he was promptly hanged, but not before reciting a poem he had written as they prepared the noose (he had requested that an orchestra play while he read the poem, which was denied).

Last Words: During his massive heart attack, to his Chief of Staff, David Swaim: “Oh Swaim, there is a pain here. Swaim, can’t you stop this? Oh, oh, Swaim!” These are getting kind of upsetting. I miss the ones from the first post where the guys were being all poetic about it.