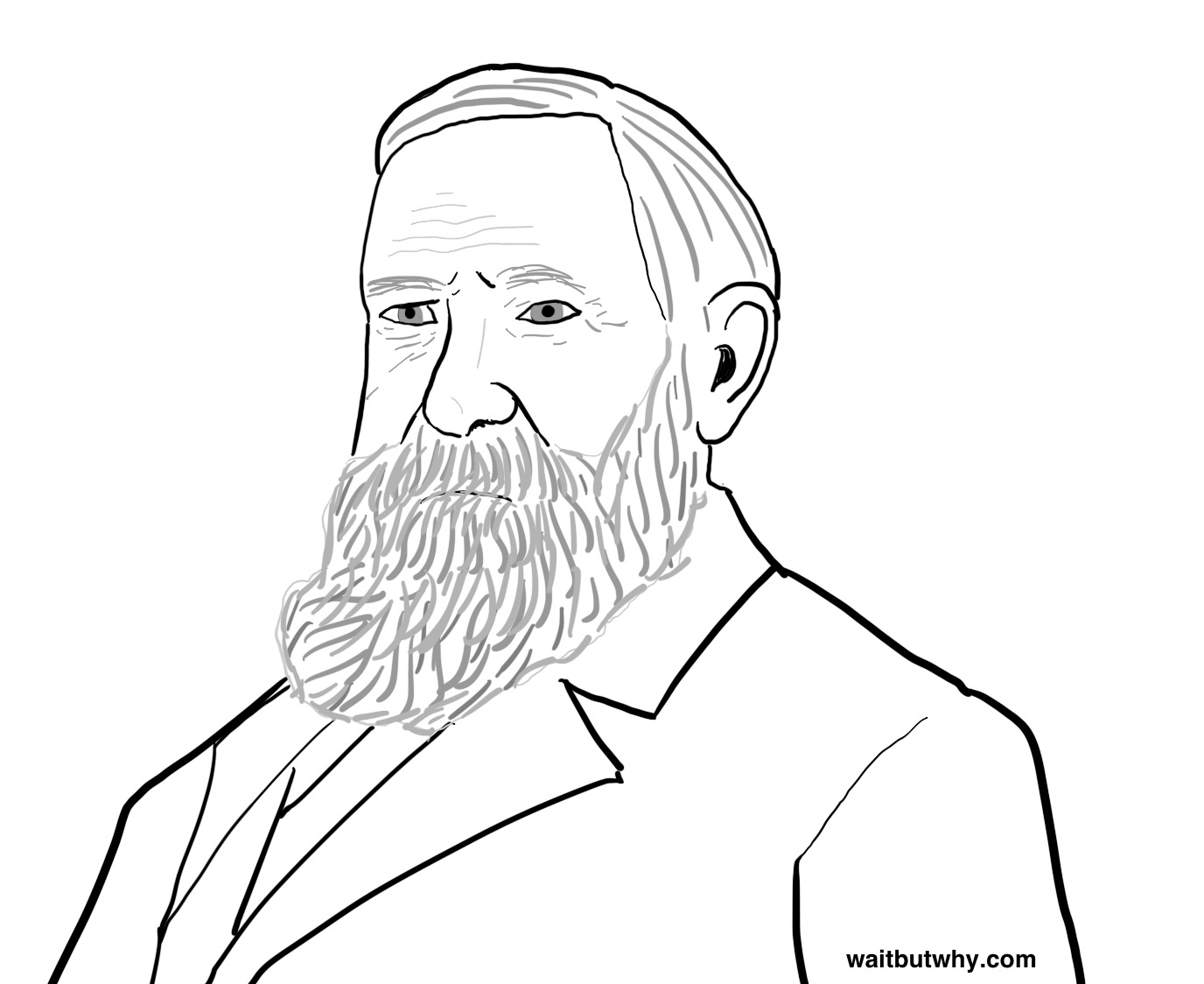 His Deal: Grandson of William Henry Harrison, Benjamin Harrison managed to outdo his grandfather in non-famousness and rise to become our most unfamous president. As this article points out, Harrison is the perfect storm of forgetableness—he wasn’t a good president, he wasn’t a terrible president, he doesn’t have a weird name, he doesn’t have a weird look, he’s not that beardy, he wasn’t president during any kind of memorable event, he wasn’t a notorious cock, he wasn’t assassinated, his presidency wasn’t near the beginning of US history, in the vicinity of the Civil War, or especially recent, and he only served one term. I just had to scroll up to the heading to reread his name because I had already forgotten him. But if we can retain him in our working memories for a few minutes, we’ll be able to learn about who he was and what he did before forgetting him entirely once we move onto the next page.

Harrison, an Indiana lawyer, was yet another Civil War general to become president (his highest rank was brigadier, or one star general). If you were an American man born between 1820 and 1835, all you had to do was become a lawyer, fight in the war and become a general, and then grow a beard and you automatically became president.

After the war, Harrison ran as a Republican for governor of Indiana and lost before winning a Senate seat in 1880 and then losing the seat in 1886. Two years later, after the Republicans were disappointed that their first choice presidential nomination, James Blaine, declined to run, they turned to a consolation group of candidates and ended up selecting Harrison, who they believed could appeal to a wide group. He ran against Cleveland, and as we discussed, lost the popular vote and probably the electoral vote too, if not for voter fraud, but despite losing, won, and became the 23rd president.

His Presidency: In stark contrast to Cleveland’s conservative administration, Harrison was highly progressive and focused on the exact things Cleveland had turned his attention away from.

His shining achievement was the passage of the Sherman Antitrust Act—which prohibits business practices the federal government deems to be anti-competitive. This act was the first of its kind and it’s still part of the law today. He also strengthened and modernized the Navy and got moving on a bunch of bold and active foreign policy projects, hoping to stimulate trade and opportunity.

Socially, he was more serious about rights for African Americans than any president before him. In 1889, he pled with Congress:

The colored people did not intrude themselves upon us; they were brought here in chains and held in communities where they are now chiefly bound by a cruel slave code…when and under what conditions is the black man to have a free ballot? When is he in fact to have those full civil rights which have so long been his in law? When is that quality of influence which our form of government was intended to secure to the electors to be restored?

Unfortunately for 19th-century African Americans, Harrison, like the other well-meaning post-Civil War Republican presidents, didn’t end up being able to change very much for them. We’re seven presidents out now from the Civil War, and it really seems like in those first years after the war, when there was a small window where the nation was unusually shapeable, Johnson’s impeding of the Republican agenda that Lincoln would have charged forward with had profound long term effects.

Fiscally, Harrison turned out to be a bit of a disaster. In the ongoing battle about silver-backed money, Harrison stood in favor of it and increased its usage, which ended up depleting the country’s gold supply. He passed the McKinley Tariff, which raised trade rates. He watched the nation’s surplus vanish as he became the first president to spend over a billion dollars (funny cartoon about this). The result of all of this was the Panic of 1893 and Harrison losing his bid for reelection, to Cleveland.

After his presidency, he returned to law, and he died four years later from flu-related complications. Historians aren’t especially impressed with Harrison’s presidency, aggregate ranking him at 11th worst, but they do give him credit for “pointing the way” to the modern and more successful McKinley presidency and for inspiring Theodore Roosevelt’s active foreign policy. In other words, he had good ideas—he just wasn’t a good enough president to pull them off.

Last Words: As he died of pneumonia, “Are the doctors here? Doctor, my lungs…” Yeesh.