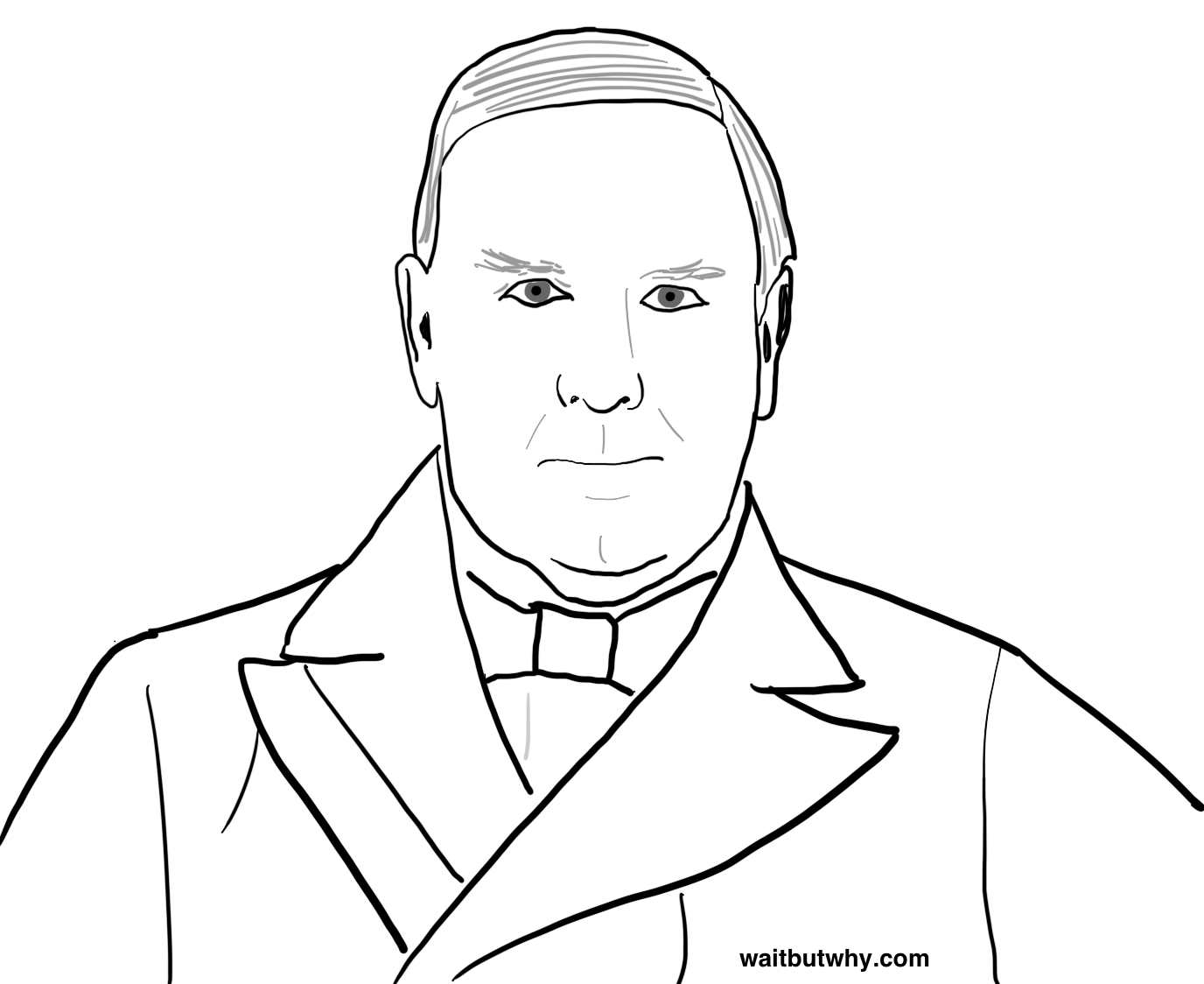 His Deal: An island of facial sanity in a sea of mustaches, McKinley joins Garfield as the second president to be assassinated and have no one today really know about it or care.

McKinley is the last president to fight in the Civil War. He was only 18 when it began, but he impressed his superiors, including future President Hayes (who became a lifelong mentor to McKinley), and ended up as a major by the end of the war.

After the war, McKinley began practicing law, something I’m getting pretty sick of writing, and a few years later, he ran for Congress and won. He held a Congressional seat for 13 of the next 15 years before becoming Ohio’s governor for four years. By the time 1896 rolled around, McKinley had become a pretty popular figure in national politics, and with the help of his powerful fellow Ohio politician Mark Hanna, he locked up the Republican nomination for president. McKinley faced a strong opponent, William Jennings Bryan, but won the electoral vote by a significant margin.

His Presidency: The major thing McKinley’s presidency is known for is the Spanish-American War. Trouble started early in McKinley’s term as Cuba was demanding independence from Spain, and Spain said no. Kind of not our problem right? But the public felt for Cuba, and they knew the US military had the power to force Spain to concede, and many Americans were pushing for it to happen (some historians think Americans were kind of also just in the mood to fight someone, since there hadn’t been a war in a while). McKinley felt for Cuba too, but he didn’t want to go to war over it, and tried to persuade Spain to acquiesce, or at least offer Cuba more autonomy. Spain was maybe willing to offer small concessions, but they weren’t about to grant Cuba independence.

Again, not really the US’s problem, and certainly not worth starting a bloody war over. But then, in 1898, McKinley sent the battleship USS Maine to Cuba to investigate reports of riots, and it was unexpectedly blown up, killing 266 men. The public now demanded a war, but McKinley insisted on investigating the situation to see if this was actually Spain’s doing. The investigation didn’t produce anything conclusive, but they thought the battleship had hit an underwater land mine—not really Spain’s doing. But the public didn’t care and they kept spazzing about the situation, convinced it was Spain’s fault. McKinley still didn’t want to go to war, but finally was like, “Jesus just shut up fine!” and sent the matter to Congress to make it Congress’s problem. Congress declared war on Spain.

So suddenly McKinley’s in this war—but the good news for him is that the American Navy was rad and handled Spain pretty easily. As the war went on, McKinley started getting excited about taking other Spanish territory too, like the Philippines, Puerto Rico, and various Pacific Islands like Guam. Then Spain, who knew it had lost, was like, “Okay okayyyyy you can have Cuba, done k bye” and tried to back out of the room, but McKinley was like “Ohhh no ya don’t. Sorry we’re gonna do the victor-spoils thing here and force you to sell all your other shit to us too, sorry you lost” and Spain just got sad and said okay. They signed the Treaty of Paris, handing over Cuba, the Philippines, Puerto Rico and Guam for $20 million ($571 million in today’s money).

While McKinley was in an imperialist mood, he went over and snatched up Hawaii too, under the hilariously nonsense justification of manifest destiny.

Domestically, McKinley was really into protectionism—i.e. controlling the price or volume of imports, usually through an import tariff, in order to keep domestic businesses competitive (it was his McKinley Tariff of 1890 that was so hotly debated through the Cleveland and Harrison presidencies). On the race side of things, African Americans had had high hopes for what McKinley’s presidency might mean for their plight, but McKinley disappointed them by treating race issues passively and as a lower priority than expected.

Anyway, McKinley finished his term a pretty popular president and ran for reelection in 1900, this time with a new running mate—Theodore Roosevelt—since his old running mate had died during the term, and they won in a landslide.

A few months later, Leon Czolgosz, an anarchist who felt there was great injustice in the country and had been inspired by the recent news of an Italian anarchist taking matters into his own hands and killing the King of Italy, showed up at a stop along McKinley’s tour of the country, got in line to meet the president, and when he got to the front of the line, shot McKinley twice in the chest with a gun hidden in his handkerchief.1

McKinley didn’t die immediately. In fact, for a few days, McKinley seemed to be improving, and his doctors were optimistic. But getting shot in the 1800s is a lot more unfortunate than getting shot today, and the doctors completely missed the fact that gangrene was growing in his stomach and slowly poisoning his blood. McKinley began to realize he had no hope and accepted his fate (again, odd to be aware that you’re an assassinated president) and said bye to everyone and his sobbing wife. Eight days after the shooting, McKinley died a popular president, and the nation went into severe mourning. Czolgosz went to the electric chair a few weeks later. And Theodore Roosevelt became president.

Last Words: “Goodbye, all, goodbye. It is God’s way. His will be done.”

You made it all the way to the end. Good job. Next round (down the road) starts with Roosevelt.