The thing about visiting the Developing World when you live in the Developed World is that it’s a rich, eye-opening, perspective-building cultural experience and the other thing about it is that it sucks.

You know that upsetting person who posts pictures on Facebook of themselves doing some delicious- or beautiful- or wild-looking activity in somewhere like Tanzania or India or Peru? And even though they’re posting for their own purposes as part of a skillful weave of Image Crafting and Jealousy Inducing, it makes you yearn anyway as you sit there in whatever shitty life you’ve chosen for yourself?

The thing you need to remember is that they did some careful cropping on the photo—they cropped out the misery. Misery is a government requirement when you visit a country like Tanzania or India or Peru and your body is totally unaccustomed to the ecosystem, but that’s easy to forget when you’re not there.

So it’s not that your upsetting friend isn’t having a great time—they are—but beneath their shit-eating open-jaw delighted smile and upward-extended arms grasping into the succulent mist of a waterfall, just a couple feet down are aching, blistered feet, malaria-ridden-mosquito bitten legs, and some gurgling diarrhea nightmare.

You should still be jealous—just not that jealous.

Let’s pause for a moment to examine the distinction between traveling and going on vacation.

There are three things you can focus on when you’re on a trip:

2) The People. Getting to know the modern culture and the mindset of the people; developing a better understanding of what it’s like to live there by asking questions, visiting residential areas, and socializing with locals.

3) Yourself. Being hedonistic, focusing on eating, drinking, reading, and relaxing.

But for the average person, which of these three objectives can be easily achieved will depend on the specific location of the trip. Some examples of where they’ll be achieved most naturally: 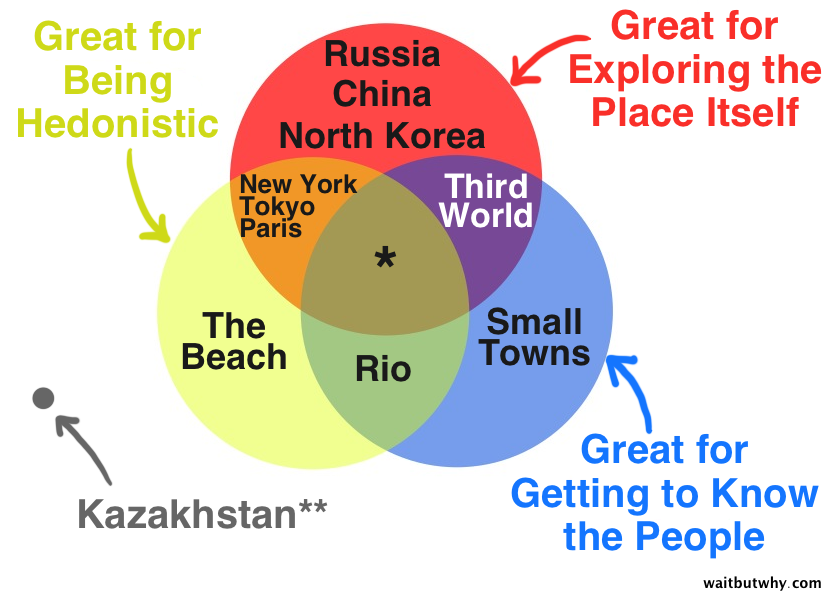 ** A) But really. B) I’ve been there so I’m not just being a dick. C) It was a good choice for that joke because there aren’t many Kazakh Wait But Why readers, so I’ll get in a relatively small amount of trouble for this.

So as far as traveling vs. vacation goes—

For a trip to qualify as a “vacation,” hedonism (Item 3 above) must be a prominent component of things, and misery shouldn’t really enter the equation. A vacation should recharge your batteries and your health. And vacations are non-controversial. They’re good.1 But their effects are also more on the surface and likely not long-lasting.

Traveling, on the other hand, I define very differently. The core focus of a “traveling” trip must be either Item 1, Item 2, or both. Hedonism can sometimes play a part of a traveling excursion, but it’s not the reason you’re there, and you likely will not finish the trip feeling healthy and refreshed—you’ll feel like you need a vacation. Traveling is less uniformly “good” than vacation—some moments will be astoundingly great, and others will be the worst part of your year. But whatever happens may stick around and become part of who you are.

This post is about traveling, and in particular, the quintessential “travel” experience—the one that best nails both Items 1 and 2 (while usually missing Item 3 entirely)—Third World travel. Specifically, as it is experienced by a visiting First Worlder.

(There’s a chance that the terms First World and Third World are offensive. I’m not sure. I googled around about this, and my impression is that there are like two more years before the terms become officially offensive—so I plan to get my fill while I can, because the terms Developed World and Developing World are far less amusing.)

(Reading this post aloud would have been six-year-old Tim’s biggest nightmare. “World” was the second-hardest word to pronounce correctly for me, behind only “girl.” I remember thinking it was so incredibly impressive that anyone could say “girl” correctly. Let’s move on.)

1) There aren’t nearly as many rules.

You can usually kind of just walk into places and drive in the wrong lane and drink on the street and do whatever you want and no one cares. On some domestic flights in Myanmar, there wasn’t even a security checkpoint.

On the misery front… The same lack in structure can make it a logistical nightmare. 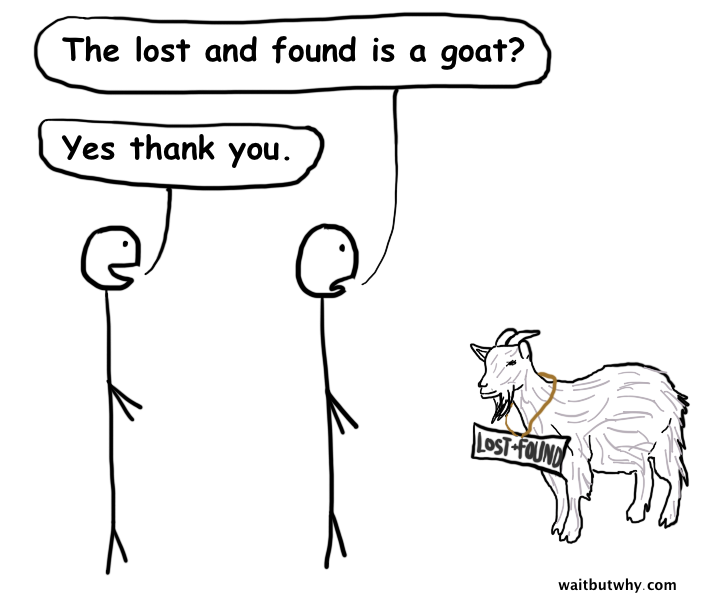 2) If you’re friendly, it’s not hard to get to know local people.

I acknowledge that I might think this is true because I just act friendlier in the first place because I think people in other countries are friendlier and then they respond in kind. But either way, I’ve been invited into dozens of homes in third-world countries simply by being smiley and starting a conversation. One time, a family in a tiny apartment all slept in the kitchen to give me their one bedroom (against my pleading protests). I’m yet to be invited anywhere by a New York stranger.

This is why third-world countries do so much better than first-world places in the “People” section of the above Venn Diagram.

On the misery front… The language barrier can ruin everything if you don’t learn some of their phrases.

3) The food is often great and totally different than what you’re used to.

On the misery front… The food can be terrifying. 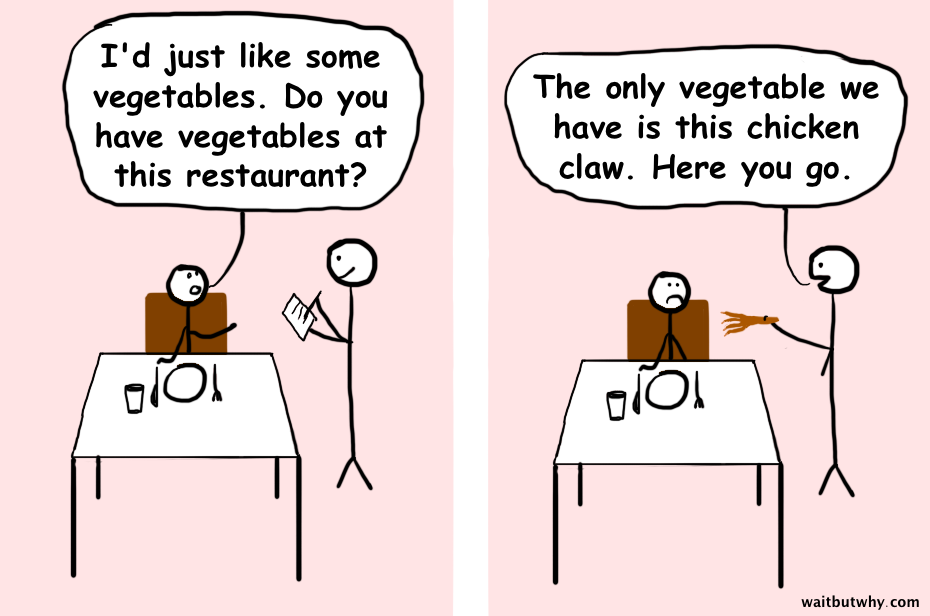 4) The culture is usually completely foreign to you and eye-opening and fascinating to learn about.

The way I like thinking about it, I live in a world that is a product of centuries of a certain population of humans and the way they learned how to live life. When I travel to any really different culture, it’s a chance to see what a totally different population of humans ended up with when they took their own crack at how to live life. What could be more fascinating than that?

On the misery front… You might inadvertently horribly violate some cultural taboo. 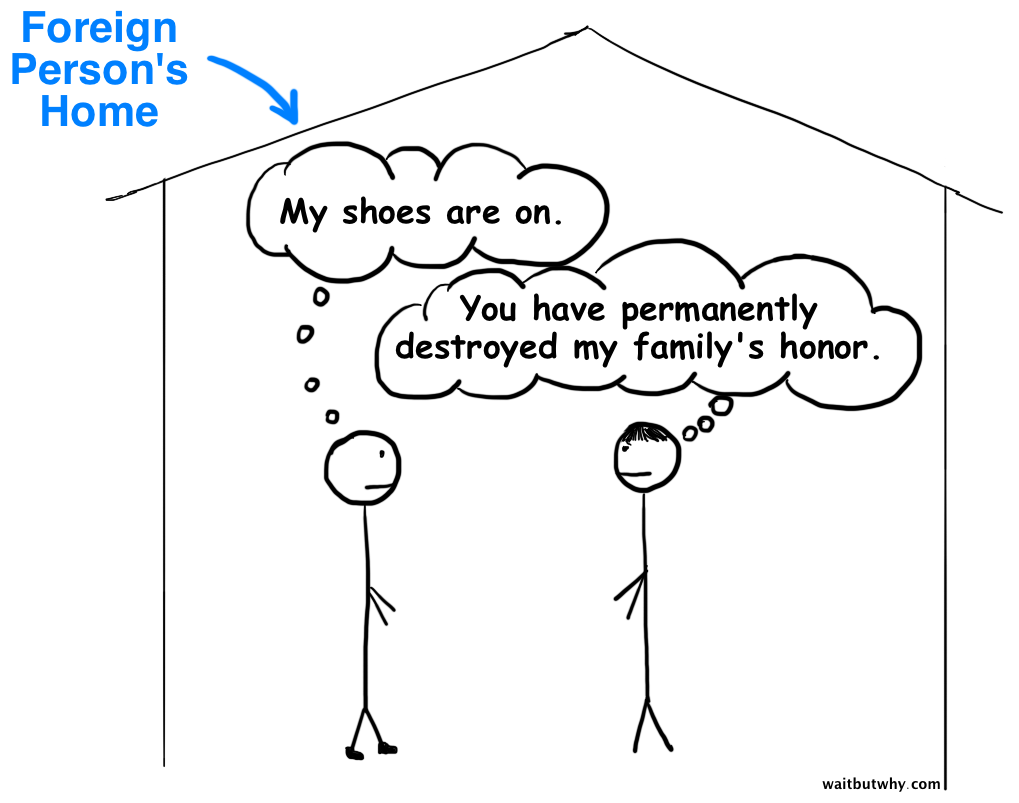 5) There are cool animals.

I seem to come across elephants, (sedated) tigers, cobras, emus, and a number of monkeys and apes in third-world places. Not much chance to do that where I’m from.

On the misery front… There are lots of stressful stray animals everywhere. 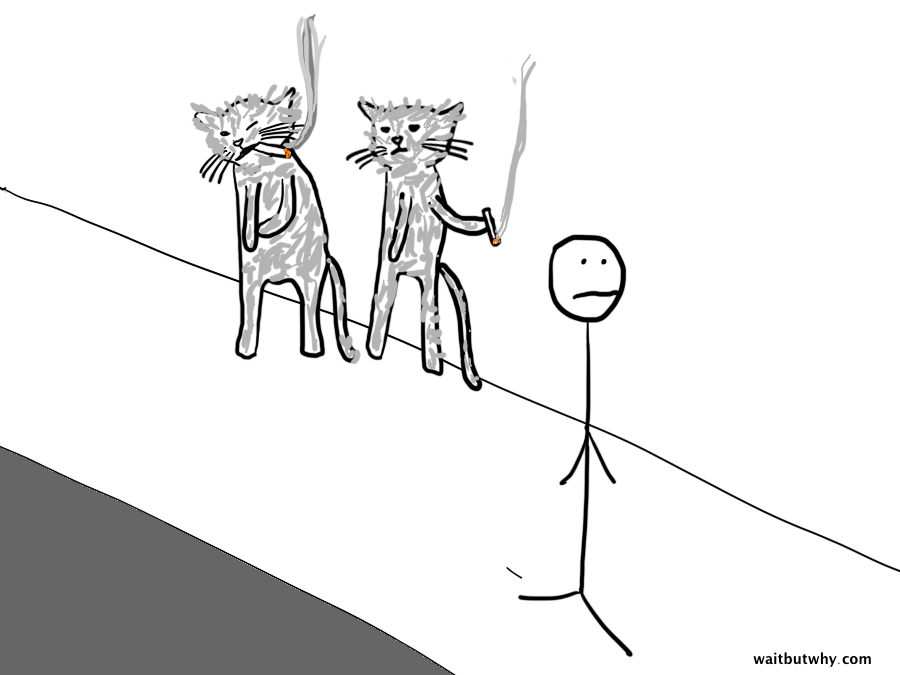 6) You can buy amazing crafts you can’t get anywhere else.

On the misery front… You’re the target prey for relentless shop owners. 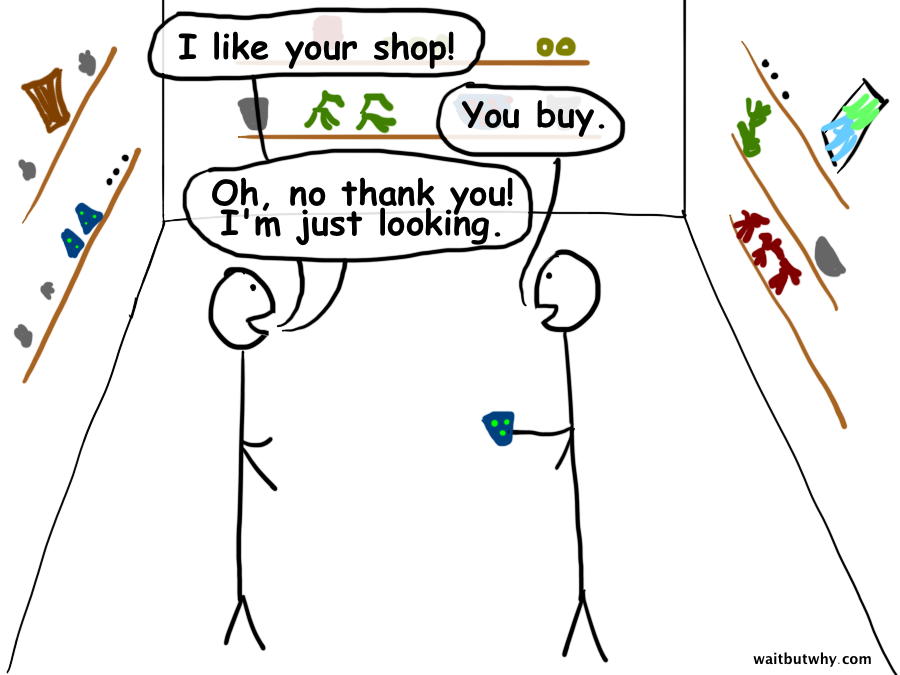 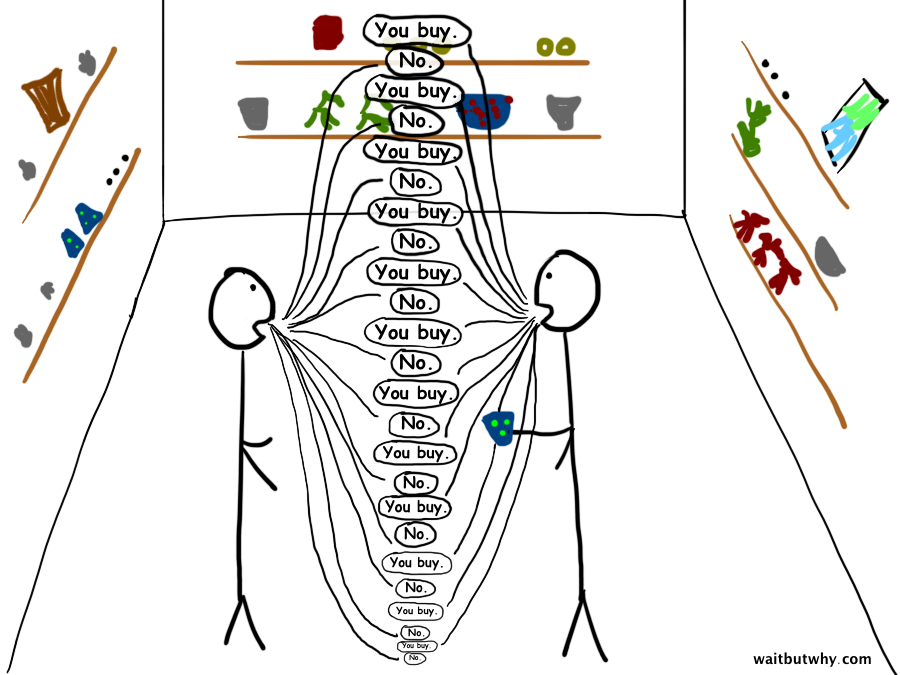 7) It’ll remind you that you live in a palace back home, and that you did nothing to deserve that. 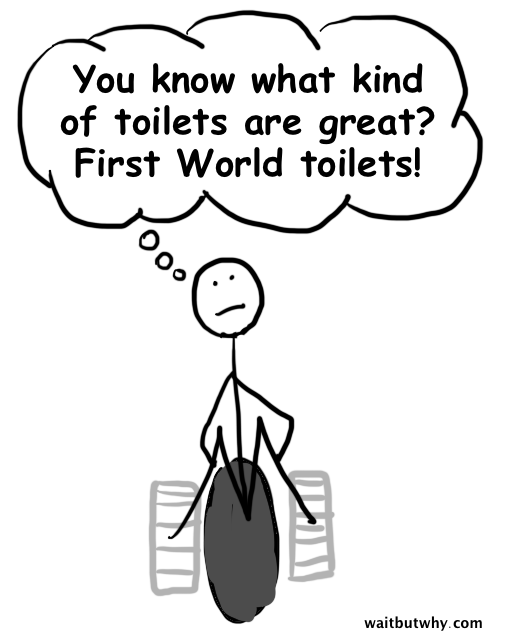 All it takes is a little time in a third-world country to be blown away when you return home by the sheer quality of life you get to enjoy—the pristine cleanliness of the streets, the vast abundance in the grocery stores, the utter comfort of everything—suddenly the immense wealth of the First World is blatantly apparent everywhere you look and you remember that everyone you know lives like a king without realizing it. Then two days later you forget too and start complaining about everything again.

On the misery front… It’ll remind you that you live in a palace back home, and that you did nothing to deserve that.

8) You won’t be one of the ignorant First Worlders who thinks it’s dangerous to visit the Third World or has other gross misconceptions of what the third-world countries are like.

If you employ the same common sense that keeps you safe in your hometown, visiting third-world countries is zero percent dangerous. And anyone who tells you differently is either over-paranoid or has little travel experience.

On the misery front… You risk becoming a self-righteous douchebag who’s way too proud of themselves for their third-world experiences. 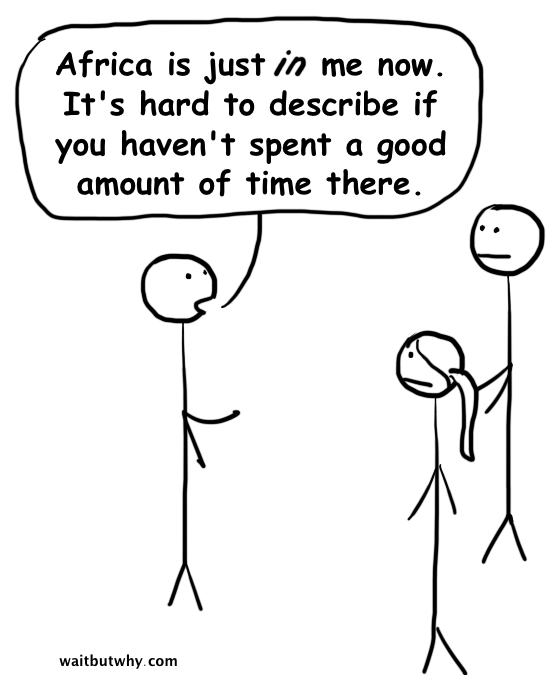 Other Wait But Why posts on traveling:

20 Things I Learned When I Was in North Korea

The 12 Types of People You’ll Find in Every Hostel