Wait But Why holds a work retreat for all of its stick figures. Everyone’s excited about it—it’s a chance to get to know each other better, which is rare because they’re typically confined to their own drawings and not able to socialize.

Soon, though, things take a dark turn, as it is announced that Wait But Why can no longer employ all of them and needs to downsize.

The decision is that all stick figures with perfect head circles will keep their jobs, and those whose heads Tim messed up by not connecting the circle will be erased. 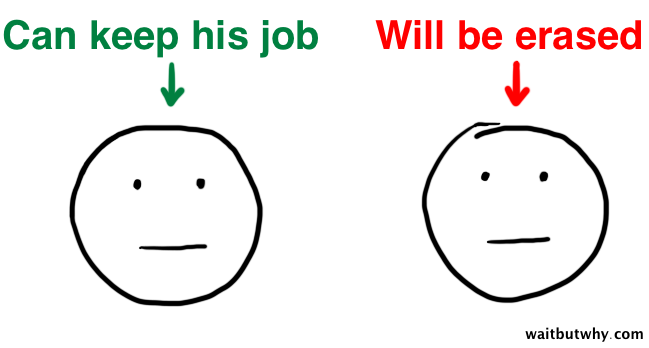 The thing is, stick figures can’t look in the mirror and there’s no way for them to tell what their own head looks like. They can see all the other stick figures’ heads, but not their own.

To avoid the awkwardness of having to tell the messed up drawings that they’re going to be erased, Tim and Andrew make the following statements and then spinelessly leave the retreat:

Statement 1: From here forward, there will be no mention of anyone’s head quality whatsoever, including any facial expressions or body language that could give someone information about what their head looks like.

Statement 2: If at any point you discover that your head is messed up, you are required to erase yourself that night at midnight. 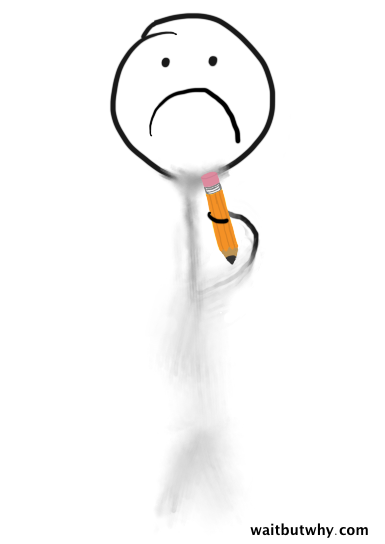 Statement 4: It is announced that there are 100 stick figures present at the retreat and at least one stick figure present has a messed up head.

Disturbed, the stick figures go on with Day 1 of the retreat and try to enjoy themselves as best they can. That night at 10pm, they all head to their bedrooms and go to sleep.

The next day (Day 2), the stick figures come out for the day, and everyone is still there. Same story on Day 3. In fact, it’s the same story through Day 8.

But when the stick figures emerge from their bedrooms on the morning of Day 9, the only ones present have perfect heads. It seems that all stick figures with messed up heads erased themselves on the night of Day 8.

The question is: How many stick figures erased themselves on Day 8 and why did things play out this way?

This is based on a famous logic puzzle. Think long and hard about it before you look at the solution. There are two hints below to help you along the way if you’re stuck.

But when Day 2 rolls around and Guy A sees Guy B emerge that morning, fully intact, he knows that Guy B must have gone to bed without the knowledge that his head was messed up. The only way that could have happened, since Guy B knows that at least one person has a messed up head, is if Guy B saw someone else with a messed up head. Since Guy A saw perfect heads on the other 98 stick figures, he concludes that he must also have a messed up head.

Guy B goes through the same thought process, so on Day 2, both of them know that they have messed up heads and both erase themselves that night at midnight.

Guy B and Guy C have this exact same revelation on Day 3, and that night, all three of them erase themselves.

If the hint and solution links won’t expand on your device, view them here.

More puzzles on Wait But Why:

The Puzzle of the Pirate Booty

And one very big puzzle:

What Makes You You?