Often, the key to succeeding at something big is to break it into its tiniest pieces and focus on how to succeed at just one piece.

When we examined procrastination, we talked about how a great achievement is just what a long series of unremarkable tasks looks like from far away. In the pixel post, we looked at a human life up close and saw that it was just an ordinary Wednesday, again and again and again—and that achieving life happiness was all about learning to be happy on a routine weekday.

I think the same idea applies to marriage. 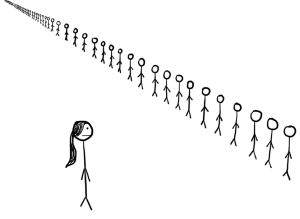 From afar, a great marriage is a sweeping love story, like a marriage in a book or a movie. And that’s a nice, poetic way to look at a marriage as a whole.

But human happiness doesn’t function in sweeping strokes, because we don’t live in broad summations—we’re stuck in the tiny unglamorous folds of the fabric of life, and that’s where our happiness is determined.

So if we want to find a happy marriage, we need to think small—we need to look at marriage up close and see that it’s built not out of anything poetic, but out of 20,000 mundane Wednesdays.

Marriage isn’t the honeymoon in Thailand—it’s day four of vacation #56 that you take together. Marriage is not celebrating the closing of the deal on the first house—it’s having dinner in that house for the 4,386th time. And it’s certainly not Valentine’s Day.

Marriage is Forgettable Wednesday. Together.

So I’ll leave the butterflies and the kisses in the rain and the twice-a-day sex to you—you’ll work that part out I’m sure—and spend this post trying to figure out the best way to make Forgettable Wednesday as happy as possible.

To endure 20,000 days with another human being and do so happily, there are three key ingredients necessary:

I enjoy spending time with most of my friends—that’s why they’re my friends. But with certain friends, the time is so high-quality, so interesting, and so fun that they pass the Traffic Test.

The Traffic Test is passed when I’m finishing up a hangout with someone and one of us is driving the other back home or back to their car, and I find myself rooting for traffic. That’s how much I’m enjoying the time with them.

Passing the Traffic Test says a lot. It means I’m lost in the interaction, invigorated by it, and that I’m the complete opposite of bored.

A friendship that passes the Traffic Test gets better and better with time, and it has endless room to deepen and grow ever-richer.

2) A Feeling of Home

If someone told you you had to sit in a chair for 12 straight hours without moving, aside from wondering why the hell they were making you do this, your first thought would be, “I better get in the most comfortable possible position”—because you’d know that even the slightest bit of discomfort would grow to pain and eventually, torture. When you have to do something for a long, long time, it’s best if it’s supremely comfortable.

When it comes to marriage, a perpetual “discomfort” between you and your partner can be a permanent source of unhappiness, especially as it magnifies over time, much like your torturous situation in the chair. Feeling “at home” means feeling safe, cozy, natural, and utterly yourself, and in order to have this feeling with a partner, a few things need to be in place:

3) A Determination to be Good at Marriage

Relationships are hard. Expecting a strong relationship without treating it like a rigorous part-time job is like expecting to have a great career without putting in any effort. In a time when humans in most parts of the world can enjoy freedom and carve their own path in life, it usually doesn’t sit that well to suddenly become half of something and compromise on a bunch of things you grew up being selfish about.

So what skills does someone need to learn to be good at marriage?

In searching for your life partner or assessing your current life partnership, it’s important to remember that every relationship is flawed and you probably won’t end up in something that gets an A in every one of the above items and bullet points—but you should hope to do pretty well on most of them, since each one plays a large part in your lifelong happiness.

And since this is a daunting list to try to achieve in a life partnership, you probably don’t want to make things even harder than they need to be by insisting upon too many other checkboxes—most of which will not have a large effect on your happiness during dinner #4,386 of your marriage. It would be nice if he played the guitar, but take it off the list of must-haves.

I hope Valentine’s Day was good for you this year, whatever you did for it. Just remember that Forgettable Wednesday is a much more important day.

If you liked this, check these out next:

The facts and opinions in this article are based on a combination of dozens of hours of research, on both scientific study results and expert opinions, and of my own personal experience and observations and those of a number of my friends and family (many of whom I interviewed in the last week). Special thanks to Eric Barker for his great blog, Barking Up the Wrong Tree, from which I mined a number of sources for this post.

1. http://www.telegraph.co.uk/news/politics/10090130/Marriage-makes-people-happier-than-six-figure-salaries-and-religion.html
2. “Marital Status is Misunderstood in Happiness Models” from Deakin University, Faculty of Business and Law, School of Accounting, Economics and Finance; Economics Series Paper # 2010_03.
3. http://www.rawstory.com/rs/2012/08/08/most-young-adults-expect-marriage-for-life-study/
4. “Sex differences in mate preferences revisited: Do people know what they initially desire in a romantic partner?” from Journal of Personality and Social Psychology by Eastwick, Paul W.; Finkel, Eli J.
5. “Can Anyone Be “The” One? Evidence on Mate Selection from Speed Dating” from IZA Discussion Papers, number 2377.
6. http://www.bakadesuyo.com/2013/10/recipe-for-a-happy-marriage-2/
7. http://www.bakadesuyo.com/2011/12/is-5-to-1-the-golden-ratio-for-both-work-and/
8. Terri Orbuch, Finding Love Again: 6 Simple Steps to a New and Happy Relationship
9. John Gottman, The Marriage Clinic: A Scientifically Based Marital Therapy
10. Dan Wile, After the Honeymoon: How Conflict Can Improve Your Relationship
11. Dolan, P., Peasgood, T., & White, M. (2008). Do we really know what makes us happy? A review of the economic literature on the factors associated with subjective well-being. Journal of Economic Psychology, 29, 94–122.