Lying is a bad thing to do, most of the time. But are there cases in which lying is the right thing to do?

When I briefly studied Kant in college, it made me furious because Kant says lying is always unacceptable and impermissible. Which means this would happen: 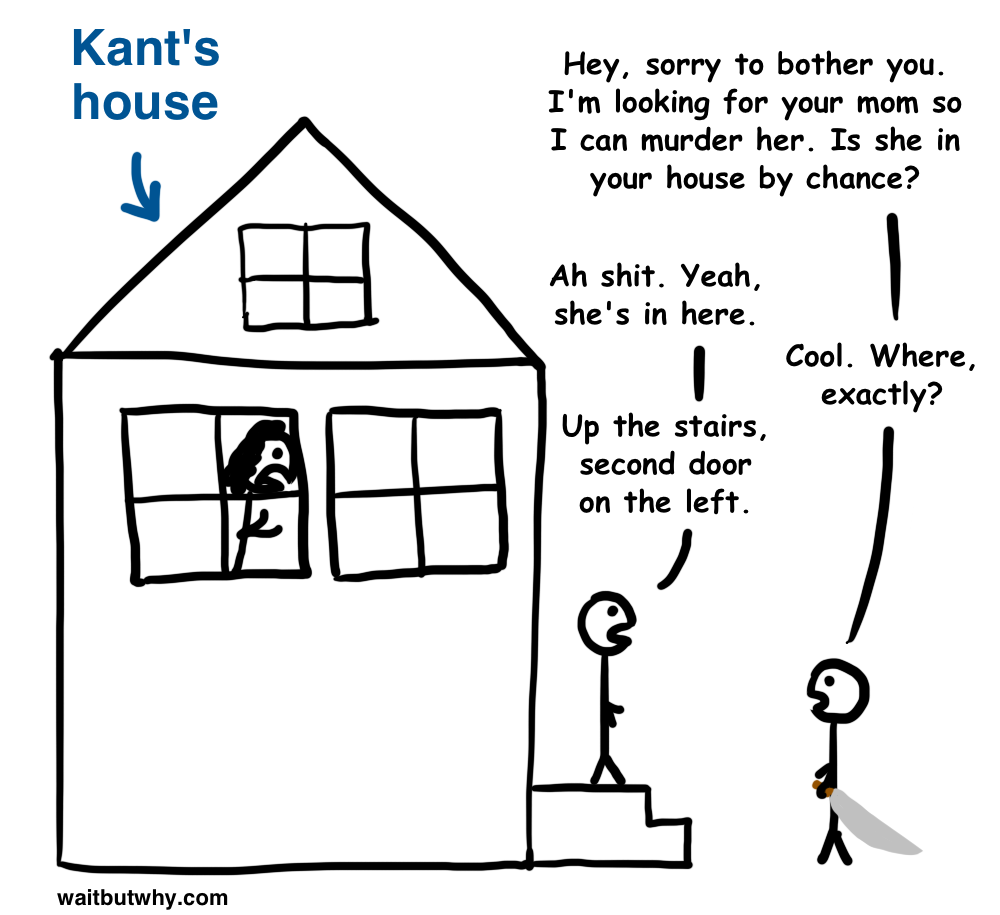 Obviously, lying is sometimes okay. But it’s a slippery slope. I remember hearing a friend once lie to another friend about how much money he and I had just lost at blackjack (it was like $150 and he said $250) in order to make the story even funnier. Not a huge deal—I’ve probably done the same thing other times—and yet, I never quite trusted this friend the same again. That kind of minor but unnecessary lying isn’t a good habit to get into.

So where do we draw the line? When is it okay for the ends to justify the lying means and when should the truth be told at all costs?

Last year, Gerald Dworkin wrote about this in the New York Times and listed 10 lying scenarios he approved of. To aid our discussion, here they are:

1. A man lies to his wife about where they are going in order to get her to a place where a surprise birthday party has been organized.

2. A young child is rescued from a plane crash in a very weakened state. His parents have been killed in the crash but he is unaware of this. He asks about his parents and the attending physician says they are O.K. He intends to tell the truth once the child is stronger.

3. Your father suffers from severe dementia and is in a nursing home. When it is time for you to leave he becomes extremely agitated and often has to be restrained. On the occasions when you have said you would be back tomorrow he was quite peaceful about your leaving. You tell him now every time you leave that you will be back tomorrow knowing that in a very short time after you leave he will have forgotten what you said.

4. A woman’s husband drowned in a car accident when the car plunged off a bridge into a body of water. It was clear from the physical evidence that he desperately tried to get out of the car and died a dreadful death. At the hospital where his body was brought his wife asked the physician in attendance what kind of death her husband suffered. He replied, “He died immediately from the impact of the crash. He did not suffer.”

5. In an effort to enforce rules against racial discrimination “testers” were sent out to rent a house. First, an African-American couple claiming to be married with two children and an income that was sufficient to pay the rent would try to rent a house. If they were told that the house was not available, a white tester couple with the same family and economic profile would be sent. If they were offered the rental there would be persuasive evidence of racial discrimination.

6. In November of 1962, during the Cuban Missile crisis, President Kennedy gave a conference. When asked whether he had discussed any matters other than Cuban missiles with the Soviets he absolutely denied it. In fact, he had promised that the United States would remove missiles from Turkey.

7. A woman interviewing for a job in a small philosophy department is asked if she intends to have children. Believing that if she says (politely) it’s none of their business she will not get the job, she lies and says she does not intend to have a family.

8. In order to test whether arthroscopic surgery improved the conditions of patients’ knees a study was done in which half the patients were told the procedure was being done but it was not. Little cuts were made in the knees, the doctors talked as if it were being done, sounds were produced as if the operation were being done. The patients were under light anesthesia. It turned out that the same percentage of patients reported pain relief and increased mobility in the real and sham operations. The patients were informed in advance that they either would receive a real or a sham operation.

10. We heap exaggerated praise on our children all the time about their earliest attempts to sing or dance or paint or write poems. For some children this encouragement leads to future practice, which in turn promotes the development–in some — of genuine achievement.

So what do you think? Where do you draw your line?