This will at some point be the topic of a longer post, but it’s been on my mind recently, so for now I’d like to bring it to the Dinner Table.

The question revolves around a debate I’ve been following about the nature of our intelligence. There are lots of differing opinions on this, but there seem to be two large camps, with contradictory views.

The first camp—and the one I find myself unable to separate from—believes that intelligence is a spectrum. I’ve illustrated this concept using what I call the Intelligence Staircase: 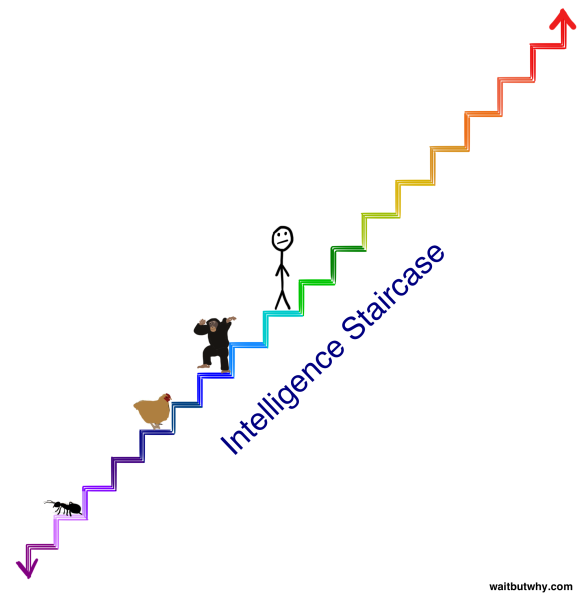 If intelligence is like a staircase, then we’re somewhere in the middle of it. This is weird to think about, because we live on a planet where we’re the most intelligent species.1 All non-human species we’re aware of are on lower steps of the staircase—so it’s hard for us to imagine what it might be like to interact with a species that’s a few steps above us.

If a species (or an AI) were, say, two steps above us on the staircase, it would mean that they were—for lack of a more adult way to say it—as smarter than us as we are than chimps.

Think about that for a second. If a chimp sees a skyscraper, not only can it not build that itself—it can’t even understand that we built it. When a chimp sees something huge, it just sees it as part of nature—and this is how it would be, even if we tried to explain to a chimp that humans can make skyscrapers. So let’s extrapolate that forward: If there were a species two steps above us, not only would we be unable to do what it can do—we wouldn’t even be able to understand that it did it, no matter how hard it tried to explain it to us.

A species a few steps higher would see us the way we see chickens, and this difference in intelligence would grow more and more severe the higher up on the staircase you go.

Say we could create a group of chimps that could live for a million years, and we have the best human teachers spend the whole million years trying to teach the chimps to understand quantum mechanics well enough that they’d be able to, on their own, build a working particle accelerator. It wouldn’t happen. Not possible. A chimp brain is simply not capable of learning something of that complexity, because there’s a ceiling on what a chimp brain can understand.

The ‘intelligence as a spectrum’ theory assumes that there’s no reason to believe that humans have reached some magical point where we’re beyond ever having a ceiling like that, about anything. Humans and chimps are very similar species. If there are things that a chimp could never grasp, even with a million years and great teachers, there must likewise be things even the smartest group of humans could never grasp, no matter how much time and explanation they had access to.

But there’s a camp that disagrees with this. To some, humans aren’t just another animal species. They believe that human brains are information-processing computers in a way other animal brains are not—and that once a species develops the ability to compute, they’ve crossed an important black-and-white line, after which there’s nothing that cannot be sufficiently explained to a human, given enough time.

I’ve heard this view come up again and again—most recently in the words of philosopher David Deutsche, in a fascinating discussion on the topic with Sam Harris.

It makes intuitive sense that there’s nothing so complex that with a million years and a team of the best possible superintelligent teachers, a super smart human would not eventually be able to fully grasp the concept.

But then I think about chimps. And I think about humans. And it doesn’t make sense. After billions of years of evolution on Earth, could it really be possible that just in the last few million years, humans crossed some invisible line such that, unlike all other animal species, we now have no ceiling on what we can wrap our heads around? There’s nothing that fills in the [chimps : quantum mechanics :: humans : ______] blank? Just doesn’t seem right.

This is all pretty closely tied to the many debates about the nature of consciousness and what consciousness is, but to me, this an even simpler and clearer-cut question, and it seems like something we should be able to have a definitive answer on.