A while back, I posted a Dinner Table question about loyalty. The question referred to the concept of someone you knew confessing to you that they committed a crime, and asked if, hypothetically, the crime they confessed to got more and more severe, “At what point would you turn your friend in?” The question also asked how your answer would change depending on your closeness to the crime-confessor.

I sketched out my answer on a graph: 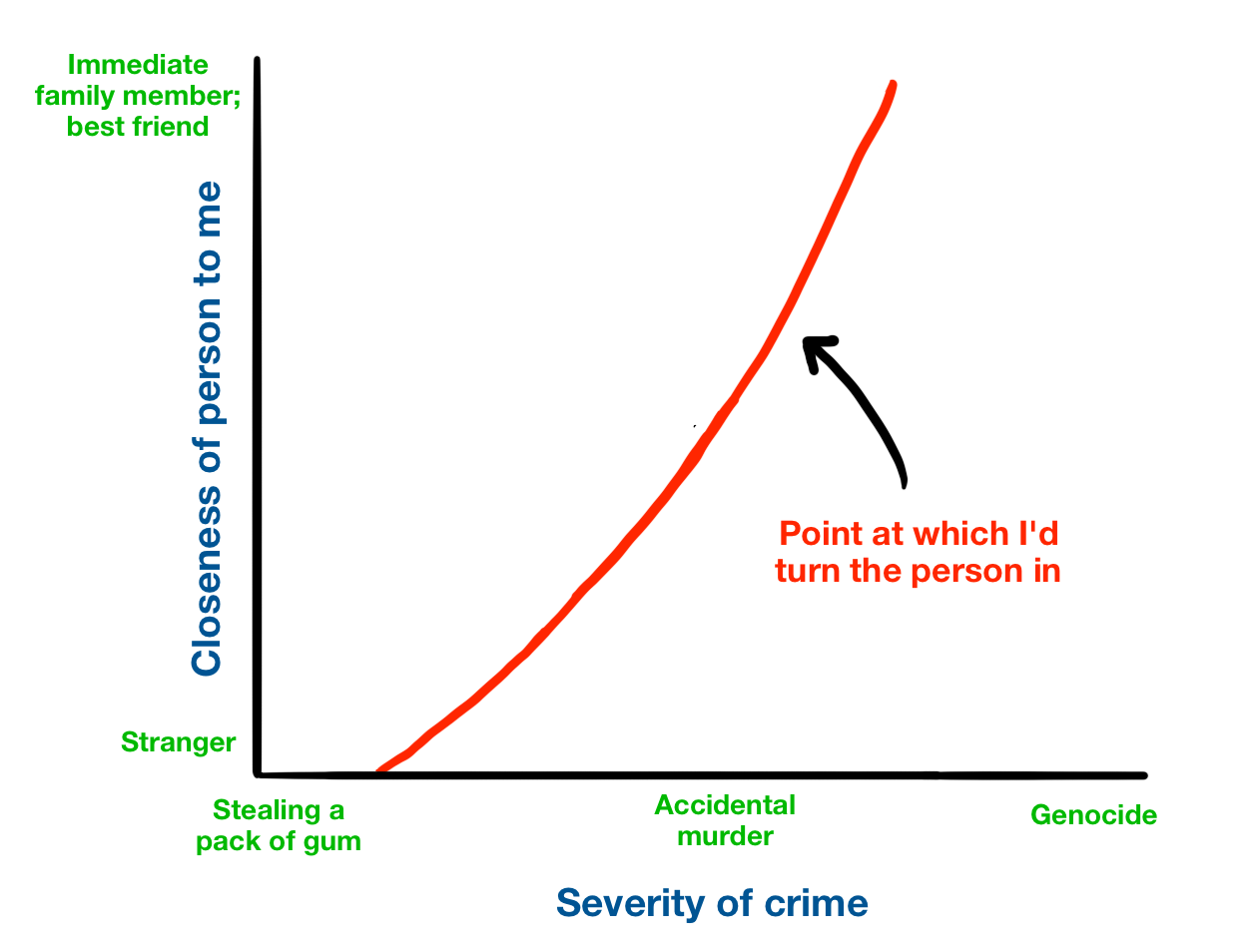 Well this week’s question is kind of the reverse.

Imagine your closest friend is convicted of a crime and sentenced to life in prison, with no chance of a parole. But the thing is, you know for a fact that your friend has been framed and did not commit the crime.

You tell this to the judge, who says he can’t change the decision—but he offers you a deal:

You can go to prison instead, for a sentence of length X, and in return, your friend will be pardoned today. (The prison, by the way, is a standard American maximum security prison.)

The judge hands you an envelope and tells you that it holds a slip of paper with the length X on it—the time you’ll have to spend in jail in order to make the deal. But before you look, you have to tell him the maximum value of X that you’ll be willing to accept. Whatever you say is final: Once you specify your maximum, then if the length of time written in the envelope is that length or shorter, you are committed to accepting the deal and serving that sentence, whatever it happens to be. Likewise, if the amount of time in the envelope exceeds your stated maximum time, the deal is off, and there’s now nothing you can do ever again to save your friend.

So, for example, if you tell the judge that the maximum sentence you’d serve in order to free your friend is one year, and the slip of paper in the envelope says one week, or six months, or one year—the deal is now on, no matter what, and you must serve that sentence. But if the envelope reveals anything above a year—even 13 months—the deal is off, period.

Before you submit your max time, the judge mentions two other things:

1) If X ends up being less than your max time and the deal goes through, everyone will be told the truth of what happened—that you’re in jail because this deal was offered to you, and you accepted it in order to save your friend, whom you believe is innocent.

2) If what’s written in the envelope exceeds your specified maximum sentence and the deal is off, leaving yourself a free person and leaving your friend with the current life-without-parole fate—no one will ever know that this deal was offered to you in the first place.

Then the judge tells you it’s time. He asks you to tell him your maximum acceptable sentence—final answer. So the question for you is:

What would you tell the judge? How long a prison sentence would you be willing to accept in order to save your innocent best friend from a life sentence?

And as a follow-up:

How would your answer change if the falsely convicted person in question wasn’t your closest friend, but just a pretty good friend, or a minor friend, or an acquaintance, or a stranger? How about if the person were your spouse or significant other? Your parent? Sibling? Child?

Tough one. When the question refers to your “closest friend,” I oscillated between 5 and 15 years for my maximum X. 20 seems too high—because you’re kind of getting into “swap my life freedom for my friend’s” territory, which doesn’t seem fair. 15 is the highest I can get to and think, “I might take that deal.” But man…15 years. Not sure I’d do that.

On the low end, after secretly playing around a little with the concept of being a horrible selfish person and saying something super low, I decided that this isn’t one of those times when I’d permit myself to be a terrible person—life in prison for your best friend is just too extreme a concept. I settled on the idea that anything under five years as my maximum seems too low. I imagine having specified, say, a three-year maximum, and then the envelope reveals four years as the required sentence and the deal is off. Four years later, I’d know that both my friend and I could have now been free forever—but instead, because of the past four years of freedom I enjoyed, my closest friend will now spend the next 50 years locked up (depending on his age). 30 years later, my friend would still be in prison, and I’d know that if I had just allowed for a higher maximum, he never would have spent a day in prison, and I’d have been released myself 26 years ago. Couldn’t live with that. Thinking along these lines, even the 5-7-year range is pushing it.

I think I’d settle on 10 years. Yeah I’d feel bad if the paper in the envelope said 11 years—but like, not that bad, cause ya know? 10 years is a fucking lot. Even though in the case of a non-deal, per the judge’s rules, no one but me would ever know I even had the option to do a deal, I think I’d live under the assumption that if my friend knew what happened, he would agree with my reasoning and understand why I kept it to 10 years. On the other side of things, I’d be opening up the possibility that the paper in the envelope says 10 years, in which case I’d be heading off to prison for a decade. Not fun, but I could deal with that. I’d only be a decade older when I got out—I could still start a family and live most of the life I currently plan to, I’d have the benefit of a whole different kind of life experience, I’d have read a ton of books, and I’d never have to buy a drink again because my friend would be buying me all my drinks for the rest of my life.

As for the follow-up question—it gets even harder. Family and significant other scenarios are a real nightmare to try to figure out for this. Easier are lesser friends. For me, the 10 year number drops pretty steeply once we move down the friend tiers.

I’ll throw my answers for all of it on a graph:

The stranger thinking was interesting. My immediate thought was to say basically nothing, but then I considered the actual situation, where I, and only I, could save someone’s life by doing a month in prison, and I think I’d probably do that. I might even do more once I consider the automatic selfless-beloved-hero status you’d get to enjoy forever after serving the sentence. The spouse part is an extra mindfuck, because what would happen is you’d head off to jail basically forever, while they’d end up getting remarried and starting a family with someone else. And I’d be like huh? wait no I don’t want to do this anymore. Of course, I’m saying that imagining a younger married couple without kids yet. Thinking about 50 with a family would be a different thought process. Finally, I’m assuming I’d say I’d go to jail for life if need be to spare my child losing their whole life, but only because clearly everyone becomes nuts when they have kids. As a currently childless person, I can’t think of anything shittier than going to prison forever for some not-that-compelling five-year-old. Spending life in prison without parole will build their character anyway, so it’s not the end of the world.