On Tuesday night, after tossing and turning for a couple hours, I said fuck it and grabbed the laptop and started typing. What came out was a post called It’s Going to Be Okay. The next day, the post was read by over a million people.

The reactions were intense, and most of what I heard boiled down to one of these two things:

1) This made me feel better.

2) You got this really wrong.

For the people who reacted the first way, the post felt like a reminder of the big picture—the fact that America was built to survive a guy like Trump, no matter what he has in mind for the next four years, and the fact that the nasty parts of Trump, his campaign, and his constituency are only one part of the story here.

The people in the second category thought I was painting much too rosy a picture. Some people pointed out that as a white cis heterosexual male, I far too easily brushed off the fears that many other people are currently feeling. Others were livid that I seemed to approve of Trump’s choice of Pence as a running mate. And some couldn’t believe that I failed to mention the environmental impact of the election at all.

My main feeling as I read through all the reactions was, “This is why Wait But Why posts should take at least a week to write.”

A long post created over a bunch of days allows for me to paint a complete picture of what I think and work through a topic with all the nuance it warrants. A short post, typed out quickly and emotionally at 4am, without the usual many hours of deep thought and rigorous outlining and careful wording, does not.

The result was an imperfect post that I think failed in some ways and succeeded in others. Over the past three days, like many of you, I’ve read a bunch of articles about the situation, talked to a lot of people about it, and done a lot more thinking. It’s been an emotional rollercoaster. Here are some things I’ve been thinking:

1) God I wish Hillary Clinton were the president-elect.

Or Bernie Sanders. Or Marco Rubio. Or Jeb Bush. Or John Kasich. Or literally any normal fucking politician.

2) In trying to focus on what I felt was an optimistic long-term outlook, I totally under-acknowledged the way a ton of Americans feel right now.

Some of the most hateful parts of our society—which over recent decades have been increasingly relegated to the fringes—have been made to feel a lot less fringe by the election of a man who has spent the last year validating their beliefs and nodding towards them with a wink. Hateful behavior being thought of as shameful and taboo is a big part of what prevents it from happening, and when the president signals that he’s not ashamed to think and speak in that way, it quickly normalizes the behavior in many people’s minds. This reality was articulated well in many blog comments, and in an email I received from my friend Billy Wheelan in response to my post:

When some guy yelled out “hang Obama!” during Trump’s acceptance speech, I wasn’t the only one who heard it. When my friend posted on Facebook that after not enduring it since the age of 11 he was called a faggot two separate times today walking in his neighborhood, he wasn’t misremembering his day. Muslims and trans kids aren’t bugging for no reason. They are reacting rationally given the context of their life experiences to a set of stimuli that isn’t affecting you the same way it’s affecting them.

This is a disturbing and scary time for many people to be in America. My one paragraph about this topic—which was focused on the long-term outlook—carelessly glossed over the current state of things. I’m sorry.

3) Three days after writing my post, this sentence—”I’d predict that President Trump is all about surrounding himself with experts who know very well how to run the executive branch”—is looking pretty not accurate.

It’s too early to know what Trump’s eventual cabinet will look like, but early reports have me looking at news headlines and saying, “What the FUCK.” Trump is an extreme ends-justify-the-means guy—even for a politician—and what makes that most unsettling is we don’t really seem to know what his ends are. It’s not even clear that he knows what his ends are. Crossing my fingers that I’ll look back on this and see that I was overreacting.

4) I still think this country is ready for a female president.

But the term I used—unbelievably ready—may have been a little much. I think we’re ready for a female president to the extent that we’re ready for a black president. Obama definitely lost a good number of votes in 2008 and 2012 because of his race, and Clinton definitely lost a good number of votes this election because she’s a woman. In 2016, being a woman adds in a hurdle that’s not there for men—I just don’t think the hurdle is insurmountable. Some people argued that if Hillary were a man, she would have won. Perhaps. But I’d also continue to argue that if she had Michelle Obama’s personality, and/or fewer scandals in her past, she’d probably have won as well.

5) I still think we shouldn’t group all Trump voters together and demonize them all as horrible people.

Imagine an election between Ted Cruz and a charismatic Democrat in a year when a Republican had been in office for the past eight years. Now imagine that the Democrat has this awkward quality where he often says horrible, disparaging things about religion and evangelical Christians in particular. Can’t you imagine a bunch of staunch Democrats voting for him despite wishing he weren’t so nasty about religious people? They’d justify it because A) a Ted Cruz presidency sounds like a nightmare to him, especially knowing that he’d nominate ultra-conservative justices and do his best to overturn abortion laws, B) they’re not religious and don’t know any super-religious people, so they’re not as sensitive to the vocal criticism of evangelical Christians as others might be, and C) they’re feeling scared and just really badly want a Democrat in office. Would they feel guilty about voting for kind of a nasty candidate? Probably. Would many of them vote for him anyway? Probably. Would that make those voters hateful people? Not really.

I know these situations aren’t perfectly analogous—I’m making the point that voting for a candidate does not imply that you espouse all of his or her views. People often hate some of a candidate’s views and still find reason to grit their teeth and cast their vote. A little over 60 million Americans voted for Trump—or about 19% of the country. While a good contingent of those are definitely what Hillary called deplorables, I’d imagine that a bunch of the Trump voters are simply conservative Republicans who care deeply about Supreme Court appointments and hate high taxes and are feeling scared and frustrated and just really wanted a Republican in office—and they felt strongly enough about it to vote for Trump, despite being uncomfortable with the man he is and the way he campaigned. This isn’t letting them off the hook for the consequences of their vote—only saying that it’s probably not correct that all Trump voters are hateful people.

6) Some of what liberals are upset about was inevitable.

Putting Trump himself aside for a second—politically, what I saw Tuesday night is an inevitable shift of tide. In American politics, the party zig-zag is one of the most reliable patterns you can find. Over the last century, one political party has maintained power for over 12 years straight exactly once—the 20 years Democrats were in power between 1932 and 1952—and that was a time of exceptional circumstances because of World War II. It’s been a full zig-zag.

This makes sense. In any given year, most people in a country feel like they want a better life, so once one party has been in power for a while, it’s a layup for the other party to run for office successfully on a platform that essentially says, “If you’re satisfied with your life how it is, continue voting for the party that’s been in power—if you’d like a better life, vote for us.” Further, when one party is in power for an extended period of time, citizens of the other party begin to feel increasingly frustrated, desperate, and disenfranchised—which translates to increasing political support for the party out of power, while successive wins for the party in power leaves those voters increasingly complacent and overconfident.

Liberals are upset about a lot of things right now, but a large number of them simply amount to the fact that the Republican Party has inevitably regained control of the government. People’s horror over what will now happen with the Supreme Court, climate change policies, and the gutting of Obamacare, for example, would be no different if a far less offensive Republican—say, Marco Rubio—had won the presidency. And history tells us that if the Republicans hadn’t taken over this year, they probably would have four years from now. So a blow to the liberal agenda in all these areas was predictable. These various causes were never going to simply remain on a steady progressive path—not in this country.

That doesn’t mean liberals shouldn’t be upset about having their most important causes in jeopardy. It just reinforces the fact that if you don’t think you can convince voters of the other party to agree with you about an issue, then government policies regarding that issue will only be on your side half the time—and you should focus on solving the problem outside of government, if at all possible.

7) When I feel long-term optimistic, it’s because I’m thinking about my graphs from this post.

In the post, I talked about how humans are normally on what I called Step 1 of consciousness—and how it should be our goal to try as much as possible to see things from Step 2, a place with a higher vantage point that provides a more zoomed-out view. Then I compared how good and bad events look from those two steps: 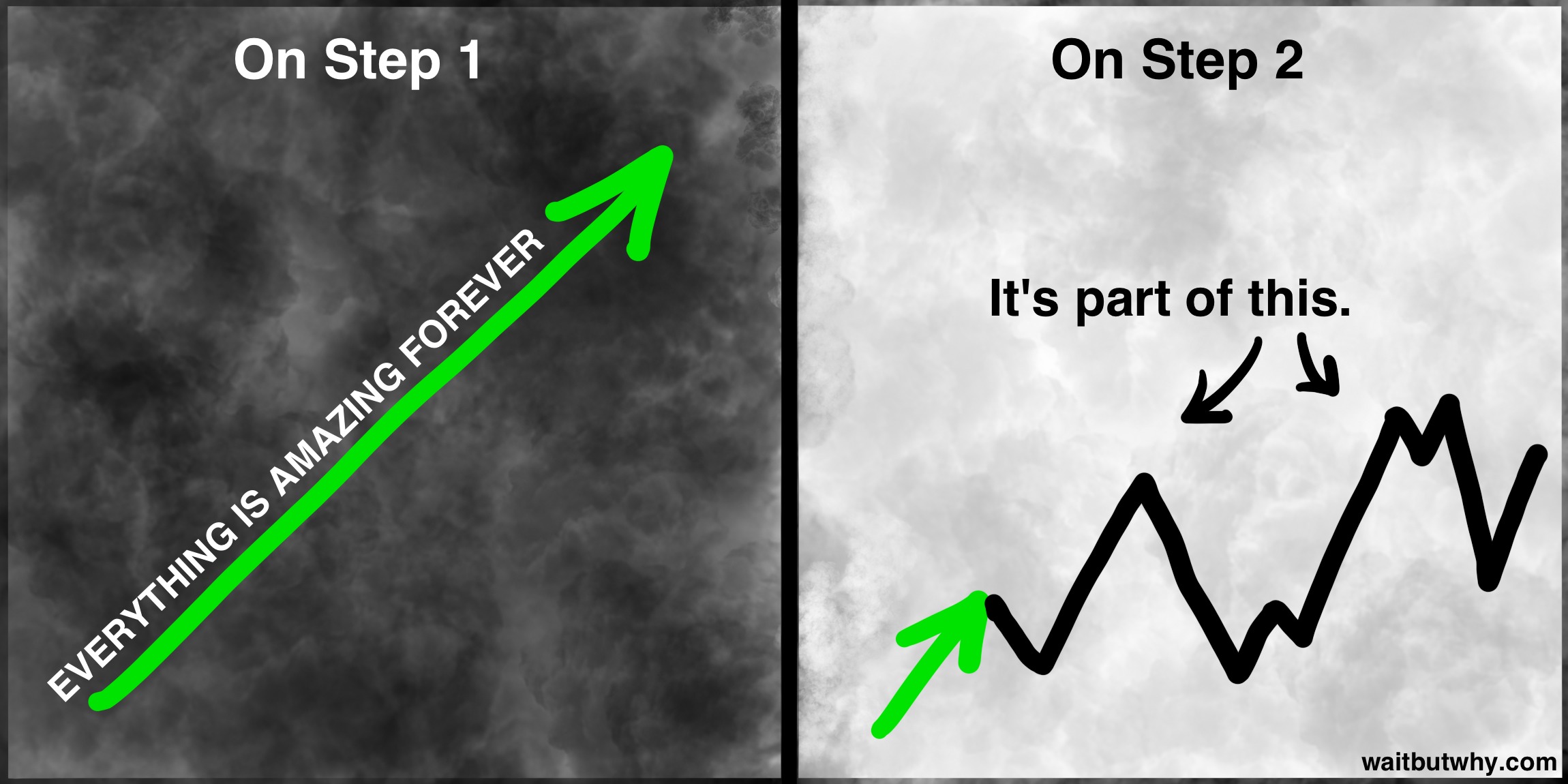 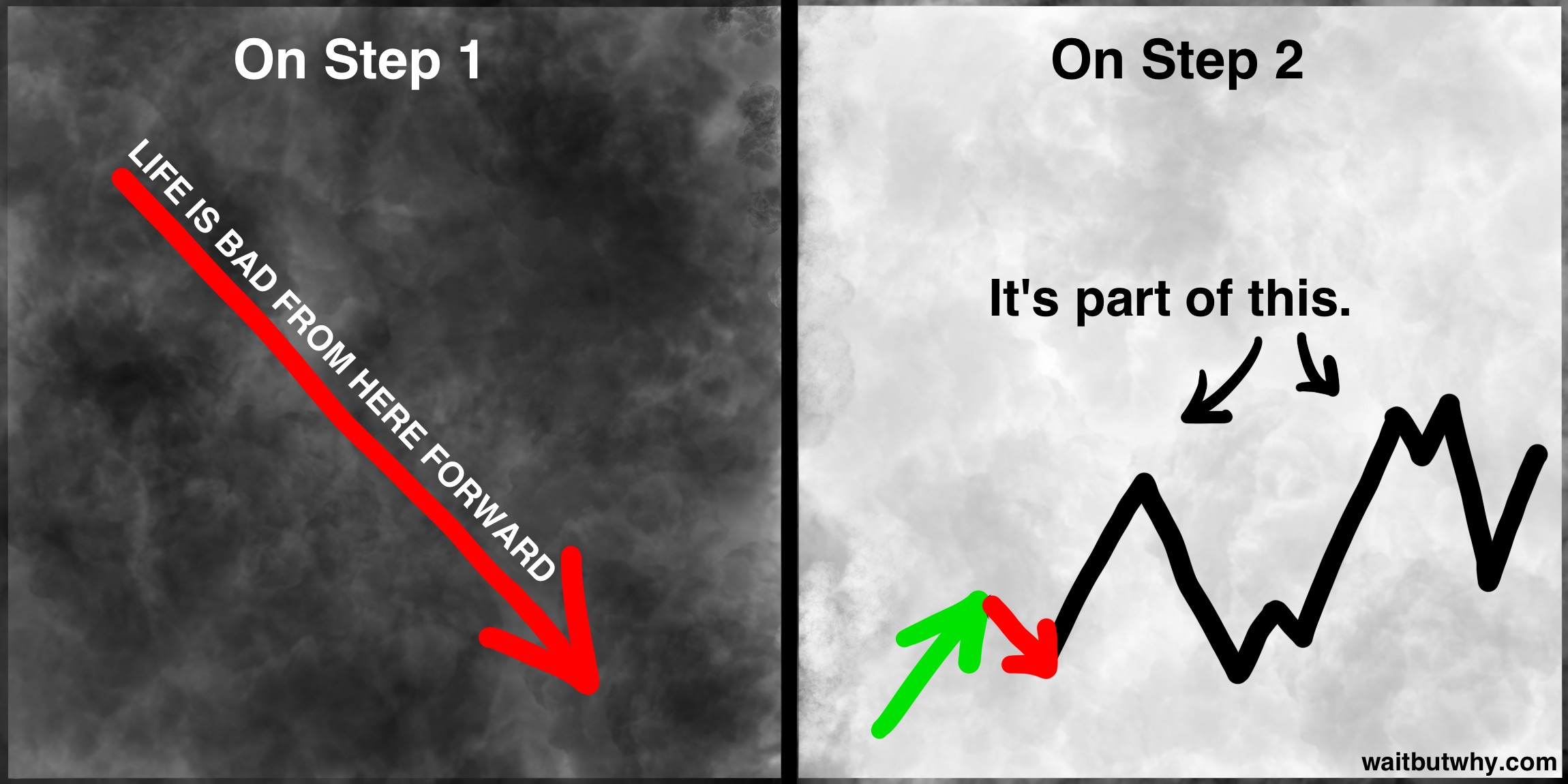 To distract yourself from life, here are five of the silliest Wait But Why posts:

12 Types of People You’ll Find in Every Hostel

Why Bugs Ruin Everything