Thanks to reader Michael M. from Houston for today’s question. Here’s how Michael put it:

I often find myself wondering: if I could live for any single day in the history of mankind (from anyone’s point of view), what day would I choose to live? 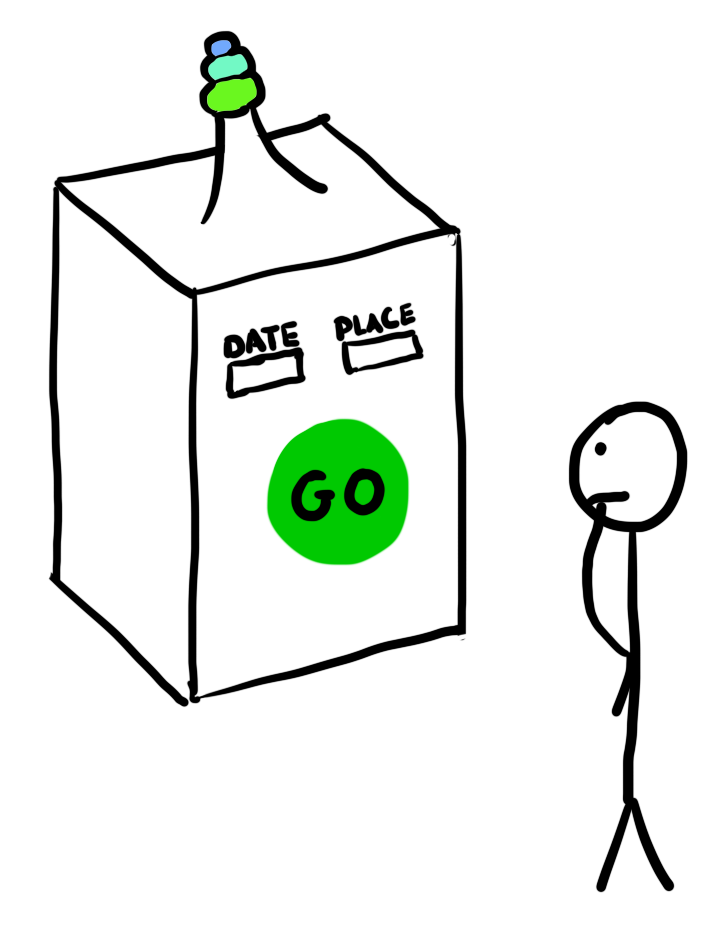 For example, November 22, 1963 and from the point of view of a spectator in Dallas. I don’t buy into the conspiracy theories, but it would be weirdly fascinating to see what happened and how it all played out — maybe take a look around the grassy knoll or follow Lee Harvey Oswald’s exit from the book depository.

Or July 21, 1969 and from the point of view of Neil Armstrong himself as he walked on the moon.

Or maybe I’d be Abraham Lincoln on the day he delivered the Gettysburg Address. We all practiced that speech in school, so how awesome would it be to actually give it!

Or I could be a visitor to the Roman Senate on the Ides of March. Begin the day by exploring ancient Rome and then end it by watching one of the most important assassinations in the history of the world. Popcorn optional.

I think part of the rule has to be that you can’t meaningfully interfere with what happened on that day — otherwise we’d probably all be morally compelled to go back in time and kill Hitler circa 1929.

1) I’ll add a follow-up question about which date you’d pick in the future. So let’s say this: You have a time machine that allows you to enter a specific date and location, and you’re taken then/there for one day (it teleports you to the location too). You arrive at 6am and 18 hours later, at midnight, you’re safely returned to the present day in your home. It can be used once to bring you to the past and once to the future. Then it disappears.

2) I like the idea of actually being in the eyes of a person in history, but let’s say you can also choose to just be you plopped down there if you want to.

A couple other notes:

Buried in a post right now, so perfect time to write a really long response here.

I was gonna pick the Jesus one but I just changed my mind to the Hitler one.

Going only 30 years into the future would be insanely interesting. The world might be totally different, but I’d also still probably understand things enough to quickly be caught up to speed. The world would still (probably) have the countries I was used to, I’d understand the language, and I could connect the dots enough to really get how our next three decades end up playing out. You’d learn a ton, but it would (probably) still leave a lot of mystery about where humanity is headed and the nature of the universe. We still might have a Fermi Paradox and it still might be a pre-ASI world.

Going 100 years in the future would undoubtedly be beyond belief—the technology we’d have, the things we will have learned, the way our present era will look through the clarity of 100 year hindsight… And while 30 years from now, the culture might resemble that of today, the culture of 100 years from now—the social norms and taboos, the music, the advancements in philosophies on life and happiness—would be vastly beyond our world and amazingly enlightening to learn about. I’m tempted to choose 100 years. 30 years has the possibility of being cool but not that cool, while 100 years would most definitely blow your mind.

It would, of course, be tempting to just go for it and pick 500 years or 1,000 years or something outrageous like 50,000 years in the future. But my worry is A) that humanity won’t be around, which would be so, so, so depressing, B) that I’ll learn of our demise or something else that will kind of ruin the rest of my life back in the present, C) that I simply won’t be able to comprehend the world then, and I’ll spend the whole day baffled and confused and just not get it.

It would be hard to not choose 1,000 years ahead because just imagine how interesting that would be. But I’d probably go with 100 years ahead—the year 2115—because that seems both boggling and potentially fathomable, while also leaving at least a reasonable chance that humans still exist.1 (I’d also take note of which companies to make sure I invested in over the coming decades.)

I think there’s an argument to just skip going to the future, since the downside of going might be higher than the upside—but nahhhhhh.