It’s finally the 2020s. After 20 years of not being able to refer to the decade we’re in, we’re all finally free—in the clear for the next 80 years until 2100, at which point I assume AGI will have figured out what to call the two decades between 2100 and 2120.

We now live in the 20s! It’s exciting. “The twenties” is super legit-sounding, and it’s so old school. The 40s are old. The 30s even more so. But nothing is older school than the Roaring 20s.

We’re now in charge of making this a cool decade so when people 100 years from now are thinking about how incredibly old-timey the 2020s were, it’s old-timey in a cool appealing way and not a boring shitty way.

It’s also weird that to us, the 2020s sounds like such a rad futuristic decade—and that’s how the 1920s seemed to people 100 years ago today. They were all used to the 19-teens, and suddenly they were like, “whoa cool we’re in the twenties!” Then they got upset thinking about how much farther along in life their 1910 self thought they’d be by 1920.

In any case, it’s a perfect time for one of those “shit we’re old” posts.

When World War 2 started, the Civil War felt as far away to Americans as WW2 feels to us now.

Speaking of World War 2, the world wars were pretty close together. If World War 2 were starting today, World War 1 would feel about as far back to us as 9/11. 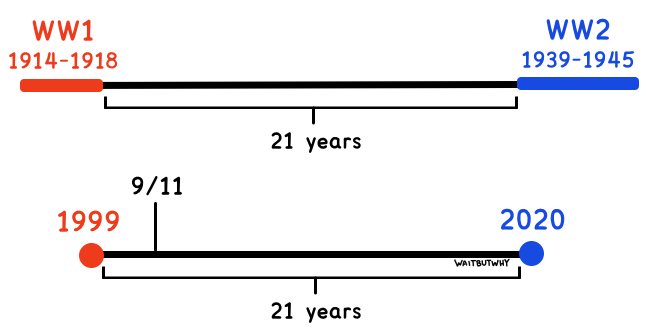 Moving on to more inane topics, there have been more Super Bowls since the 1993 Cowboys–Bills SB than before it.

And West Germany’s 1974 World Cup victory happened closer to the first World Cup in 1930 than to today. 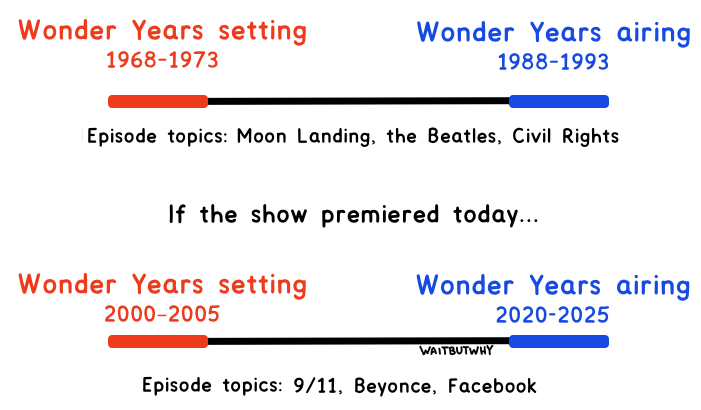 Also, remember when Jurassic Park, The Lion King, and Forrest Gump came out in theaters? Closer to the moon landing than today.

Meanwhile, the O.J. Simpson trial is now half way between the 1960s and today. And closer to the Charles Manson trial.

There are a lot of options for that kind of calculation, but those two seemed like the most depressing to me. Worth mentioning that my 94-year-old grandmother was born closer to the Andrew Jackson administration than to today.

If you were born in the 1980s like me, a kid today who’s the age you were in 1990 is a full 30-year generation younger than you. They’ll remember Obama’s presidency the way you remember Reagan’s. 9/11 to them is the moon landing for you. The 90s seem as ancient to them as the 60s seem to you. To you, the 70s are just a little before your time—that’s how they think of the 2000s. They see the 70s how you see the 40s. And the hippy 60s seems as old to them as the Great Depression seems to you.

But the weirdest thing about kids today: most of them will live to see the 2100s.

Sorry if this stressed you out. Happy New Year!

P.S. Chapter 10 of The Story of Us coming next week

If you like timelines, you should probably head here next.