Last week, we sent out a survey to Wait But Why readers on social media about who they’re voting for in the 2016 US election.

The results are now in. Looking at the responses state by state, here’s the breakdown of the WBW electoral map: 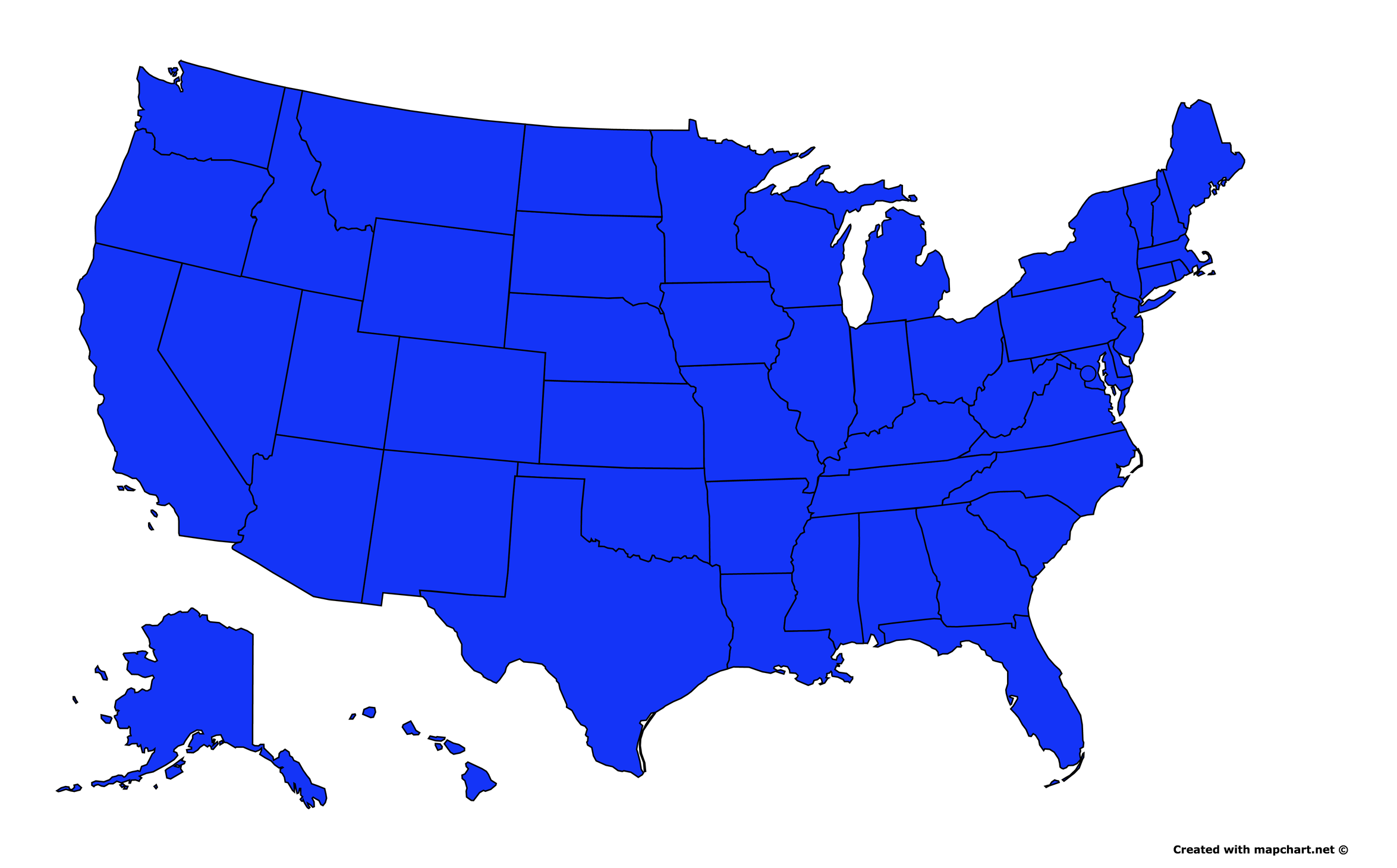 Take your time examining it.

But just because the majority of WBW readers are voting for Hillary in every single state doesn’t mean every WBW reader is voting for Hillary. In fact, tens of thousands of them aren’t. Here are the complete results (this includes all the non-US WBW readers, whose percentages almost exactly mirrored those of US readers): 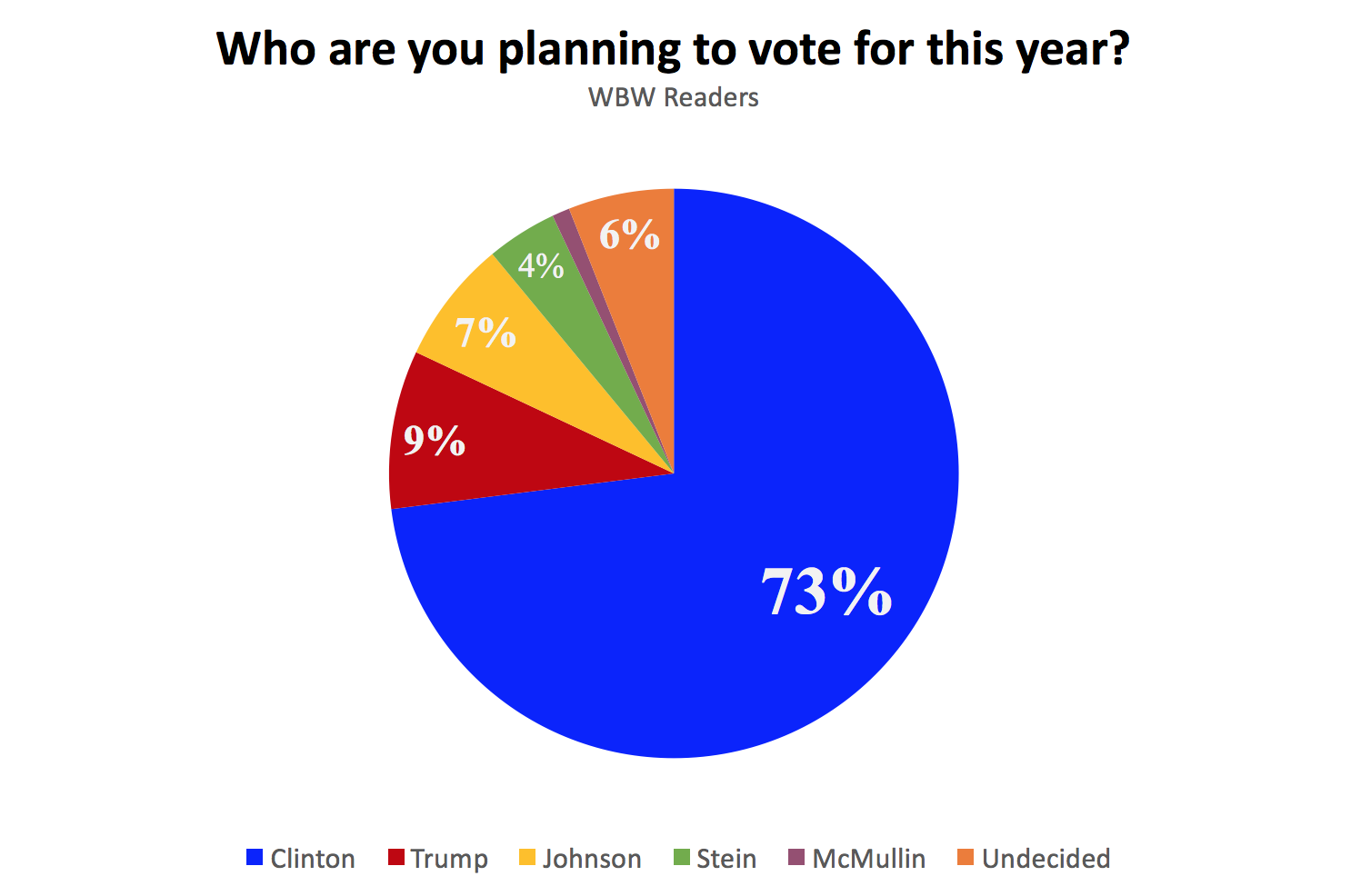 Here’s how WBW voters (excluding those who answered “Undecided” or “don’t care / not voting”) compare to the expected popular vote (data from FiveThirtyEight): 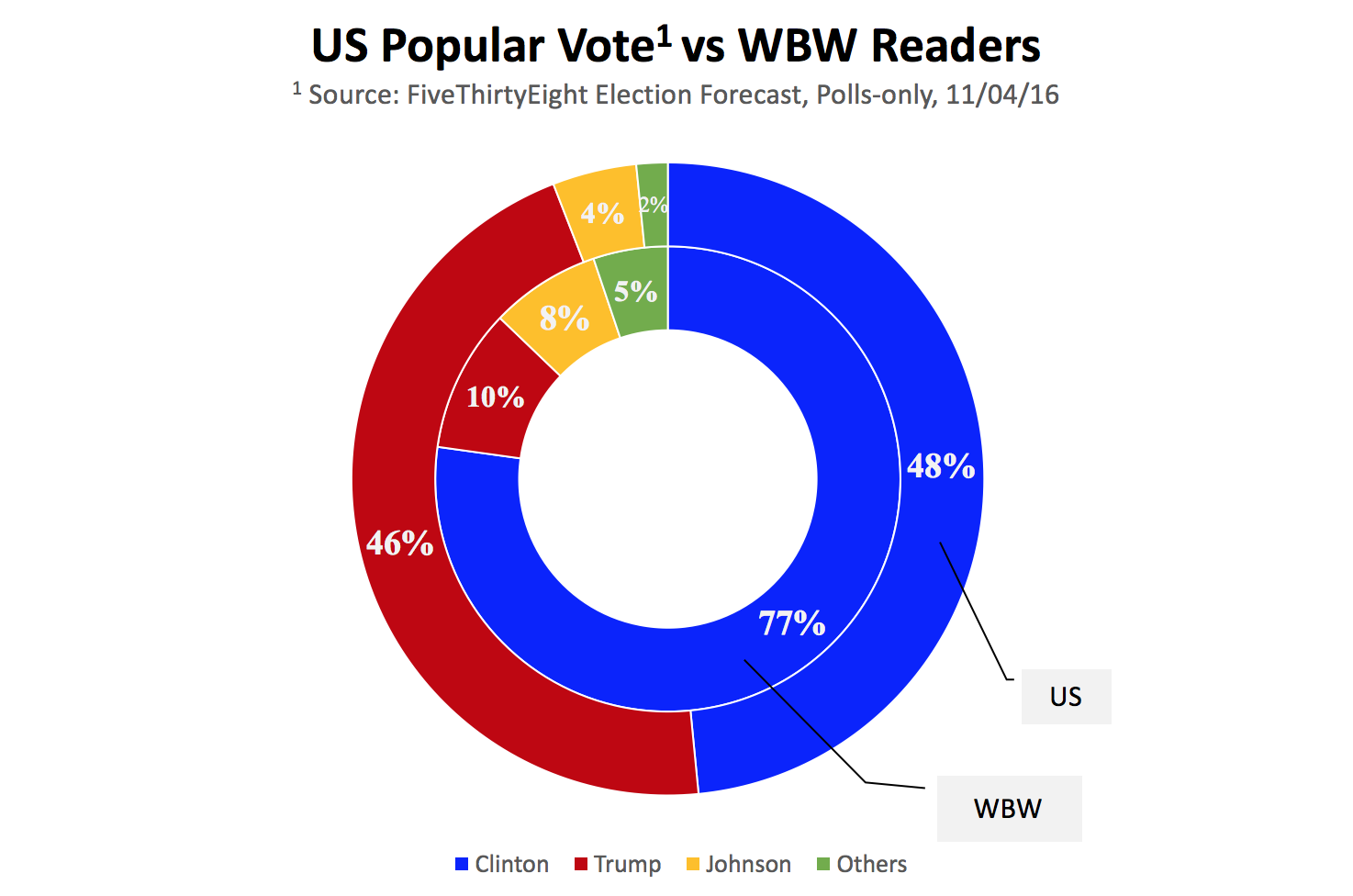 Since we already learned that Hillary wins every state in a WBW election, more interesting is this map, showing which candidate came in second place in each state among WBW readers: 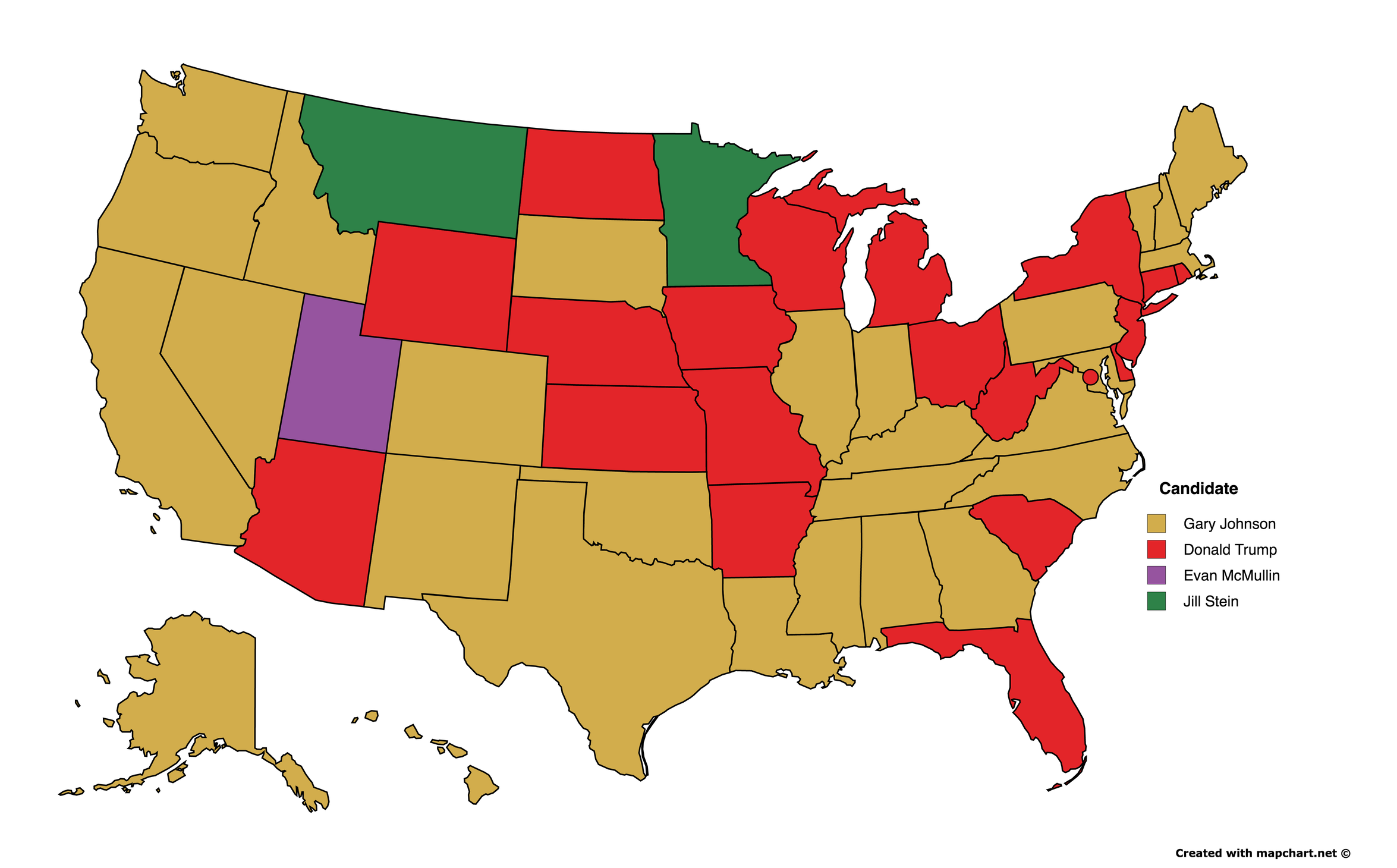 We also wanted to break things down among WBW readers who have consistently voted for one party in the past. So we asked people to tell us how they voted (or how they would have voted if they could) in past presidential elections. Of interest to us were “party voters”—people who voted with the same party for the last five elections.

Here’s how historically loyal Democrat WBW readers—people who voted or rooted for Obama, Kerry, Gore, and Bill Clinton—are voting in this year’s election: 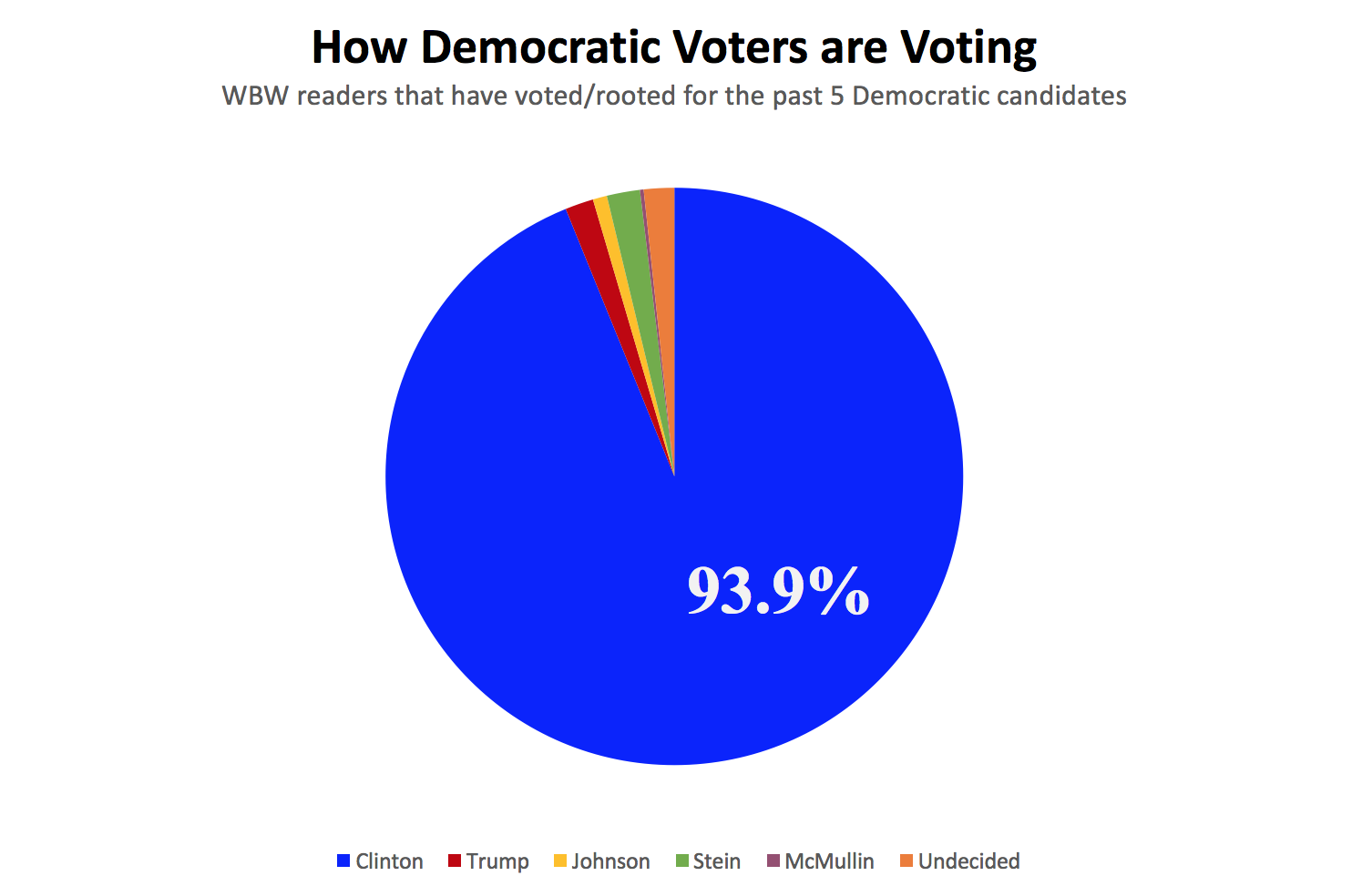 Pretty definitive. Still, 6.1% represents thousands of staunchly Democratic WBW readers who are not voting for Hillary—most of them, I imagine, supported Bernie Sanders.

Here’s the breakdown among historically Republican WBW readers—people who voted or rooted for Romney, McCain, Bush, and Dole: 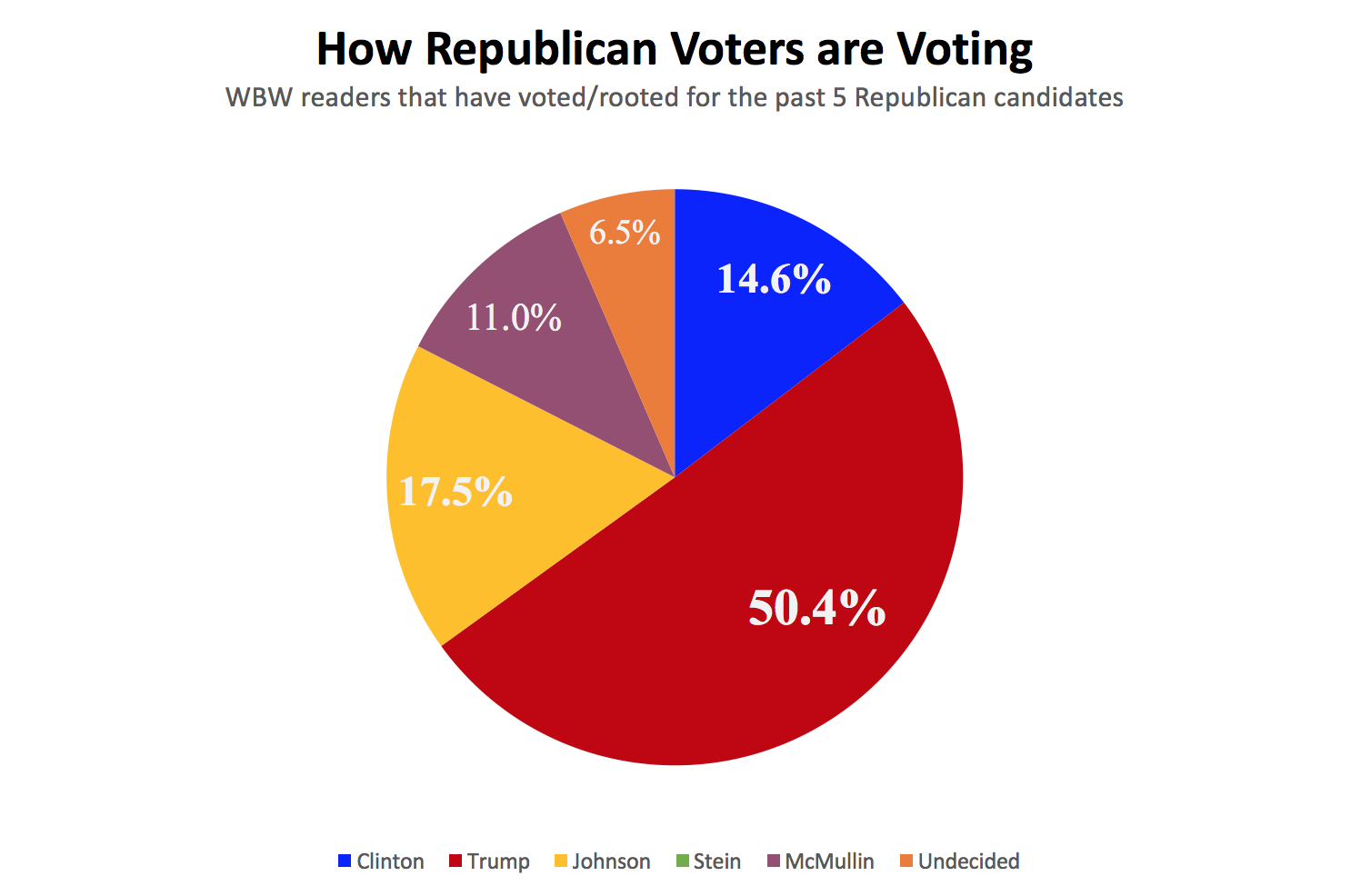 So about half of WBW’s staunch Republican voters are going for Trump, with the other half defecting elsewhere. About 1/7 of WBW’s loyal Republicans will be voting for Hillary—their first vote for a Democrat for president in over 20 years, if not their first ever.

Finally, we were interested in enthusiasm. So we asked this question in the survey:

What’s your honest private opinion about the person you’re voting for?

Here’s how WBW readers feel about the candidate they’re voting for: 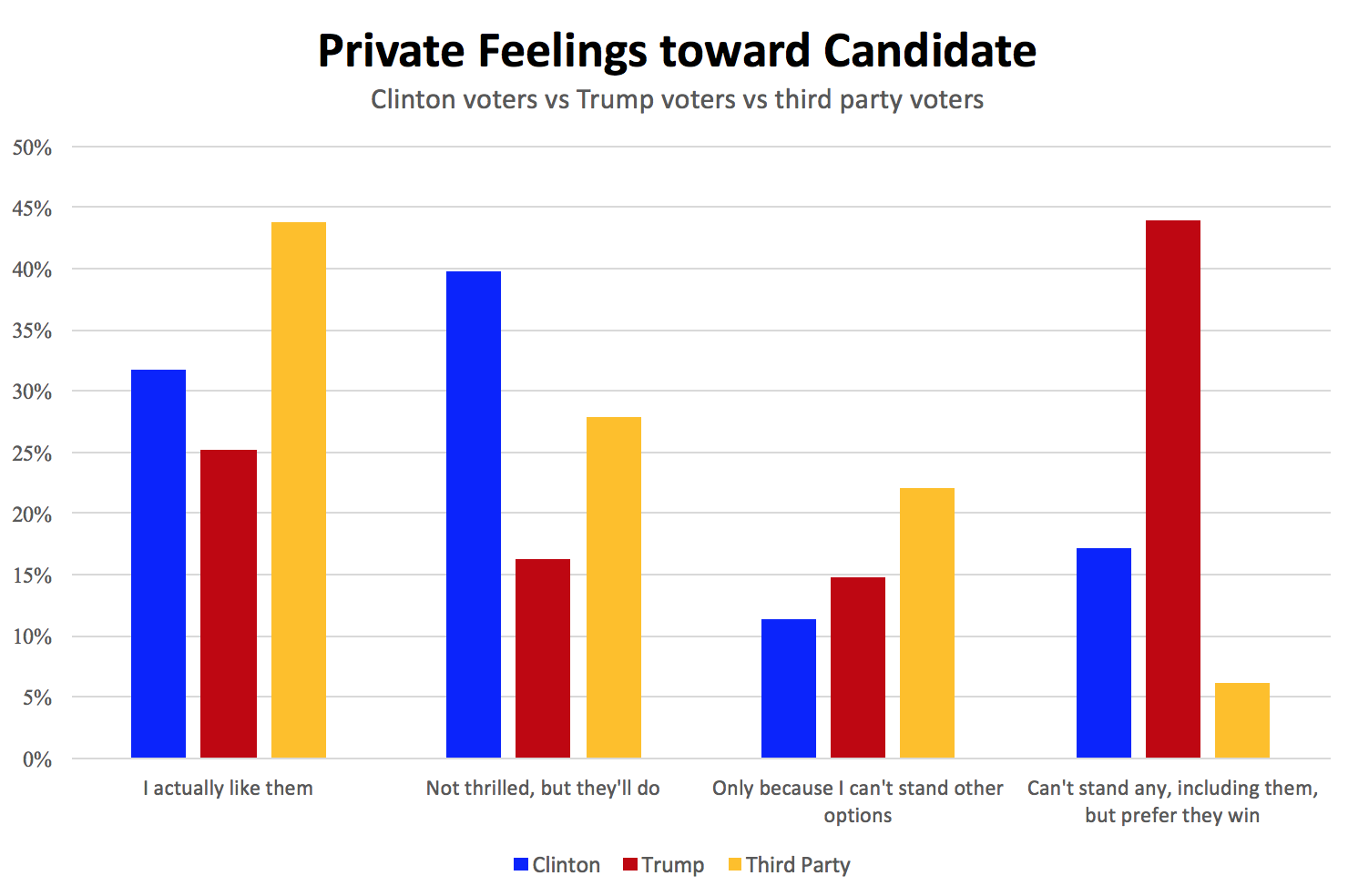 So most of us are voting for someone we don’t really like. Nice job everyone.

And a WBW post on the first 16 US presidents: The American Presidents: Washington to Lincoln