In the recent mailbag post, one of the reader questions I answered was about my Myers-Briggs (MBTI) type.

I answered that I had tested as an INTP, something that seemed to surprise no one. (Since then, I took a different version of the test, which told me I was an ENTP, perpetuating my lifelong confusion about whether I’m an introvert or an extravert.)

Anyway, at the end of my answer, I included a link to a survey asking Wait But Why readers about their own MBTI type (along with a link to a quick online MBTI test for those who didn’t know theirs). Just under 6,000 people answered the survey, and the results were pretty interesting. We’ve broken them down below.

First, a little more about the test. MBTI is probably the most famous personality test. It assesses people on four different binary criteria, assigning them to one side or the other in each, grouping everyone who takes it into one of 16 four-letter types. The Myers & Briggs Foundation describe the four areas like this on their website:

Myers-Briggs is hugely controversial. Some experts swear by it. Many businesses rely on it for key hiring and management decisions. 2 million people take it every year. But many others feel the opposite, claiming the test is misleading, meaningless, and “sciencey snake oil“.

One such critic is Wait But Why’s friend Adam Grant, a best-selling author and Wharton’s top-rated professor, who wrote me this email after I published the mailbag post:

Loved your mailbag, until the sickening moment when you took the MBTI.

Turns out Adam has written multiple articles about why the MBTI sucks. This led to us having a technically-challenged discussion about the MBTI in Central Park, so Adam could explain to me why he disliked the test.

And that’s all fine—but you know what? I still like the test. Sure, maybe it’s a little not real. And no, it probably shouldn’t be used to hire people. But when it comes to taking a free online test for 10 minutes and then sending that same test to all my friends and family to make them take it and then permanently branding all of them in my head with their four-letter type and then using that information to make reckless oversimplifications about who they are—it’s my favorite test in the world.

And another good use for it? Assessing Wait But Why’s readership and comparing it to the rest of the country.

So without further delay, here are the results:

5,944 people took the survey. Here’s how they broke down: 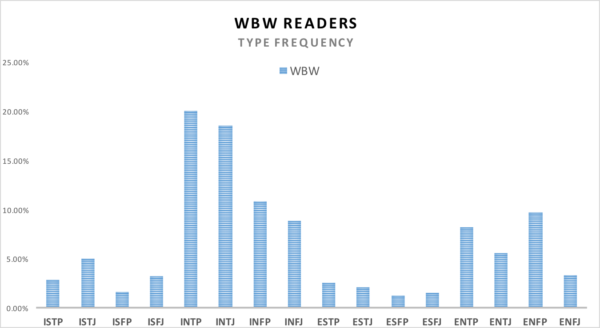 So over a third of WBW readers said they were either INTP (20%) or INTJ (18.6%), while ESFP was the least popular answer at 1.2%. Now let’s order these from most to least common: 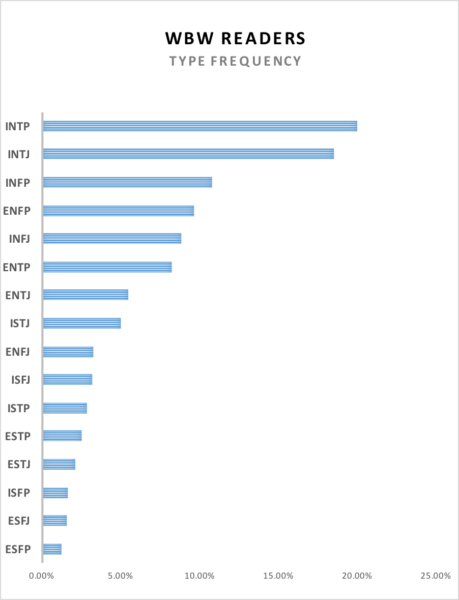 What’s the main thing I see here? N’s. Lots and lots of N’s. In fact, the seven most common WBW reader types have an N in them. I don’t know MBTI that well, but I think that means WBW readers tend to be outrageously heady.

Now let’s look at the MBTI breakdown of the whole US. These are the results of a Myers-Briggs survey of the US between 1997 and 2002: 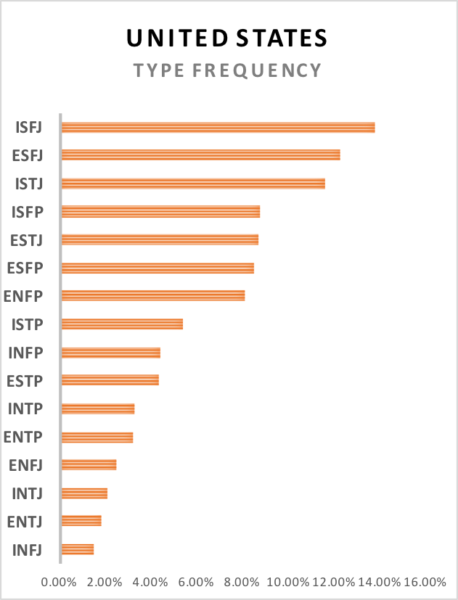 What do I see here? S’s. So many S’s. It’s the reverse of the WBW results—the six most common types across the US have an S in them. And the INTP’s and INTJ’s that dominate the WBW readership? Turns out those are pretty rare types in the general population, while the ESFP’s that were nowhere to be found in the WBW survey are pretty common in the real world. (Note: Only about half of the WBW respondents were from the US, but there was very little difference between the US-only WBW results and the complete WBW results—so we felt fine comparing the worldwide WBW readership to the US MBTI results.)

Let’s put both sets of results on the same graph (in order of most common to least common among WBW readers): 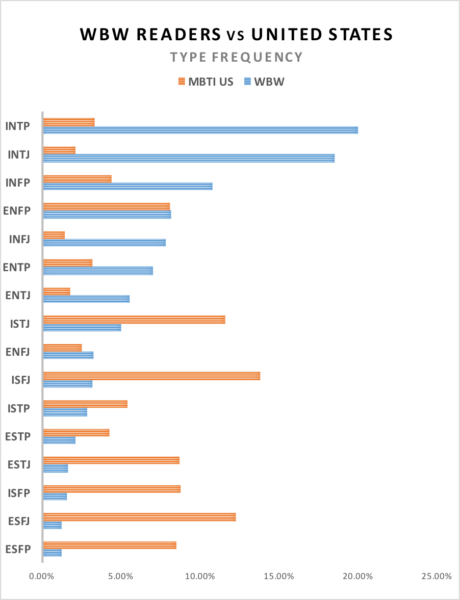 Pretty not similar. And if you’re an ENFJ, congrats—you manage to be the only type that’s rare among both sets.

Let’s take a look at each of the four criteria on its own, for both WBW readers and the whole US:

So WBW has significantly more Introverts and Thinkers than the general population, but again, the most striking contrast is in the N/S comparison. N’s make up only 26.7% of the US but a whopping 81.3% of WBW readers.

So there you have it. And I had fun. Take that, Adam Grant.

I’ll leave you with a chart I’m sure will make all MBTI critics furious. Make sure to follow it strictly for all relationship decisions: 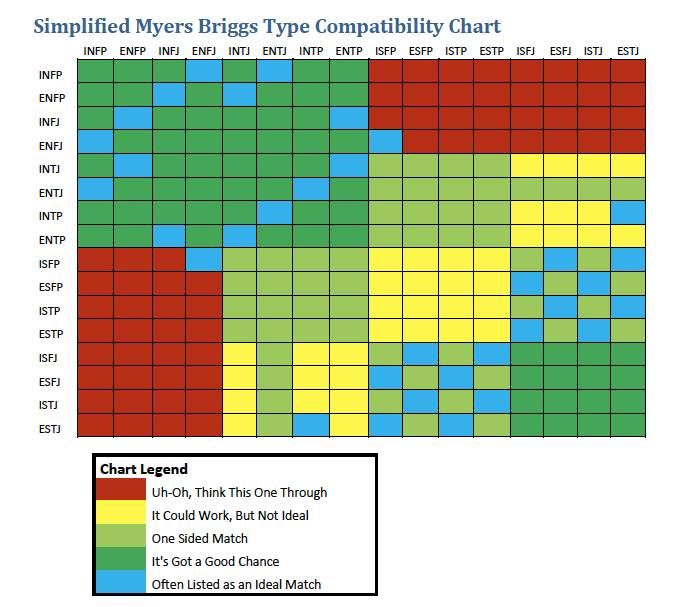 Two deep dives into the human mind for all of you N people:

Religion for the Nonreligious – an attempt to be more conscious

Sign up for the Wait But Why email list and we’ll send you the new posts right when they come out. It’s a super unannoying list I promise.

Huge thanks to our Patreon supporters for making this series free for everyone. To support Wait But Why, visit our Patreon page.