The Panama Canal was built because what could possibly be more annoying than shipping something from from San Francisco to New York (or Tokyo to London) by going all the way around South America. The canal would save ships almost 8,000 miles of voyage and a ton of time and costs along the way. 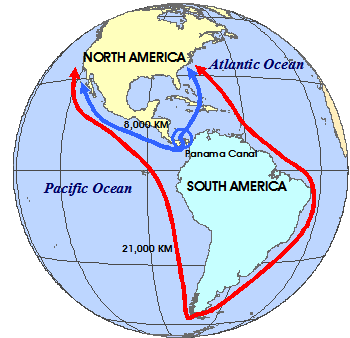 So the French embarked on the project in 1881 only to bail when engineering problems and high worker mortality proved too costly. The US, under the rad Teddy Roosevelt, picked things back up in 1904 and finished it by 1914. The whole project cost $921 million, which is almost $10 billion today, but if you take the portion of the GDP $921 million was at the time, it would be like the US spending $119 billion today.

And everyone knows about the Panama Canal, but most people don’t realize how it works.

When people picture the canal, they sometimes just imagine a full slot of land carved out, leaving a little bar of ocean cutting through Panama. What’s actually happening is that the canal is more like a groove, or a man made river, that runs across the surface of the land, and ships go up over the surface in order to get across. At the highest elevation, ships are 85 feet (26 meters) above sea level.

The Panama Canal system of locks allows ships to ascend and descend in steps, like a staircase, keeping them perfectly level at all times. There are three upward steps and three downward steps. When this system was built in 1914, it was one of the greatest works of engineering in history.

Here’s a map of the canal showing where the locks are, and here’s an animation that shows exactly how the locks work (with the heights exaggerated):