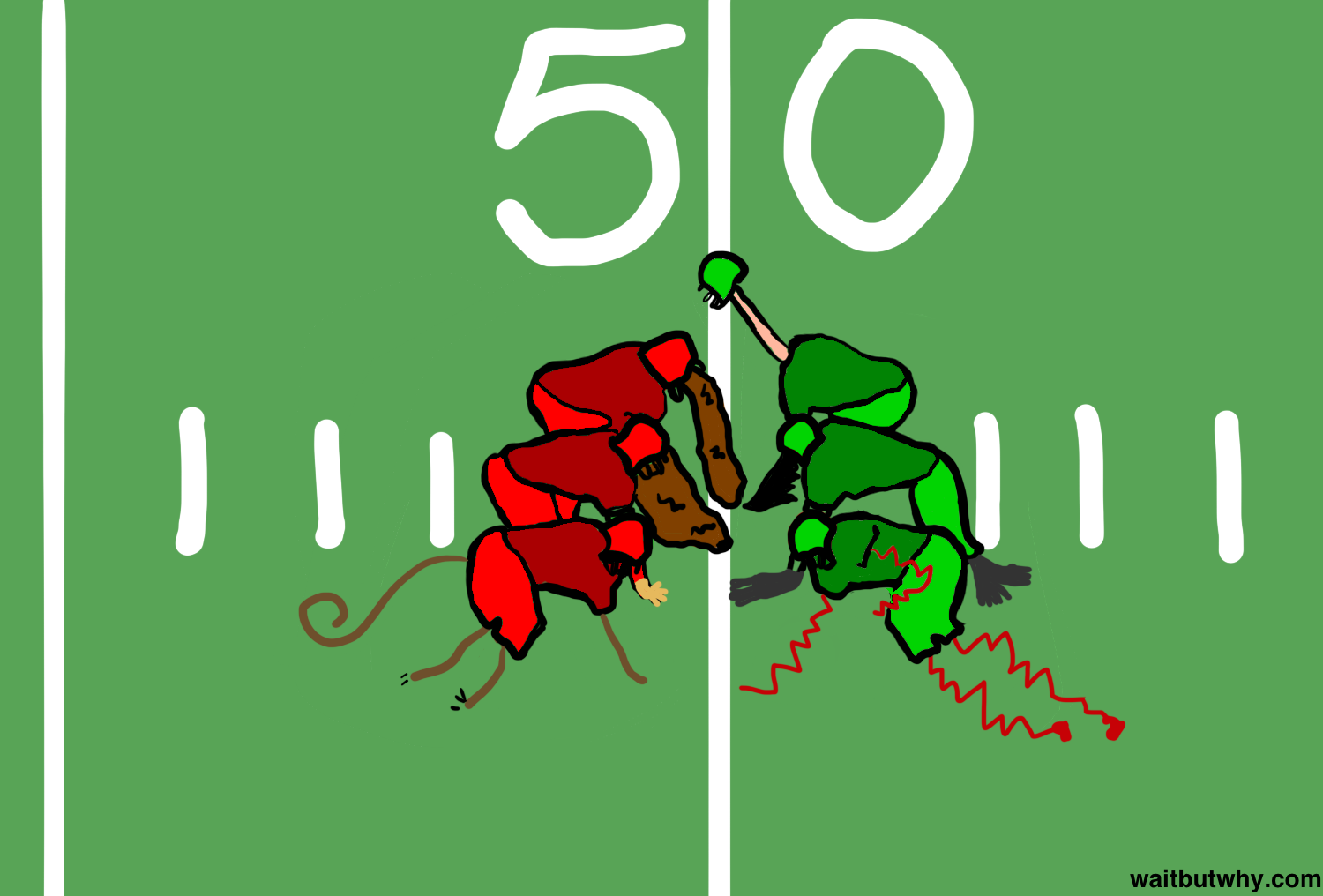 If you’re a regular reader of Wait But Why, one thing you know for sure is that posts will not show up when they’re supposed to. That’s kind of odd, and I’d like to explain a bit of what goes on behind the scenes that makes that happen.

The starting point for the insanity is that WBW is a complete act of love. I didn’t know a “complete act of love” job even existed in the world for me. WBW is exactly what I want to be doing, in the exact way I want to be doing it, and it has gone the exact way I hoped it would go. I couldn’t ask for more in any possible way. That on one hand makes me incredibly happy, grateful, and inspired. On the other hand, it makes me totally nuts—caring about something as much as I care about this is steroids for all of my insane qualities, and it introduces new insane qualities I never even knew I had. Let’s go through them:

The number one culprit is my perfectionism. I’ve always been a severe perfectionist, but WBW brings together a special cocktail of elements that exacerbate this problem to a ridiculous degree. For one, blog posts are one of those terrible matches for a perfectionist, because no matter what you’ve done, they can always be improved. I could spend a year on a post and it would still have room for improvement. Amorphous, subjective, creative projects are utter hell for a perfectionist mind. This quality of mine would have fit beautifully with a linear job like accounting. My perfectionism would have gone ballroom dancing with my accounting work every day forever. Amorphous creative projects—especially when they’re acts of love that you care about—are on the complete opposite side of the spectrum, where my perfectionism is in a constant state of inner resistance, in a constant boxing match with my desire to produce and ship work. Not pleasant.

And it’s exactly when a severe perfectionist is doing an amorphous creative project that he prides himself on, where the pressure’s on, that a little monkey we all know comes out to play. This is where the monkey thrives, because knowing I can’t make a post perfect and also needing to try to make a post perfect is such an unpleasant paradox of a work environment, that an escape is highly desirable.

Wait But Why posts all take over 40 hours to do, many take over 60, and some have taken me over 80 (a huge amount of that time is in research, mulling, and structuring). So traditional Dark Playground procrastinating isn’t as big of a problem as it might be with a smaller project—there simply isn’t the time (or, put more accurately, enough of the scent of panic is in the air 24/7 that it keeps my Dark Playground time at bay). But the IGM is a pro. He’s more of a pro at what he does than anyone is a pro at anything. He sees that he’s not going to be as successful at luring me into the Dark Playground as he would in a more classic, “two weeks to write a college paper I know I can do in eight hours” situation, so he adjusts. “Okay, Tim is oddly determined to be ‘working on his post,’ so let’s figure out which parts of the post he really needs to start working on to be on time and which parts he’d like to have more time on but realistically cannot afford to spend more time doing”—and he discovered research and outlining, bingo and bingo. Monkey wins.

The thing about research is A) it’s the most fun / least hard part of the post-writing process, B) you could always do more, and C) it’s not always clear what you’re even looking for—if you’ve ever been on a Wikipedia or YouTube spiral, you know that research begets more research. One article can quickly turn into five new tabs open on my browser, added to the queue. I often have over 100 research items open in tabs simultaneously. This isn’t dicking around—I’m an expert on nothing, and my job each week is to become a mini-expert on a new topic. I don’t have to know everything, but I have to know a lot more than you. The problem is, where do you draw the line? When are you enough of an expert to stop researching? Monkey wins.

Outlining/planning, on the other hand, is both the hardest and most important part of the process. And it’s the one part where I can sit there determined to make progress, and make none. I can stare at nine documents of notes, research, and brainstorming for 12 straight hours and finish no further ahead in the process than when I started. Perfectionism is in full force here, and the monkey knows it.

It’s in these two phases that more time is spent than should be.

On top of those two usual suspects—Perfectionism and the Monkey—there’s a third, shadowy character fighting with them in the same direction, one who shows his big head in times just like this. He’s the Social Survival Mammoth, and he comes storming into the room in a full wailing frenzy, usually around 4am, when my brain is at 20% caliber, and he shows me mental images of a full Fenway Park and reminds me that there will likely be more than that many people reading this post—the post that’s just not working—and it’s horrifying. Not haha horrifying in a fun way—like really scary. Putting out a bad post to a stadium worth of people is severely embarrassing.

So everything I’ve described up to this point is a one-directional force—the force that makes things take longer. Now comes the equal and opposite force: the Panic Monster.

Since Wait But Why started, the Panic Monster has been my lawful wedded wife, my lover, my boss, and my eternal nightmare.

And let the games begin.

What ends up happening is the three “longer” forces, who are very powerful, are able to overpower the “shorter” forces to an extent—which is why posts are always late—but the “shorter” forces become stronger and stronger each day until the balance tips and they overpower the longer forces, which is why posts are published, ever. Some people have suggested that I just take the “New Post Every Tuesday(ish)” tagline off the site—their logic is obvious: “You never post on Tuesday, and sometimes posts really need more time than a week, so stop embarrassing yourself and just take it down.” But what that would do is it would send both the Panic Monster and the Guilt Ostrich home, leaving only the YRAGLFIYKDT Sea Lion to fight the three heavyweights on the other side. The Sea Lion is powerful, but against all of those three, outmatched. And the result? I’d post about four times a year.

So my apologies for the lack of predictability, and I figured the least I could do is be transparent about what’s happening on my end while the readers who care most are checking the site each week, not knowing what to expect.