A couple months ago, May Tim got inspired.

“You know what would be cool?” May Tim thought to himself, “To send June Tim, July Tim, and August Tim, alone, to a bunch of places where they don’t know anyone and can’t speak to anyone, and they can do a big awesome blog series about it!”

May Tim could hardly contain himself.

There were some obvious questions—what will June, July, and August Tim actually do in these places, what will the blog posts be about, how will those Tims feel about living out of a bag for the whole summer, how will they answer emails and keep up with normal things while frantically trying to keep May Tim’s promises to readers and live up to the hype May Tim created?

Luckily, those questions weren’t May Tim’s problem. “Oh they’ll figure it out,” May Tim mused from his bed as he sipped his morning coffee.

The only question that did need to be addressed was where exactly he was going to send those other Tims. Since the whole thing was mostly inconsequential to him anyway, he decided to let a large group of anonymous Wait But Why readers in on the planning and emailed a poll of possible countries to WBW’s email subscribers. Those readers, not giving much of a shit either, sent the future Tims to Russia, Japan, Nigeria, Iraq, and Greenland. Cause fuck it, why not.

May Tim bought tickets, arranged visas, got some shots, and moved on with his life, wiping his hands clean of the whole thing.

Then a funny thing happened. May Tim disappeared forever, and now I, July Tim, am in the middle of Russia with only these instructions from May Tim: “Okay do a big blog post of some kind about this, but make it good and original, and also go to Siberia cause that’s funny, and also find someone around your age to switch lives with for a day cause I told everyone you were gonna do that, but also figure out exactly why you’re doing that cause I wasn’t sure. Oh and there’s not really a budget so just work that out somehow. K I gotta go now since I have a lot of non-planning of this trip to do, because I’m just not gonna use this valuable month of May to help out with your current situation, cause that’s the kind of guy I am. Good luck!”

So that’s how we ended up with the Odd Trips in Odd Places series, which will take place between now and late August.

In each of the five places, I’ll learn as much as I can about the culture by talking to as many locals as possible and by delving into the strangest corners of society to see what’s happening there. And at some point, I’ll find one person along the way to live the life of for a day, to see what a totally different person’s life is like.

At the end of each leg, I’ll write a big post about everything that happened. I also have a video camera and will incorporate videos and pictures if I can.

Finally, I’m going to ask 50 random people in each country the following question: If you had a magical Aladdin genie who granted you any three wishes, what would you wish for? I’m not totally sure what will come out of it, but I think it’ll be interesting to see how the answers differ from country to country. I’ll write about this part after I’ve done the interviews in all five places.

So that’s the plan. 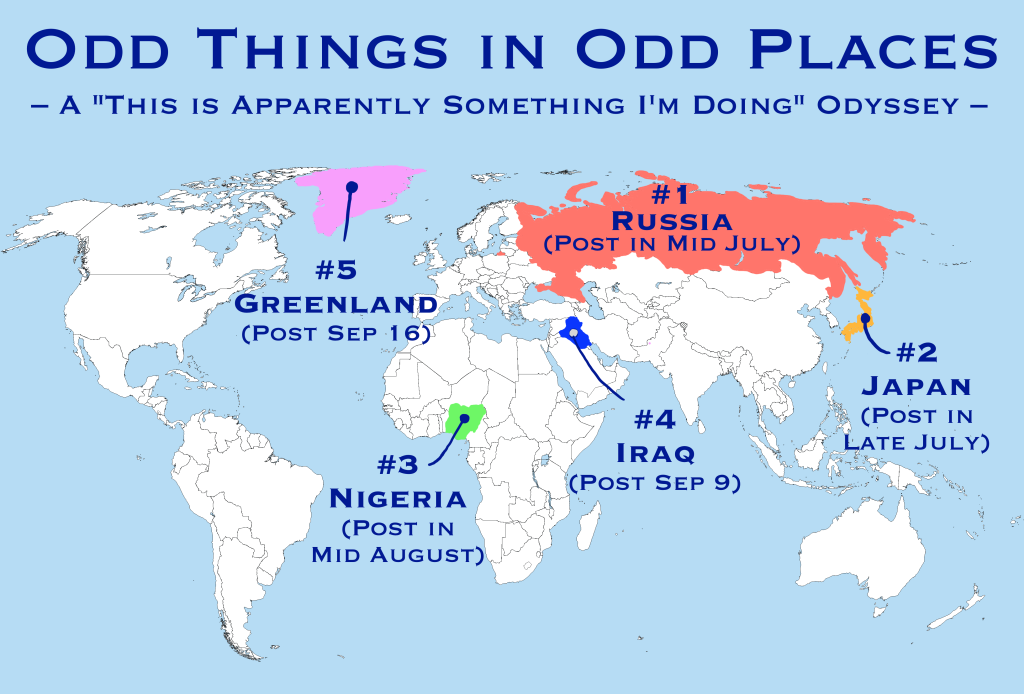 The genie question I asked people in all five countries

And another time, North Korea