In most cities around the world, bars are at the core of the social scene and go hand in hand with youth culture. Which is weird, because this is a diagram that exists: 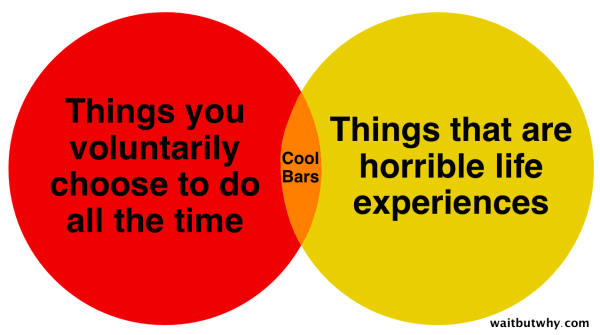 The word “bar” can refer to a variety of places—a handy rule is, the cooler the bar, the more horrible the life experience it will provide. And on a weekend night, the quintessential cool, super-popular, loud, dark city bar becomes a place of genuine hardship.

The problem begins because you have this idea in your head that a cool bar is a fun place to be. You think to yourself, “It’s time for a big weekend. Excited to hit the bars!” without what should be the follow-up thought, “Oh wait no, I remember now that weekend bars are terrible places to go to.”

After years of accidental suffering by billions of people, it’s about time we took a long, hard look at this voluntary practice and examine just what a night out at a popular bar entails.

Let’s start at the beginning:

As you arrive, you come up to a familiar scene—

If you want to understand how a cool bar thinks, just take the way every other business thinks—”please the customer and they’ll come back”—and do the opposite.

While you wait, you’ll watch several all-girl groups walk to the front of the line without waiting, where the bouncer opens the rope and lets them in. Ahead of you. Because you’re a little bitch.

When you finally get to the front, you’ll notice there’s no sign with the bar’s name anywhere, because the bar likes to watch its little bitch customers go through extra trouble to find them.

He then shuffles your little bitch ass along to the next stage, where they show everyone how desperately you want to be their customer by charging you $10 just to come in. They cap things off by stamping their logo on your undignified hand, just because they can.

An uninformed observer would only assume, after seeing everything you just went through, that the place you were about to enter would be some coveted utopia of pleasures. They’d be pretty surprised to see you walk into this: 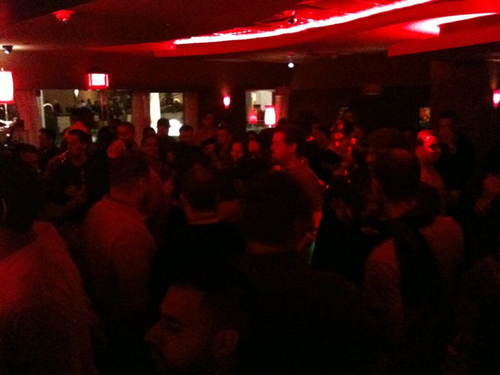 The first moment you walk into a scene like this brings a distinct mix of dread and hopelessness. It’s an unbearably loud, dark, crowded cauldron of hell, and nothing fun can possibly occur here.

I’m not sure when it happened or why it happened, but at some point along the line we decided that the heinous combination of Loud/Dark/Crowded was the optimal nightlife atmosphere.1 Maybe it started because clubs were trying to imitate the vibe at concerts, and then bars started imitating clubs to seem hipper—I’m not sure. But where it’s all left us is a place that disregards the concept of a human, and there you are in the middle of it.

Anyway, now that you’re in—what’s next? Let’s take a look at the various activities you’ll take part in during your time at the bar:

Activity 1) Getting a Drink

After wedging your coat into a nook in the wall and saying goodbye to it for the last time, it’s time to go get your first drink. You were the first one of your friends to walk in the door, so you’re in the lead as your group works its way through the crowd, which means you’re the one who’s gonna drop the worst $54 a human can spend on a round of drinks no one will remember. But that’s the end goal—first, you need to figure out how to get through the three layers of people also trying to order drinks: 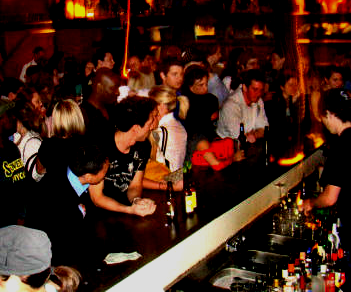 It’s a sickening undertaking. And depending on your level of aggressiveness and luck, making the worst purchase of your life could take anywhere from 3 to 20 stressful minutes. I’ve spent at least a cumulative week protruding my face forward, vigorously locking my eyes on the bartender’s face and still not being able to make eye contact.

You finally get back to your friends with drinks, just in time to start the primary bar activity—

Activity 2) Standing there talking to no one

Standing there talking to no one is a centerpiece of any night at the bar. If you don’t look carefully, Loud/Dark/Crowded will give you the impression that everyone in the bar is having fun and being social. But next time you’re at one, take a good look around the room, and you’ll see a surprising percentage of the people looking like this guy: 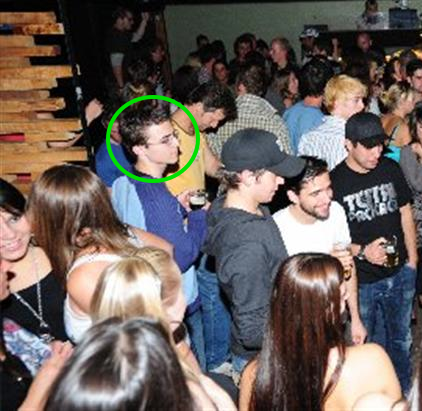 Just 30 minutes earlier, this guy was at dinner with his friends—talking, laughing, and sitting comfortably. Now, luckily, the real fun has begun.

Almost as ubiquitous as Activity 2, holding something—usually a cold drink—is popular in bars around the world. The thing we all ignore is that holding a cold drink is shitty. A) Holding anything up for an extended period of time is shitty, B) A cold, wet drink is especially unpleasant to hold, and C) because bars are insanely crowded and people are constantly moving, your elbow will be bumped about once every 30 seconds, continuously spilling the drink on your hand and wrist. If you were in a restaurant and someone told you you had to hold your drink a few inches off the table while you sat there, you’d leave.

Unfortunately, putting it down isn’t really an option, because holding nothing at a bar frees up your hands, which has the side-effect of making you suddenly aware that you’re just standing there talking to no one, and you might panic. The solution is to quickly hold something else, usually your phone, which whisks you back into hiding.

Desperate to maintain the “This is fun!” narrative we’ve all been sworn to, you’ll sometimes hear a person yell out to no one in particular. They won’t yell an actual word—just something unendearing like “Woooh!” or “Ohhhh!” Relative to other activities, this is one of the most fun moments you’ll have in the bar.

At some point you’ll decide to try to interact with your friends, since you’re in theory having a night out together. There’s no chance of presenting information in a nuanced way, so the conversation stays crude and basic—I’d estimate that 20 minutes of bar conversation accomplishes what roughly 1 minute of restaurant conversation does.

You might even get ambitious and decide to start accosting strangers. This tends to be an upsetting experience for both sides of the interaction, and almost never leads to anything fruitful. The irony of all this is that the Loud/Dark/Crowded cauldron of hell vibe is there in the first place for single people who want to meet single people, and bars don’t even do a good job with their prime purpose. Bars are a terrible place to meet someone if you’re single. You can barely see what people look like, let alone any subtle facial expressions that convey personality. And because it’s so crowded and hard to hear anything, mingling doesn’t really happen, which leaves aggressive conversation-starting (i.e. accosting strangers) as the only real way to get things off the ground.

Once you’re in a conversation with someone new, you’ll spend 6 minutes getting through the first nine lines of small talk and still have no idea if the stranger has a sense of humor—not a good environment to build chemistry.

A lot of people cry in bars.

From girls skipping the line or the cover charge to guys buying drinks for girls they met eight seconds ago, bars provide a modern arena for decades-old gender stereotypes, casual discrimination, and whimsical misogyny to flourish and thrive. Sexism and gender inequality are hot topics right now, and yet everyone seems fine reverting to 1953 when they enter a bar. 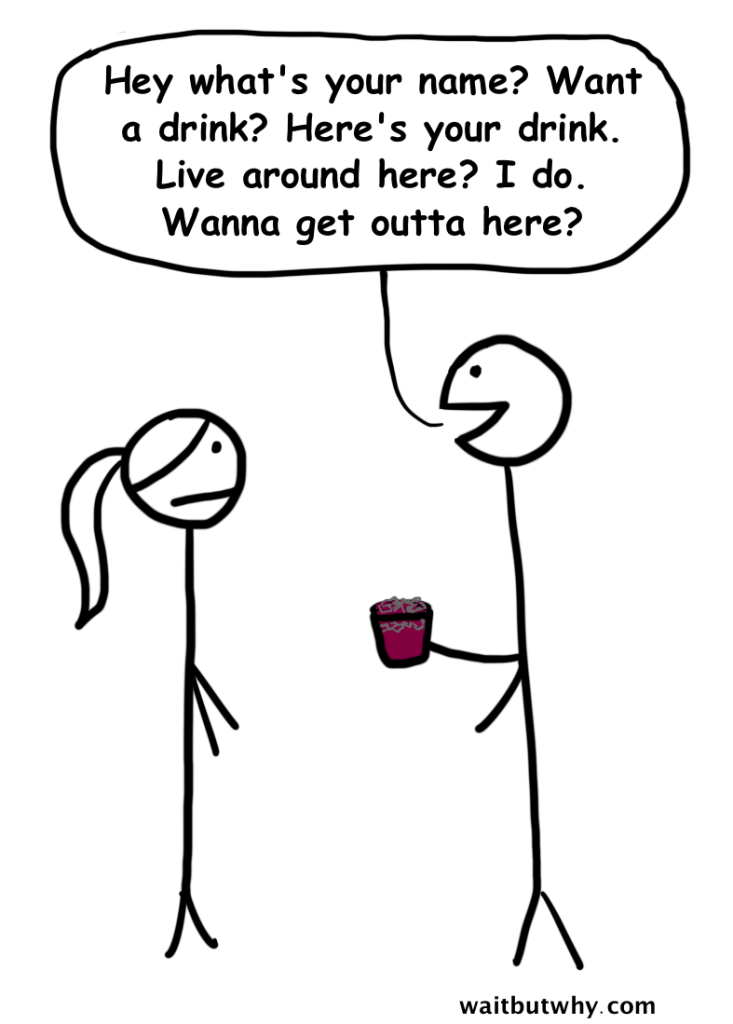 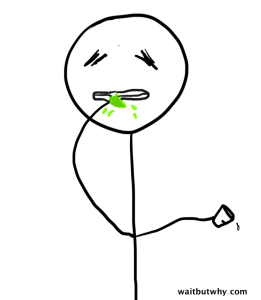 Shots don’t taste good. And anyone who says otherwise is lying.

Bars are a great place to really soak up the collective sludge of humanity. From the sticky floors to the vomit to the strangers making out to everyone breathing on everyone else to the bartender handling money and then shoving a lime into your drink, it’s a quality of living only drunk people could create and only drunk people could endure. The most disgusting exhibit is the men’s bathroom, where 120 drunk men have each sloppily peed 1/4th on the floor—which makes it a similar place to a bathroom where 30 men have peed only on the floor, and a place you’ll have to visit at least twice.

As this cesspool of bad human qualities rounds itself out with a fistfight between two fragile-egoed drunk dudes venting their sexual frustration onto each other, it’s time to wrap things up.

Suddenly remembering that food exists, you’re reenergized and work your way to the exit through the closing-time crowd of ultra-horny guys making furious last-second attempts at meeting someone. You’re pleasantly surprised to actually find your coat and then you head out the door, making sure to forget your credit card behind the bar.

There’s one more critical step—the moment that propagates the bar species onto the next night: You need to convince yourself that the night was super fun.

Of course, loud, dark, crowded bars are not fun. But drunk usually is fun—no matter where it is. Go to the grocery store drunk with a bunch of friends, and you’ll have fun. Go ride the bus around town—if you’re drunk, you’ll probably have fun. If you had a good time at the bar, what actually happened is you were drunk and the bar was not quite able to ruin it for you. If something is truly fun, it should still be at least a little fun sober, and bars are not even a little fun sober.

Some people aren’t even conscious of the fact that they hate these bars and for them, the self-convincing is an automated process that takes place all through the night. For others, the delusion is a bit more forced and takes a week or two to take hold. A few people won’t ever twist the memory, but enough of their friends will that they’ll need bars for another purpose—avoiding FOMO—and they’ll be back before long.

We have a problem here, with no foreseeable solution—and until something changes, the weekend streets will be lined with little bitches, patiently waiting.