Email is one of those things that’s just a part of your life, period. Most of us know someone who has closed their Facebook account or refused to join in the first place in a little foot-stomping stand by their ego, and you might even know someone who is thrilled with themselves for not owning a smartphone.

But within the adult internet-using world, no one is allowed to not have email.

Not having email today would be the equivalent of not having a phone number—you’d have to be really doing your own thing to go there.

And so here we all are, typing things into compose windows, battling down our inboxes, and it’s going pretty well—but like any world of social interaction, email has its difficulties.

1) Exchanges that have an unequal power dynamic. 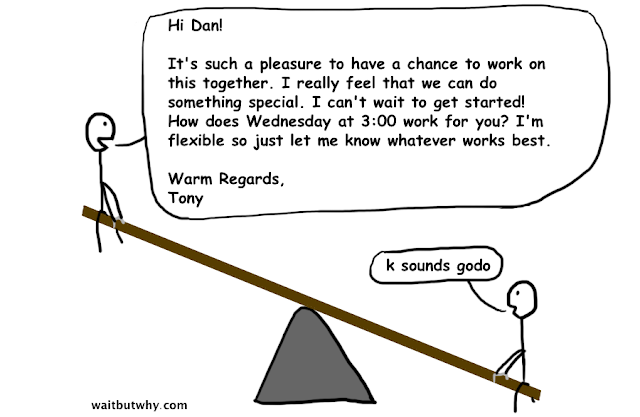 If someone you’re emailing with:

Then you’re their bitch.

Unequal email power dynamics can happen for many reasons—a professional ladder discrepancy, an age discrepancy, a “customer’s always right” situation, a thing where many people are all emailing one person—but usually, it’s that the person writing the high-quality email wants/needs something from the person writing the low-quality email. Simple as that.

Not all Baby Boomers—you know who I’m talking about.

They’re the last remaining people with AOL email addresses. They scan a hard copy of an article and email it as an attachment instead of emailing a link to the article. They write the word e-mail with a hyphen in it. And they don’t know that “replying to all” is a thing that can happen in the world: 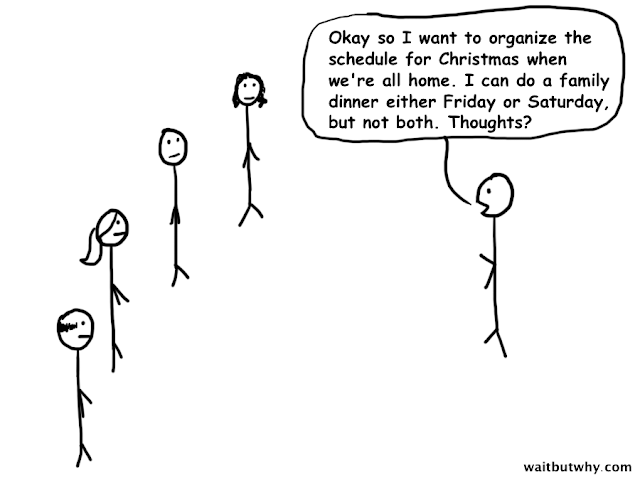 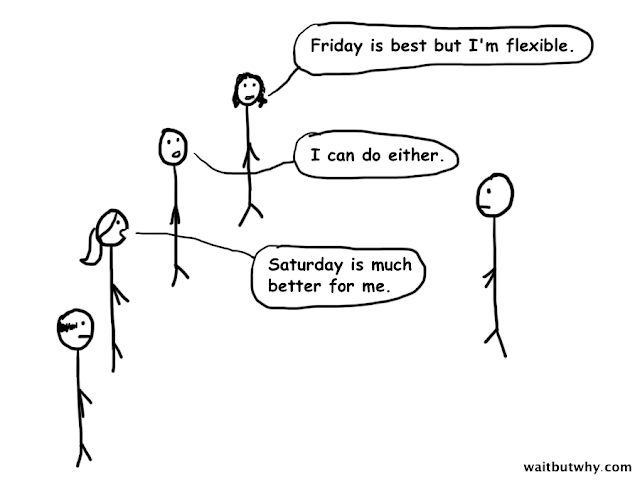 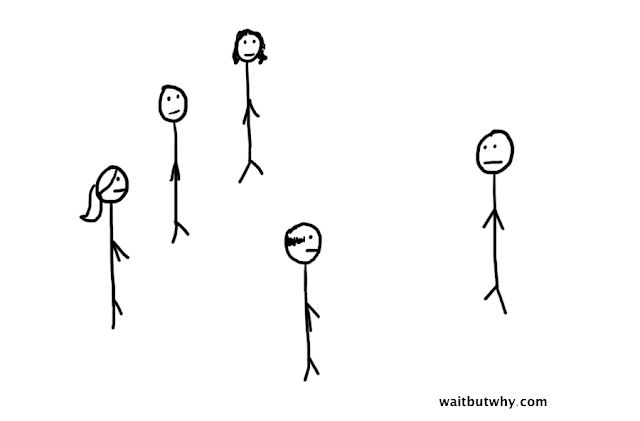 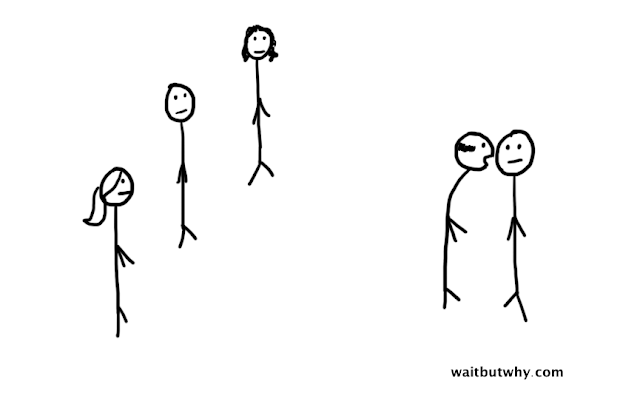 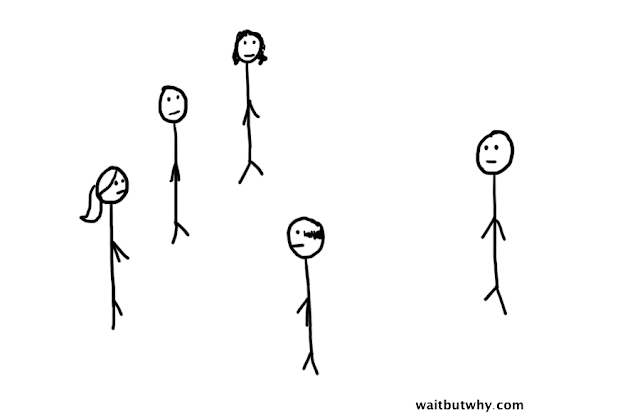 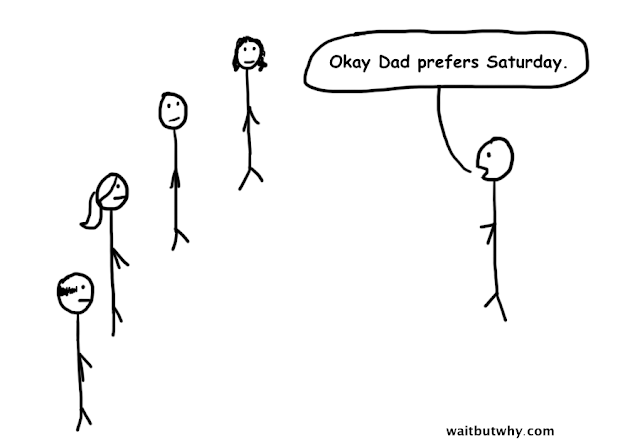 Sometimes, you’ll come across the especially un-tech savvy Baby Boomer who inexplicably writes their emails in all caps. 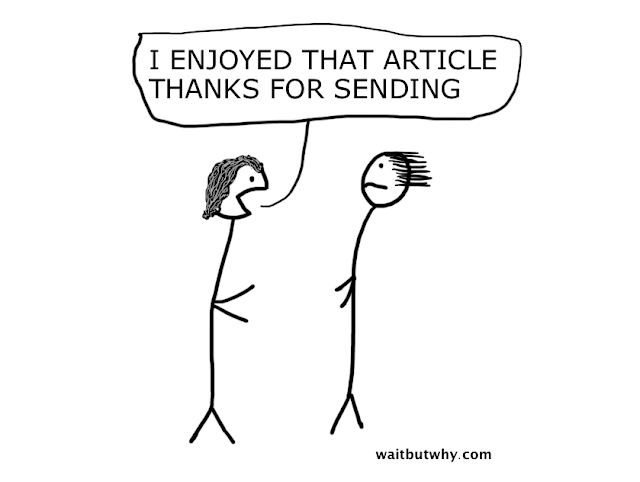 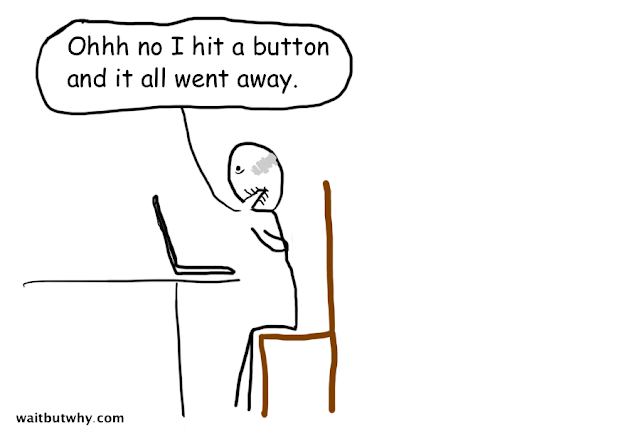 To my grandmother, who tells me that her “machine is broken” when the browser window has accidentally been minimized, words like “forward” and “attachment” and “link” don’t have simple, concrete definitions—they’re just vague, complex ideas that she’s heard of but doesn’t understand.

She feels about email the way I feel about this sentence:

Central banks in developing countries are tightening policy and intervening in currency markets in response to concerns about the potential effect of currency depreciation on inflation, though gross issuance of nonfinancial corporate bonds and commercial paper have slowed and interest volatility has substantially diminished, possibly suggesting that reaching-for-yield behavior might be increasing again.

If you weren’t far too lazy to write a letter, it would be a good idea to stick to hand-written correspondence with people born in the 1920s, especially since there’s the side benefit that a letter from someone born in the 1920s will be a cool thing to own in 50 years. 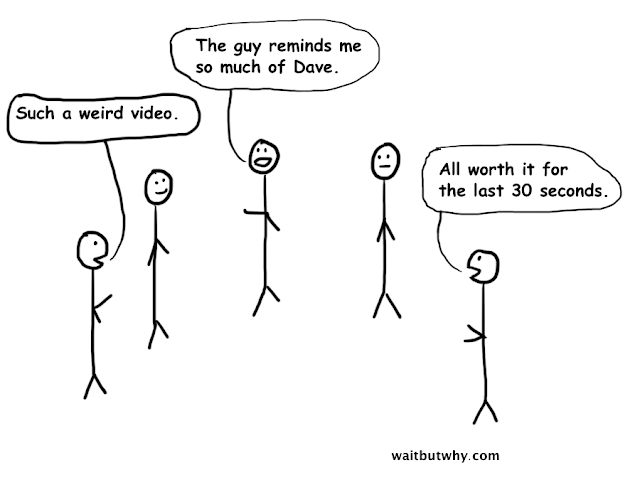 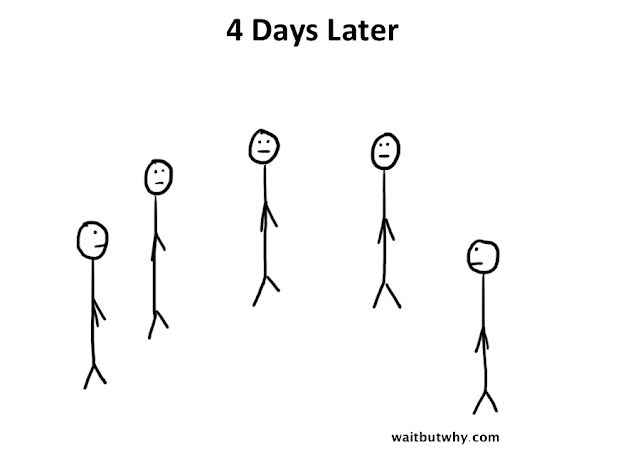 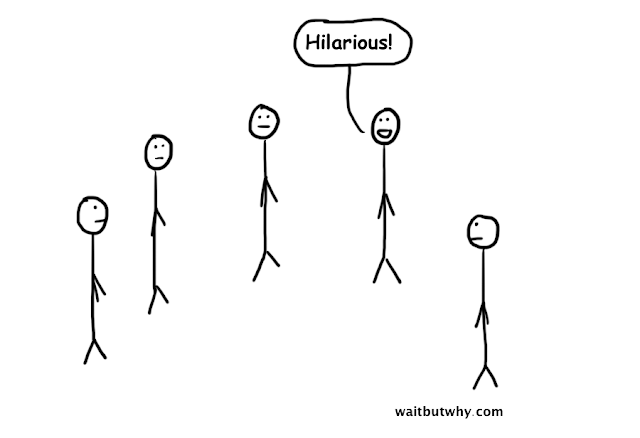 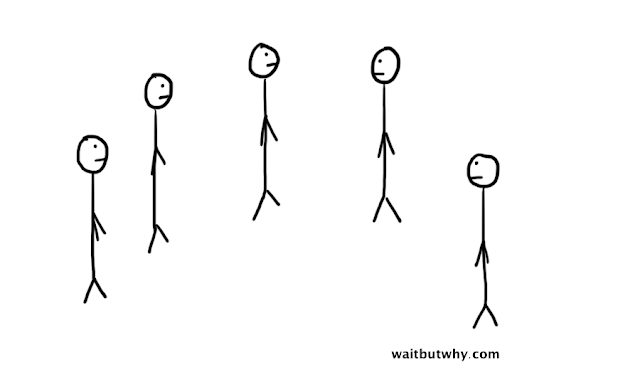 5) Figuring out how to address a minor friend in an email greeting.

To make things easy, we at some point all agreed upon certain rules and regulations for how to address various categories of people that we email. 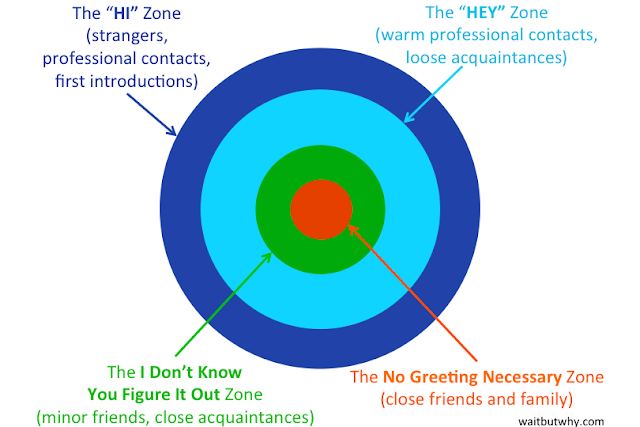 “Hi ____” is friendly in a distant, neutral, professional way for everyone you don’t know well. When your relationship with someone takes a step forward, it graduates to the warmer, more casual Hey Zone. And with really close people, you can just skip the greeting altogether—no one starts an email with “Hey Mom”.

But how about that green zone category of people who are more than acquaintances—so greeting them with “Hey” would seem too formal and distant—but you don’t talk to them enough to just out of the blue email them and start talking without a greeting? How the hell are you supposed to start an email to that friend from college you talk to every two years or that old work colleague you became friends with and then fell mostly out of touch with?

It’s not easy. And unlike all the other greetings, this one requires creativity. Some possibilities:

– Hey John! — The exclamation point says, “This isn’t a normal Hey greeting—I’m smiling and extra excited because we’re pretty close, and our relationship is a positive thing in my life.”

– Johnny! — A typical response greeting to the “Hey John!” email. It’s acknowledging that you’re on nickname terms, and also joining the celebration of your friendship with the exclamation point.

– Hey man — This is something guy acquaintances or minor friends do to deal with being in the green zone. It’s the greeting version of a friendly back slap.

– Sammmm — A girl tool to deal with the green zone.

– Heyyy — The extra Y’s say, “Just swinging by to say something, and we’re friends so sometimes we just swing by. 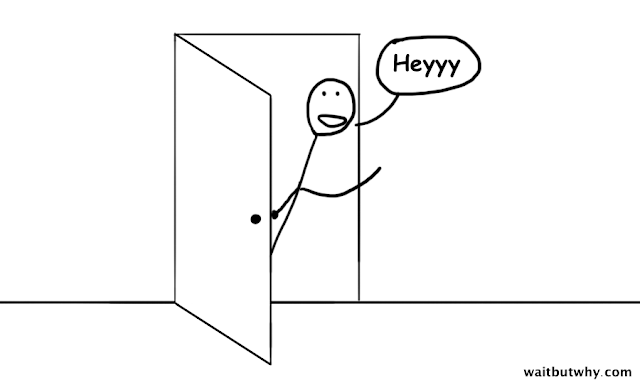 5b) Figuring out how to sign-off in an email to a minor friend.

Similar situation. For the distant people, we have all sorts of autofills—Best, Regards, Talk soon, Take care, Thanks, etc.—and the really close people need no sign-off at all. But for minor friends, we’ve got another whole song and dance on our hands.

I’ll sometimes finish a minor friend email with something like, “Thanks,” and then look at it and think, “Ugh it’s too formal.” I then sigh, put the cursor at the end of the word, and begrudgingly type in two more S’s.

It’s also worth noting that some people have decided that xoxo is an appropriate sign off because they’re just that adorable, and others just decided to start signing off with only the first letter of their name, because apparently we’re now dating. To me, both sign-offs make me think the person looks like this when they’re typing it: 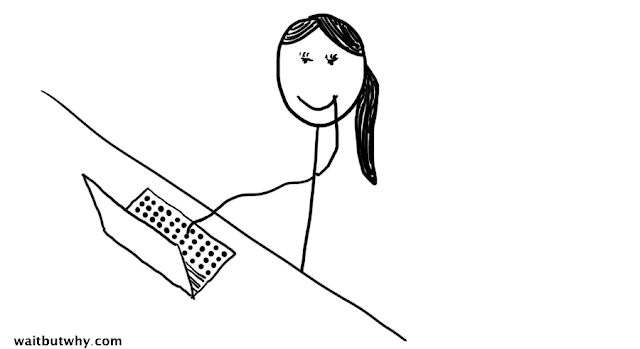 6) Saying Robot Phrases, which reminds you that you’re not actually that unique a person.

A Robot Phrase is a commonly used email phrase that you end up using just because everyone else is using it and you’re not that creative a person. 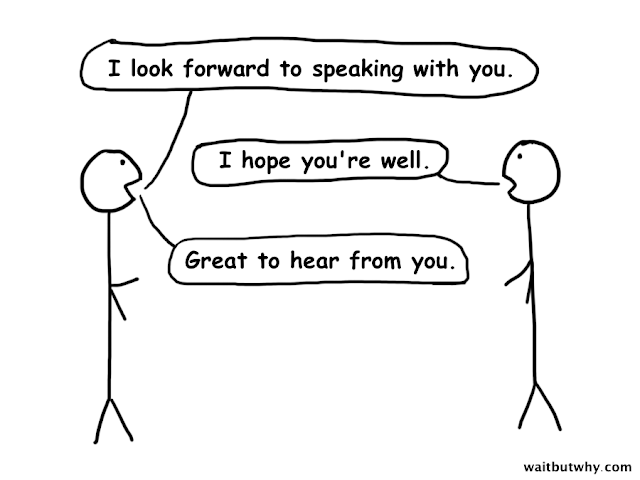 These cookie-cutter Robot Phrases remind me of my voicemail recording being “Hi, you’ve reached Tim. Please leave a message.” The next thing that comes on is an actual robot that says “At the tone, please record your message yada yada,” and she and I are doing an equal job of expressing our individuality—but unfortunately, the only other option is to be an unnecessary weirdo by doing something surprising.

Email Robot Phrases are not quite as socially required as Voicemail Robot Recordings, but most of us are too lazy to deal with thinking up alternatives. Every single time I type one, though, I feel a slight twinge of self-loathing for being such a societal cog.

With in-person interaction, we have a million subtle ways to express tone. Even on the phone, without the use of facial expressions or mannerisms, tone of voice gets the job done sufficiently.

But over email, we’re stuck with a crude set of symbols as our tools to express nuance, making punctuation a critical part of the email world. A few guidelines:

Some people don’t use exclamation points, and with those people, it’s safe to stick with periods. 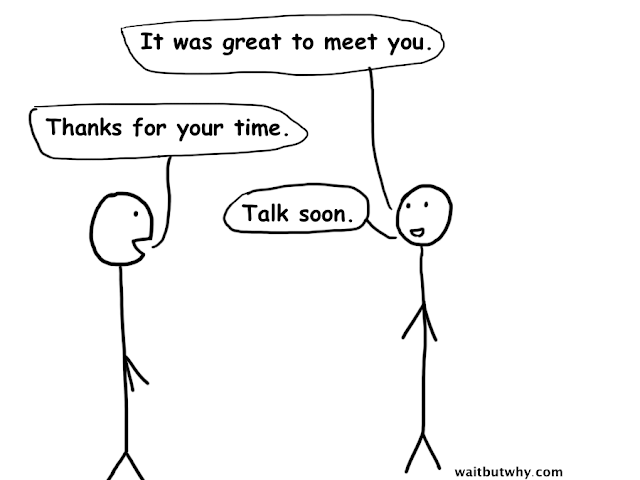 Others use them constantly, and with those people you’re a huge dick if you don’t, so you’re forced to join the party. 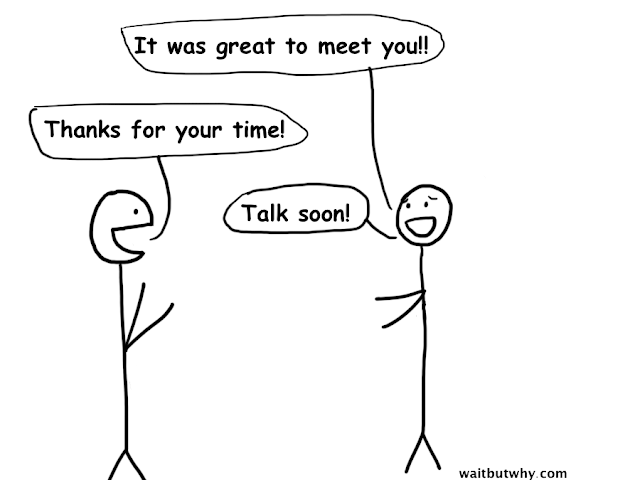 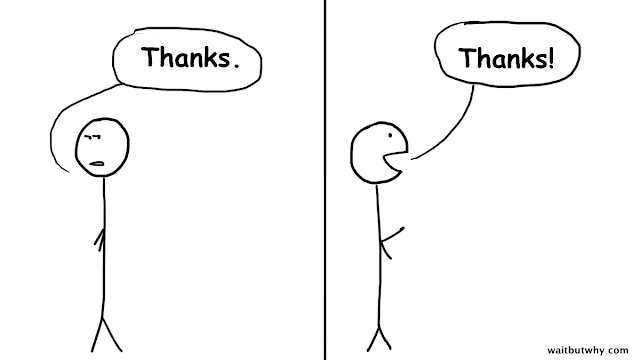 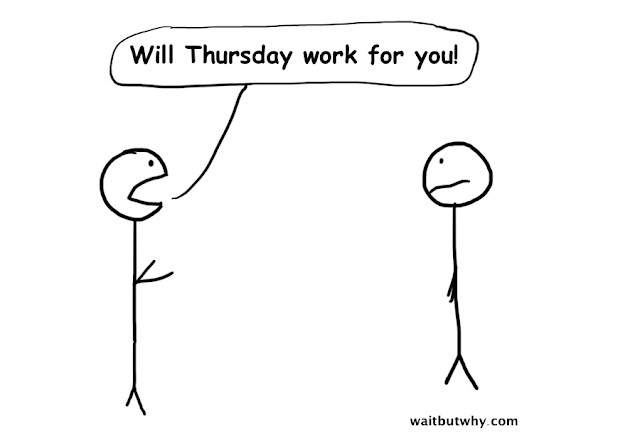 I can go either way with exclamation points and tend to just follow the other person’s lead, but I find that this is a pretty strong correlation: 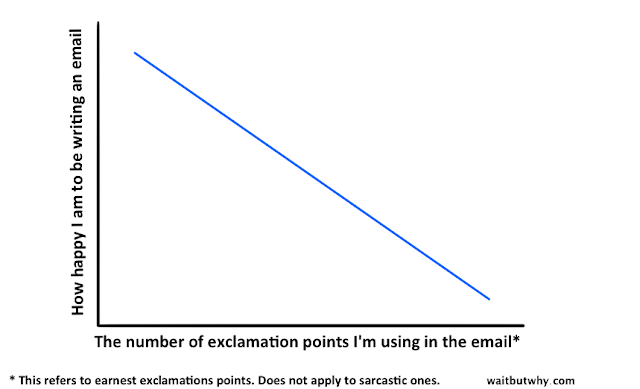 8) The epic correspondence that neither involved party wants to be a part of. 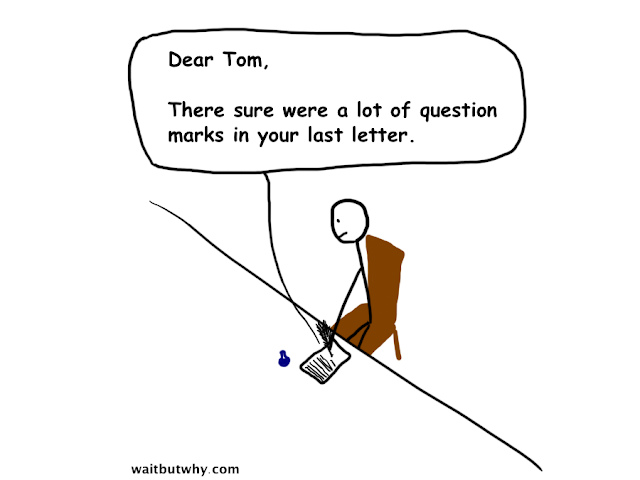 This is a very odd phenomenon unique to email. It happens when two not-that-good friends find themselves stuck in the mutually-obligated chore of writing long descriptions of their lives to each other every few months. Both parties dread having to answer all the last email’s questions and write a lengthy life description, and each is pretty bored by the process of reading the other’s.

This cycle either goes on until one of the people dies, or sometimes, someone finally gathers the guts to just not respond to the other’s email and then both parties can sigh a deep breath of relief.

9) Trying to shove the concept of laughter into the email medium.

Laughter is a delightful part of vocal correspondence, so we’ve decided we need to figure out a way to express the same thing over email—but it’s awkward.

Absurd people who say lol aside, here’s what we’re dealing with:

hahaha — I found this a little funny

hahahaha — I found this reasonably funny

HA or HAHA or HAHAHAHA — I found this very funny

At least in my world, I find that when something is actually funny, it’ll result in capital letters.

And in almost all of these cases, the recipient pictures the sender actually laughing as they type, when in fact they probably look like the guy in the picture above.

10) The fact that hurtful things are happening to you and you’re not thinking about it. 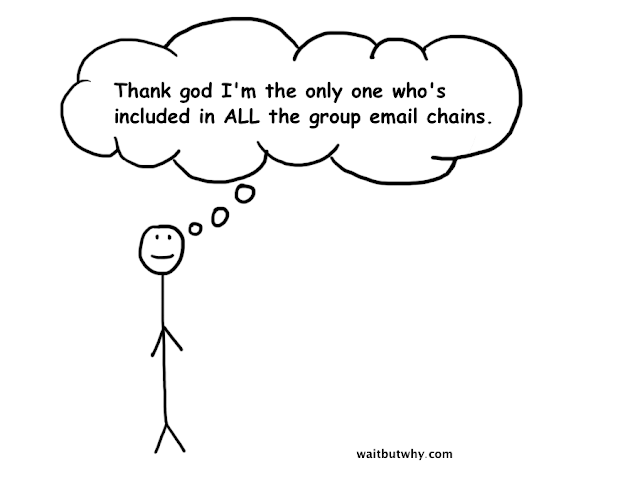 Being humored by fake haha’s is just the beginning.

You know how people sometimes BCC someone on an email they’re writing to secretly loop them in? You know what you don’t consider? The times when you’ve received an email from someone and there’s a BCC happening unbeknownst to you—when you’re the chump being spied on. Kind of upsetting right?

How about the fact that you’re part of a number of group email chains, some one-time things and some that are recurring—and you kind of just assume that those are the only group chains happening. When in fact, there are a number of group chains between various friends or family members of yours that you are not included on, whose existence you never really consider.

Worse, think about a time you’ve forwarded an email you received to someone else for mocking purposes. Kind of mean, but you’ve also kind of done it right? How shitty is it that at some point, you’ve been the subject of the secret mocking forward? 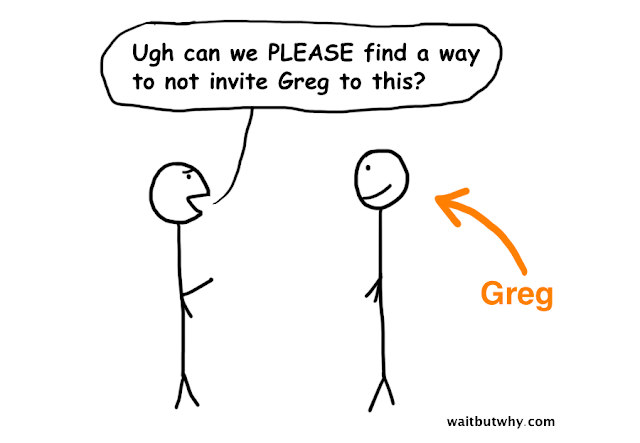 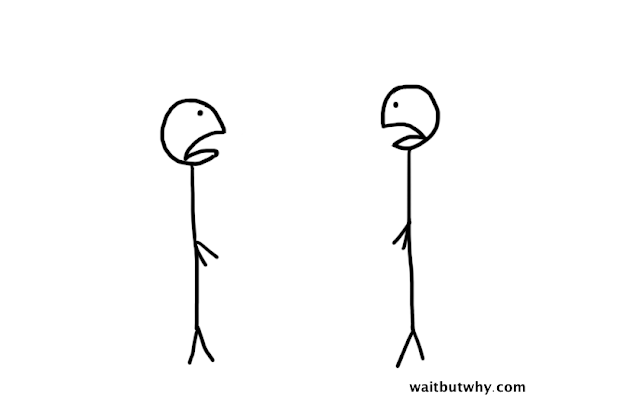 The email disaster is a special kind of disaster. It can be mortifying, hurtful, or even friendship-damaging.

– Emailing Person X to say something bad about Person Y and accidentally emailing it to Person Y instead.

– Replying just to Person X on a group chain to say something private and accidentally replying to all.

– Forwarding an email to someone and forgetting that below the email is a whole correspondence chain that has something sensitive in it, maybe even about the person you just forwarded it to.

– Sending an attachment to someone and accidentally attaching the wrong horrifying thing.

More examples of life being awkward:

The Great Perils of Social Interaction

Why You Secretly Hate Cool Bars

And this is what happens when someone takes too long to respond to an email I write them.