I’d like to introduce you to a game I’ve been playing with friends for years. It’s not a game really—more of an exercise. The purpose is to add a bit more depth to the question, “Are you a good person?” Here’s how it’s played: Treat a person like an apple, with three layers of depth— 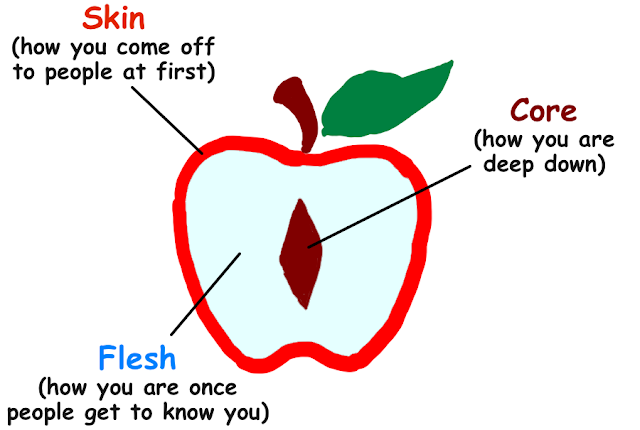 The idea is to label a person simply as either “good” or “bad” on each of these layers to create an “apple profile”—a quick sizing up of their goodness through and through. More about the three layers:

Definition: How you come off at first

Who Knows Your Skin: Everyone who comes into contact with you, from a cashier you buy something from (that’s the outermost surface) to a coworker you’ve never really gotten to know (further inwards but still considered the skin).

Questions to Ask to Know Whether Your Skin Is Good or Bad:

– Do people tend to like you and feel comfortable around you when they first meet you?
– Do people who barely know you think you’re a nice person?
– Would people describe you as “friendly”?
– Are you pleasant in public?
– Are you almost always nice to waiters, cab drivers, and cashiers?

Definition: How you are once people get to know you

Who Knows Your Flesh: Friends, family, significant others, and other people in your life who have gotten to know you pretty well.

Questions to Ask to Know Whether Your Flesh Is Good or Bad:

– Do you often talk about people behind their back very differently than you’d talk about them to their face?
– If someone says something bad about someone you care about when the person is not there, do you often stay quiet (as opposed to vocally standing up for the person)?
– Would people who know you well say you can be pretty petty sometimes?
– Would people who know you well say you can be pretty judgmental sometimes?
– Do you often feel schadenfreude when something goes badly for someone you know?
– When you’re at a one-on-one dinner with someone you know well, would you feel comfortable talking about yourself for much more than 50% of the time?
– Are you less-than-great at keeping secrets?
– Do you sometimes exaggerate or lie about facts when you recount stories from your life?
– Are you bad at returning things you borrow or paying people back quickly?

Definition: How you are deep down

Who Knows Your Core: For some people, their closest friends, family, or significant other. For others, only the person himself knows what his own core is like.

Questions to Ask to Know Whether Your Core Is Good or Bad:

– Picture a button that, if pressed, would make 1,000 strangers across the planet drop dead instantly and also make a career dream of yours come true or lead you to true love. No one would ever know that you pressed the button if you do. You’re given exactly one hour in front of the button to think about the decision. At the end of the hour, would you press it?
– Are you ever cruel just because it feels good to be?
– Are you meanest to the weakest people you know?
– Do you rarely feel any real empathy for those you care about in their times of misfortune?
– Do you typically make your friends and family members feel worse about themselves when you spend time with them?
– Would the people closest to you agree with the statement about you, “Deep down, she really only cares about herself.” Would you agree with that statement about yourself?

Here’s a breakdown of the range of depth various people in your life probably know you:

The ranges aren’t just because various people in the same categories know you to various levels of depth, but because some people are more open and “let people in” more than others. So Tommy’s “pretty good friends” might know him better than Jenny’s closest friends know her, because Tommy is more open with friends than Jenny is.

Anyway, the end result here is eight possible apple profiles. To come up with your or someone else’s apple profile, you simply need to label them with either good or bad for all three layers and say them in order (skin, then flesh, then core). So someone who has a good skin, bad flesh, and good core would be a GOOD-BAD-GOOD.

Let’s discuss each of the profiles:

Their Deal: Saints through and through; everyone else other than BAD-GOOD-GOODs makes them a bit uncomfortable; they totally underestimate how bad bad people actually are.

Why They’re Great: The world needs some people like this to hold everything together; they’re intensely trustworthy.

Why They’re Shitty: They have potential to suck the fun out of the room; they disapprove of a lot of things.

Their Deal: They turn new people off only to be revealed as positively wonderful when you get to know them. GOOD-GOOD-GOODs like to make a token BAD-GOOD-GOOD friend to keep people on their toes.

Why They’re Great: They’re utterly solid; they detest both phoniness and pettiness; people tend to respect them; they make great leaders.

Why They’re Shitty: Their ego might be slightly too thrilled with its little “standoffish yet wonderful” thing.

Their Deal: Their friends chuckle when new people talk about how nice they are; they tend to be friends with a lot of other GOOD-BAD-GOODs; they often feel like they’re worse people than they actually are.

Why They’re Shitty: They can be both phony and petty, but nothing too dire.

Their Deal: They intimidate a lot of people and turn off others, but their friends think they’re the best and fiercely defend them. Most of their friends are other BAD-BAD-GOODS with some GOOD-BAD-GOODS and some BAD-BAD-BADs sprinkled in.

Why They’re Great: They’re kind of a dick but at least they’re a kind-hearted dick.

Why They’re Shitty: They’re kind of a dick.

Why They’re Great: As far as Bad Core people go, they’re at least making the world a better place a lot of the time; strong profile for political success.

Why They’re Shitty: The people they do harm are the ones closest to them; they’re highly manipulative.

Their Deal: This is a weird and rare profile, and usually happens when a not-so-great person is carefully crafting their persona; they’re often delusional, thinking of themselves as a BAD-GOOD-GOOD (“People think I’m a dick but people who know me know I’m a great person”) and denying all ties to their bad core; they break a lot of hearts.

Why They’re Great: Good profile for success in a cutthroat industry (their bad skin can provide the proper intimidation, their good flesh can build a large trusting network, and their bad core can focus singlehandedly on personal advancement at all costs and fuck people over when necessary).

Their Deal: Everyone’s fun friend who turns out to also just kind of be a huge asshole. Lots of falling outs with GOOD-BAD-GOOD friends after hitting it off beautifully.

Why They’re Great: Amazing as a Real Housewives cast member.

Why They’re Shitty: Biggest phonies of the bunch.

Their Deal: Just a good old fashion bad person. Sometimes friends will try to spin the narrative that their BAD-BAD-BAD friend is really a BAD-BAD-GOOD, but no one really believes it. They don’t really understand people with Good Cores but detest both GOOD-GOOD-BADs and BAD-GOOD-BADs for both thinking and trying to project to the world that they’re better than BAD-BAD-BADs—BBBs see right through it.

Why They’re Shitty: Do you really have to ask why they’re shitty?

So…which one are you? How about your friends and family members?