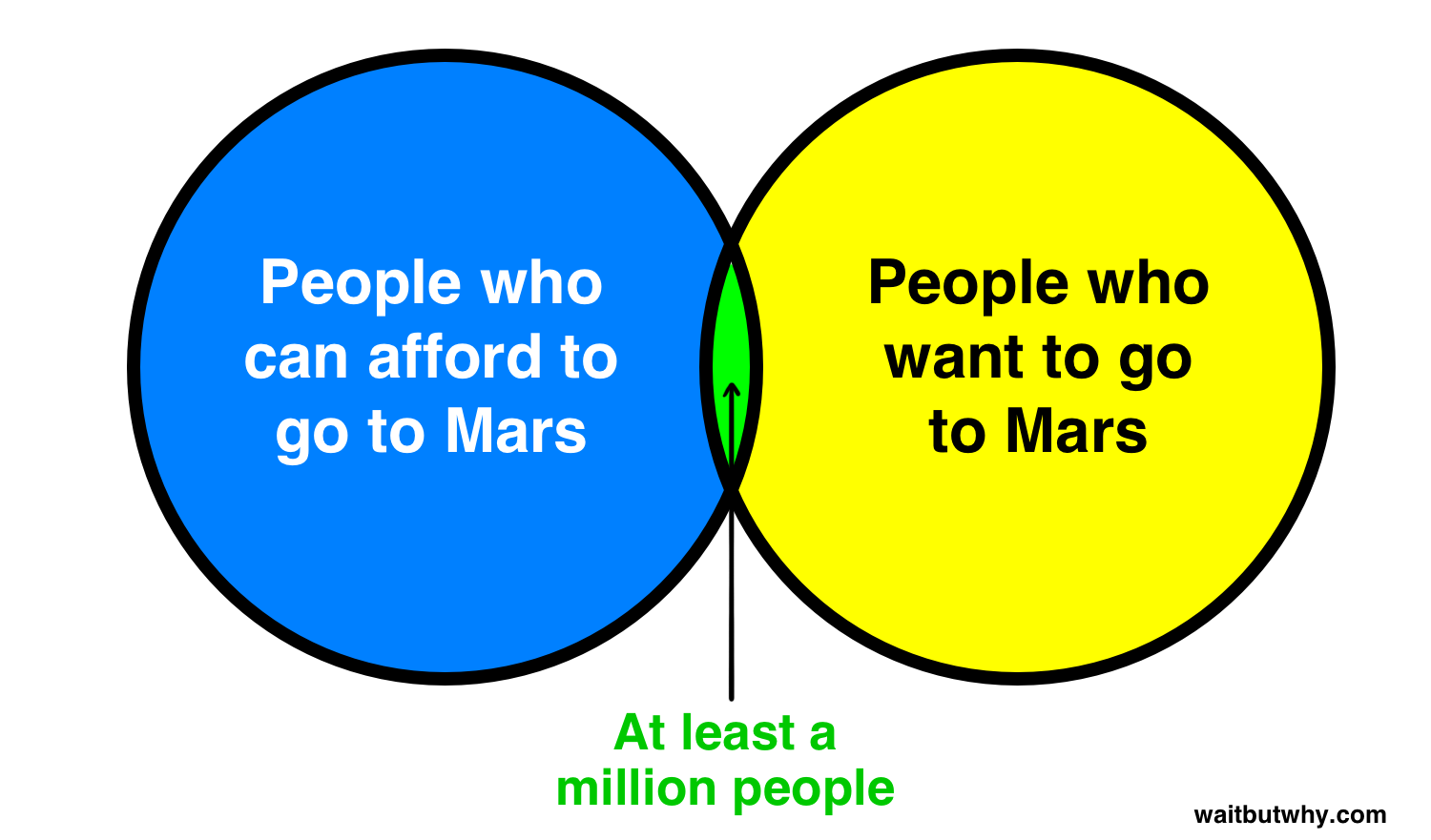 That was my visual depiction of Elon Musk’s quote about what it will take to colonize Mars and make humanity a sustainable multi-planetary civilization:

After I finished the post, Elon asked me if I’d like to help to host SpaceX’s next launch webcast, commenting, “I’m open to ideas. Whatever will increase the ‘wants to go’ circle in the Venn diagram.”

I responded, “That’s definitely not something I have time to take on right now, and also I don’t know how to do that, and also yes duh.” Except I didn’t say the first two parts, and instead of “yes duh” I said, “Sure, I’d love to help in any way I can.”

Then I forgot about this and resumed living my life.

Flash to this week. SpaceX is finally ready for their first launch in six months and the first one since the June failure, and here I am in LA. Launch is at 8:33 EST on Monday, 12/21. That’s tonight.

The launch will be simulcast live on Wait But Why, starting a little after 8:00pm.

The purpose of the launch is to bring 11 satellites to space and place them in orbit for a private company called Orbcomm. But there are three other much more interesting storylines:

Storyline 1) There’s massive potential downside with today’s launch. To put things in context, this is SpaceX’s 25th launch. The first three were failures. The next 20 were successes. Then, in the most recent launch, they failed. And that brings us to today. The failure, which happened because one of the hundreds of two foot steel bars in the rocket snapped unexpectedly, was devastating to SpaceX and everyone who works there. Having a long success streak was a key point in discrediting all those in the aerospace industry who said private companies shouldn’t be trusted. SpaceX’s overall record is still outstanding, but the failure was an unfortunate chink in the armor. It also means the stakes for today’s launch are astronomical. One failure is a fluke—two consecutive failures would be a serious problem for SpaceX.

Storyline 2) There’s massive potential upside with today’s launch. As I detailed in Part 4 of the SpaceX post, the major challenge for the entire aerospace industry is cost reduction. And the main problem with cost is that each rocket flies exactly once. Imagine if airplanes only few once—a plane ticket would cost $1.5 million. The air travel industry is a big thing only because they can reuse the same plane again and again and again. In order to create a genuinely reusable rocket that revolutionizes the cost of space travel, you have to figure out how to land the giant first stage of the rocket vertically. For decades, space agencies around the world have put billions of dollars into figuring out how to land a rocket successfully, and no one has done it. Quick blue box.

The No Jeff Bezos Didn’t Just Do It Blue Box

The other day, Jeff Bezos’s rocket company Blue Origin did something cool. They launched a rocket up to an altitude that we define as the beginning of “space,” and then brought it down and landed it successfully on land. That’s awesome—kudos to Jeff and Blue Origin. But let’s be clear—what Blue Origin did is a (much) higher version of what SpaceX has done many times with their grasshopper tests. They launched a rocket upward, gave space a high five, and then came back down to Earth. It’s a great achievement, but it’s something SpaceX could have done years ago if that were their objective.

What SpaceX is trying to do is roughly 100 times more difficult. Some reasons:

A) They’re trying to do it on a real launch with a real payload, meaning they’re carrying a huge amount of stuff and have very little room for extra fuel for descent.

B) They’re going to orbit, which is very different than going to space. Space means going 60 miles up and coming back down. Orbit means going higher up, but more importantly, it means going unbelievably fast sideways. You can’t just go “float” in orbit, because gravity in low Earth orbit is almost the same as gravity on the Earth’s surface—to stay in orbit you have to be going so fast sideways that it’s like a giant throwing a ball so hard that by the time it curves down to the Earth, the curvature of the Earth’s surface is falling away proportionally. Being in orbit means continually falling towards Earth.

So when you put A and B together, you have SpaceX trying to land a rocket that’s going much higher and much much faster than Blue Origin’s, but with far less fuel to use for descent.

This isn’t to take anything away from Blue Origin’s awesome accomplishment. But it shouldn’t even be talked about in the same conversation with SpaceX’s attempts at landing a rocket.

No I’m not. Cause he really didn’t do it first. At all. Read what I just said. Shut up.

One way in which Blue Origin has bested SpaceX is by somehow making their rocket even more dick-like than the Falcon 9—something no one in the space industry thought possible.

SpaceX is going for the landing today. If they can make it happen, it’ll be a truly historic moment in the Story of Humans and Space and a game changer for humanity’s future as a space-faring civilization. This may not have a proper level of buzz in the general public, but you can be sure everyone at Boeing, Lockheed, ESA, China’s Space Program, and Russia’s Space Program will be watching intently. 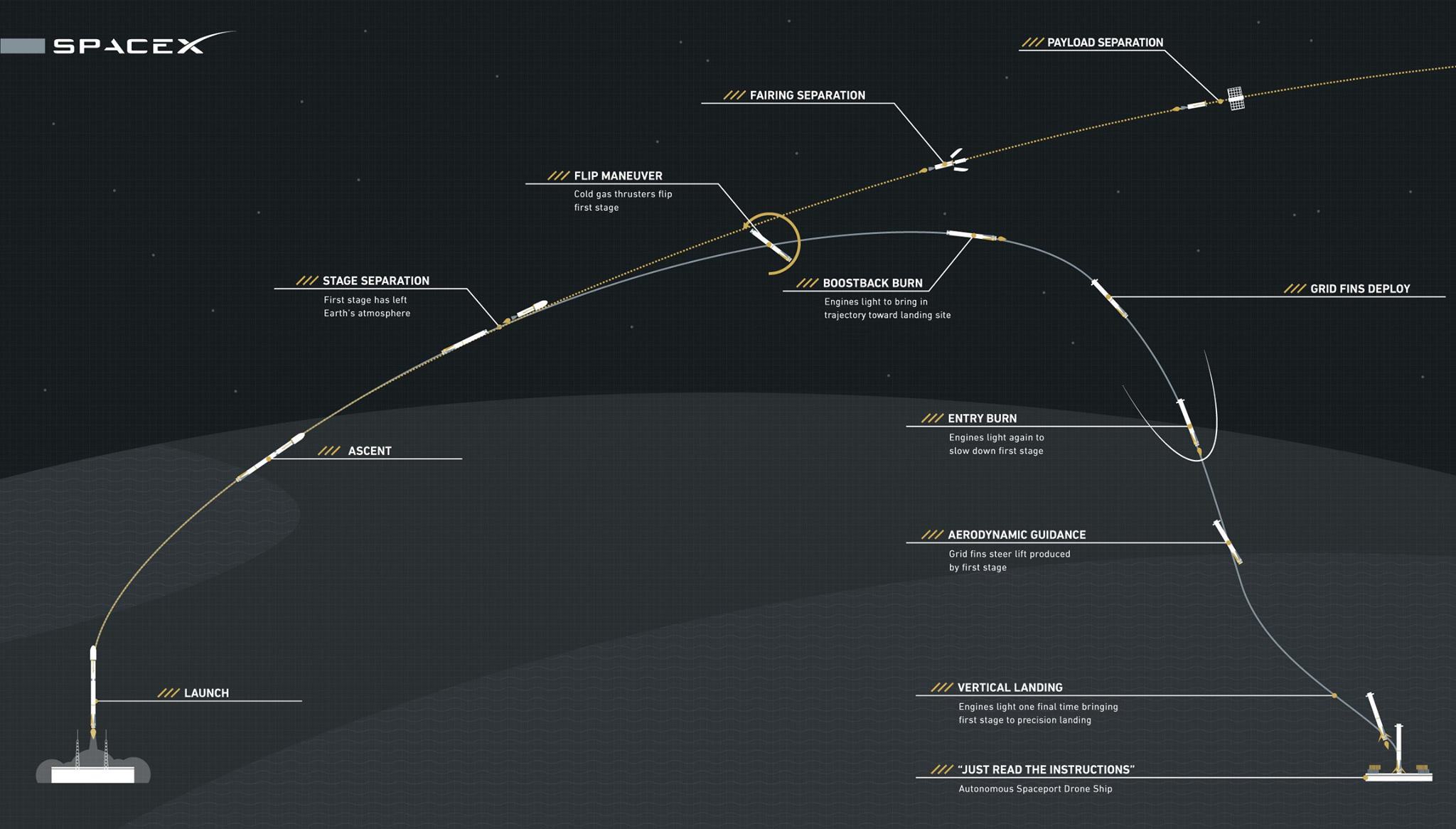 Except instead of landing on a platform out in the ocean (the diagram was made for a previous launch), in this launch they’ll be trying to come right back to the launchpad vicinity and land the rocket on land. The real deal. (Update: here’s a version made by Reddit user zlsa that shows the path tonight’s first stage will take.)

How hard is this? Here’s an excerpt from the SpaceX post:

This is hard. If you scale down all the sizes, it’s like firing a pencil over the top of a skyscraper and trying to land it on a shoe box on the ground—on a windy day. SpaceX likens the challenge of controlling the descent through the atmosphere to “trying to balance a rubber broomstick on your hand in the middle of a wind storm.” Popular Mechanics calls it “a tense juggling act, where any one of thousands of moving parts can push the entire system into mayhem. If the rocket does land softly on the barge, it’s because millions of insanely detailed self-adjustments have kept the Falcon 9’s composure as it dove through chaos.”

Storyline 3) Tim will attempt to be historically awkward on a live broadcast. While SpaceX attempts to make history, I’ll be working on my own place in the record books by trying to make the most awkward appearance in the history of live internet. The problem is that no one is quite sure why I’m there. All the other hosts work at SpaceX, and then there’s me, just kind of also there. Am I a friendly outsider host? An everyman there to ask questions viewers might have? A fun explainer guy? No one really knows. My plan is to just say words out of my face sometimes and hope no one notices that it makes no sense that I’m there. We did a rehearsal today and the whole thing was tough on everyone, especially at the moment when we were pretending the rocket just landed and the three of us gave a series of the most uncomfortable high fives imaginable. We all left shaken up. Just know that if today’s actual rocket lands only 90% of me will be elated, because the other 10% of me will be absolutely dreading the impending on-camera physical celebration.

My personal struggle aside, what you have here are four possible outcomes:

1) The terrible outcome: A mission failure—everyone at SpaceX will be massively devastated. I’ll wish I had a remote control I could press that would make me teletransport to anywhere other than where I am.

2) The fine/whatevs outcome: A mission success (meaning the satellites are successfully deployed) but they’re unable to land the first stage—SpaceX will be relieved and generally pleased but secretly disappointed because the historic thing didn’t happen.

3) The spectacularly great outcome: A mission success in orbit and a successful first stage landing back on Earth—SpaceX employees will go apeshit like their team just won the Superbowl on a last second Hail Mary.

4) The super awkward outcome: The launch goes normally, the first stage separates and lands successfully and SpaceX makes history! But then something goes wrong with the deployment of the satellites and the mission itself is a failure. A crestfallen client watches as SpaceX’s employees scream and celebrate. I frantically try to figure out what demeanor to have on. This is like your team winning the Superbowl on a last second Hail Mary but the person you’re in the room watching the game with had bet his life savings on the game and that last touchdown loses him the bet.

Finally, here are some key moments to look for:

T-20:00. (which means 20 minutes before launch): Webcast begins. Pray for good weather or launch will be postponed. The next 20 minutes is full of me and the hosts saying words. There are also two pre-taped segments that will play at some point where I say “yeah” and “right” like 300 times as my contribution.

T+1:00. Sometime in the next half a minute, the rocket hits “max Q.” This is the moment when the rocket is getting its ass kicked the most by the atmosphere. If something is faulty in the rocket, this is probably when everyone finds out. Getting past this is a big relief for SpaceX.

T+2:30. Sometime around here, the first stage separates and begins its descent back down to Earth while the second stage engine fires up so it can take the payload up to orbit. This is another moment when things can go wrong, and SpaceX will exhale a little more if/when this happens smoothly.

T+9:30. Around this time, the first stage will be either landing on Earth triumphantly or crashing onto Earth upsettingly and exploding.

T+15:00. This is when the 11 satellites will begin deploying, starting with the first two.

T+20:00. Here, if everything goes as planned, the last satellites deploy and the mission is officially a success.

Launch is at 8:33pm EST tonight. Webcast starts a little after 8:00. Fingers crossed.

For the full, full, full story about SpaceX and launches and colonizing Mars, here’s the WBW SpaceX post.

UPDATE: Below is the recording of the entire webcast: