In the Dinner Table intro post, I compared content sites to fly paper and people on the internet to flies swarming around that either “stick” to the fly paper or don’t, depending on how much they like, need, or connect with the site.

But the thing about the swarming internet-users is that they’re not just flying around haphazardly—i.e. searching around Google for something to do on the internet—so it’s not as simple as planting your site’s fly paper up on your site’s URL and waiting for new people to hit it.

Instead, today’s internet content world is all about sharing—some of which happens through email, but most of which happens on the major sharing platforms. Sharing platforms—Facebook, Twitter, Reddit, Stumbleupon, etc.—are like large pots of honey in the internet forest that have huge swarms of people buzzing around them at all times. When a person doesn’t have a particular internet destination in mind, she heads to one of the honey pots by default.

But not all honeypots are equal. Looking at every visitor who’s landed on Wait But Why since the day we launched, here’s how they got to us: 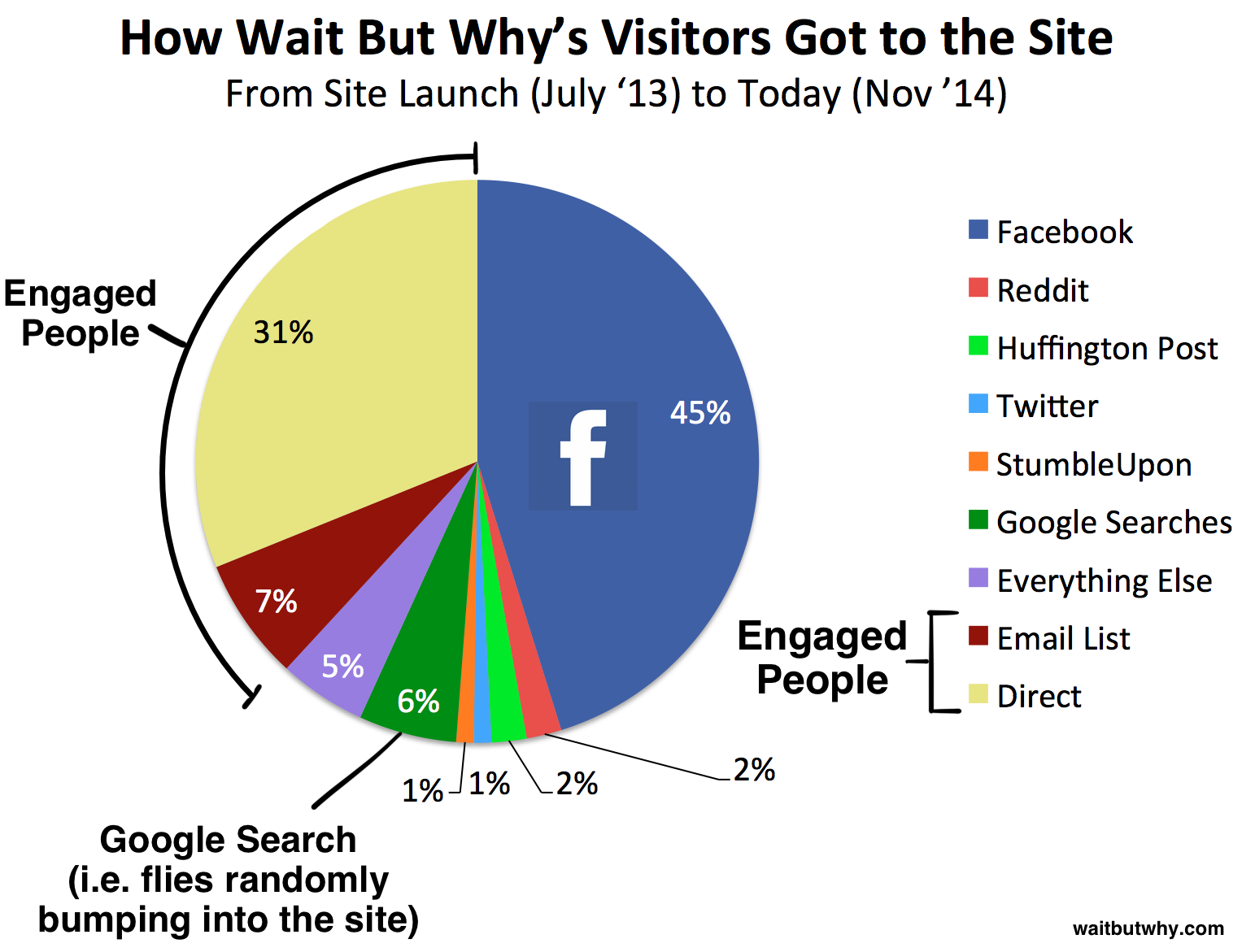 Through the lens of a content site, you can divide the world into three groups:

1) Engaged People. Engaged people like the site enough to remember to come back on their own or subscribe by email.

3) Non-Engaged People. Everyone else who either came to the site and forgot about it or haven’t heard of the site at all.

For this discussion, the engaged people are simple. They like you for now, and your job is to keep delighting them so they don’t unstick themselves from the fly paper and leave. On the chart above, they’re represented by two slices: Direct (people who come to the site directly without clicking a link elsewhere to get there) and Email List (email subscribers who come to the site by clicking a link in an email we send). Everyone else in the chart, for the most part, is either partially engaged or non-engaged—let’s take a closer look at the breakdown of those groups by removing the Direct and Email List slices: 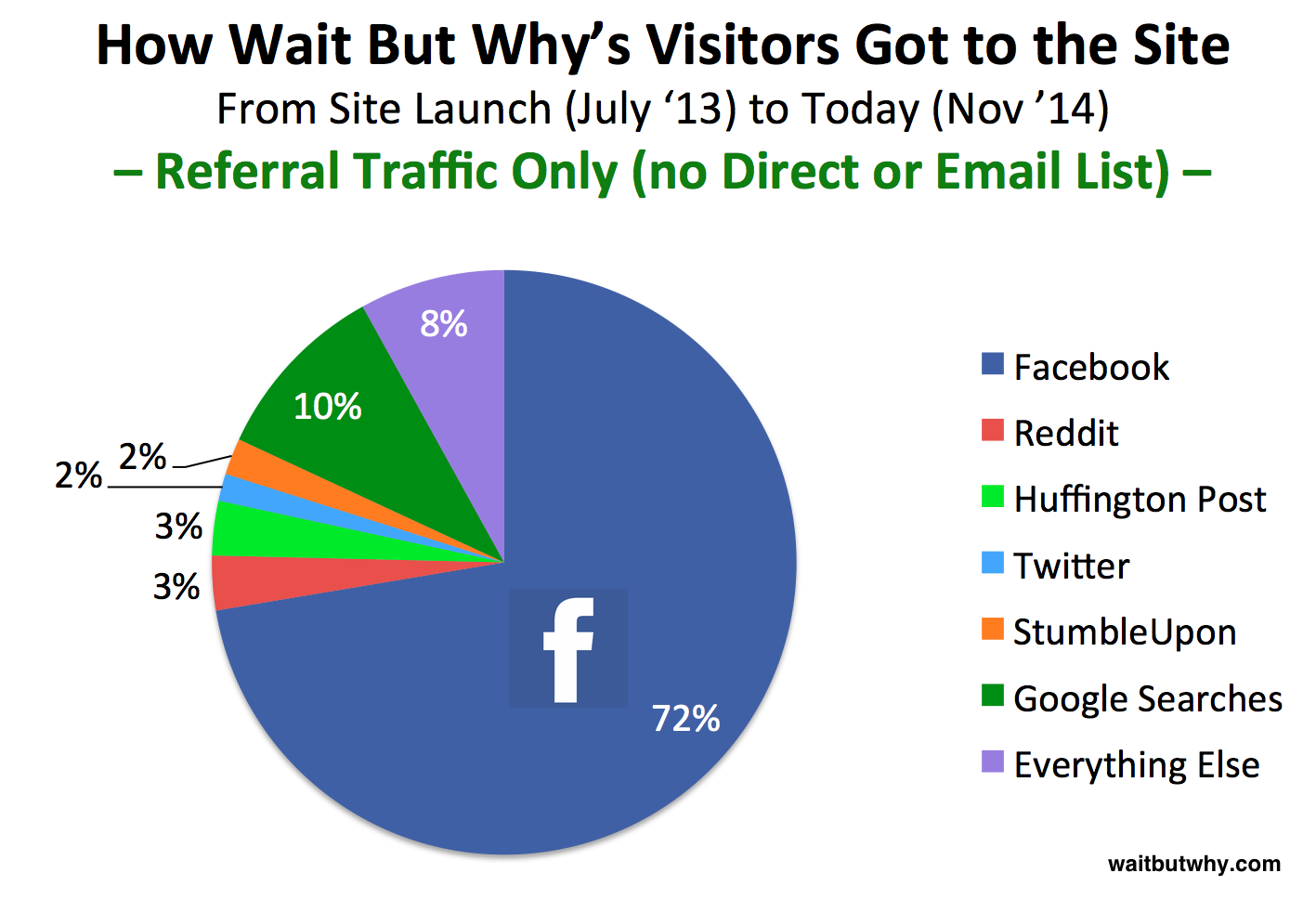 So it’s not really that there are a bunch of honeypots. For us, at least, there is one grand, 12-foot-high honeypot in the middle of the forest—Facebook—and then a handful of small honey jars scattered around. Facebook is the king of sharing right now.

And as far as we’re concerned, there are only two kinds of people hanging around this grand honeypot: 1) those who have “liked” Wait But Why on Facebook, and 2) those who haven’t. Why is this important? Because liking us on Facebook is a way for someone to tell us “Hey feel free to come say hi to me on my Newsfeed sometime.” Some of those likers are in the “already engaged” group and will come visit us regardless of Facebook, but another group of these likers are in the “partially engaged” category—if we end up on their newsfeeds, they may visit the site, but they probably won’t come to the site on their own otherwise.

When people think about Facebook advertising, they think about companies paying to reach the far vaster group of people who have not liked your page—the hundreds of millions of non-stuck people.

What people might not know is that there’s a second kind of Facebook advertising—paying money to reach the people who have liked your page. No one is more aware of the size and power of Facebook’s honeypot than Facebook, and they’ve created a business preventing sites from reaching, for free, even those who have expressed that they’d like to hear from the site.1

Sites like Buzzfeed or Upworthy with huge advertising budgets can reach millions of newsfeeds of non-engaged people who haven’t liked their page. As a smaller site, our main goal is to end up on as many of our Facebook likers’ newsfeeds as possible with our big weekly post. If we don’t pay anything, Facebook will only put a post of ours on about 5% of our likers’ newsfeeds—to reach more, we need to pay. The amount this costs changes as Facebook continues to tweak their system, but to reach the meat of our Facebook fans, we’d have to pay close to $1,000/post. We can’t do that, but we do spend a significant amount on this. Facebook spending is the single largest expense we have, and it’s where most of our store revenue goes.

And that’s about as sophisticated a marketing strategy as we have currently—we connect to engaged people automatically and for free, we can’t afford to reach non-engaged people (but our readers sharing helps us reach a huge number of them), and what we spend our money on is getting our main front-page post onto as many of the partially-engaged people’s Facebook newsfeeds as possible.

At the moment, the vast majority of our energy and resources goes into what’s actually on the site, but given this week’s Dinner Table topic, it seemed like a good time to shed light on some of the marketing efforts we’re putting in behind the scenes and the immense power of Facebook in today’s world of content.

(If you would like to make sure you hear about our new weekly post, make sure you’re signed up for the email (orange box in the sidebar), and when an email comes in from us, drag it from promotions to the primary tab and tell Gmail to do this in the future for WBW emails.)