Note: This post is an add-on to the post “Why is My Laptop On?” for those who want to become someone who understands energy better than pretty well but still not really well.

In 2014, we’re constantly hearing words like clean energy, solar power, fossil fuels, carbon emissions, the price of oil, and fracking. And if you’re like me, you know what some of those words mean but you’re hazy on others.

So here’s a little overview of the major types of energy in today’s world and a little bit about each.

Renewable Energy, sometimes called Green Energy or Clean Energy, is warm and fuzzy and everyone likes to hold hands and sing songs about it. This is because A) it uses resources that are essentially infinite, like water, wind, or sunlight, or those that can be replenished on a human time scale, like wood, and B) it does very little harm to the environment, relatively speaking.

Unfortunately, renewable energy is a minor part of the energy equation and looks to continue being that way for a long time—the problem is that compared to other energy sources, renewables are expensive or inefficient to implement, and countries aren’t really that into hurting their current productivity and global competitiveness for long term reasons, especially if the other countries aren’t doing it alongside them (we’ve tried to all agree to do it together—and it hasn’t worked). The end result is that renewable energies make up only 19% of the world’s energy, and the cleanest, greenest types that you hear about most make up just about 1% of the world’s energy consumption:

Biomass energy is created by burning living or recently-living organisms or manufacturing them into fuel—common examples include burning wood or converting corn into ethanol fuel.

When people talk about clean energy, you don’t often hear the words biomass or biofuel. This is because it’s both less renewable and less clean than the other clean energies. But if you’re going to include biomass in the renewable category, it makes up most of world’s renewable energy.

The bad news is that, unlike the other types of renewable energy, bio-related energy does add to carbon dioxide emissions, often requires a great deal of soil, and its resources aren’t infinite like the sun, wind, or water are.

Hydropower is the other relatively prominent renewable energy, representing almost 4% of the world’s energy and over 8% of the electricity in the US.1 It works by harnessing the power of gravity by placing a dam in front of water that’s falling or rushing downstream. When the water forces its way through the dam, it spins a turbine (a big propellor) which rotates coils of copper wire between magnets—this generates electricity, which shoots out into wires and into the electrical grid.

This process of spinning a turbine to generate electricity is at the heart of most power plants and the origin of nearly all the electricity you’ll ever encounter.

Wind energy—which is used entirely to generate electricity—makes up about .5%, or 1/200th of the world’s energy consumption. A super-clean and harmless type of energy, wind power is fast growing and already pretty big in some places (Denmark generates over a quarter of their electricity from wind).

You hear a lot about solar power, but right now, solar covers only about .3%, or 1/300th or the world’s energy consumption (sometimes as electricity, sometimes as heat). A ton of research and innovation is going into solar technology, and it’s the fastest growing renewable energy in the world.2

It’s also amazing how little of the Earth’s surface you’d need to cover with solar panels to power the entire world. Here’s how little (courtesy of LAGI)3: 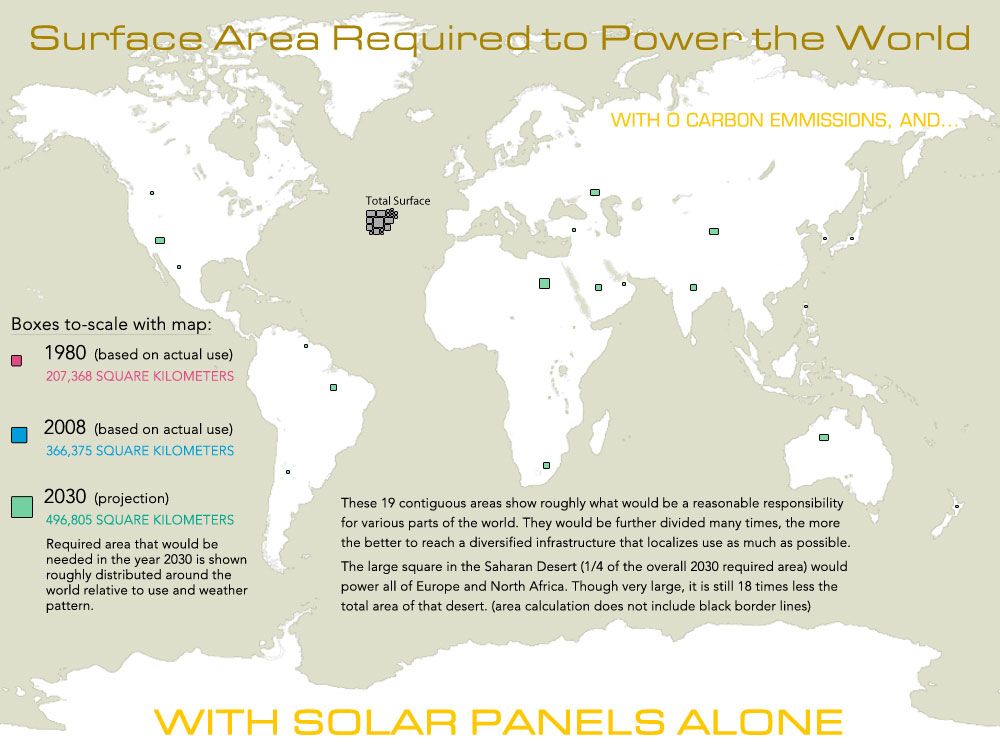 Georthermal power plants use the force of natural steam emerging from the hot inner Earth to spin turbines and generate electricity (and like solar, geothermal is often used for heating as well). Right now, geothermal power covers only about .2%, or 1/500th of the world’s energy consumption.
Alright, enough of the soft shit. Moving up in intensity now to what might be powering whatever you’re reading this on (but probably isn’t)—

Nuclear energy is controversial. Some feel positive about it,4 often going so far as to lump it into the renewable energy category, and argue that it’s both sustainable and good for the environment because it reduces harmful emissions. Others think those people are stupid,5 and that between catastrophic accidents, harmful waste disposal, high costs, and the increased risks of nuclear proliferation and terrorism, the effects of nuclear power should be considered as bad or worse than those of fossil fuel energy.

The pessimists’ case was strengthened in 2011 when a tsunami smashed into Japan and caused the Fukushima nuclear power plant to meltdown, resulting in the most harmful nuclear disaster since the hideous Chernobyl meltdown in 1986. After the Fukushima disaster, a number of countries decided to cut down or ban nuclear power all together (Germany and Italy are two).

And while these horrible disasters take a huge toll and fully expose nuclear energy’s downsides, over time, nuclear energy has caused fewer fatalities per unit of energy generated than any other major source of energy (coal, petroleum, natural gas, or hydroelectric), and since 1kg of uranium-235 can generate 2-3 million times as much energy as 1kg of coal or oil, without adding to our CO2 problem, there seems to be compelling reason to further explore nuclear energy.

As of 2011, nuclear energy represented 2.8% of the world’s energy consumption, but over 8% of energy in the US (all in the form of electricity).

And now, onto the bad boys—

Undoubtedly the most dickish of energy sources, the burning of fossil fuels (coal, oil, and natural gas) make up 78% of the world’s energy consumption (82% in the US), and they’re probably responsible for powering whatever device you’re using to read this post.

Fossil fuels can be credited for enabling the Industrial Revolution, raising the quality of life for the masses by growing the middle class, and thrusting the world into modernity. They can likewise be credited for about 90 environmental catastrophes, including global warming, acid rain, water contamination, oil spills, increased lung cancer, pollution and smog, and that polar bear in the video being extra sad because his ice is melting.

The question, “How bad are the effects of burning fossil fuels, what does it mean for the future, and what should we do about it?” is an entire post in itself, and one for another time. For today, let’s pleasantly ignore all that and just try to understand what fossil fuels are and where they come from.

The basic idea behind fossil fuels is that coal, oil and natural gas are all the remains of ancient organisms (mostly plants and mostly those from the Carboniferous Period 300-360 million years ago) who died and whose energy was partially preserved before they decomposed. After many millions of years of being squashed under the intense heat and pressure of the inner Earth, these organisms and their stored chemical energy have been converted to fossil fuels—and they’re still underground. We can now mine them up to land and burn them, which releases their stored energy (and emits lots of CO2 in the process). Most of the electricity and gas we use and nearly all of the energy our cars and planes run on comes from the burning of fossil fuels. People in the year 2300 will look upon this time as the Fossil Fuel Era of human history.

Coal, a black sedimentary rock that’s found in underground layers called coal beds, is used almost entirely for making electricity, and is the most prolific material at doing so. Because coal is plentiful and relatively cheap, the world goes through a ton of it—but it’s also the worst culprit for CO2 emissions, releasing about 30% more CO2 than the burning of oil and almost double that of natural gas when generating an equivalent amount of heat.6

The US is to coal as Saudi Arabia is to oil, possessing 22% of the world’s coal and the most of any nation. China, though, has become by far the world’s largest consumer of coal—over half of the coal burned in the world in 2011 was burned in China.7

When you hear people talk about oil, they’re talking about crude oil, also called petroleum—a gooey black liquid normally found in deep underground reservoirs. When crude oil is extracted, it heads to the refinery, where it’s separated, using different boiling points, into a number of distinct fuels and gases—the most prominent being gasoline (about 45% of every barrel), but including everything from jet and diesel fuel to motor oil to the propane you use for your grill to candle wax. In most parts of the world, oil’s purpose is transportation fuel, not for generating electricity.

The United States is by far the biggest consumer of oil in the world, consuming over 20% of the world’s oil and about double the next biggest consumer. The US is also one of the three biggest oil producers in the world, alongside Saudi Arabia and Russia, who all produce roughly the same amount. But the US hardly has the most oil reserves—that’s all in the Middle East: 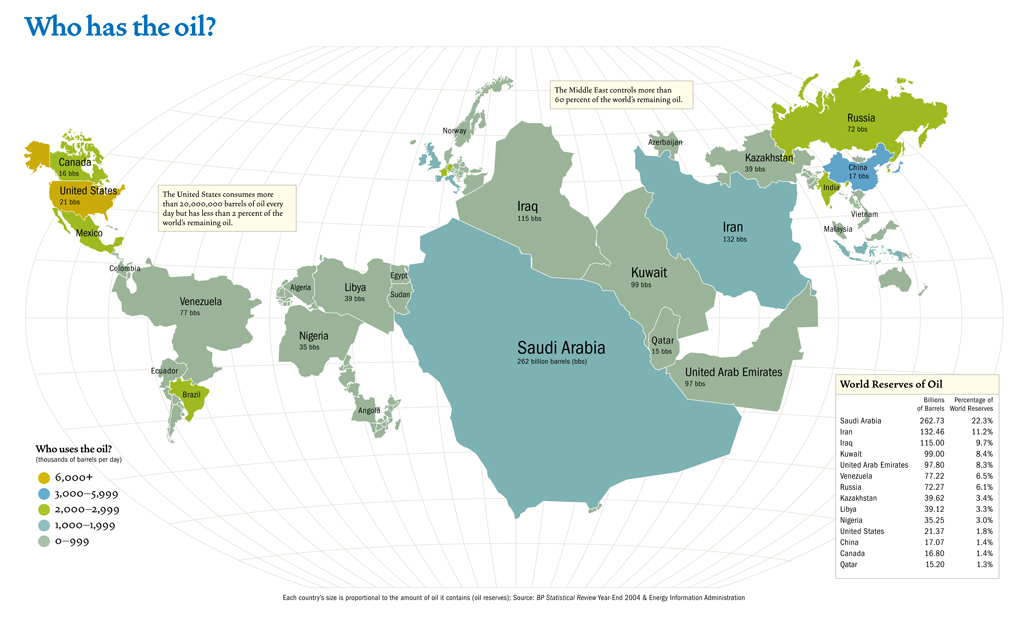 1) Why Saudi princes have such fancy palaces
2) Why Saddam Hussein wanted to steal Kuwait so badly
3) Why Dubai has things like an indoor ski resort, a few hundred man-made islands, and the world’s tallest building

All in all, the Middle East has over 60% of the world’s remaining oil reserves.

One other interesting thing—when I looked at an image9 of the actual oil fields, it struck me how small a part of the land they were. For example, Iran is almost entirely barren of oil, but that little sprinkling of reserves on the far west side of the country is enough to make it the second-richest oil nation in the world: 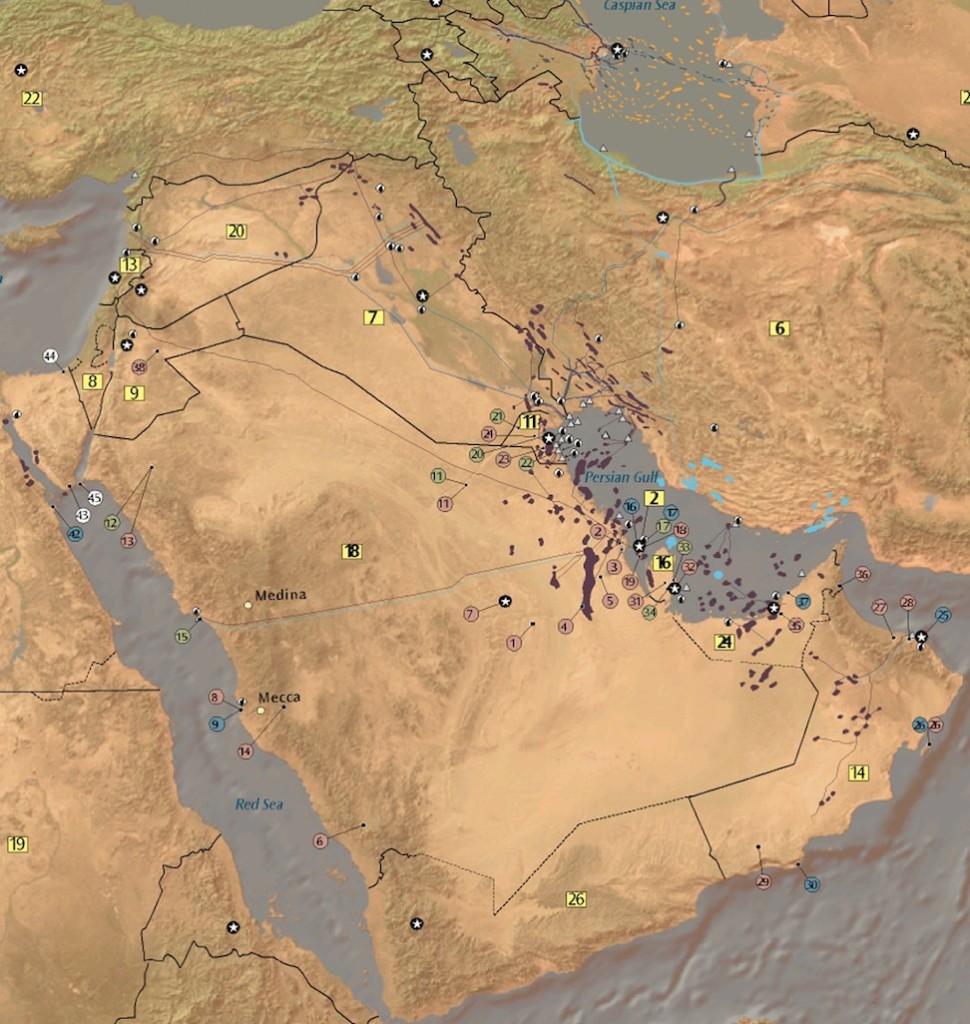 We’ve been talking about conventional oil, but there are also great reserves of “oil sands”—rocks or sludge that contain oil—in Canada and Venezuela. It’s expensive and inconvenient to extract this oil, but if/when normal oil begins to run dry, the world will likely tap into these extra reserves.

Natural gas is essentially gaseous methane found in pockets underground, or sometimes embedded inside shale rock. This is the gas that fires up your stove or heats your apartment (if those aren’t electricity-powered), and also one of the major sources of electricity (it makes up about 20% of electricity in the US). Natural gas is on the rise and now makes up almost a quarter of the world’s energy.

One of the reasons it’s on the rise is that scientists have found a new way of extracting natural gas from the Earth called hydraulic fracturing, or “fracking,” which uses a mixture of water, sand, and chemicals to create cracks in natural gas-rich shale and force out the gas. This method has been hugely effective, but it’s also controversial because of some serious environmental concerns—this video explains it well.

So how much is left?

According to the US Energy Information Administration, here are the remaining proven reserves of the three fossil fuels10:

Adding this all together, the volume of oil and oil equivalent that represents the total that remains of all three fossil fuels is 1,481 km3. That would make a cube with a side of 11.3 km, or 7 miles—it would cover most of Brooklyn, and contain all fossil fuels left on Earth. Using the same “oil equivalent” method, each year, the world’s fossil fuel consumption amounts to a cube with a side of about 2.4 km, or 1.5 miles—this would fit nicely on top of downtown Manhattan.

Finally, here’s a great visual11 laying out all the energy sources we just discussed and their usage in the US in 2012 (a “quad” is a quadrillion BTU—the US’s 95.1 annual quads of energy consumption represents a little under a fifth of the world total). Interesting to see how much produced energy ends up going to waste: 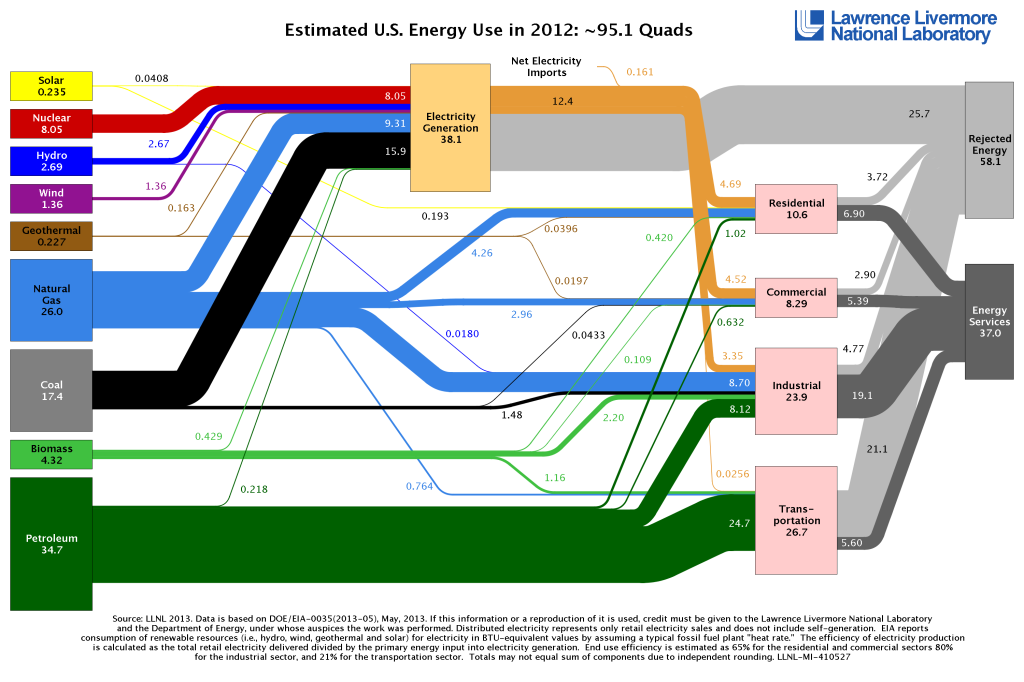