There are depressing moments. There are dark places.
And then there’s being a 31-year-old man carefully stacking Sour Patch Kids on the kitchen counter in a silent apartment at 2:00am.
To understand how I ended up here, let’s back up a couple hours to midnight, when I was staring at my computer at a half-completed post that I hated.
The thing about bad Wait But Why posts is they don’t like to reveal themselves right away—they like to disguise themselves as good posts until I work on them for a long time, and then they’re suddenly like, “Oh btw I’m a very bad post.” And I find myself sitting there in despair, realizing I need to scrap all the work and start something different.
So that’s what I did at midnight last night and decided instead to do a post I’ve been wanting to do for a long time—visually depicting massive numbers, to help get my (and your) head around words like “quadrillion.”
The obvious means to do this was to use cubes like those wooden cubic centimeter and cubic decimeter cubes that were in our 3rd grade classrooms, but it was late at night and in my mixture of despair and delirium, I ended up making a fairly inexplicable and weird decision to use Sour Patch Kids as my unit of measurement instead. I don’t understand it any better than you do, but it turned into me heading to 7-Eleven at 1:00am to stare at this wall for like 70 seconds: 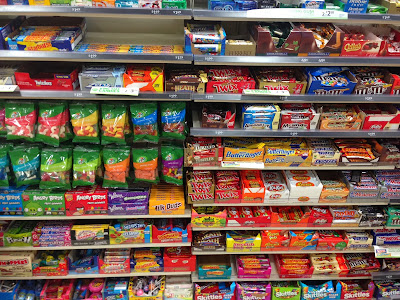 And somehow, there were no Sour Patch Kids.

I wandered around the store for awhile, and finally I came across this, which I looked at for a long time before determining it really wasn’t what I wanted. 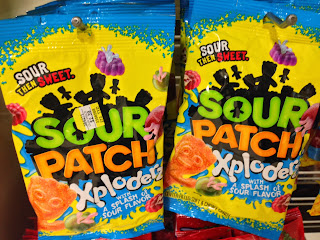 I moved on and headed to a nearby convenience store. They also had no normal Sour Patch Kids, just some irritating “eXtreme” version. I wasn’t pleased, but it was late, I was aging, and they seemed close enough, so I bought ten bags. 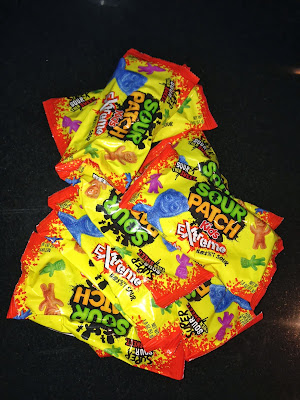 I can’t imagine what the cashier thought as I made this 1:30am purchase, other than “this guy is about to have one of the most depressing solo parties of all time.”

I finally made it back home, broke open the bags, and started measuring. 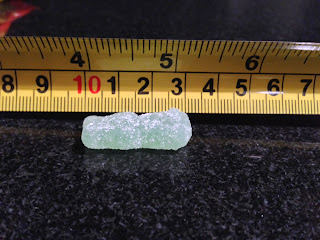 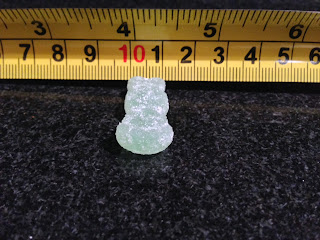 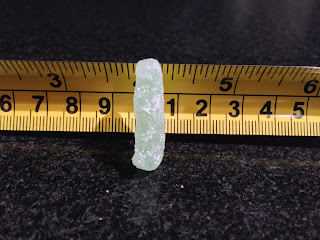 Next I lined up 10. Note the unappealing, radioactive colors Cadbury has chosen for its Sour Patch Kids eXtreme brand: 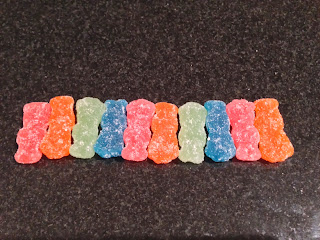 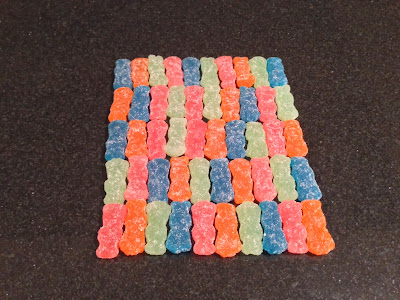 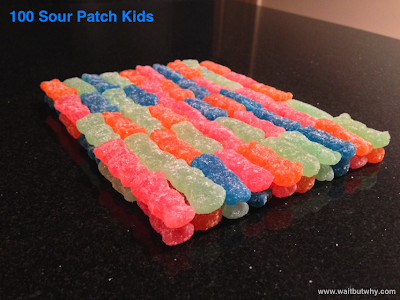 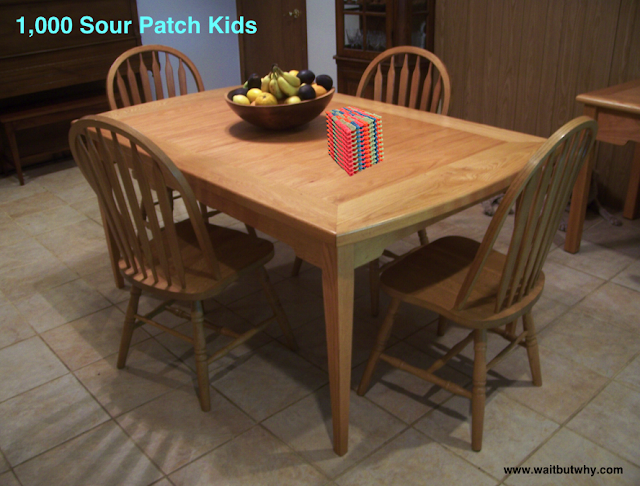 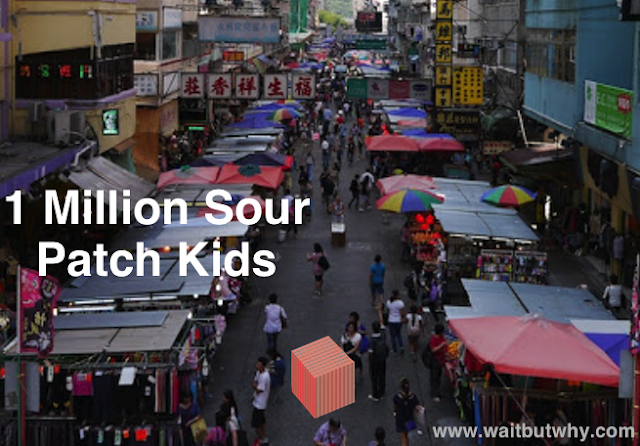 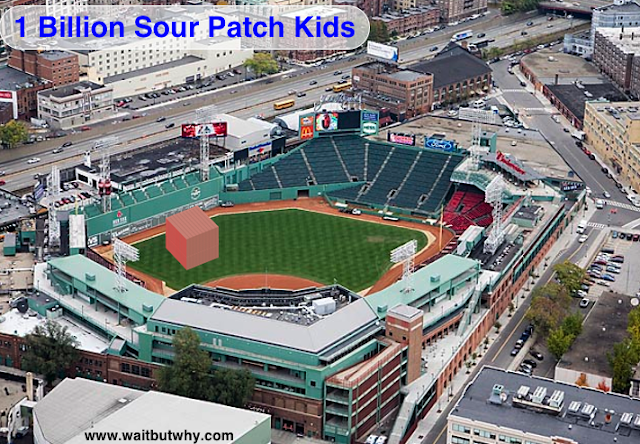 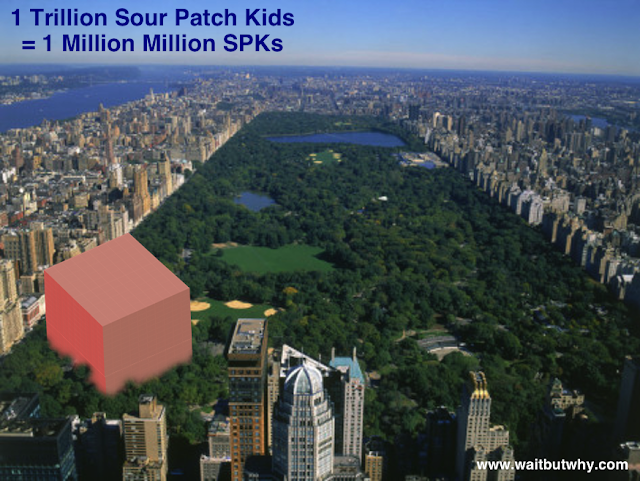 This helps illustrate just how huge a number a trillion is. A trillion is important because it’s the largest number that comes up in day-to-day life. We come across a trillion mainly when it comes to the government and money, and it’s such a large number, a stack of a trillion tightly-packed Sour Patch Kids would cover a football field and be as high as a 30-story building.
Now we enter the realm of numbers that are normally impossible to conceptualize. Luckily, we have my idiotic Sour Patch Kids method to help.
Taking 1,000 of the football stadium-size trillion box above and arranging them in a 10 x 10 x 10 box with dimensions 1km x 1km x 1.5km, we now have 1 quadrillion Sour Patch Kids, covering most of Downtown Manhattan. A quadrillion is a thousand trillion, or a million billion, and written out, it’s 1,000,000,000,000,000.
For reference, I put the Empire State Building and the world’s tallest building, Dubai’s Burj Khalifa, next to the box. 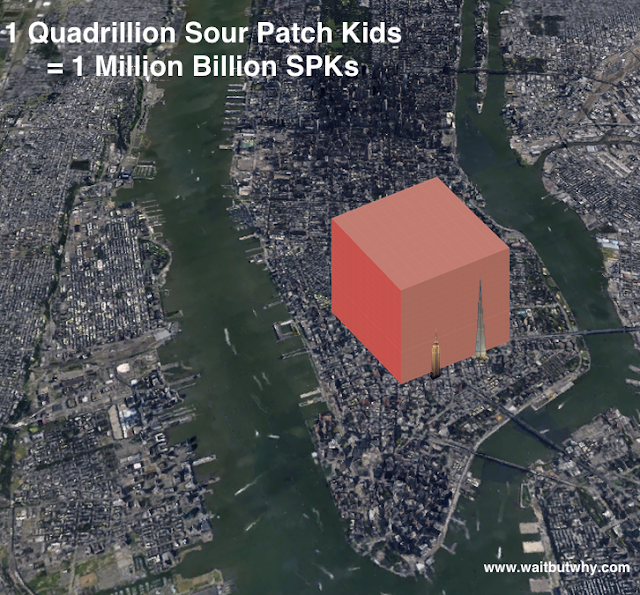 If you’re wondering, experts say that there are somewhere between one and ten quadrillion ants on Earth.
The next step is a quintillion. At their highest cruising altitude, commercial flights fly just above the top of this 10km x 10km x 15km box, which covers most of West LA: 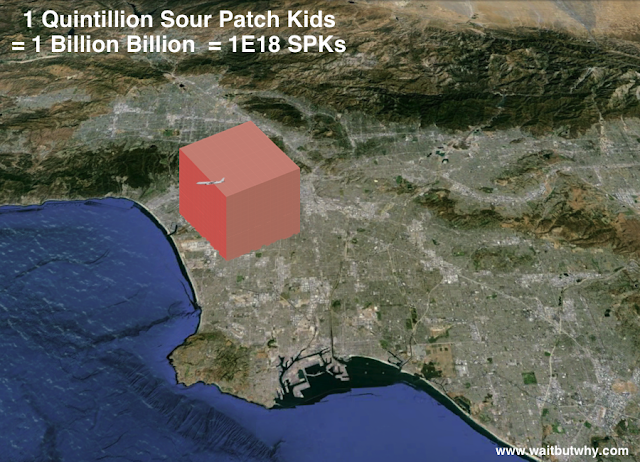 Want to know how small an atom is? According to Physlink.com, there are 1.2 quintillion atoms in a grain of salt. So think about this massive airplane-height stack of tightly-packed Sour Patch Kids above. There are more than that many atoms in one grain of salt. Even more shocking is that NPR says that the number of grains of sand in the world is roughly 7.5 quintillion, only about seven times greater than the number of atoms number in a grain of salt. Further, 1.7 quintillion represents the number of Sour Patch Kids you’d need to blanket the entire surface of the Earth with them. I depicted 1.7 quintillion below—so if you spread this box out into one layer, it would completely cover every inch of the planet: 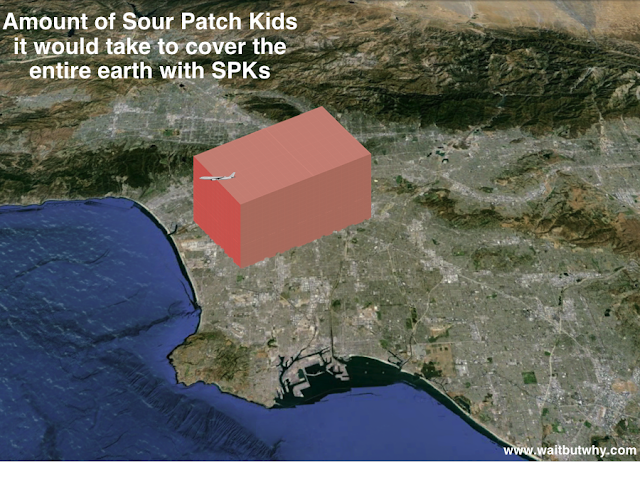 1,000 quintillion boxes gets us to 1 sextillion, or a billion of those trillion boxes we saw sitting in Central Park above. 1 sextillion Sour Patch Kids makes a 100km x 100km x 150km stack that covers Switzerland. Note the airplane depicting the highest commercial airplane altitude: 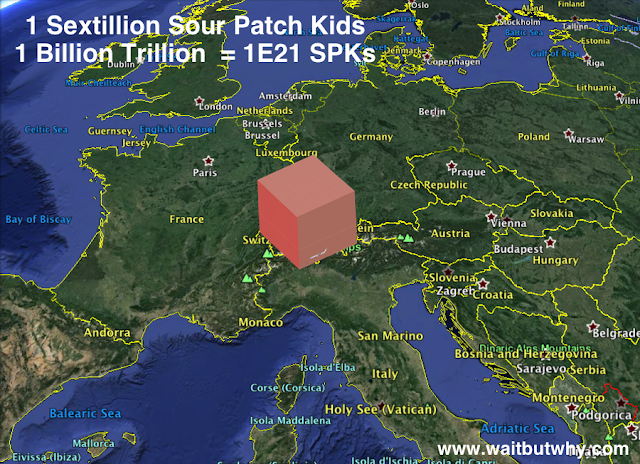 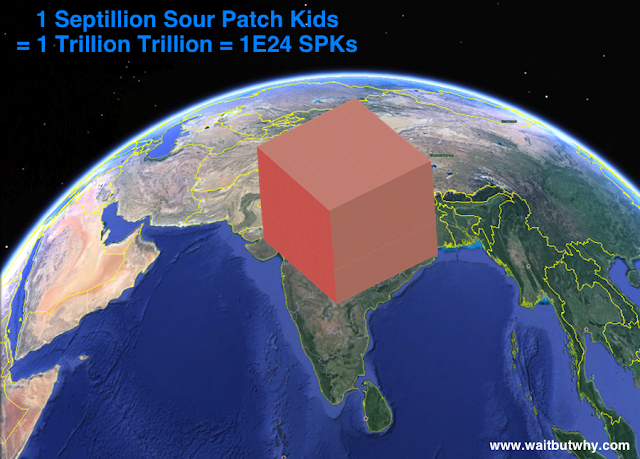 Any recollection of Avogadro’s Number from Chemistry class? It’s the number of hydrogen molecules in a gram of hydrogen, and the number of atoms in a mole. The number is 6.022e23, or .6 septillion, which is 60% of the box above. Avogadro was not attractive.
1,000 septillion is 1 octillion, and at this point we move beyond all relevant reference. An octillion Sour Patch Kids is about as big as the Earth: 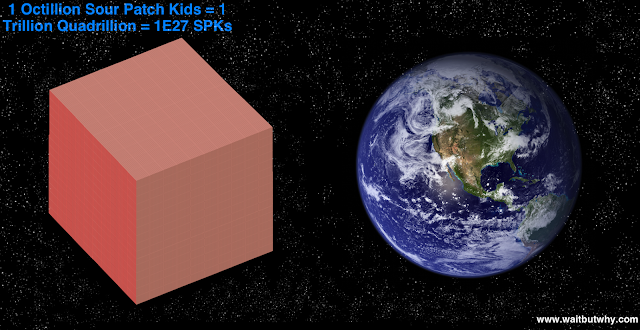 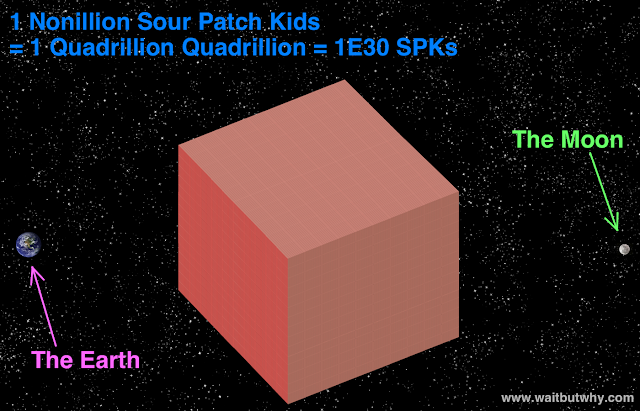 I am quivering to keep going. I need to know how big the next one (decillion) looks in comparison to the sun and how big the one after that looks in relation to the whole solar system and how many more illions until we’re bigger than the galaxy. But I’m gathering my strength and stopping. Because this is a post about big numbers, not about space and distances, and believe me, there will be a thorough post about space and distances some other time, since I’ve been seriously dating astronomy since I was three.
P.S. Sour Patch Kids are low quality. Nothing will expose something for being made in a factory in the cheapest possible way like opening ten packages of them and looking at a bunch of them for awhile.
P.P.S. I ate no fewer than 30 throughout the night even though I was increasingly appalled by them as I made my 100 structure.

Two more Wait But Why posts on upsettingly large numbers:

And three other Pointless Calculation posts:

Fitting all humans in a building

All the world’s wealth in a gold cube

All the world’s water in cubic containers