A friend dropped this one on me the other day—

A powerfully magical, but very dickish witch decides to cast a spell on all of humanity. With a single swoop of her wand, she makes all man-made objects vanish and restores the Earth to its pre-human, 200,000 BC state. What’s left is 7.3 billion naked humans, standing on grassy plains, in forests, in swamps, on tundra, and in deserts in the exact spots where their cities and villages were just a second ago.

The humans themselves are unchanged—each person knows everything they know right now.

The only other thing is that in each of their hands is a piece of paper with a note in their language that says, “I’ve cast a spell on all of humanity because why not. Here’s how it works: everything will remain as is until humanity manages to create a fully-featured and perfectly functional iPhone 6S. As soon as that happens, the spell will be reversed and all man-made objects will instantly reappear.”

One minute later, the notes all vanish.

So the question is, how would this play out, and what’s your estimate for how long it would take for humanity to create the iPhone and reverse the spell?

The only clarification here is that the iPhone created has to be good enough to pass as a new iPhone 6S sold in an Apple Store today. So humans submit the iPhone to the witch and she time travels back to 2015, right before she cast the spell. She takes it into an Apple Store and says she found this on the table out of its box—the Apple employees inspect it and test it out, and if they decide it’s fully functional and good as new, then the spell is reversed. Anything less than that—if for any reason the Apple employees don’t feel the phone is ready to sell as new, the spell remains.

Tim’s Answer: The more I’ve thought about this, the shittier I realize this spell would be for all of us. I, for one, would be standing naked on a foresty and very crowded Manhattan island: 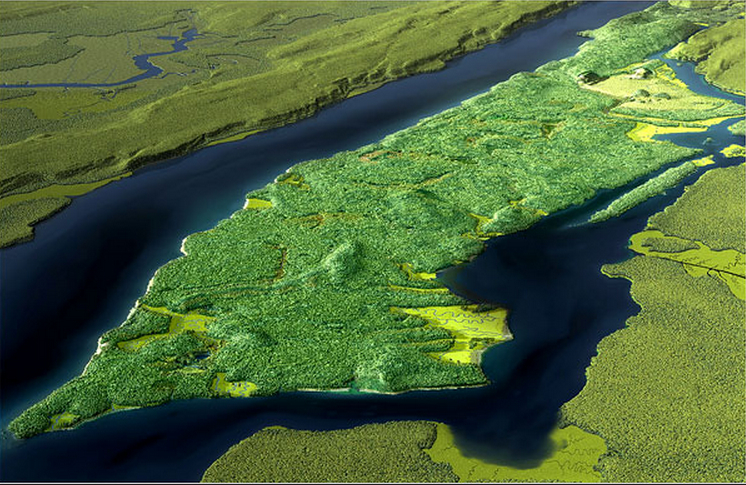 The first thing everyone would have to think about is water. If you’re lucky, you’d be not too far from fresh water, in which case you’d shuffle your naked ass straight to the river. You wouldn’t be alone. In the old days, most humans lived near rivers or lakes, but that was when the world population was a fraction of what it is now. So as people flocked towards the nearest river or lake, riverbanks would become swarmed with densely packed hordes of naked people. Disease and sickness would quickly become rampant.

And those are the lucky people—it’s been a while since most of humanity needed to be near natural fresh water, so many of the world’s people now rely on man-made reservoirs and systems that pump water to wherever they live, and they’d die of thirst within a few days of the spell. I’d probably be one of those people, since the Hudson right around NYC is actually mostly salt water and doesn’t become entirely fresh water for 150 miles.

Even if I managed to find a freshwater pond somewhere on Manhattan, I now have a new problem—food. Do you know how to farm? No, you don’t. Neither do I. How about farmers? Do they know how to farm without any equipment or farm-ready fields? Probably not too well. We’d all be hunting and gathering—and unlike our hunter-gatherer ancestors, who knew a ton about both activities, none of us know shit. Where are the animals? How do I catch them? How do I make a spear? I can find a branch and a sharp, pointy rock maybe, but can I fasten them together tightly enough to make a usable spear? How do I make a fishing hook? Are there even fish in the Hudson? What kind of vegetation on Manhattan Island is edible? Will whatever there is be gone soon when the two million starving people on the island have either eaten it all or secretly stashed it somewhere for their family?

How do we decide who’s in charge, and how do we get that information to everyone? And what’s the plan? Are we going to try to figure out how to do the whole Agricultural Revolution thing all over again? How do we do that in a short period of time when our low-level agricultural skills pale in comparison to the humans of 10,000 years ago and there are a few thousand times more people on Earth now than there were then?

While all of this is happening, we’d have to hope really hard that somewhere in the forests of what used to be Cupertino, California, the naked spear-wielding employees of Apple are somehow figuring out a plan. I have no clue how they’d do it, but the challenge at hand is unthinkable. How many different kinds of raw materials go into making an iPhone? In what parts of the Earth are they found, and how deep underground? Who at Apple or elsewhere even knows this information? If you somehow figure that out, how do you get those materials? You need mines, which you can’t dig and without serious construction equipment. You then need mining equipment and miners that know how to use it. Even if you had all the right raw materials, they come from different parts of the Earth—how do you transport them to one place? If they need to cross oceans, how the hell do you do that?

No one at Apple has any idea how to do any of this. Some of the answers to this giant puzzle are in the brains of living humans, but those people are scattered around the Earth. Most of the answers are only known by today’s computers and machines—none of which exist anymore.

And all those people who do know pieces of the critical information about the iPhone puzzle are currently dying of thirst and hunger and disease and cannibalism and getting speared to death by nearby people who want whatever food they have. How do they write what they know down? By painstakingly etching it into slabs of rock with other pieces of rock? By explaining it orally? If that information is lost, it sets the whole process back much, much farther.

We also can’t assume friendly cooperation during any of this. A lot of people will decide there’s no chance of the iPhone being made within their lifetimes and will stop working to support the mission, instead worrying only about fending for themselves and their families. Some might actually want to kill those with key information because they decide that it’s better if a new civilization is constructed and want to sabotage attempts at restoring the old one.

It wouldn’t be fun. It would be really not fun.

So how long do I think it would take? Part of me wants to say it would take like 1,200 years, because it would require a whole new civilization and world order to be built before it can happen. Another part of me thinks that maybe if people can somehow figure out how to organize and create a sustainable system of farming, there might be a possibility of enough mass cooperation to somehow make this happen in like 20 years. I’ll take my best crack: 300 years.