Note: This is the second post in a series. If you’re new to the series, start with the intro post. Visit the series home page for the full table of contents.

There is a great deal of human nature in people. – Mark Twain

The animal world is a stressful place to be. 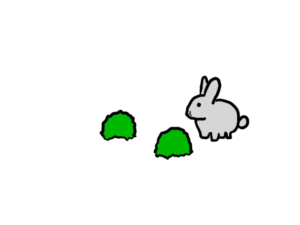 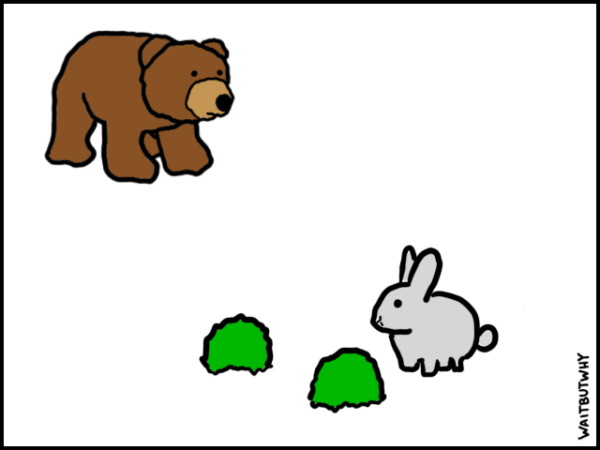 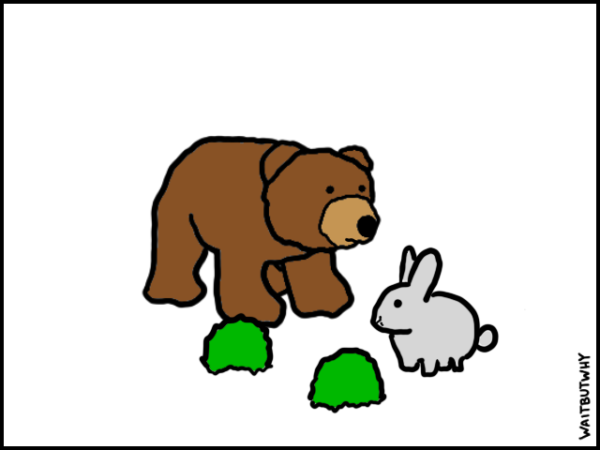 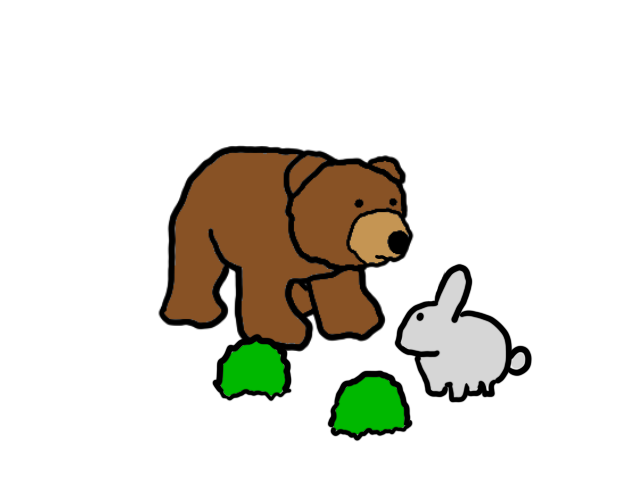 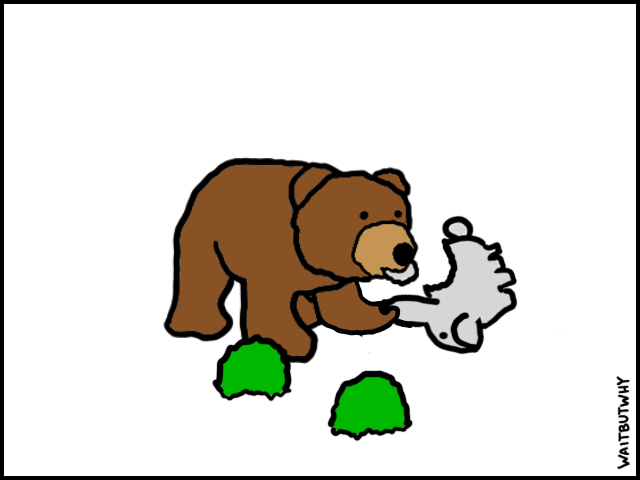 The problem is that the animal world isn’t really an animal world—it’s a world of trillions of strands of genetic information, each one hell-bent on immortality. And in a universe that wants to turn order into chaos whenever possible, the immortality of anything—let alone a delicate and complex genetic code—is a constant uphill battle. Most of Earth’s gene strands don’t last very long, and genes that weren’t talented enough at the immortality game are long gone. The genes on Earth today are the miracle outliers on both the motivation and talent front—such incredible survival specialists that they’re currently almost four billion years old and counting.

Animals are just a hack these outlier genes came up with—temporary containers designed to carry the genes and help them stay immortal. If genes could talk to their animal, they’d probably issue a few simple commands: 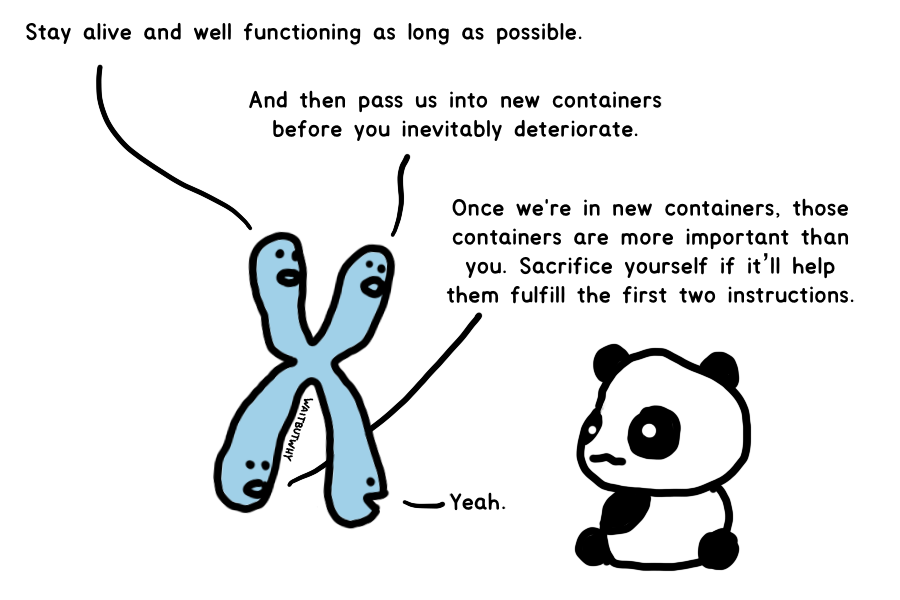 But genes can’t talk to their animals, so instead they control them by having them run on specialized survival software. 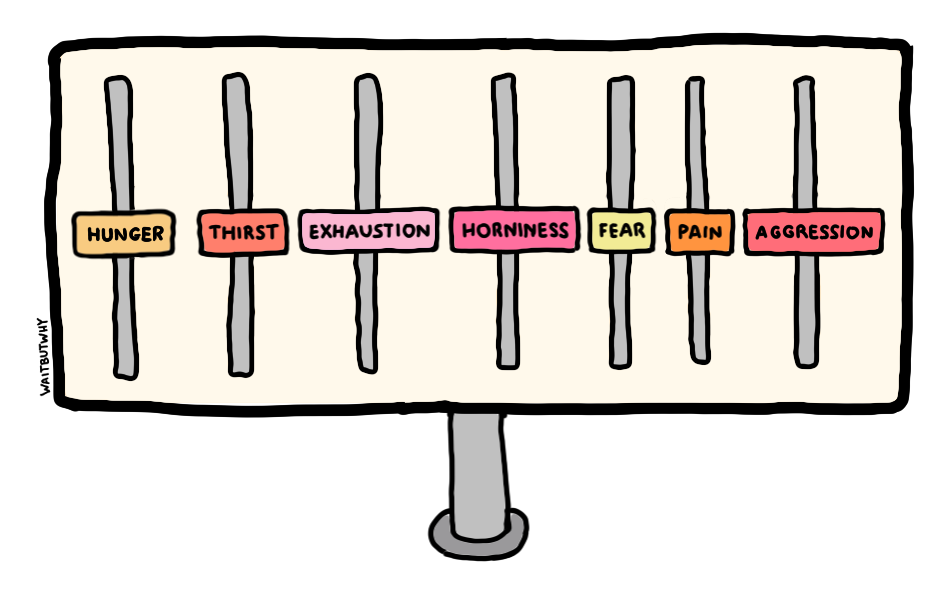 By sliding the animal’s feelings up and down, an animal’s software uses the feelings like reins to keep the animal’s goals and the genes’ goals perfectly aligned.

Genes need animals to conserve all the energy they can, so the software’s default settings will have “exhaustion” in a raised state. 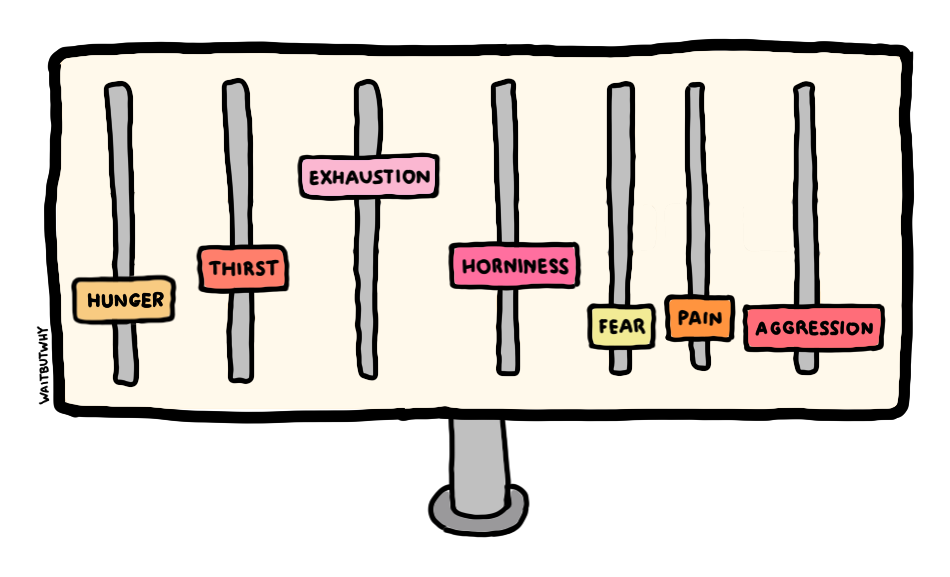 When everything is going smoothly, the software will run in the background on low-power mode. But at some point, the animal will start to run low on energy, so the software will kick into gear and shift the “hunger” setting steadily upwards until it eventually overpowers the “tired” setting. 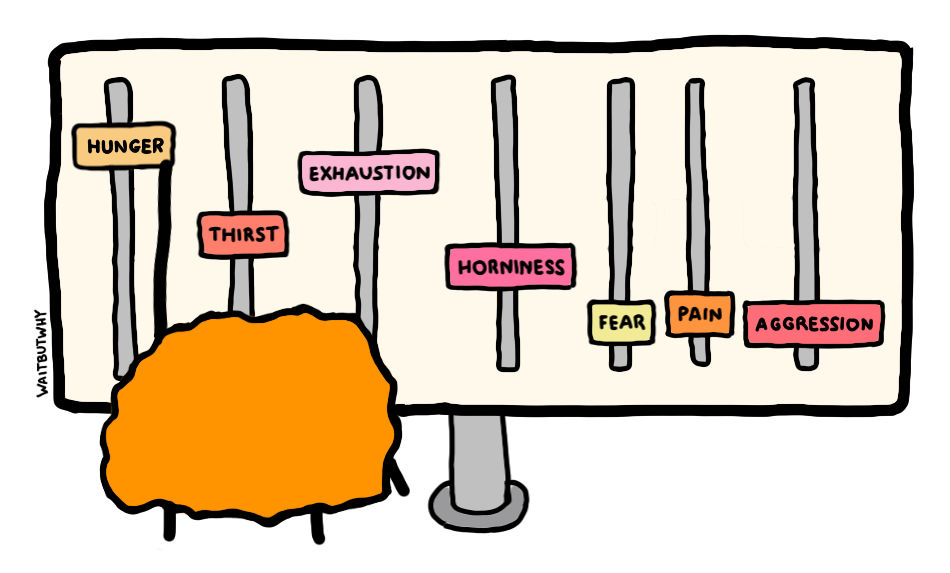 The genes need their animal to protect itself, so the software ratchets up the fear feeling when it senses danger and hits the animal with a physical pain punishment when it does something that damages itself. 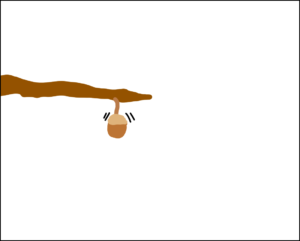 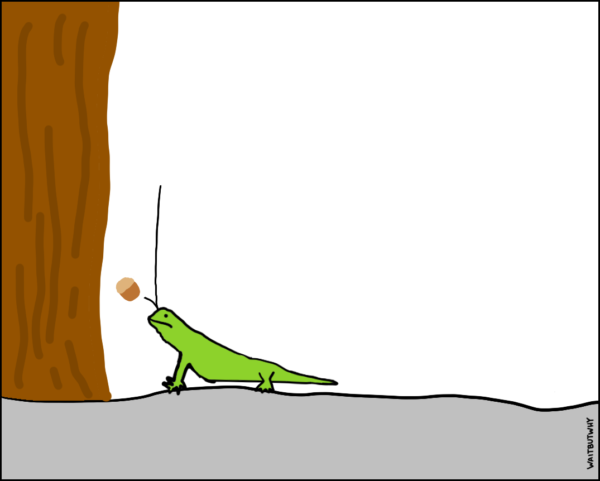 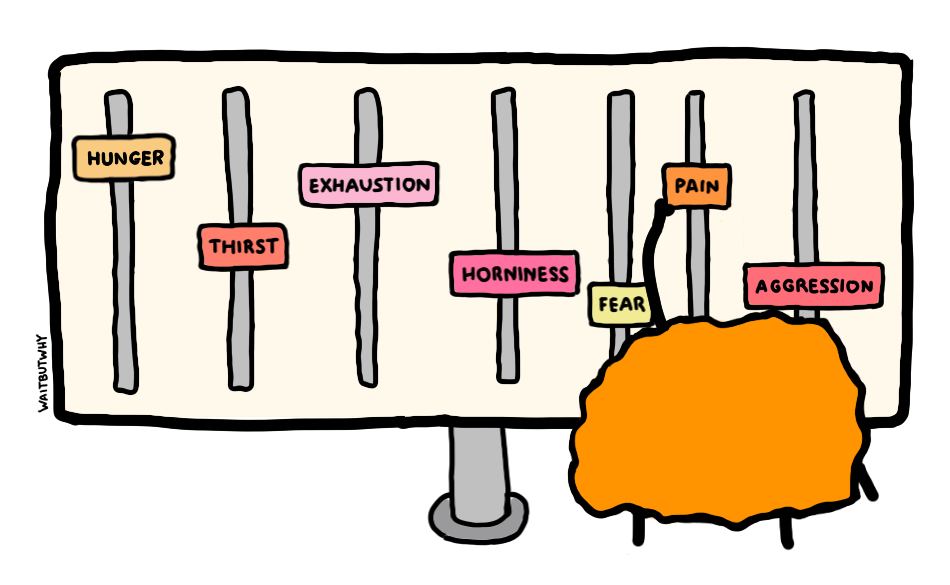 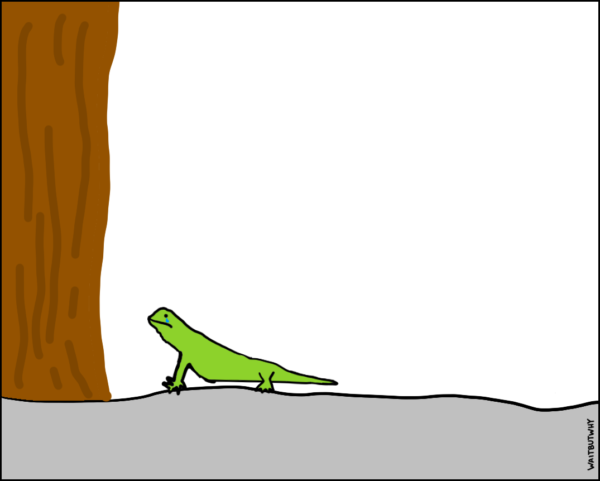 But genes value reproduction above all else, so whenever mating is a possibility, it’ll crank up the horniness high enough to override everything else. 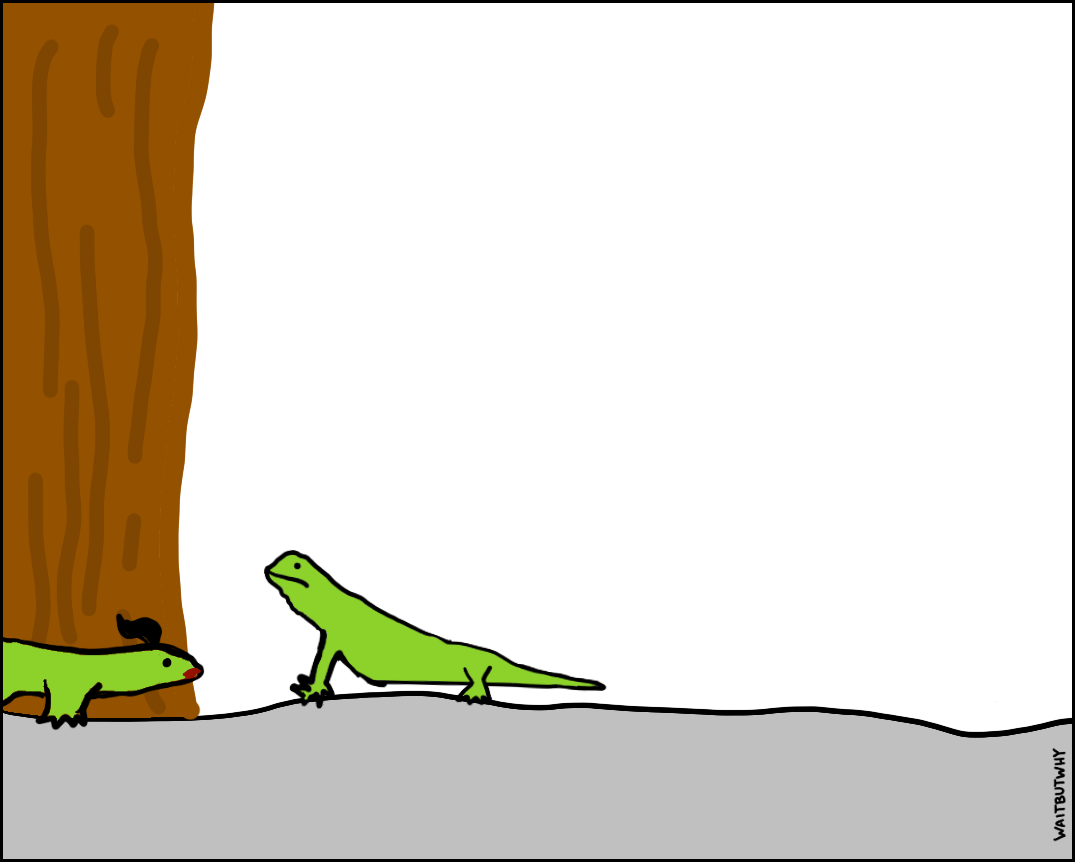 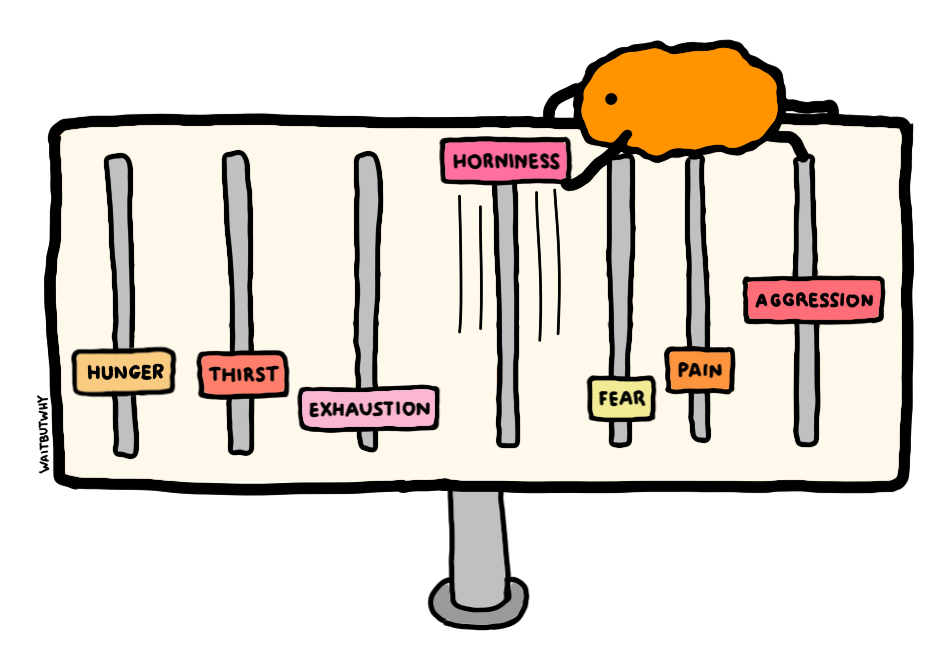 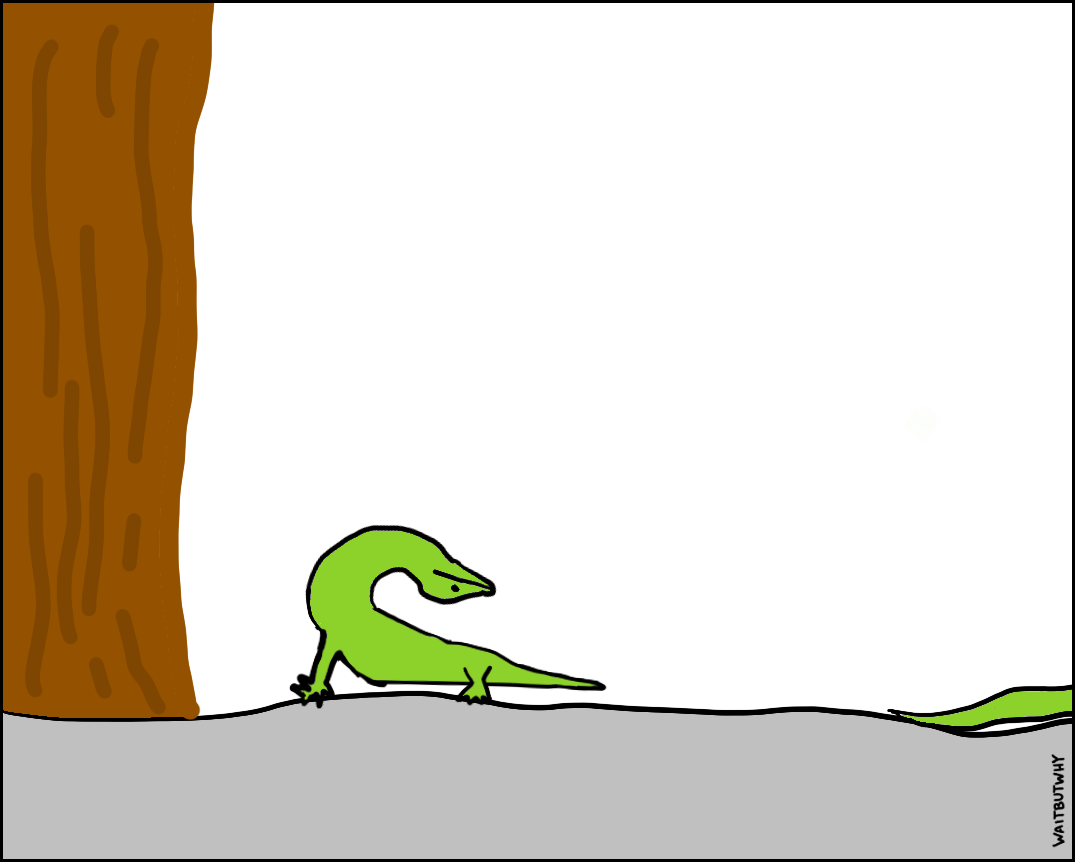 Life on Earth is a long succession of temporary animal containers passing genes along to newer containers like a baton in an endless relay. It’s an odd survival system, but so far, it’s worked pretty well—at least for those genes still around.

And that’s great for genes. But it’s stressful for animals.

The problem is that genes themselves aren’t alive, they’re just a force of nature—and forces of nature don’t give a shit about anything. Gravity wants to smoosh matter together, so that’s what it does. It has no concern for the well-being of the atoms it smooshes. If the hydrogen atoms in the center of the sun can’t handle the smooshing, they’ll fuse into helium atoms. Gravity doesn’t care. But the important thing is, atoms don’t care either. In the center of the sun, no one cares about anything, so everything’s fine. 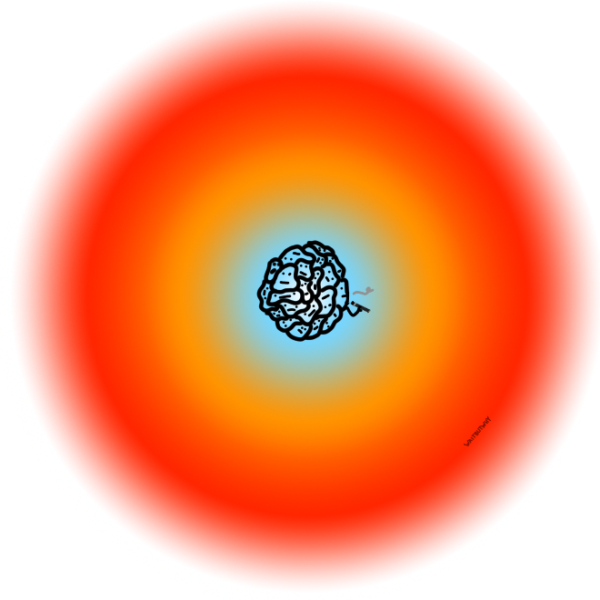 Genes are like gravity—they don’t care. They want to stay immortal, and they’ll pursue that goal as relentlessly as gravity fuses atoms inside stars. Just as there’s finite space in the center of a star, there are finite resources in the animal world—finite land, finite shelter, finite food, finite mates—which makes gene endeavors a zero-sum game. One species doing better almost always happens at the expense of other species doing worse. And just like gravity relentlessly smooshes, genes are relentlessly greedy—a successful species will grow and expand as far as it can until it exhausts its advantages.

When you have a relentless force consuming finite resources, something’s gotta give. In a star, atoms give, fusing into bigger atoms. In the animal world, animal species give, morphing into new, mutated species—or, more often, going extinct.

Mindless evolutionary innovation brought survival tricks like feelings and subjective experience and higher sentience into animals, which means animals are like atoms in the center of a star…if the atoms hated being smooshed.

To genes, animal suffering is simply a useful tool—so the animal world is full of suffering. Genes have no higher principles, so neither does the animal world—no such thing as rights, no concept of right or wrong, no concern with fairness. Animals woke up in the heat of a universe pressure cooker, playing an unwinnable game they never signed up for, and that’s all there is to it.

At least that’s all there was to it.

A few million years ago, the genes that inhabit a particular population of great ape started innovating in an unusual way, trying out an animal container upgrade that had never quite worked before: super-high intelligence. All previous genes had passed up extra high intelligence in their housing because it requires a ridiculous amount of energy to maintain. It’s like running a small business and considering whether to hire an employee with a rare skill set who will only work for $1,000,000 a year. Doesn’t matter how good the employee is—no one is worth a million a year to a cash-strapped small business. But these ape genes tried it anyway.

They evolved into a variety of hominid species, all of whom have since been discontinued, except one—a saucy one called homo sapiens. For them, the advancements in intelligence proved to be a major survival asset, so their cognitive capacity rapidly increased, developing into an array of shiny new tools that no animal had ever possessed before. Through an accident of evolution, humans had gained superpowers.

They had gained the superpower of reason, which gave humans the ability to solve complex problems, invent fancy new technologies, design sophisticated strategies, and make real-time adjustments to their thinking based on changes in their environment. 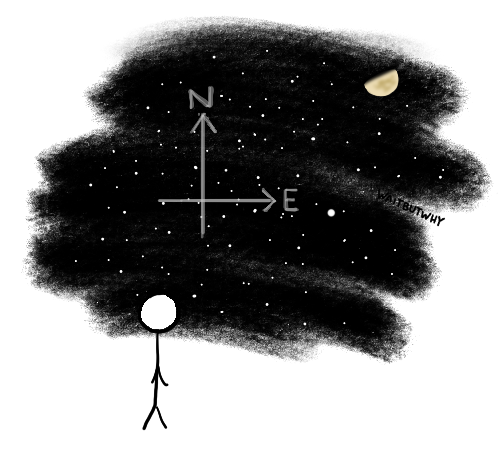 Reason sharpened human thinking, introducing nuance and logic into the process. It also affected human motivation—by illuminating the distinction between true and false, reason made truth a core human drive.

Humans had also gained the superpower of imagination, making them the world’s first animal that could fantasize and tell stories and dream of places they had never been. 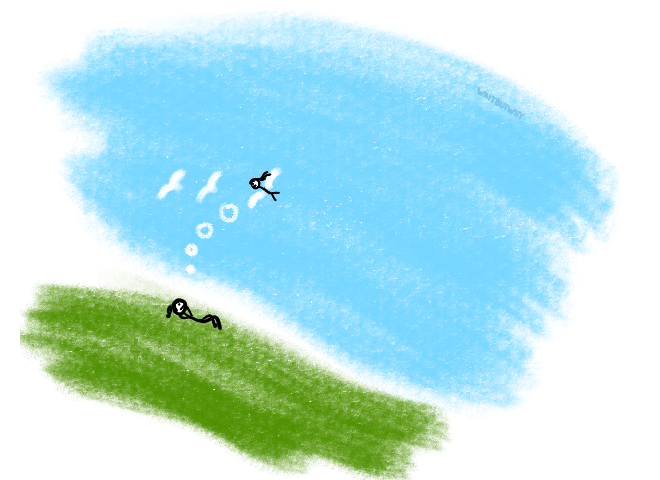 But the real power of imagination came when it was combined with communication. Humans now had the power to communicate with each other using a complex language full of sounds that represent things or ideas—human language is humans imagining together. Communication plus imagination is why humans can think in the big picture and make long-term plans in a way no other animal can. 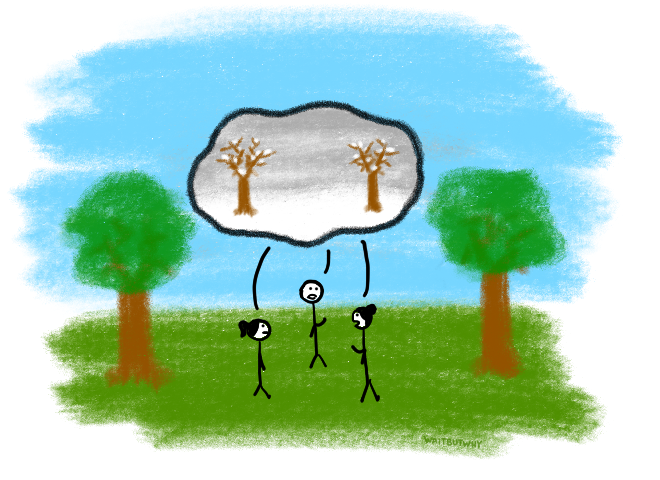 Reason and imagination, combined together, lead to something even more incredible. Without imagination, animals have a hard time wrapping their heads around the fact that animals other than themselves are full, living creatures who experience life just like they do. They can’t put themselves in another animal’s shoes. Without reason, animals can’t follow the logic that concludes that the lives of others are just as valuable as their own, and their pain and pleasure just as real.

These two superpowers produced a third superpower—one that, above all, makes humans human: empathy. 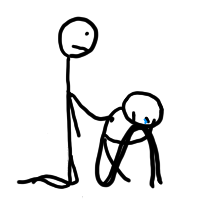 With the power of empathy came powers like compassion, guilt, pity. Even clueyness. Most significantly, with the groundbreaking epiphany that all animals have worth came the concept of right vs. wrong.

These superpowers took their place in the human mind as powerful new enhancements.

But none of that is the really weird part.

The craziest thing about the new human superpowers was their unexpected side effect. Each of the advanced capabilities was like a new stream of mental potential, and when combined together, it was as if they formed a glowing orb of light in the center of the human mind. 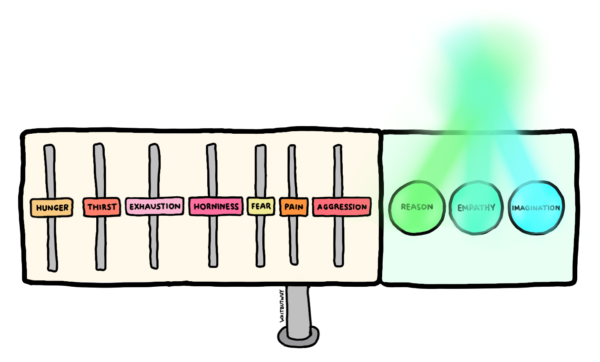 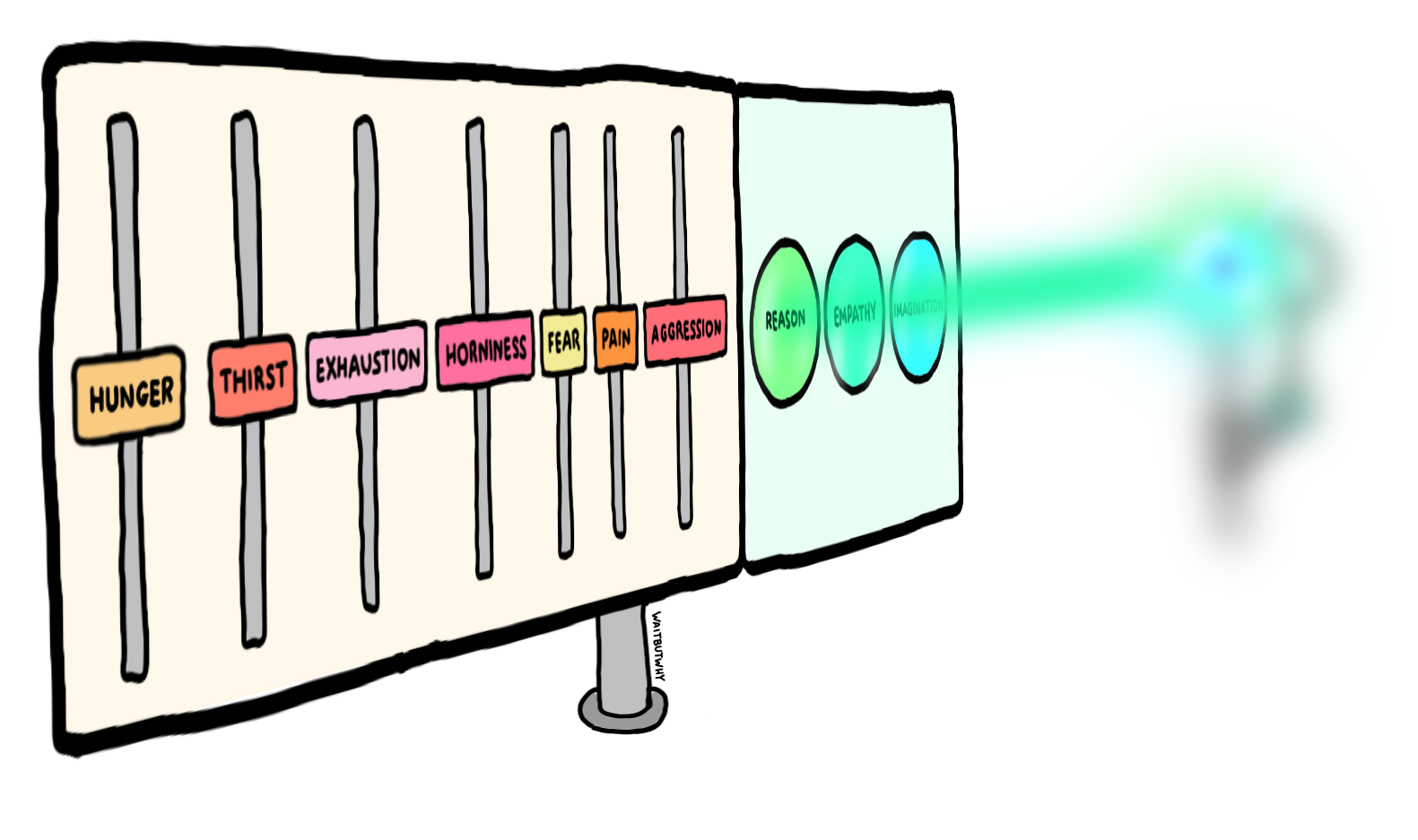 This light was so bright and so clear and so powerful that it was as if it had its own awareness—an awareness of itself, of the human it lived in, of the ancient software running beside it. The human brain had grown a mind of its own that could think for itself. 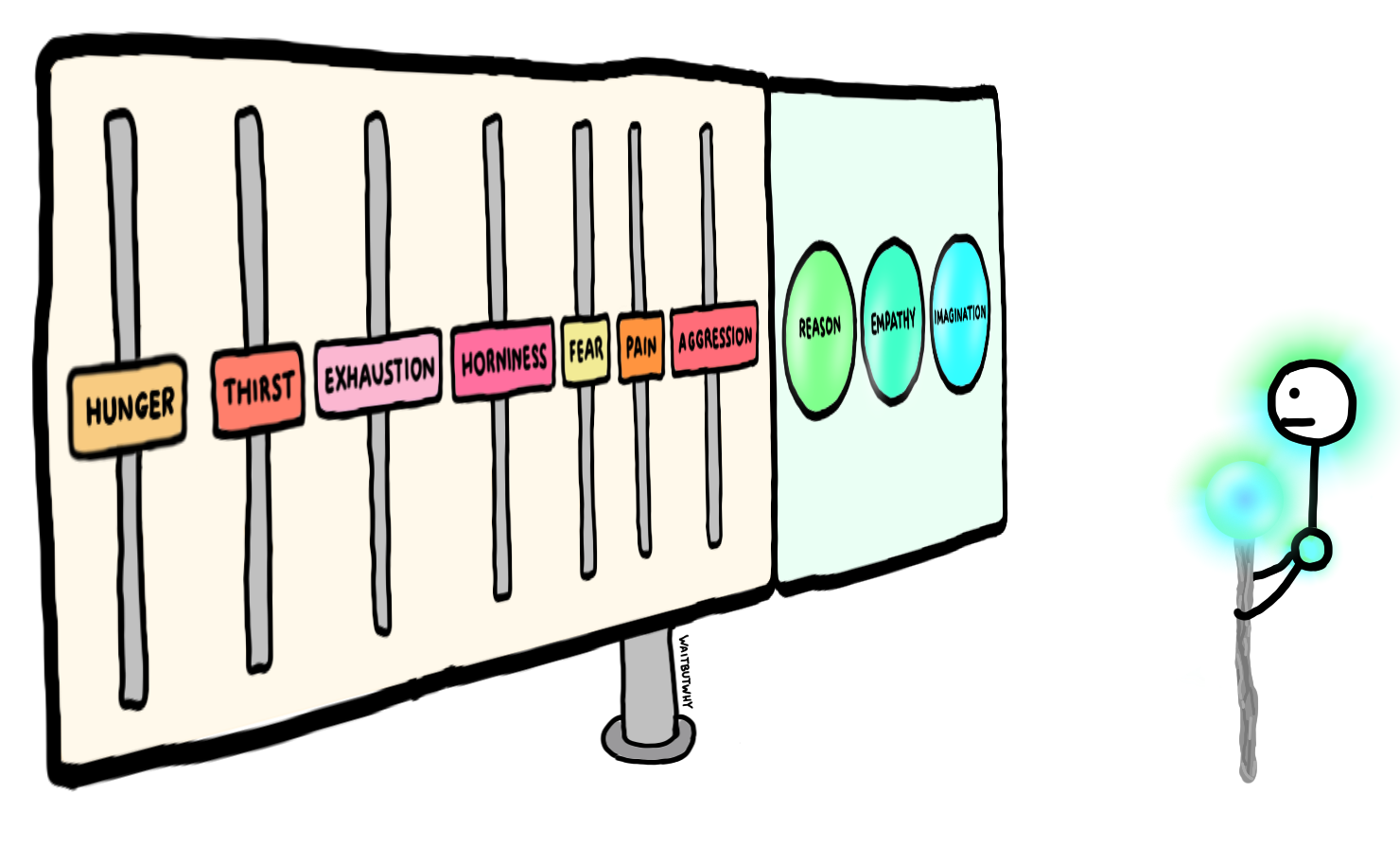 Up until this development, the early human mind was like all animal minds—powered by genetic will and run by ancient software, with one purpose only: genetic immortality. But this new mind was something different entirely—something running independently of the human’s survival software.

Not only could this mind within a mind think its own thoughts, it could actually overrule the will of the genes, override the software’s commands, and drive human behavior.

For the first time in early life history, an animal was more than just an animal—it was an animal plus…something else.

Let’s call our ancient animal software, which is still very much in our heads—our Primitive Mind. And let’s call this highly advanced, independent new consciousness our Higher Mind. 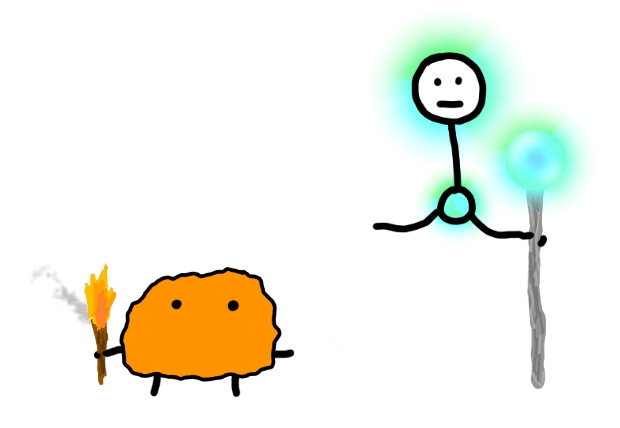 As any human you’ll talk to can attest, two minds in one animal is an odd situation. Especially since the two minds often don’t get along.

The Higher Mind spends most of his time on the right side of the control panel with the superpowers, absorbing their energy and feeding them with his consciousness.

When he thinks about it—and he does think about it, sometimes—he wonders whether this is all a mistake and he ended up in the wrong head. Because he can’t help but notice that next to him at all times is a hectic ball of orange fuzz that was living here when he moved in.

The Primitive Mind doesn’t care about you any more than gravity cares about atoms. It’s just a truck driver delivering precious cargo from one place to another—and you’re just the truck. The only concern it has with the truck is to keep it well fueled and out of accidents during this segment of the eternal voyage. The more prominent the Primitive Mind is in your head at any given time, the less you’re like an independent entity and the more you’re like a truck being driven by automated software.

The difficulty with two minds is that there’s only one brain—leaving the two minds in an ongoing power struggle. When the Higher Mind is empowered, his staff lights up the room with self-awareness, offering a clear view of the Primitive Mind in all its silliness, which makes it hard for the Primitive Mind to do anything sneaky. 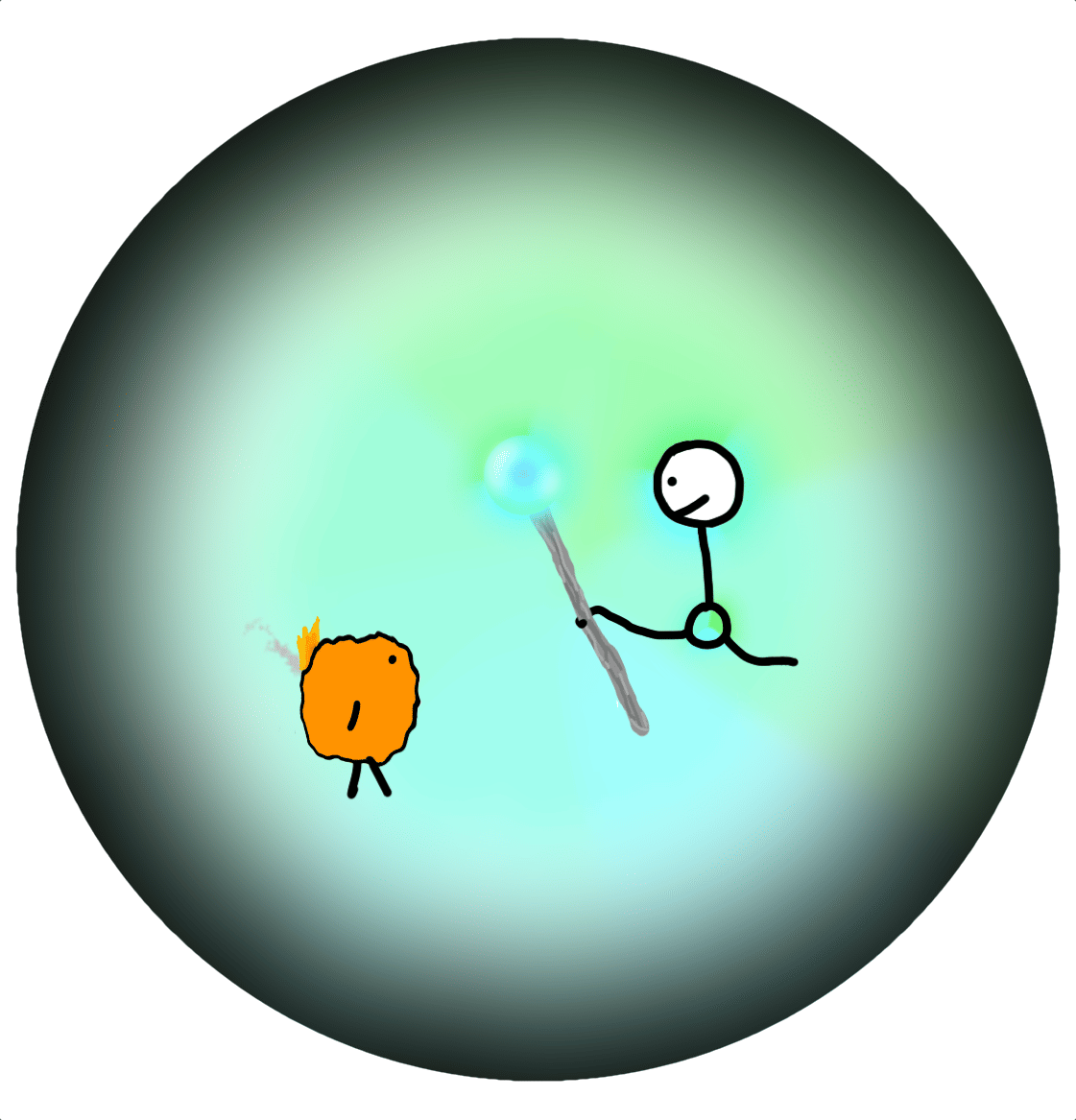 But when the tides turn, the Primitive Mind’s torch grows along with his influence, and the room gets increasingly smoky. The more smoke there is, the more it blocks the Higher Mind’s light, cutting off his access to his human and making it hard for him to do his job. 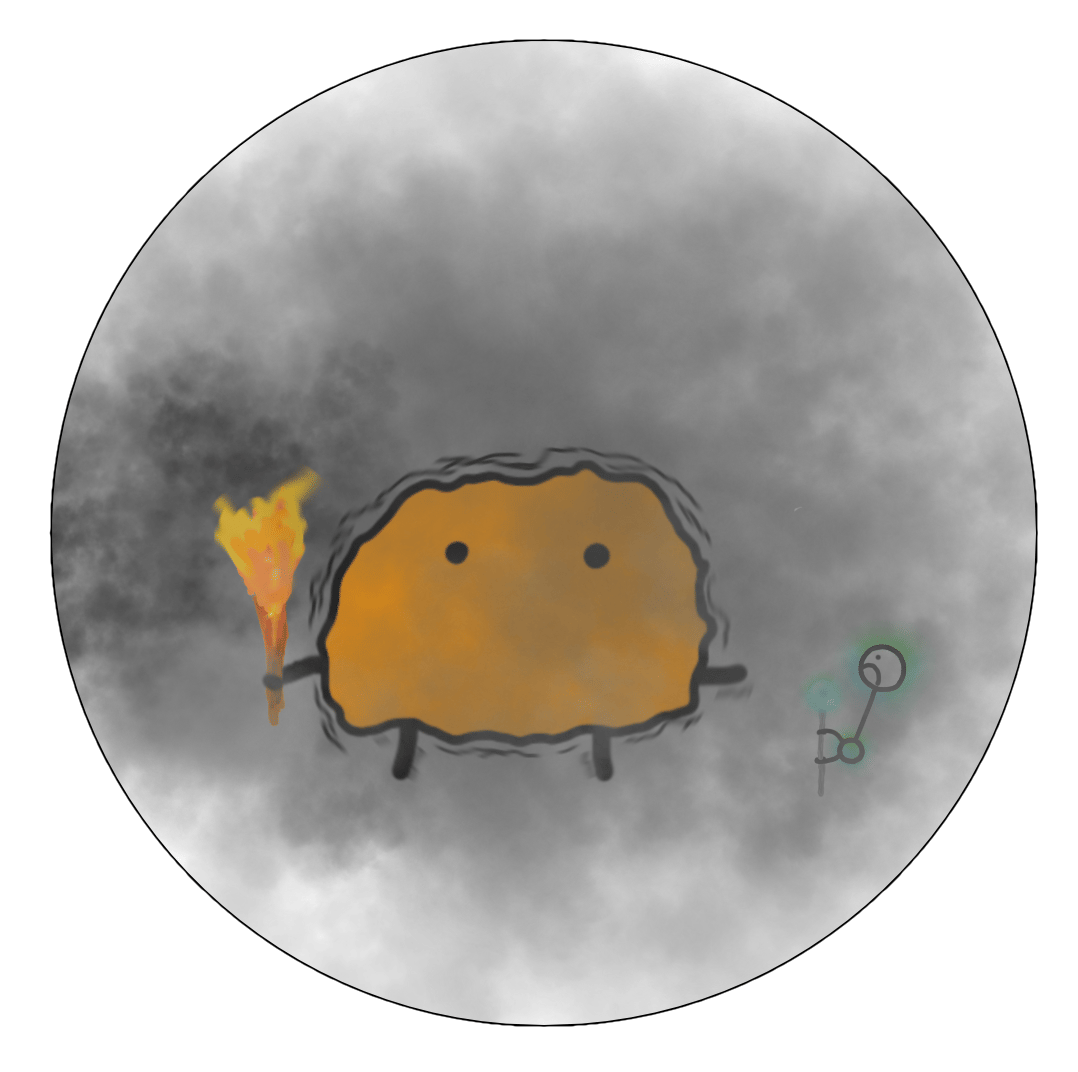 The human, with smoke obscuring its self-awareness, doesn’t realize its mind has been switched over to software automation, leaving the Higher Mind pretty helpless to take back the controls. This is when humans start trouble, for themselves and for others.

The never-ending struggle between these two minds is the human condition. It’s the backdrop of everything that has ever happened in the human world, and everything that happens today. It’s the story of our times because it’s the story of all human times. We’re gonna go to all kinds of places in this post series—and wherever we go, remember to remember the great battle of fire and light.

Chapter 2: A Game of Giants

To keep up with this series, sign up for the Wait But Why email list and we’ll send you the new posts right when they come out.

A huge thanks to our ridiculously generous (and patient) supporters on Patreon for making this series free for everyone. To support Wait But Why, visit our Patreon page.

Three Wait But Why posts about fire and light: