We made a fancy PDF of this post for printing and offline viewing. Buy it here.

In a post last year, we laid out the human lifespan visually. By years: 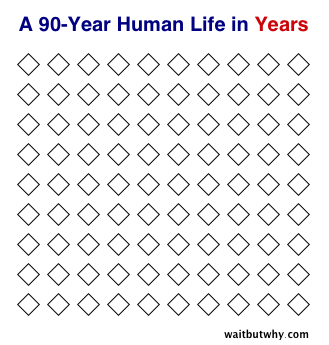 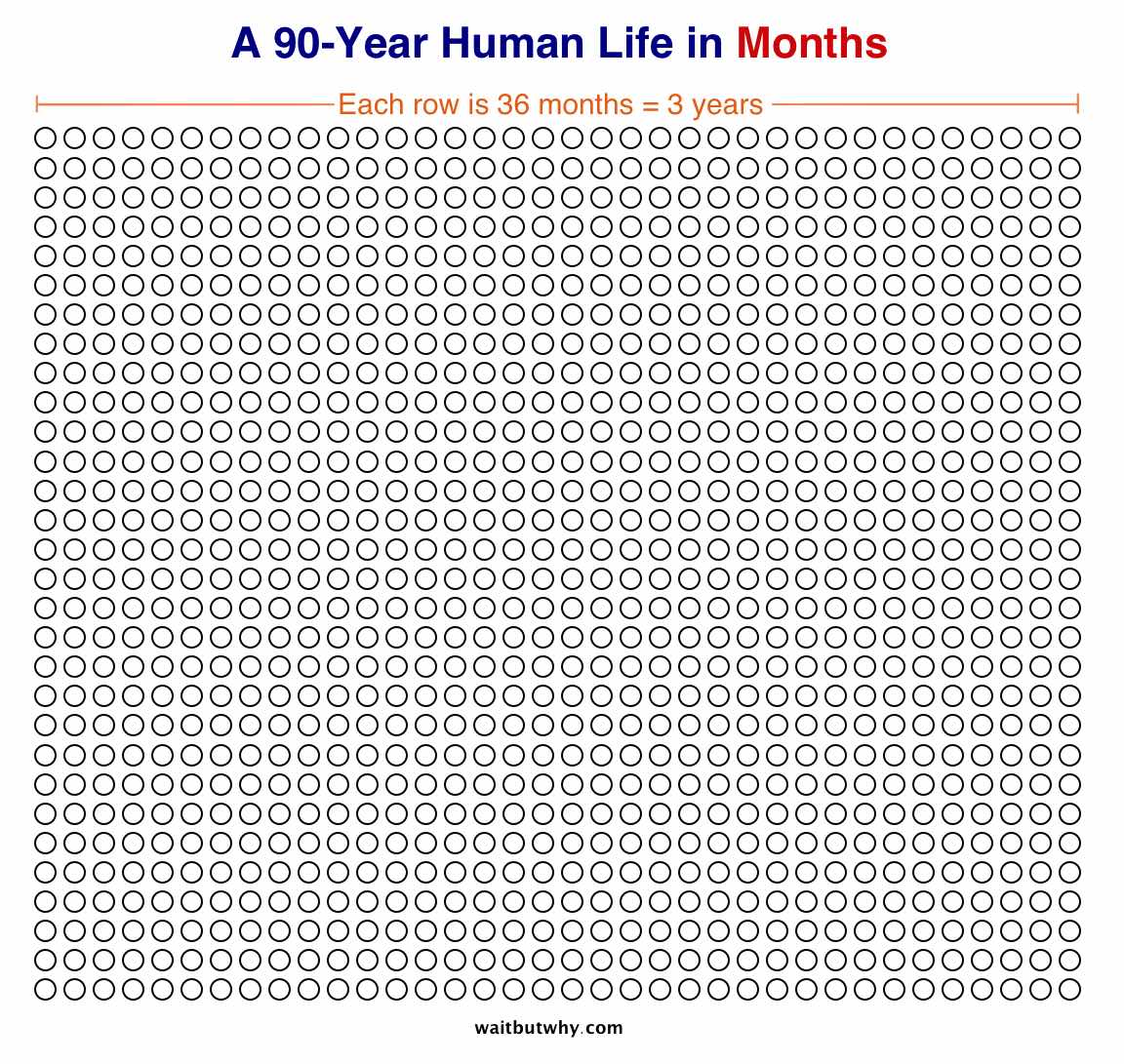 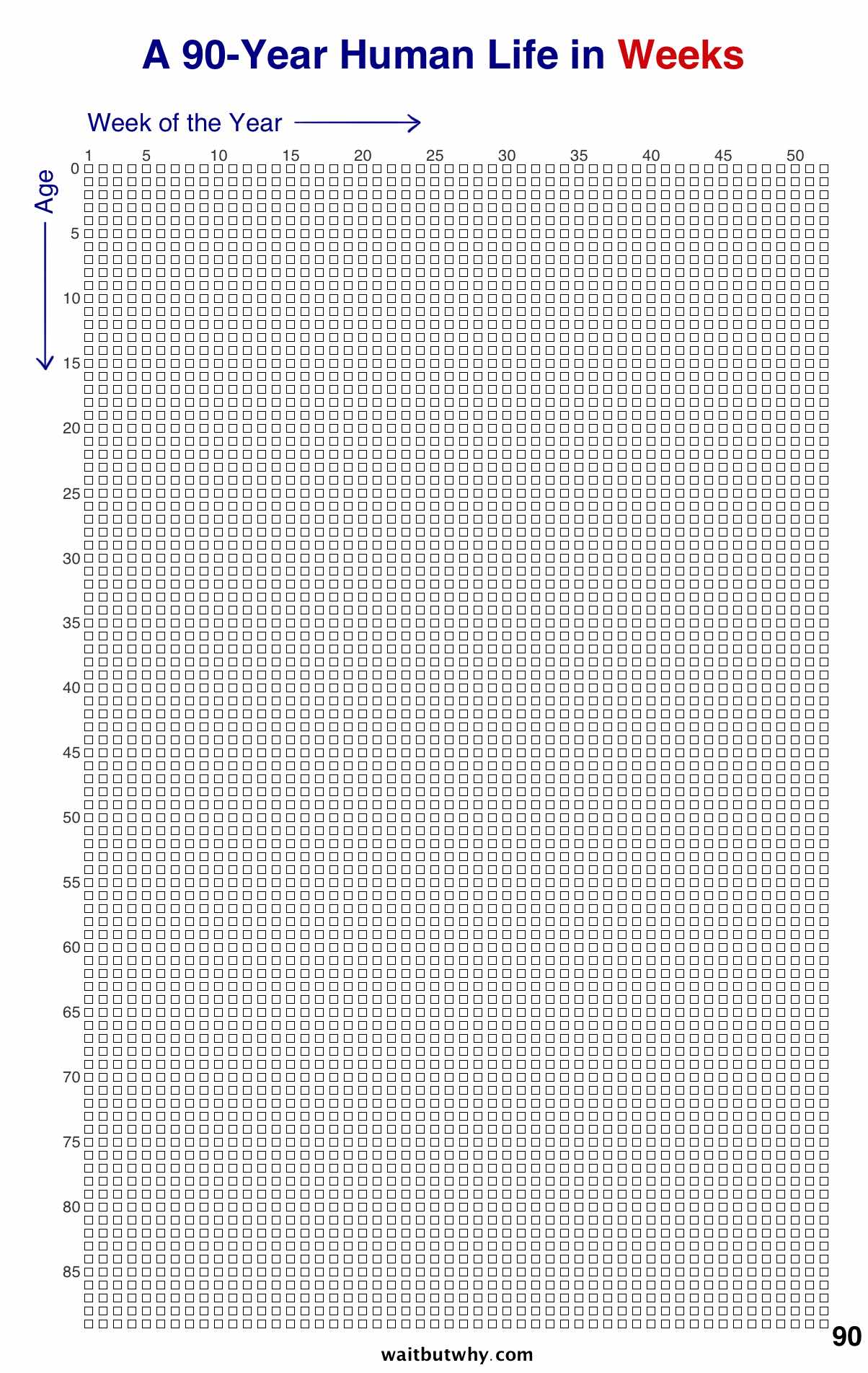 While working on that post, I also made a days chart, but it seemed a bit much, so I left it out. But fuck it. 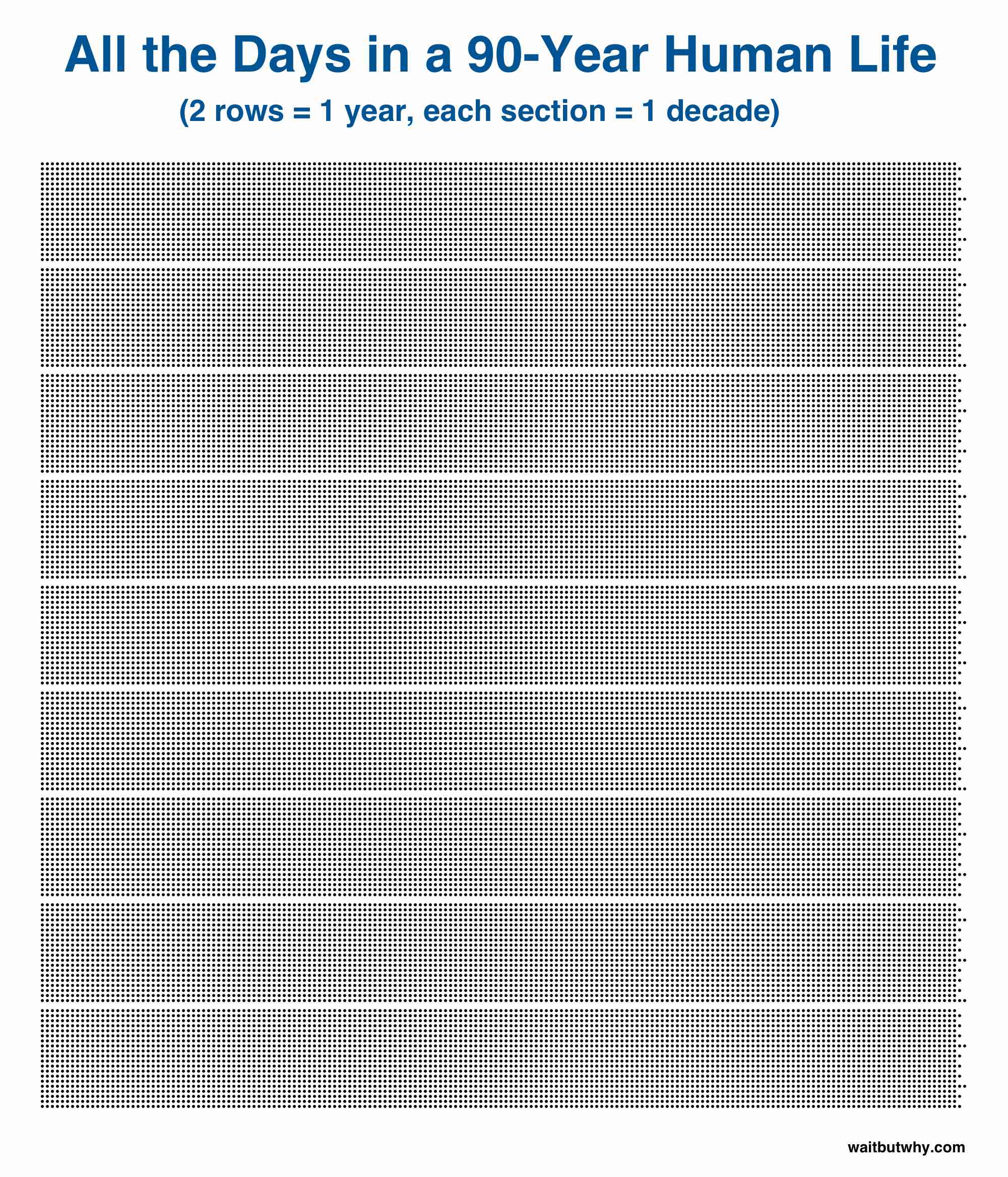 The days chart blows my mind as much as the weeks chart. Each of those dots is only a single Tuesday or Friday or Sunday, but even a lucky person who lives to 90 will have no problem fitting every day in their life on one sheet of paper.

But since doing the Life in Weeks post, I’ve been thinking about something else.

Instead of measuring your life in units of time, you can measure it in activities or events. To use myself as an example:

I’m 34, so let’s be super optimistic and say I’ll be hanging around drawing stick figures till I’m 90.1 If so, I have a little under 60 winters left: 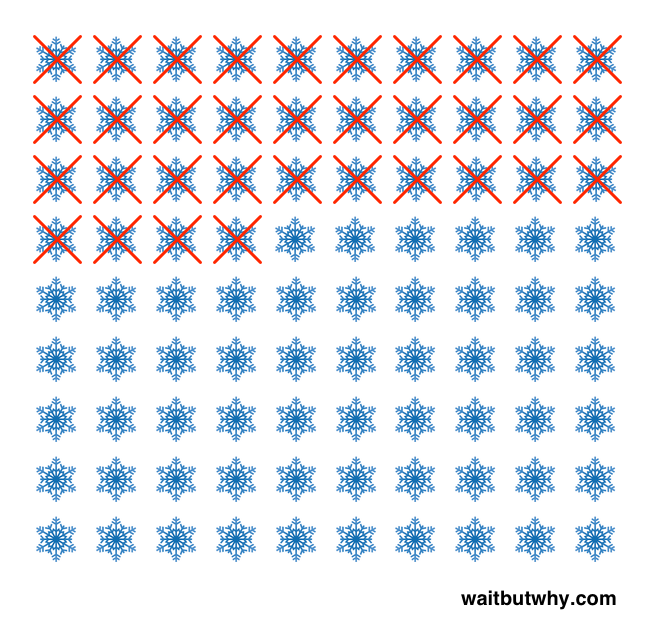 And maybe around 60 Superbowls left: 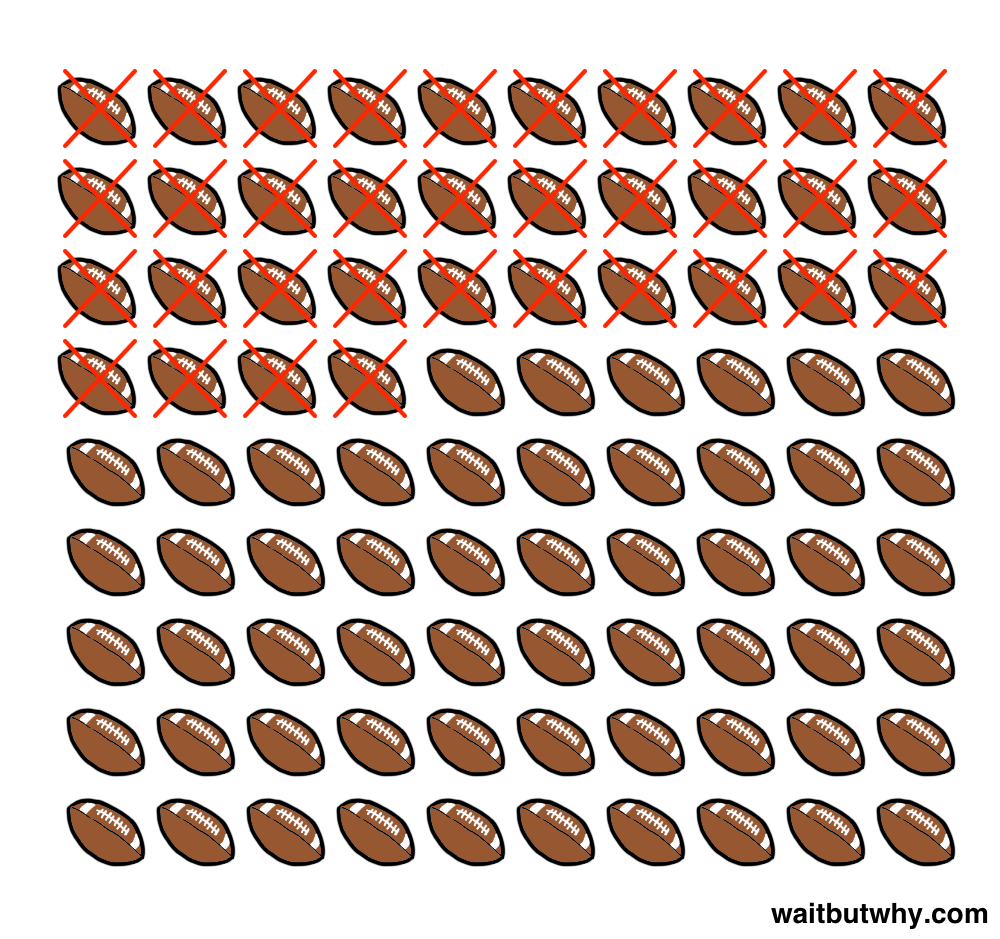 The ocean is freezing and putting my body into it is a bad life experience, so I tend to limit myself to around one ocean swim a year. So as weird as it seems, I might only go in the ocean 60 more times: 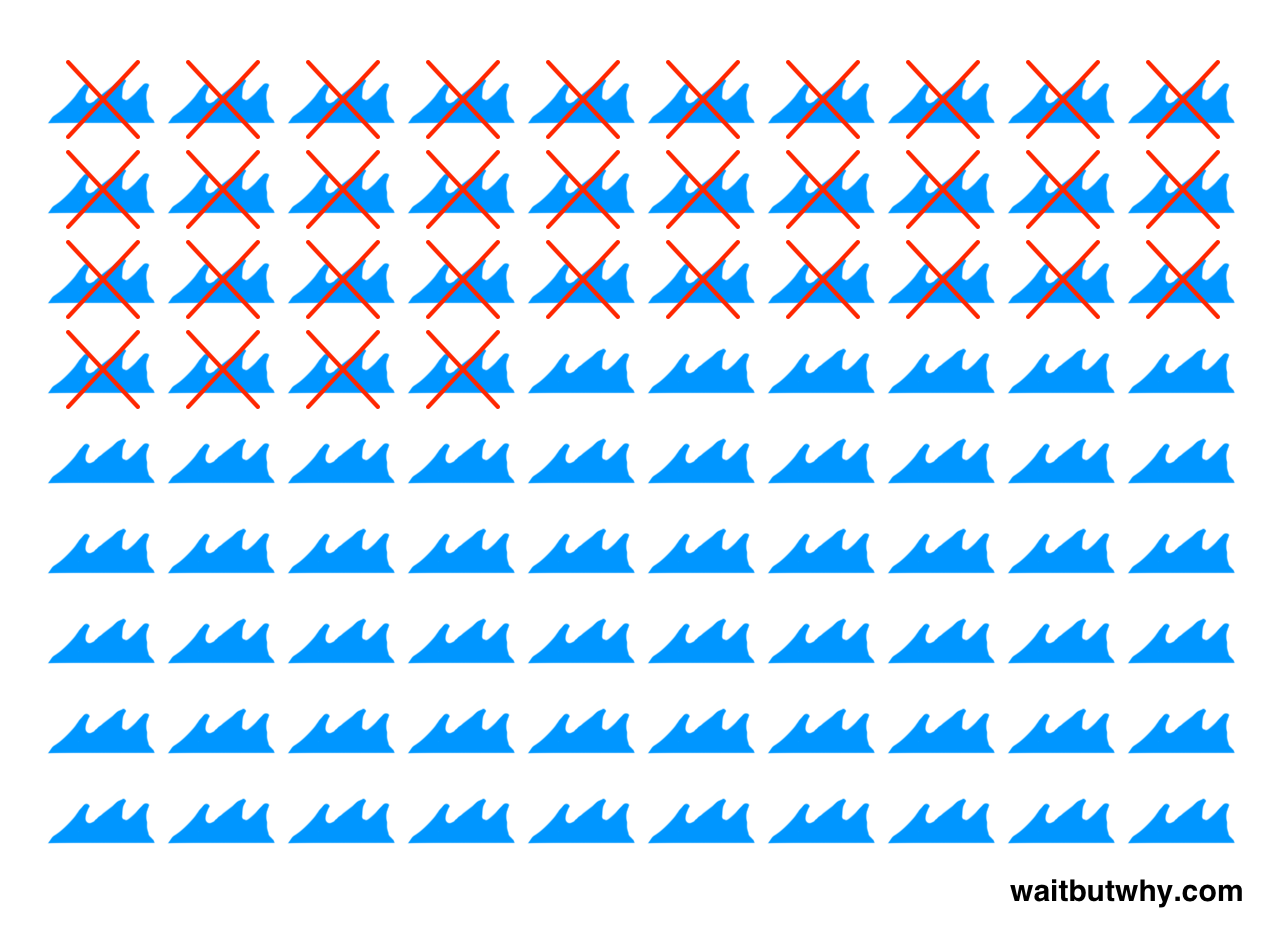 Not counting Wait But Why research, I read about five books a year, so even though it feels like I’ll read an endless number of books in the future, I actually have to choose only 300 of all the books out there to read and accept that I’ll sign off for eternity without knowing what goes on in all the rest. 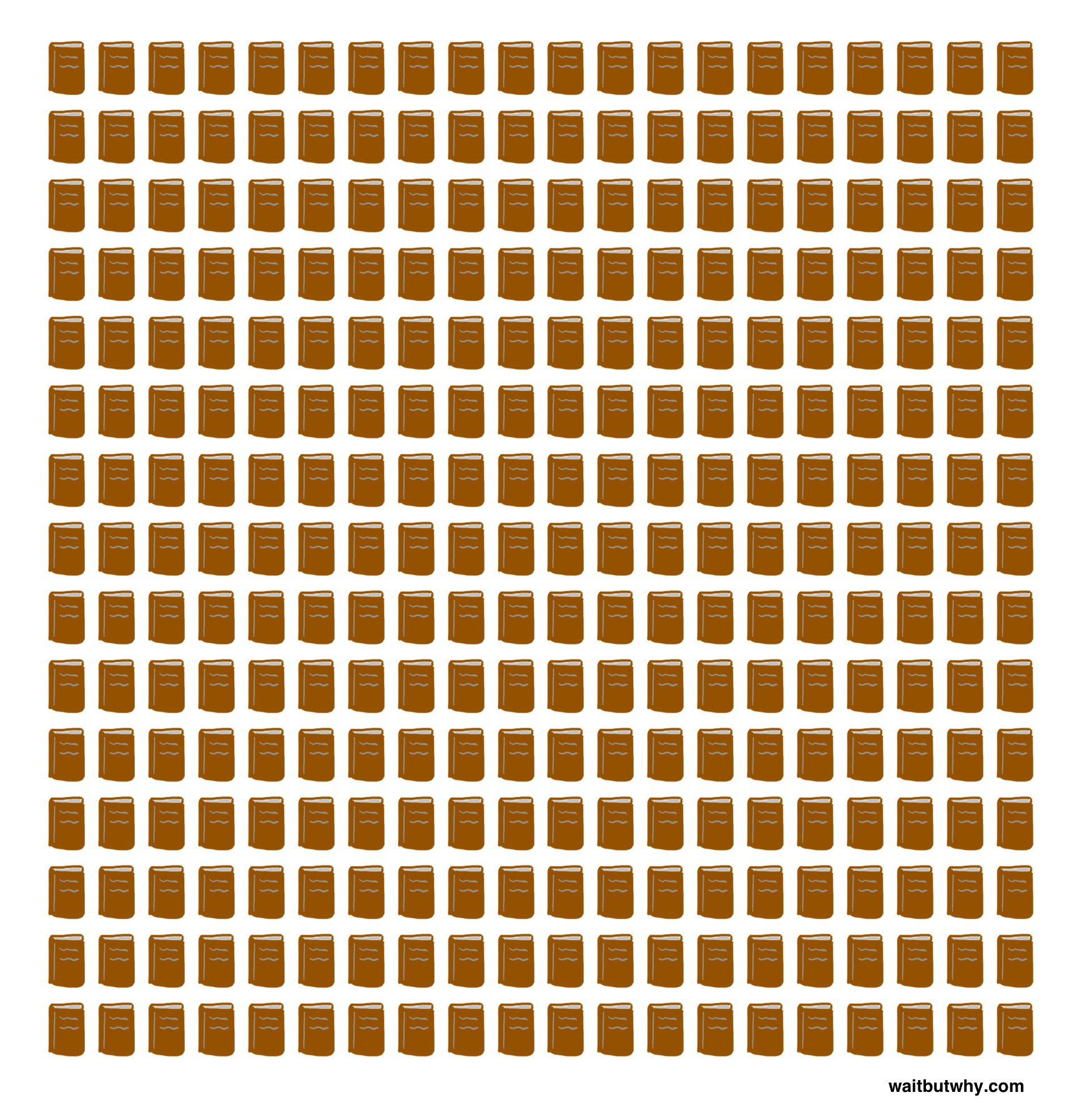 Growing up in Boston, I went to Red Sox games all the time, but if I never move back there, I’ll probably continue at my current rate of going to a Sox game about once every three years—meaning this little row of 20 represents my remaining Fenway visits:

There have been eight US presidential elections during my lifetime and about 15 to go. I’ve seen five presidents in office and if that rate continues, I’ll see about nine more.

I probably eat pizza about once a month, so I’ve got about 700 more chances to eat pizza. I have an even brighter future with dumplings. I have Chinese food about twice a month and I tend to make sure six dumplings occurs each time, so I have a fuckton of dumplings to look forward to:

What I’ve been thinking about is a really important part of life that, unlike all of these examples, isn’t spread out evenly through time—something whose [already done / still to come] ratio doesn’t at all align with how far I am through life:

I’ve been thinking about my parents, who are in their mid-60s. During my first 18 years, I spent some time with my parents during at least 90% of my days. But since heading off to college and then later moving out of Boston, I’ve probably seen them an average of only five times a year each, for an average of maybe two days each time. 10 days a year. About 3% of the days I spent with them each year of my childhood.

Being in their mid-60s, let’s continue to be super optimistic and say I’m one of the incredibly lucky people to have both parents alive into my 60s. That would give us about 30 more years of coexistence. If the ten days a year thing holds, that’s 300 days left to hang with mom and dad. Less time than I spent with them in any one of my 18 childhood years.

When you look at that reality, you realize that despite not being at the end of your life, you may very well be nearing the end of your time with some of the most important people in your life. If I lay out the total days I’ll ever spend with each of my parents—assuming I’m as lucky as can be—this becomes starkly clear:

It turns out that when I graduated from high school, I had already used up 93% of my in-person parent time. I’m now enjoying the last 5% of that time. We’re in the tail end.

It’s a similar story with my two sisters. After living in a house with them for 10 and 13 years respectively, I now live across the country from both of them and spend maybe 15 days with each of them a year. Hopefully, that leaves us with about 15% of our total hangout time left.

The same often goes for old friends. In high school, I sat around playing hearts with the same four guys about five days a week. In four years, we probably racked up 700 group hangouts. Now, scattered around the country with totally different lives and schedules, the five of us are in the same room at the same time probably 10 days each decade. The group is in its final 7%.

So what do we do with this information?

Setting aside my secret hope that technological advances will let me live to 700, I see three takeaways here:

2) Priorities matter. Your remaining face time with any person depends largely on where that person falls on your list of life priorities. Make sure this list is set by you—not by unconscious inertia.

3) Quality time matters. If you’re in your last 10% of time with someone you love, keep that fact in the front of your mind when you’re with them and treat that time as what it actually is: precious.

You can buy a PDF of this post here.

More things to reflect on:

Life is a Picture, But You Live in a Pixel. So obvious, so hard to remember.

Religion for the Nonreligious. Everyone needs a growth framework.