Look. I don’t know what you’re over there thinking about. It could be simple or sophisticated, mundane or whimsical, practical or creepy.

But I’m over here thinking about numbers. Again.

I’ve never been especially impressed by words. They’re mushy and sometimes pleasant and sometimes annoying. They’re subtle and subjective and rambly and flowy. Words are okay. Whatever.

So I’ve decided to do not one, but two consecutive posts on numbers, during which we’ll start at 1 and end up in a very scary place. Today, we’ll keep things in the realm of the ordinary and the conceivable, capping ourselves at a million.

Let’s start at the beginning—

We’ll lead off with the extraordinarily dull 1.

1 likes to masquerade as this poetic and profound thing, getting used in sentences I don’t really understand, like “the oneness of all” or something annoying like that. But then anytime you actually spend time with 1, you end up bored.

1 is also no fun to play with. Multiplying or dividing things by it is an incredibly underwhelming experience, and it manages to be such a dud that somehow, it’s not a prime number even though it only has one factor.

12 has the dozen thing going which is something, as well as factors up the dick. It’s also the number of people who have been on the moon. 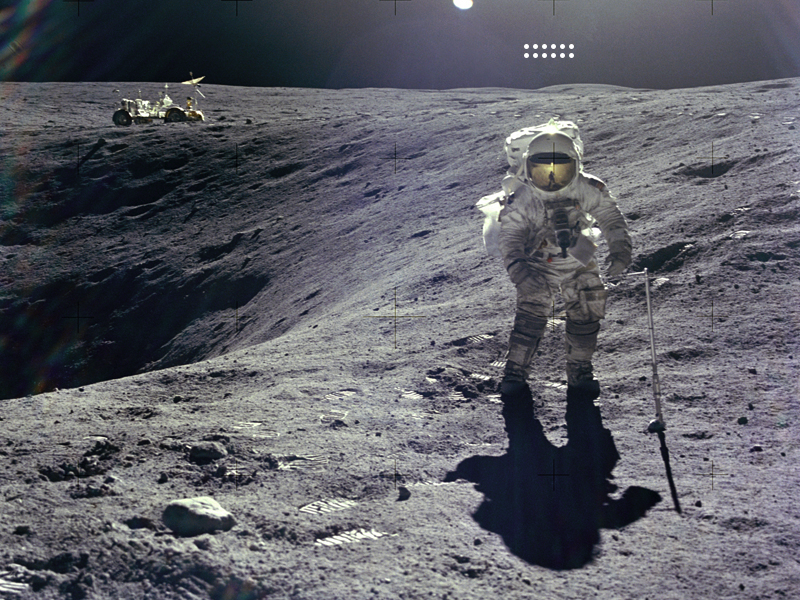 Let’s pause for a second to acknowledge how ridiculously impressive it is that humans got humans onto the moon and safely back. And how lucky are those 12 guys? Could any life experience be more desirable than getting to bounce around the moon while looking at the Earth hovering out there in space?

Continuing along, I don’t know whose sister 13 slept with, but somewhere along the way it pissed off the wrong person and managed to become the only number with a legitimately bad reputation.

20’s worth mentioning just because I read during my research that only about 1 in 20 men in the US is 6’2″ or taller. So if you’re 6’2″ or taller, you’re the tallest of this average sampling of 20 American men—4 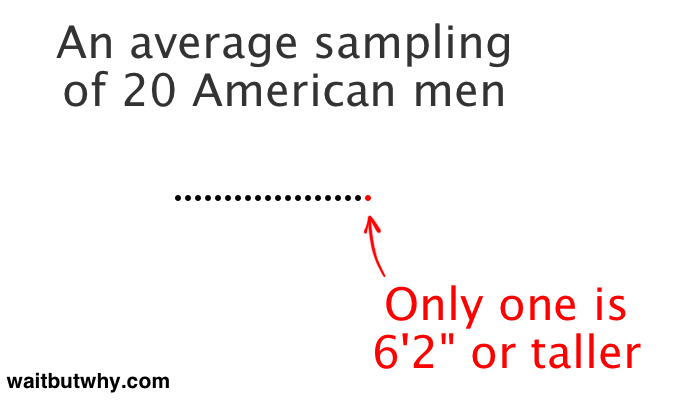 33 is relevant because of Larry Bird and because that’s what I turned on Wednesday thanks for wishing me a happy birthday none of you.

You might be surprised to know that only 1/43 Americans openly identifies as gay, lesbian, or bisexual, but that when asked in an anonymous and veiled survey, that number jumps to 8/43:

There are 41 Disney princesses and 48 real-life princesses, none of whom is Kate Middleton. 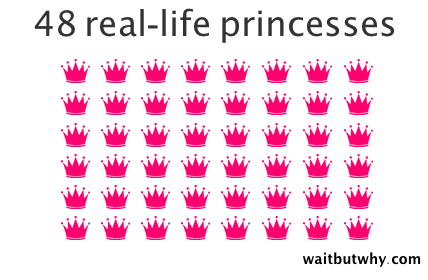 Not much else happening with the two-digit numbers until we arrive at sleazy 99, the price tag whore who’s made its whole living being the guy next to 100.

100 is a big deal and clearly knows it, but that’s fair. It’s the first three-digit number, but in our world, 100’s main role is being the overlord of the one and two-digit groups—it’s a century of years, the official “okay you win” age to reach, and the whole concept of percent is just comparing a part of 100 to all of 100. 100 is also a perfect square of another one of these fundamental numbers (i.e. 10, 100, 1,000, etc.), which is satisfying.

Being in the top 100th of a group in some way is also a thing. It looks like this:

After 100, we’re about to get into superbly random number territory, but first we hit 101, a C-list number celebrity for a handful of small claims to fame, like 101 Dalmations and beginner courses and the West Coast US highway.

Continuing along, while about exactly 1 out of every 100 dots speaks sign language (70 million people worldwide),6 1 of every 179 living humans (39 million) is blind: 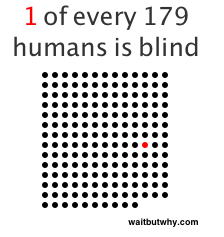 There are 444 Apple retail stores in the world: 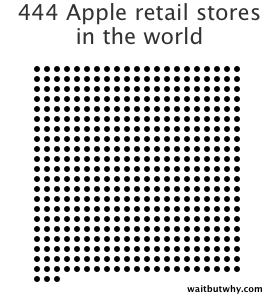 If you deal five cards 508 times, you’ll average one flush: 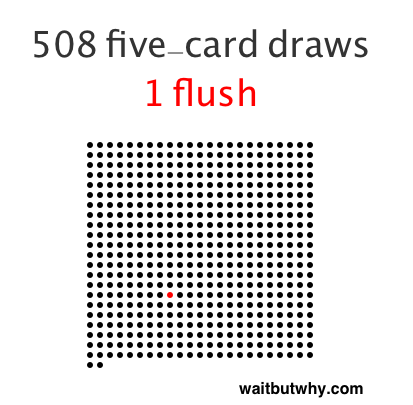 And there are 12 million US dollar millionaires in the world, or 1 out of every 583 people. If your total assets (in excess of your total liabilities) add up to over $1,000,000, you’re the red dot in this diagram: 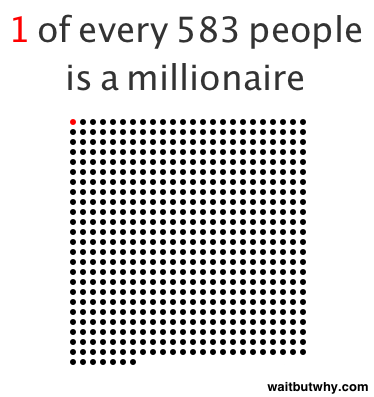 1,000 is also a huge deal in our world and has a bunch of nicknames, like a grand, a G, a kilo, and k. It’s also part of the elite chain of numbers in the “order-of-magnitude” chain, which we know as million, billion, trillion, etc. Million is actually the third number in that chain, with the dud 1 as the first number and 1,000 as the second number. And 1,000 is the key multiplier that defines the whole chain.

Anyway, let’s look at some four-digit numbers and odds:

Here’s how many times a neutron star spins around every second: 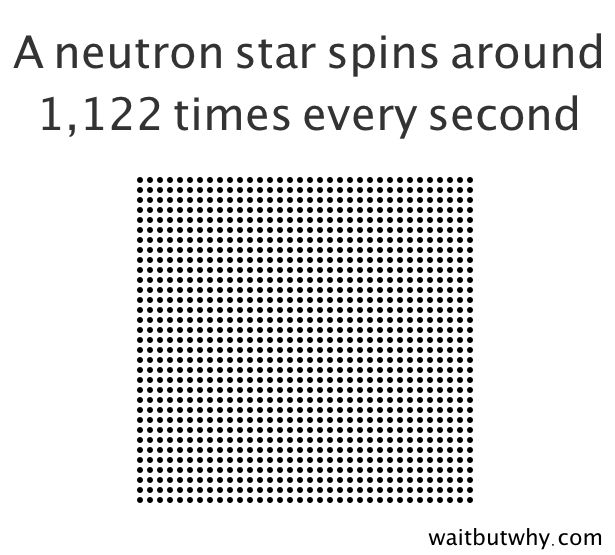 And here’s how many minutes there are in each day: 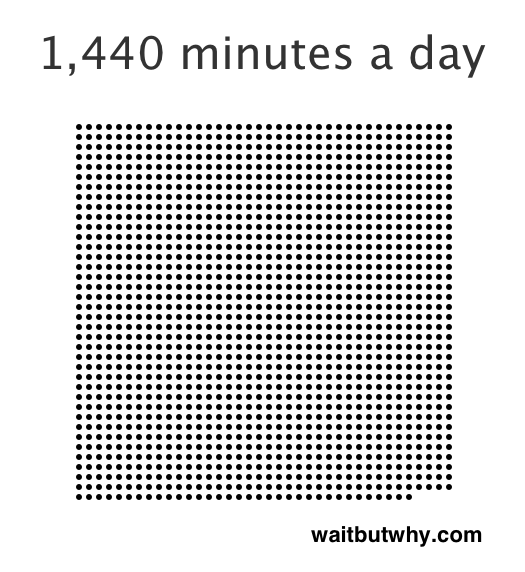 A genius-level IQ of 150 will earn you red dot status on the thousand-dot intelligence diagram, but that doesn’t mean you got a perfect 1600 on the SAT—only the red dot in a 1,489-dot sample aces the SAT:

There are 1,811 large US corporations (over 10,000 employees), and astronomers have identified 1,849 planets outside our solar system: 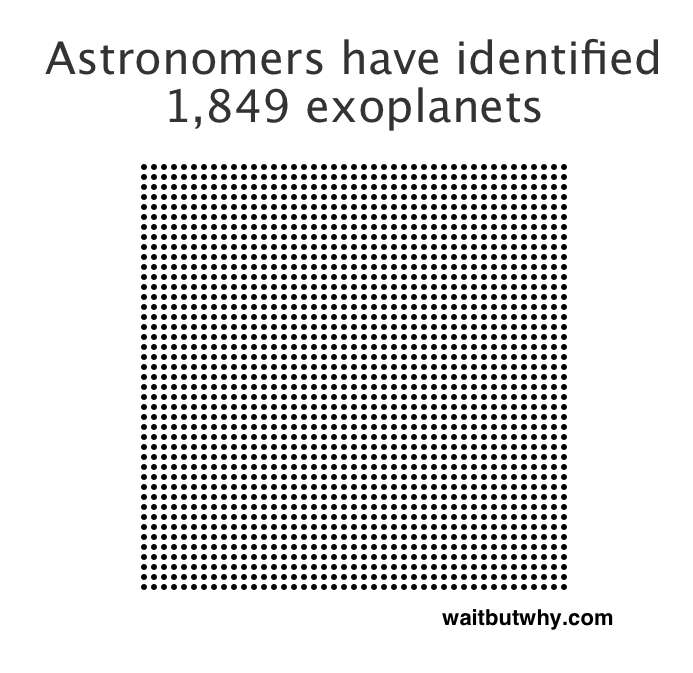 On a perfectly clear night, we can see about 2,500 stars in the night sky: 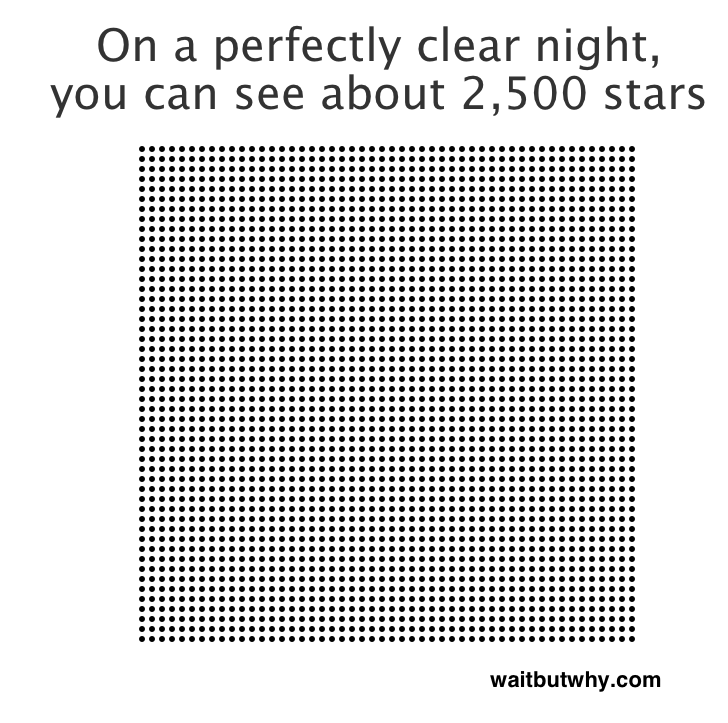 Here are all the seconds in an hour: 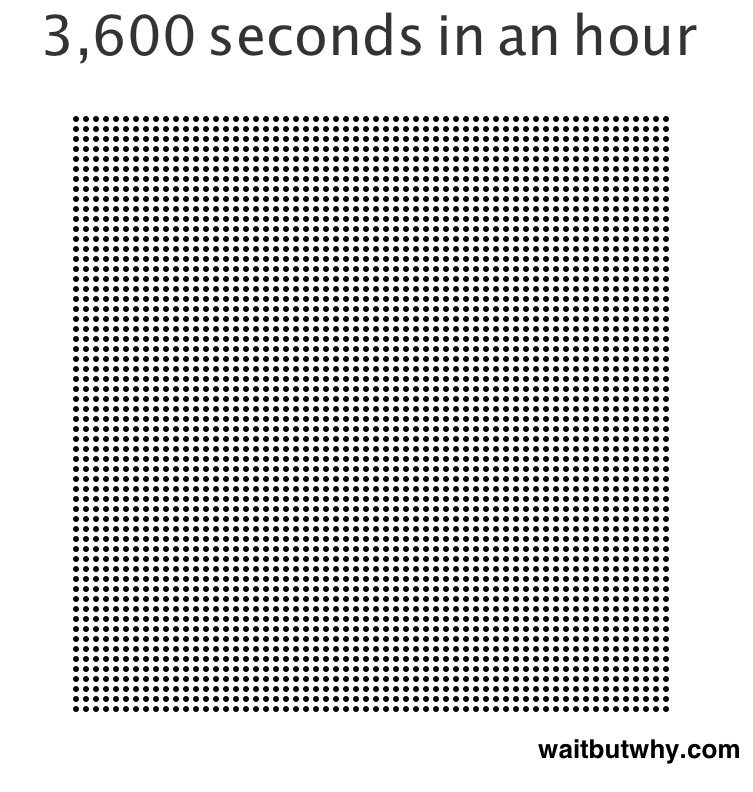 And here’s the number of religions in the world: 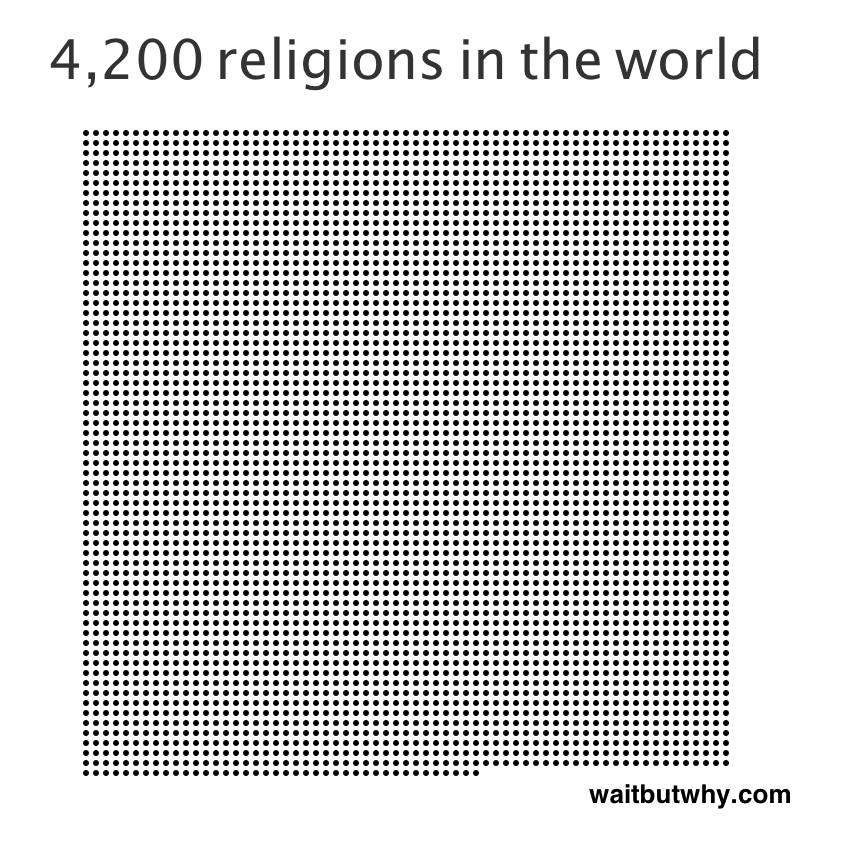 So there are more religions than the stars we see in the night sky, and you could name a religion every second and it would take you over an hour to name them all.

And here’s how many living languages there are in the world: 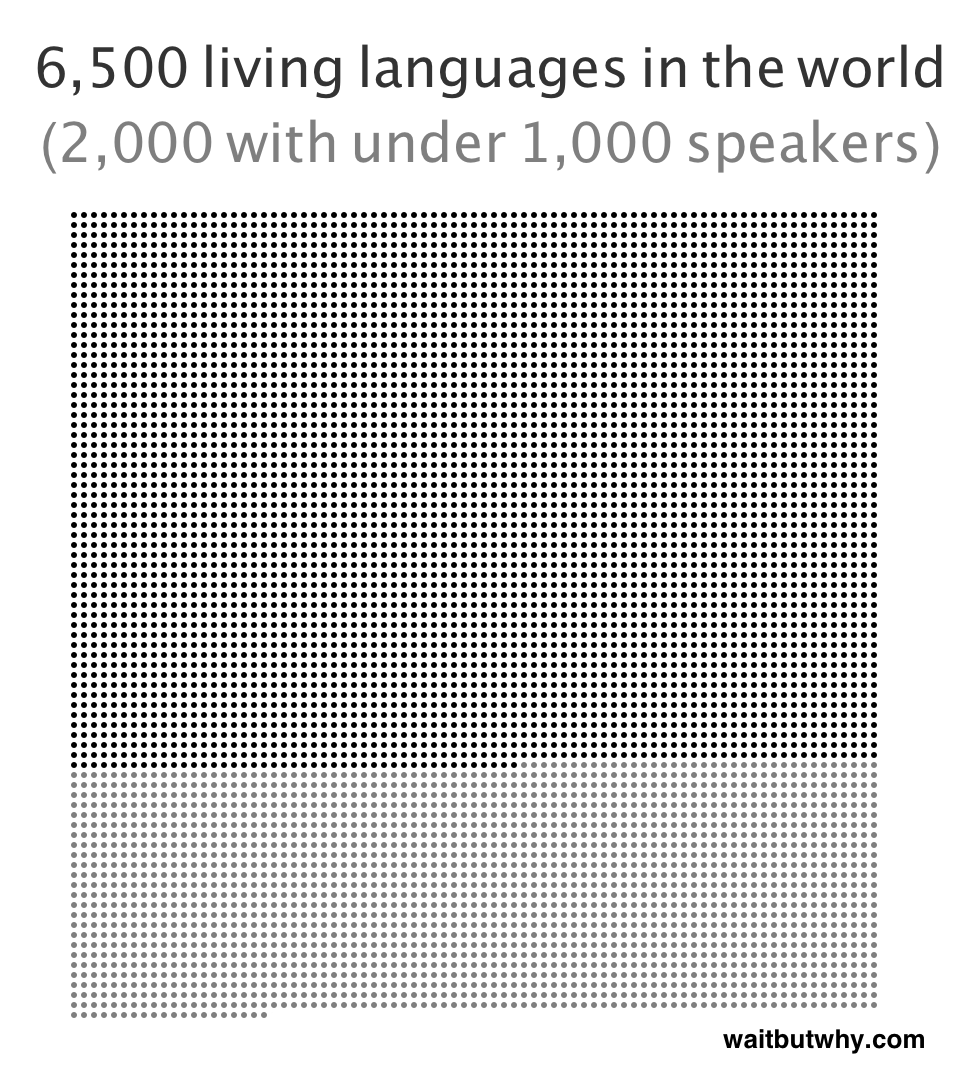 Finally, this is how many medium-sized (.5mm in diameter) grains of sand you could fit in a cubic centimeter box: 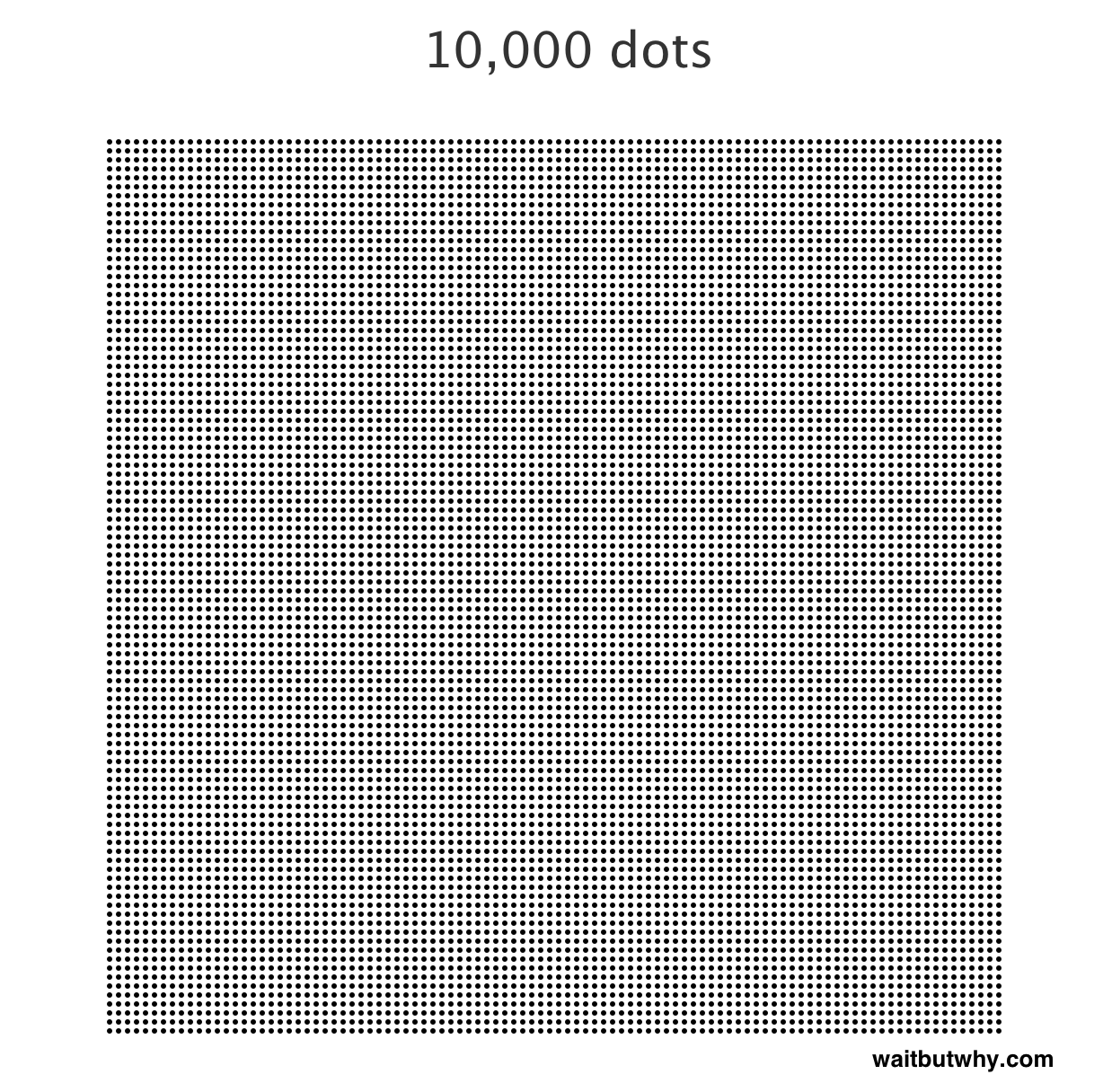 Stephen Hawking’s IQ is supposedly 160, which would just qualify him to be the red dot in a 10,000 dot average sample of human intelligence. And just so you know, in an average group of 17,000 people, one will be an albino.

This is how many people fit in a sold-out Fenway Park: 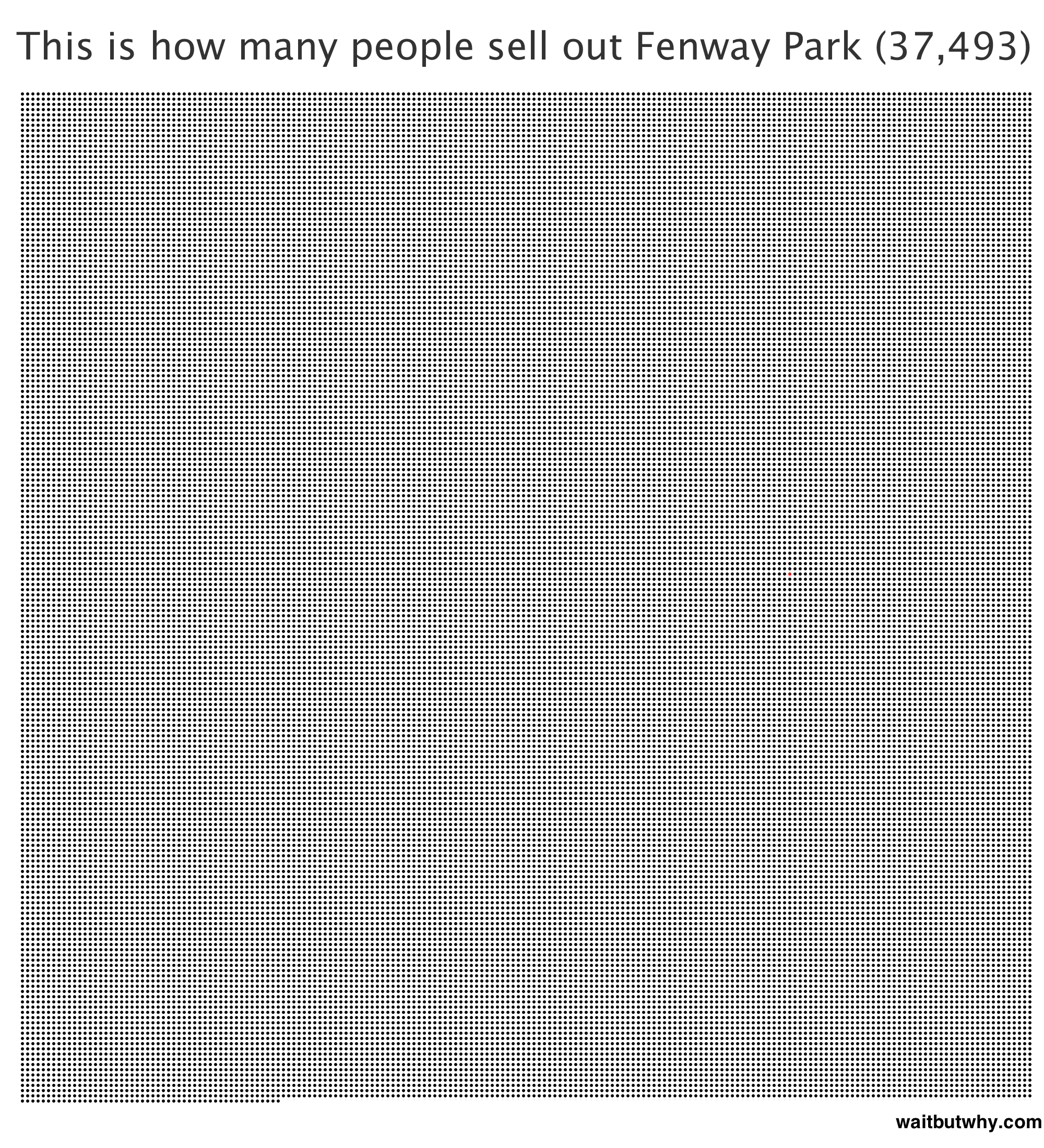 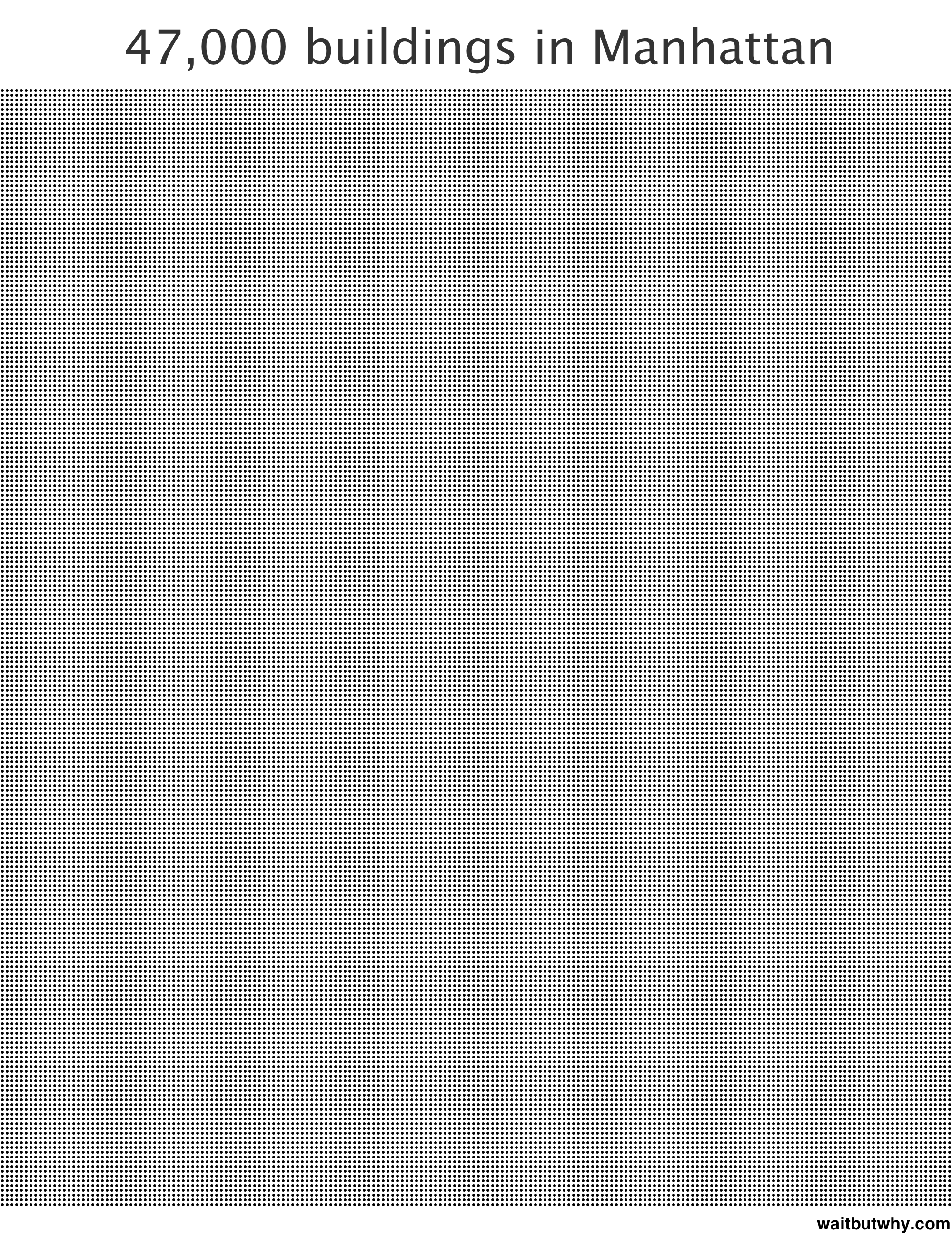 The 55,030 Google employees would fill up a large stadium, as would Apple’s 50,250. Facebook is considerably smaller, with a staff of 8,348, while Wikipedia is running with only 208 people. You could fit the Craigslist team in a small bus: 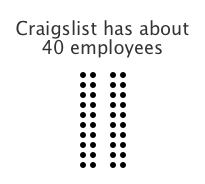 And here’s how many seconds tick by every day:

100,000 is the most random main category number of this post. In life, it mostly comes up as a salary most people would really like to be making. It’s also getting very close to the largest number of people I can actually picture all together in one place. Michigan Stadium (The Big House) is just under 110,000, and the largest stadium in the world is India’s Salt Lake Stadium, with a capacity of 120,000. North Korea claims that its Rungnado May First Stadium holds 150,000 people, but North Korea also says that Kim Jong Il shot 11 holes-in-one on his first time trying golf so we’ll be sticking with Salt Lake Stadium as the world’s largest.8

Equal to the capacity of the world’s largest stadium is the number of abortions that happen in the world every day, on average:

That’s about 1/3 the amount of worldwide births per day, meaning a quarter of all pregnancies that don’t end in miscarriage end in abortion. That’s about the same as the rate in the US, but in New York City, 41 of every 100 non-miscarried pregnancies are aborted. And no, this isn’t meant to be a political statement of any kind, just an interesting (and to me, surprising) statistic, so just settle down.

Good luck. See you at the bottom—

Sorry. A million dots is a lot of dots.

This image is the only way I can think of to visualize what a million or what one-in-a million actually means.

A million is interesting because it’s huge—but it’s also the smallest of the big boys, just small enough that you can still picture it or depict it on a diagram. It’s right on the border between the world we can wrap our heads around and the world of the totally inconceivable.

That red dot, if you found it, is a good thing to keep in mind next time you buy a 1-in-146 million Powerball ticket, or anytime you hear facts like one out of every 11 million airplane flights crashes. A one-in-a-million long shot is the same as rolling three 100-sided dice and trying to hit the number 63 with all three of them in one roll.

I like both the number 1,000,000 and the number 1/1,000,000, and I love any chance to visualize them. A blog post that can only fit 200 dots horizontally isn’t an ideal way to visualize a million because it makes a 1 x 25 rectangle you have to scroll down for an hour to see all of. So we’ve made a million-dot poster.

And, of course, one of the dots is red. It takes a hunt to find it,9 but once you do, you can understand exactly what 1/1,000,000 means. So one poster, two extreme numbers to visualize. You can check it out here. 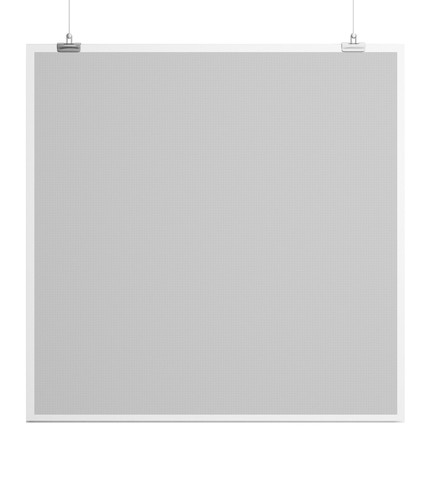 A closer shot, showing the red dot in the middle: 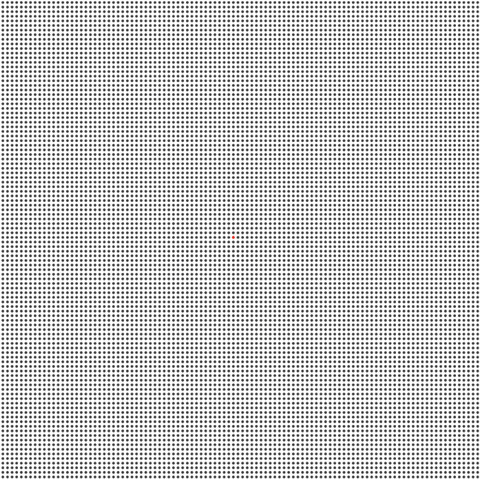 And a close-up shot, showing the red dot: 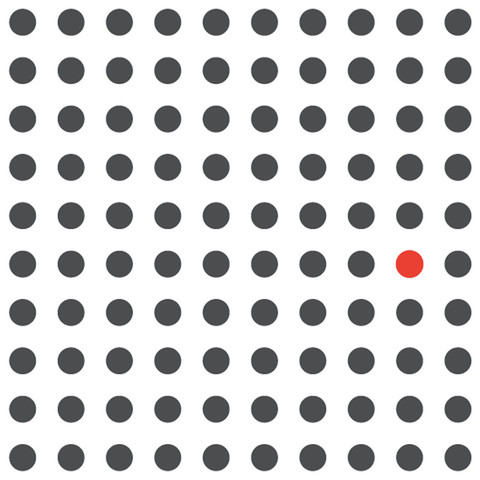 If you’re into Wait But Why, sign up for the Wait But Why email list and we’ll send you the new posts right when they come out.
If you’d like to support Wait But Why, here’s our Patreon.

Putting Time In Perspective
What Could You Buy With $241 Trillion?
What Does a Quadrillion Sour Patch Kids Look Like?